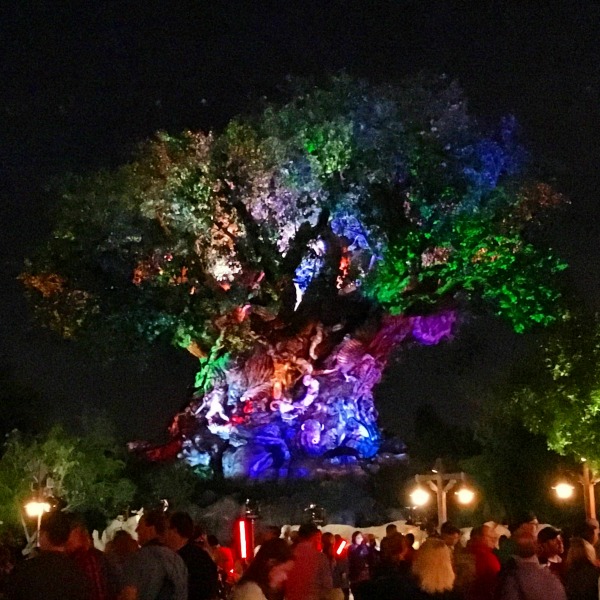 Starting Memorial Day weekend in 2016, Disney’s Animal Kingdom at Walt Disney World is going to be transformed. Ever since its opening in 1998, the park has closed by sundown. That’s all about to change on May 27, 2016 when Animal Kingdom will be open for evening hours for the first time ever.

I recently attended a press preview of the newest Animal Kingdom night offerings and was truly mesmerized. The natural and animal world takes on a whole new perspective once the sun goes down. 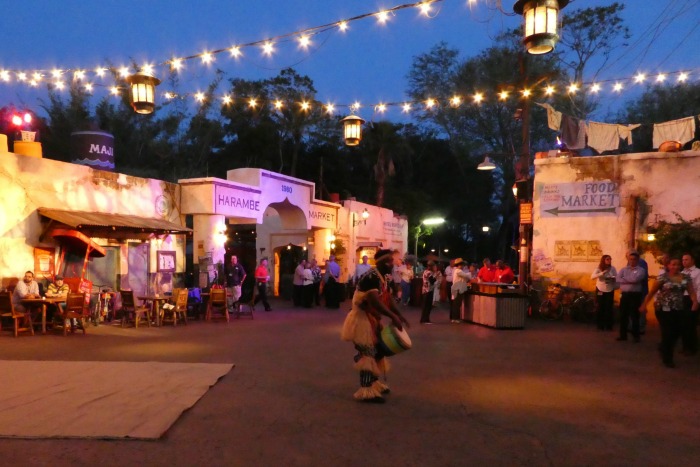 I have always viewed Animal Kingdom as a half-day (or at most, a single day) park. My family rarely spends much time there when we take an Orlando trip, much preferring the other three Walt Disney World parks. The nighttime offerings are going to be a game changer for Animal Kingdom and will offer a lot of new reasons to spend more time in the park. Here’s what you will be able to do, see, and experience in just a few short weeks. 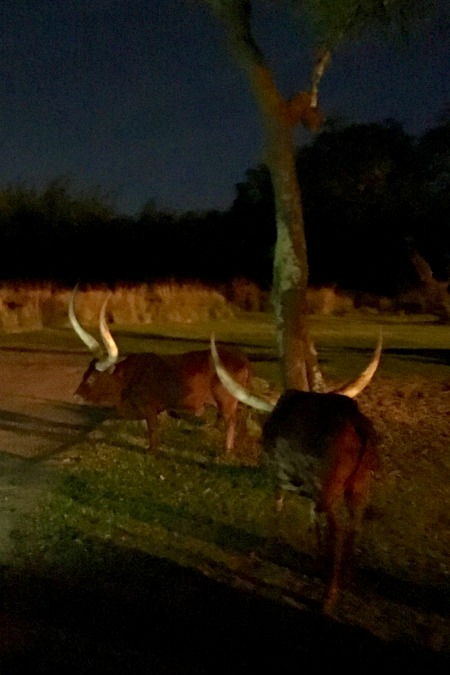 One of the must-do rides in Disney’s Animal Kingdom has always been the Kilimanjaro Safaris. These giant jeep rides will now open at night so that visitors can see many of the animals in a new light. The safari route is very dimly lit to resemble sunset so that passengers can see animals along the way. On our tour, the best visibility was of the giraffes, lions, hippopotamuses, and the ankole cattle (which were so close to our vehicle I could have reached out and touched a horn!). The best view is definitely on the left side of the vehicle. I’d also recommend putting your camera away and just enjoying the ride unless you are a serious photographer – the combination of super-low light and the constant motion of the vehicle won’t make for great casual photos. 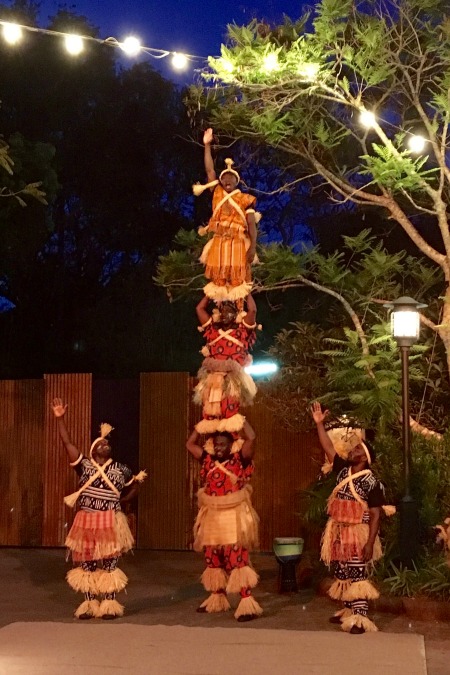 Harambe Market – an area in the Africa section of the park known for its street performers – will be just as active at night with multiple new entertainment acts. During my visit, I was able to preview a full performance of the Harambe Village Acrobats and even join them for a dance! The talent on display is awe-inspiring and very different from what Disney usually serves up. Definitely check the times guides and catch a few acts.

The centerpiece of Disney’s Animal Kingdom is also going to look quite a bit different after dark. Much like the Magic Kingdom’s castle comes alive during the Kiss Goodnight with special projections at park closing, the Tree of Life will come alive with projections of its own. The tree contains the carvings of over 300 animals visible by day. At night, these carvings “come alive” in light and dance on the tree. 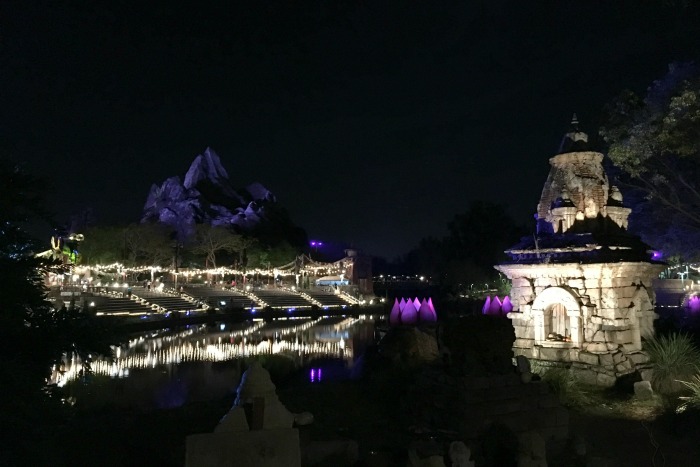 Expedition Everest is one of Disney’s very best coasters. I didn’t think it could get any better … until I experienced it in the dark! Much of the coaster is located in a pretty isolated corner of the park so that means very little ambient light intrudes on the track. It was pitch black – even more so than Space Mountain – which translated into serious thrills. Don’t miss this ride at night if you are a roller coaster junkie. 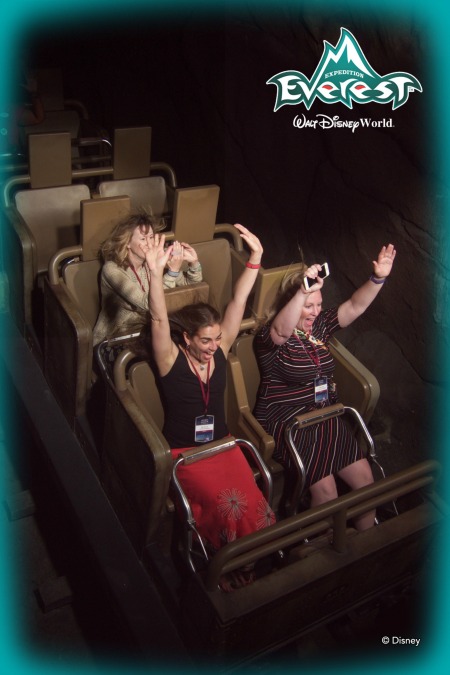 Riding Expedition Everest with Gina from Kids Unplugged and Angela from Traveling Karma.

Last but not least, the final piece of the nighttime experience at Disney’s Animal Kingdom will be the new night show, Rivers of Light. While all the other Animal Kingdom offerings will open on Memorial Day weekend, Disney has yet to announce a definite opening date for Rivers of Light, so keep watching Disney news for more information.

I was able to preview a portion of Rivers of Light during my visit, and I think it is safe to say that good things will be coming to those who wait! The show is ambitious and beautiful, using fountains of water from four floating lotus flowers, screens displaying animal projections, lanterns, and live action performers all in harmony to create a visually stunning display. But don’t take my word for it… get a 3 minute sneak peek yourself in this video:

One final word about Rivers of Light. While you’ll probably be oohing and aahing over the visual scenery, I also greatly appreciated Disney’s attention to the practical in designing this show. Disney shows are very popular and can present crowd problems, but Rivers of Light offers so many viewing areas in the park that will hopefully mitigate that issue. There are stadium style seats directly in front of the show as well as several vantage points to watch overlooking the water on the sides. A lot of eyes will be able to see this show when it is finally ready!

What are you most looking forward to at Disney’s Animal Kingdom at Night?

Disclosure: I was an invited guest at Disney’s #AwakenSummer media event in April 2016 to preview the Animal Kingdom nighttime offerings. No compensation was received for this post. As always, all opinions are my own!