Welcome to this month’s Blogorail Orange Loop. Today we are comparing Walt Disney World and Disneyland. 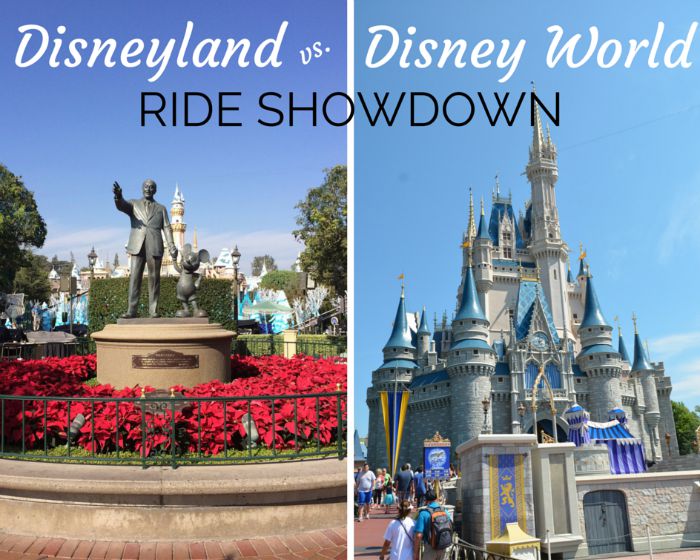 There are a number of attractions at both Walt Disney World and Disneyland that share a theme and a name.  To the casual Disney visitor, these rides may seem to be identical.  Die-hard Disney fans know, however, that many of these rides have a variety of differences, some of which are pretty significant.

Having recently visited both Disneyland and Disney World, I made sure to make special note of all the differences I could spot on these similar rides, particularly within the Magic Kingdom and Disneyland park where many of the rides have an equivalent ride in the other park.

Not one to shy away from controversy,  I’m declaring some winners and some losers in the epic Disneyland vs. Disney World battle.  Some of the rides are simply much better at one park rather than the other.  Here’s what you need to know before you go. 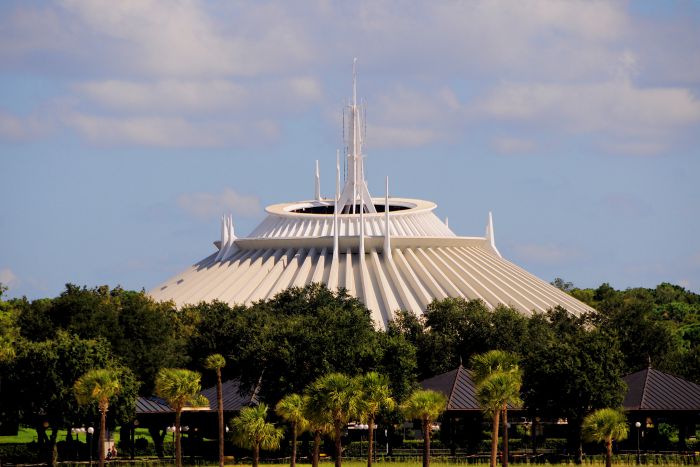 Both are exciting and thrilling rides, but I’m declaring Walt Disney World’s version of Space Mountain as the winner.  Why?  I found Space Mountain at Disney World to be much darker, which adds to the thrill.  On the Disneyland version of the ride, I can often see the track in front of me (especially in the front seat), which takes away some of the mystique. 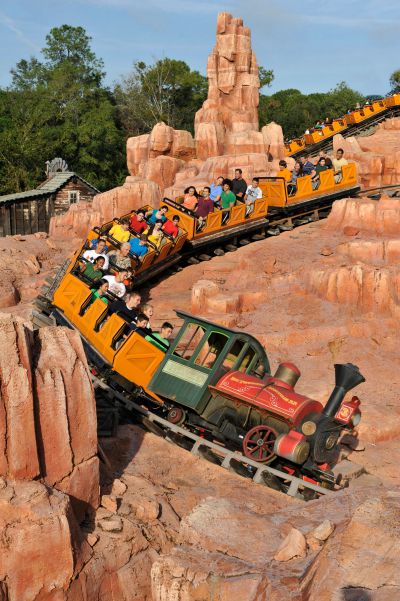 For a long time, Thunder Mountain at both Disneyland and Disney World was a very similar ride.  But Thunder Mountain in Disneyland received some upgrades in 2014, so this isn’t exactly a fair fight any longer.  The ride at Disneyland now features a new track and special effects like shaking rocks that make the ride much more thrilling and modern.

One more thing also tips the scales in favor of the Anaheim version of Big Thunder: the queue for much of the Walt Disney World version of the ride is in the hot Florida sun in an area that simply radiates heat.  Disneyland has it made in the (relative) shade. 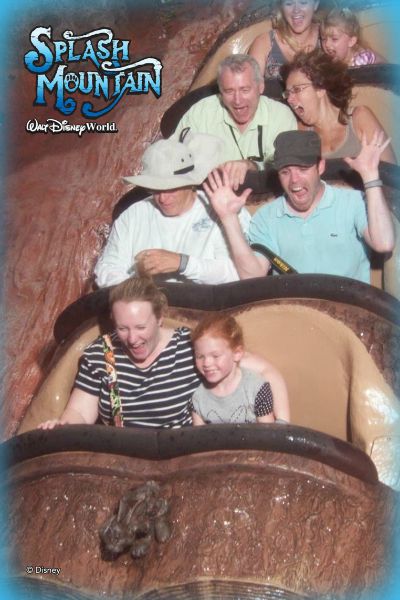 The big drop on Splash Mountain at Disney World.

As with Space Mountain, the seating configuration of Splash Mountain is quite different in the Disneyland and Disney World versions of the ride.  Walt Disney World seats riders side-by-side while Disneyland’s version is bobsled style.

While Disneyland boasts a steeper final drop at the end of the ride, I’m declaring Walt Disney World’s version the winner because of 1) the superior animatronics on the ride (the ride is newer at Walt Disney World and was able to make use of better technology) and 2) the usually shorter wait due to higher ride capacity.

This is a close one, so I’d say reasonable minds could differ! 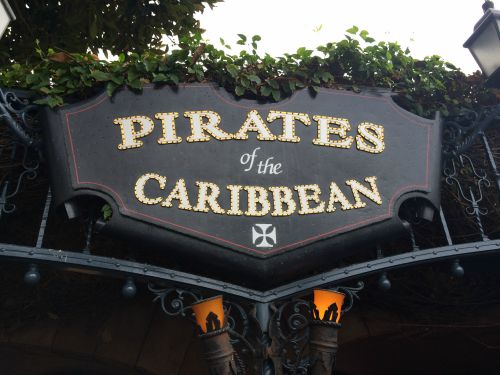 Pirates of the Caribbean

The winner in this Disneyland vs. Disney World battle is the clearest of the bunch.  The Disneyland version of Pirates is just much, much, much better.  The ride is longer, larger, and more thrilling with two drops instead of one.  There are entire scenes in it you won’t find at Walt Disney World.  Plus, it is a Walt original (the last ride overseen by Walt himself before his death).

In addition, the Disneyland version starts out with a cruise by the beautiful Blue Bayou restaurant (a spot where my husband and I always schedule a Disneyland date night).  The serene bayou atmosphere of the restaurant sets the stage perfectly for a ride filled with thrills!

The Disneyland version of Peter Pan may win for history and nostalgia, but the reality is that Disney World wins overall for its newer and improved version of the ride.  Disney World’s version is longer and higher capacity, making for shorter wait times and a bigger ride time payoff after a long wait.  In addition, Disneyland’s opening scene flying over London is very dark and doesn’t quite convey the magic that its better-lit counterpart at Walt Disney World does.

(In all fairness, I have not yet gotten to ride the improved Peter Pan in Disneyland that just opened July 1, 2015 featuring new special effects for #Disneyland60, so I would love to hear if this attraction showdown is now a closer call.) 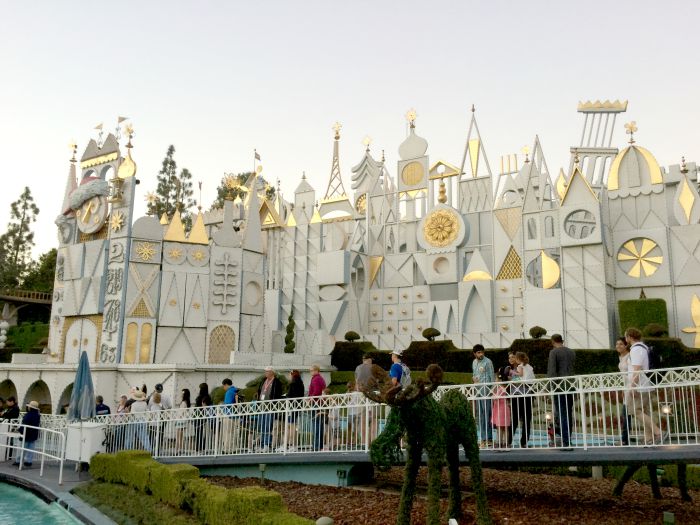 By far the better version of it’s a small world, at Disneyland.

it’s a small world in Disneyland is the original version of the ride that Walt Disney developed for the 1964 World’s Fair, so it is the clear winner.  It’s also longer and more elaborate than its Disney World equivalent, with a superior location and façade.  This one is a no-brainer! 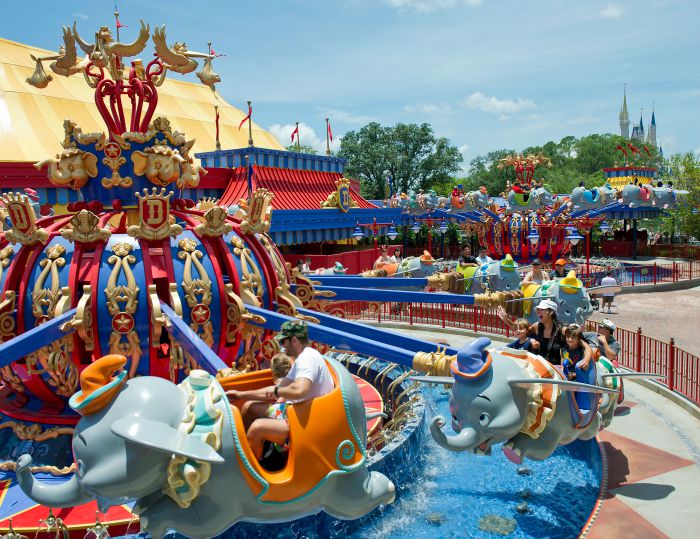 Thanks to the complete overhaul of Fantasyland and creation of Storybook Circus in Walt Disney World, Disney World’s Dumbo is now twice the size of its Disneyland equivalent.  Everyone likes shorter wait times with double capacity, right?

But another huge advantage of Dumbo at Walt Disney World is its interactive queue.  Even when wait times get long, kids can play in the shade and enjoy the fun while they wait. 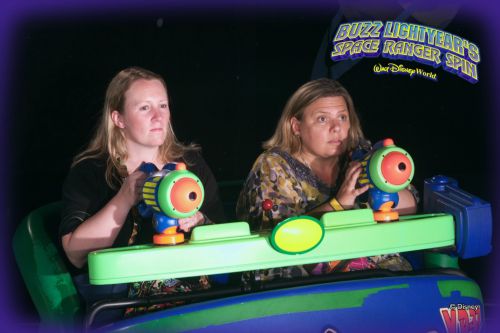 The scenes in these two rides are nearly identical, but Disneyland’s version (Buzz Lightyear Astro Blasters) wins for one major reason: you can pick up your blaster which connected only by a cord.  The Disney World version of the ride (called Buzz Lightyear’s Space Ranger Spin) has the gun affixed to the vehicle which makes shooting more challenging.

In addition, the Disneyland version includes differently-shaped targets (squares, circles, diamonds, and triangles) that award you different points for hitting them.  This makes the Disneyland version a smarter game with more strategy because you have to decided whether to shoot at harder targets that may be worth more points or go for the easy ones. 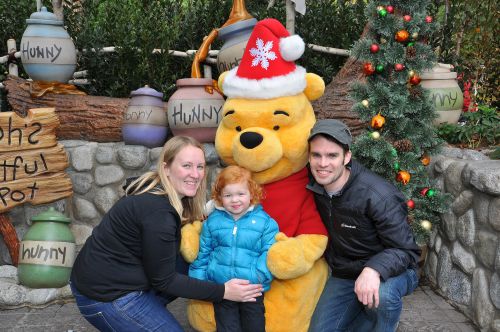 Posing with Winnie after riding his ride 5 times.

The Winnie the Pooh rides themselves are fairly similar, so it is hard to make a call.  Walt Disney World’s version has a more convenient location in the heart of Fantasyland in the Magic Kingdom.  But I have a hard time forgiving Pooh for being the cause of one of my favorite Disney World rides being demolished (Mr. Toad’s Wild Ride).  The advantage of Disneyland’s less convenient location all the way over in the depths of Critter Country is that lines are usually shorter.  That’s great if you have a 2 1/2 year old (like I did a few years ago) who wanted to ride Pooh 5 times… in a row.

But I’m calling this a draw.  Serious Disney fans know that there can’t really a winner here between Disney World and Disneyland.  The best version of the Pooh ride is in Japan at Tokyo Disneyland, where the ride features much more impressive technology. 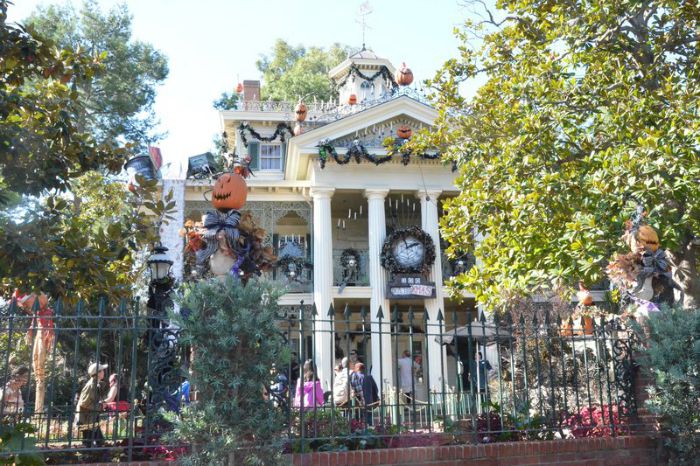 Disneyland’s Haunted Mansion during the holidays.

The Haunted Mansion is a fairly similar ride at both Walt Disney World and Disneyland on the inside.  But the rides are quite different on the outside.  Disneyland’s version is set in New Orleans Square and looks like a Southern mansion.  Disney World’s version is in Liberty Square and matches its colonial architectural style with dark brick and small windows.

Disneyland’s version of the Haunted Mansion could be better or worse depending on your feelings about Tim Burton.  During the holidays (from October through the New Year), the ride gets a special holiday overlay based on the movie The Nightmare Before Christmas.  Disney fans are quite split on this.  I have to say I was a skeptic the first few years, but now really enjoy and look forward to the holiday version of this classic Disney ride.

As you can see, this battle pretty much ends in a draw.  Disneyland and Disney World both have an equal share of superior versions of certain attractions.  You’ll just to have to visit both to experience them for yourself.  What is the superior park?  The debate continues….

Do you agree with my winners?  Are there other differences you’ve spotted in these rides?  There are a few comparisons I didn’t get the chance to make (most notably Jungle Cruise and King Arthur Carrousel/Prince Arthur Regal Carrousel and I’d love to know your thoughts!). 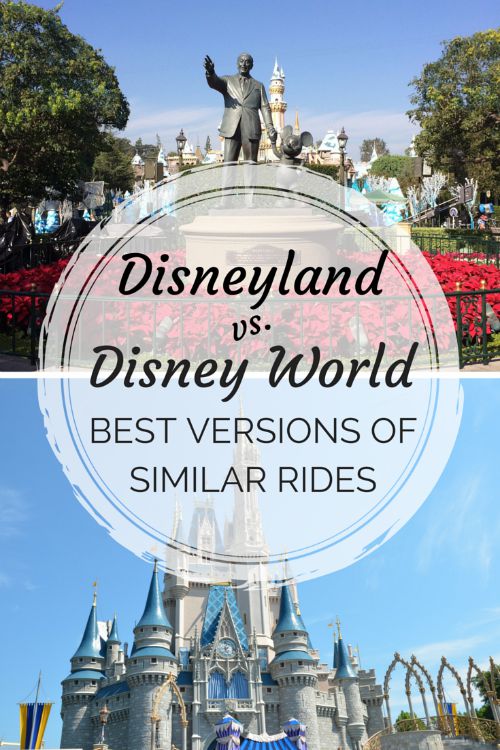 For more information on Walt Disney World vs Disneyland,
check out the other great posts from the Blogorail!

Here is the map of our Magical Blogorail Orange | Walt Disney World vs Disneyland Loop:

Thank you so much for this post! I'm recently going to Walt Disney World so knowing this will help me plan better!

I agree on everything except on Space Mountain. I am a little skeptic about that one but I still give it props for being the larger, original Space Mountain. Although I have seen the DL Pirates Ride and agree that it's better than Florida's I have to give props to Florida for having a big time better themed queue because it's based on Castillo del Morro (an actual fort in the caribbean built in centuries past) and it is probably the most iconic thing of the Caribbean. Trust me, it is on the island I live in ^^

[…] rides at Disneyland are simply superior to their Disney World equivalents. Pirates of the Caribbean fans know that the ride is longer, more thrilling, and starts with a much […]

Disneyland's Winnie the Pooh is much better because it has a shorter line because it's hidden away.