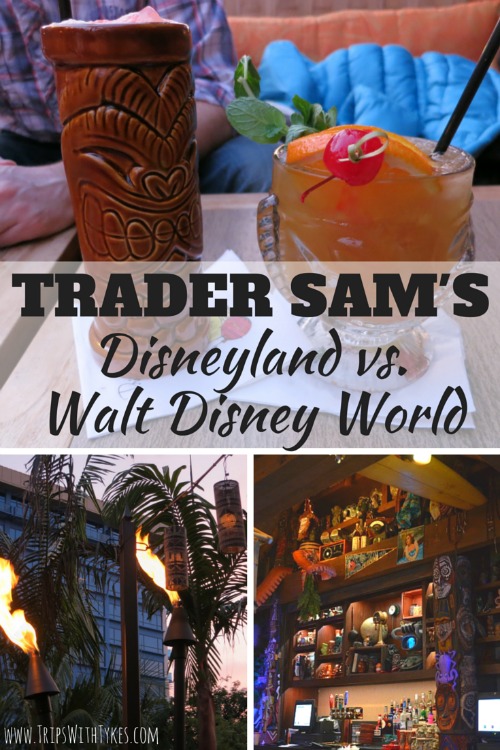 Disney and Hawaii have a long history together.  Walt Disney visited the islands multiple times and first incorporated Hawaiian culture into his 1937 Mickey Mouse short film, Hawaiian Holiday.  You can see Hawaii’s influence on Disney throughout Disney history in attractions like the Enchanted Tiki Room, hotels like Aulani and Disney’s Polynesian Village Resort, movies like Lilo and Stitch, and in everyone’s favorite Disney snack, the Dole Whip.  For someone like me who loves a Hawaiian vacation as much as a Disney one, the pairing is a match made in heaven.

A newer addition to Disney’s Hawaiian-inspired lineup has been the opening of two tiki bars in Disney’s two U.S. resorts.  Trader Sam’s Enchanted Tiki Bar opened in Anaheim at the Disneyland Hotel in May 2011.  Earlier this spring, Disney opened a close cousin, Trader Sam’s Grog Grotto, in Walt Disney World’s newly-renovated Polynesian Village Resort.  If the Trader Sam name sounds familiar, that’s because both are named after the infamous headhunter character from the Jungle Cruise.

As a frequent visitor to Disneyland’s Trader Sam’s, I was excited to check out the Florida version during its soft opening this April.  Here are the details and differences between each Trader Sam’s location and what you can expect during a visit to either one. 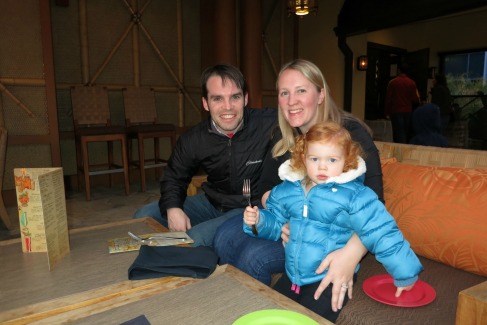 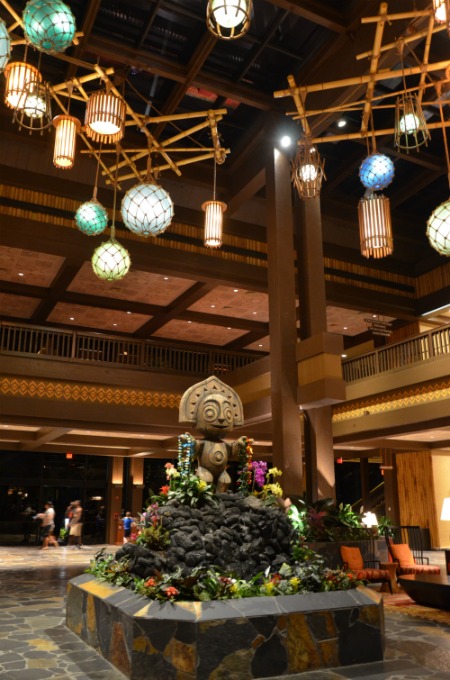 Both Trader Sam’s have hotel locations so a park ticket isn’t necessary to visit either one.  For that reason, I’d recommend making time for a Trader Sam’s visit during a non-park day such as the first night of your arrival.  The Trader Sam’s experience is one you want to savor!

The Trader Sam’s location in the Disneyland Hotel is right in the middle of the hotel’s main courtyard.  You’ll have to look around a bit more to spot the Trader Sam’s in the Polynesian, as it is a bit more tucked away.  After passing through the lobby, weave your way towards the back left of the hotel to find the secret door to enter.  When all else fails, just follow the crowds.  Both bars are extraordinarily popular.

Anaheim’s Trader Sam’s location serves lunch, dinner, and late night snacks, as it is open from 11:30 am until 1:30 am daily.  As of this writing, Trader Sam’s in Orlando has shorter hours than its Anaheim counterpart.  Open only from 4 pm to midnight,  you’ll encounter long lines with everyone trying to make time for a visit during the limited hours.  With the Magic Kingdom open until midnight (2 a.m. during Extra Magic hours) on many Saturday nights, don’t expect to be able to grab a drink after returning to your hotel for the night.  I hope that Disney soon considers slightly longer hours for night owls in Florida.

For those who want to bring kids along to Trader Sam’s, the good news is that you can.  But only before 8 pm when it becomes a 21 and up only. 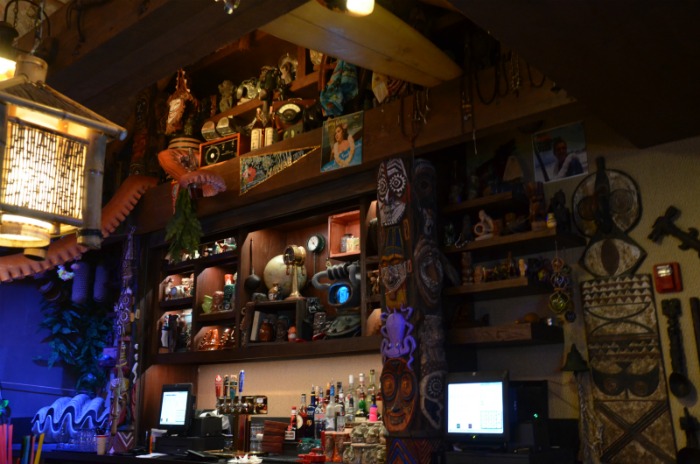 The interiors of both bars are visually stunning and worth sneaking a peek even if the real draw for you is the drinks.  While both bars are dominated by Hawaiian and Polynesian decor, there are subtle differences in the two locations.  Disneyland’s Trader Sam’s borrows from local attractions like Indiana Jones for some of its adventure based decor.  Walt Disney World’s version borrows more heavily from the classic but now defunct Disney attraction 20,000 Leagues Under the Sea and the book upon which that attraction was based.

Both bars have visual effects that spring into action when certain drinks are ordered.  The drinks are pricey but at least you are getting interactive entertainment for your money.

The new Orlando Trader Sam’s feels more spacious in its layout but it still quite tiny, seating only 51 (Disneyland seats 47 but I’d venture a guess that the square footage is smaller).  Wait times can be long and pagers are handed out to hold your place in line.  I faced a two hour wait on a spring Saturday night in Orlando when a friend and I arrived for an after dinner cocktail.  I don’t expect that the busy summer schedule will bring anything much shorter. 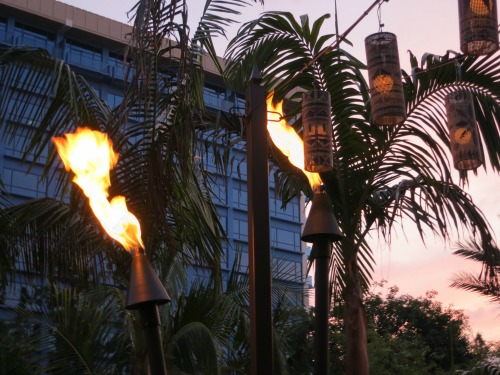 View from the outdoor terrace at Trader Sam’s in Disneyland.

Because the interiors of both bars are so small and quickly reach capacity, both Trader Sam’s locations also have patios that serve the same menu as the indoor space.  Most of the seating at the Disneyland location is outdoor couches and lounge chairs with low tables, and they fill quickly.  The Tiki Terrace in Orlando has more seating, as it features mostly tables with umbrellas that take up less space.  I had no trouble grabbing an open table even at 8 pm on a Saturday night.  In contrast, I’ve always had trouble on weekend evenings getting outdoor seating in Disneyland.

The outdoor space at Disneyland’s Trader Sam’s carries over some of the Aloha spirit.  Tiki torches set the mood at night and there is often live music playing.  The outdoor space overlooks the hotel’s pool (complete with a water slide shaped like a Disney monorail).

The outdoor space at Walt Disney World overlooks the Seven Seas lagoon and the Polynesian beach.  A solo musician playing Hawaiian classics played for some of the time we were there on a weekend evening and set the mood.  We found the outdoor spot to be an amazing vantage point to watch the Magic Kingdom’s nightly fireworks show, Wishes.  The soundtrack to Wishes plays over speakers on the Terrace, making for a magical evening.  You can get a sneak peek of the Wishes show in my video tour below.  (This video was shot with the Panasonic A500 wearable camera, which was provided to me on a complimentary basis for review purposes.  The camera is amazingly versatile – we took it on Disney thrill rides and it is even waterproof to 10 feet!). 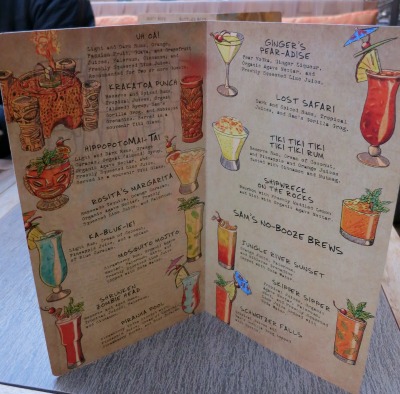 While the food is always delicious, I have always found the menu at the Disneyland Trader Sam’s just a bit sparse.  It turns out, however, that Walt Disney World’s version has even fewer food choices (probably due in part to the more limited hours of operation).  At Walt Disney World, it is appetizers only so be prepared to order a few or eat dinner in advance.  Disneyland has a more filling pu pu platter as well as several sandwiches so it is easier to make a meal out of a visit there. 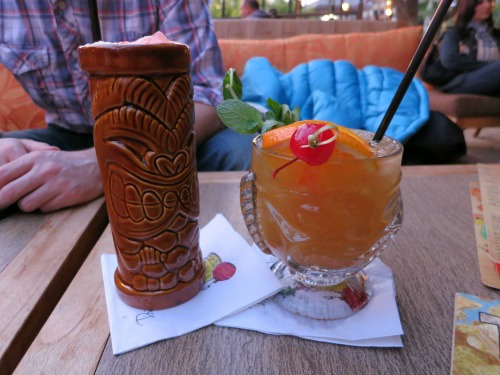 Trader Sam’s cocktails in Disneyland – complete with my mai tai.

But let me be honest: who needs food when there are amazingly delicious and strong rum drinks to be had?  Many of the drinks are the same.  For example, you’ll find the classic (and my favorite) HippopotoMai-Tai at either location.  There are nevertheless a few drinks exclusive to each location.  The truly signature drink at Walt Disney World is the Nautilus that comes in a ceramic bowl shaped liked Captain Nemo’s submarine.  Start saving your pennies now because it will set you back $52! 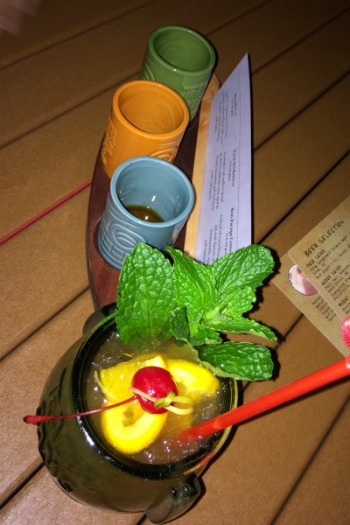 I ordered the mai tai again in Disney World!

Drinks at Trader Sam’s come with souvenir glasses included (hence the high price of most).  Before you commit a Trader Sam’s faux pas, be aware that you actually don’t walk away with the glass you are served.  As you settle up your check, your server will bring you a clean and boxed up glass that makes for easier packing to take home.  It’s a nice touch that reflects Disney’s attention to minor details.

I’m not prepared to declare one Trader Sam’s location the winner in this tiki bar face-off.  Both are definitely worthy of a visit on your next Disney vacation.

[…] of the South Pacific (think Tiki Room), and Disney has continued that tradition in places like Trader Sam’s and Aulani and in movies like Lilo & Stitch. Moana is the perfect piece to add to that puzzle, […]

Sams in Anaheim is more geared towards being a bar. It is a true tiki bar with bartenders that really do their homework. Grog grotto is a show bar focused on more disney magic than mixology. Both are wonderful just different.

[…] for a casual bite to eat near the pool. But the crown jewel of the Disneyland Hotel is definitely Trader Sam’s Enchanted Tiki Bar next door. The mai tais are expensive but worth every penny, especially since most drink prices […]