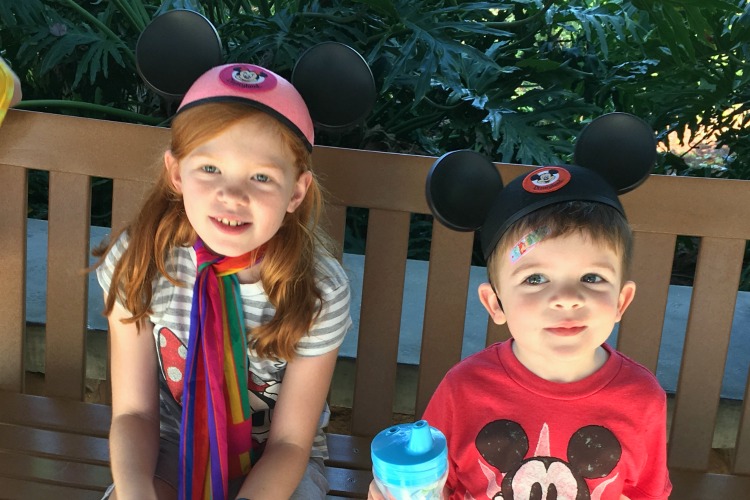 Ride-sharing services like Uber and Lyft are a major time and money saver in my travels. When I travel solo or with my husband, both apps get major use. When it comes to using Uber and Lyft with our young kids, however, things get more complicated. As a parent of an almost 8 year old and a 3 year old, we need at least one car seat to ride safely. Ride-sharing services rarely can provide those. We often take Uber or Lyft to and from the airport when we have our own car seats with us, but using them other times when we’d have to carry a car seat around at our destination just doesn’t work.

Luckily for families, Orlando is one of the very few cities in the country where you can request a car seat with your Uber. In New York, Philadelphia, and Washington DC, the service was initially called “Uber Family,” but now it is known as Uber Car Seat. Orlando was the 4th city added to this program about a year ago, with the Walt Disney World area a major focus (you can also find it easily around Universal and Sea World as well). The program works a little differently in Orlando than it does elsewhere.

I’ve taken both Uber and Lyft extensively around Orlando on past solo trips. But most recent trip to Disney World marked the first time I had kids in tow and no car. So, it was time to test it out! 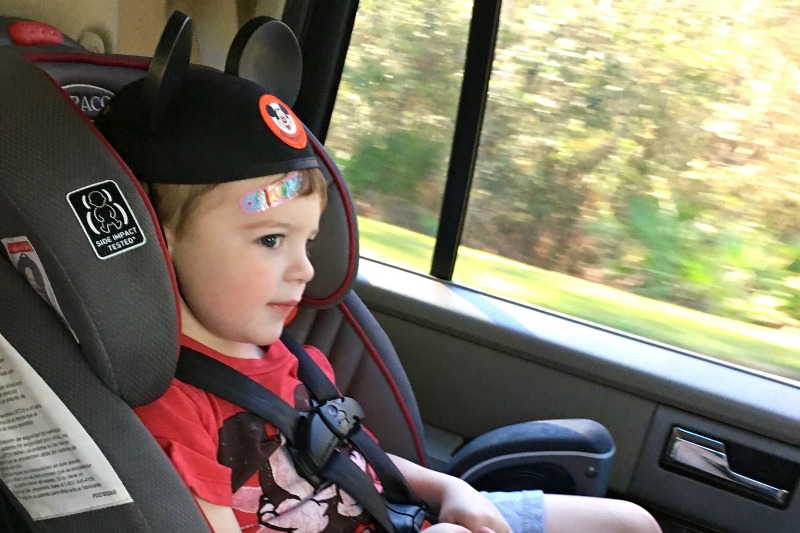 My family took Uber Car Seat from Port Orleans Riverside to the Polynesian on our way to a character breakfast at ‘Ohana. As Walt Disney World experts know, using Walt Disney World transit from hotel to hotel is a very time-consuming process that requires a connection, so this was a huge time savings. I also had the chance to monitor Uber Car Seat’s availability and pricing in the app throughout our time in Orlando.

My verdict? Uber Car Seat is a great option for families who only need to take a car service a few times around the resort area who don’t want the hassle and cost of a car rental. Here are the essential details you need to know about Uber Car Seat around Walt Disney World and Orlando.

How Do I Request Uber Car Seat on a Walt Disney World Vacation?

There’s nothing special you need to know to find Uber Car Seat in Orlando. If you can use Uber, you can use Uber Car Seat. On the Uber app, simply log on and enter where you want to go on the first screen. On the second screen, a variety of car types will appear – swipe right or left to toggle between them to see the prices and passenger counts for each. In Orlando, options will include both “UberX + Car Seat” or “UberXL + Car Seat.” Select one and use Uber the way you always do from there. 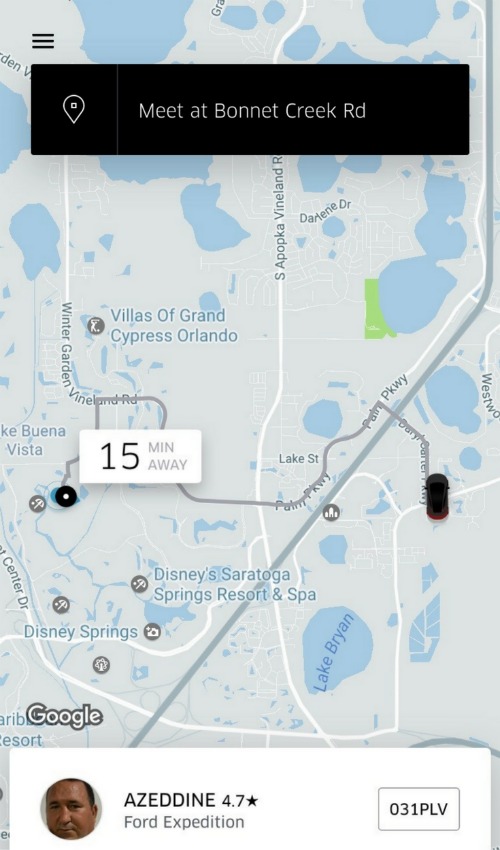 (If you are new to Uber, see my guide to Lyft and Uber with kids with more detailed app use instructions. And if you want to support Trips With Tykes, you are welcome to use my referral code. Use promo code 7u9vi for Uber to get $20 off your first ride. Please note that these offers change regularly but they are current as of 2/21/2017.)

Pricing is clearly visible on the app, but expect to pay $8 more over the regular pricing for either an UberX or UberXL for the extra addition of a car seat. Given how cheap Uber is in Orlando, the service still remains extremely price competitive even with the car seat upcharge.

(Editor’s Note: As of July 1, 2017, UberX – and standard Lyft cars as well – are now allowed to pick up at Orlando International Airport – finally! So if you would like to take Uber Car Seat from MCO, it is an option now too. See my complete guide to flying to Walt Disney World for more information.)

As much as I liked the service, there are always a few caveats parents need to know about and consider before using a service like Uber Car Seat. 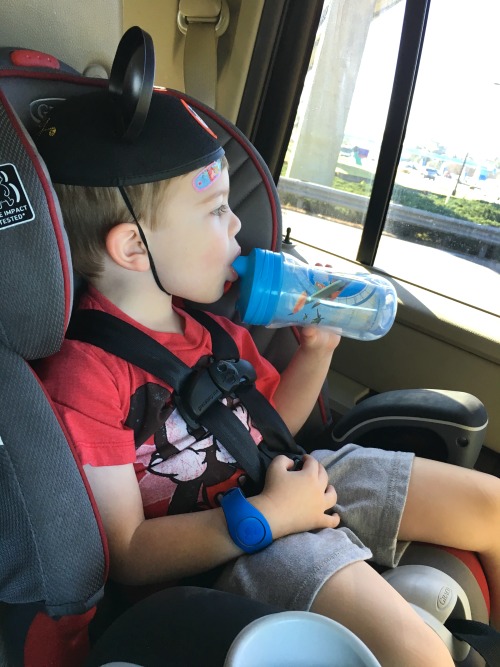 Safety. Just as with any car seat that it not your own, you will not know its history – whether it has been in an accident, whether it has been properly maintained, etc.  I would say that if you are comfortable using a rental car seat from a rental car company, this is certainly at least as safe. But it is your call as a parent to make, just like any other calculated risk in life. Judgment free zone here (because I know car seats tend to bring a lot of parent judgment!).

I grilled our Uber Car Seat driver during our ride to get the inside scoop for concerned parents to help you make an educated decision. He said that the process for becoming an Uber Car Seat driver definitely required quite a few hoops to jump through, so that was reassuring. Our driver had to buy a new car seat that was one of several specified models (he had a Graco but I didn’t notice the exact model). He had to send in photos of the seat both outside and inside the car to demonstrate compliance and to show that it would fit in his vehicle. So, at least there is somewhat of a hurdle for drivers to clear.

Installation Struggles. You may not also be familiar with how to install the car seat in question. As a parent of 2 kids who has probably installed a dozen different car seat models in my day, I found the model our driver had a breeze to install with the seat belt. He actually put it in the car and buckled the belt, while I adjusted it for a tight fit and locked the belt off. It was easier than several of the models I have back home.

One Car Seat Only. Uber Car Seat also only works for families with one child of car seat age. There are no cars available with two or more seats.

Florida law only requires that children be in car seat or boosters up until age 5 so it is a more lenient state than many. That said, many parents strongly prefer that their 6, 7, and 8 year olds in a car seat or booster. If this is your situation, I’d suggest bringing along a space-saving booster like a BubbleBum or mifold if you have an older child.

How long will I need to wait? Another question most families have is whether an Uber Car Seat will even be available to them when they need it without a long wait. During our visit in February, I was relieved to find very reasonable wait times and availability.

I logged onto the app at different times on several different days and found that I could expect a 7-8 minute wait for an UberX but only a few minutes more for an UberX with Car Seat – often 12 minutes or so. Not enough of a difference to make a difference. I never saw a situation when a wait for an Uber Car Seat was any longer than 15 minutes. That was a huge relief to me to know that the service was fairly reliable so I would never be stranded. That said, expect greater demand over popular school holiday periods like spring break and summer. I’ll continue to monitor availability to keep readers informed. 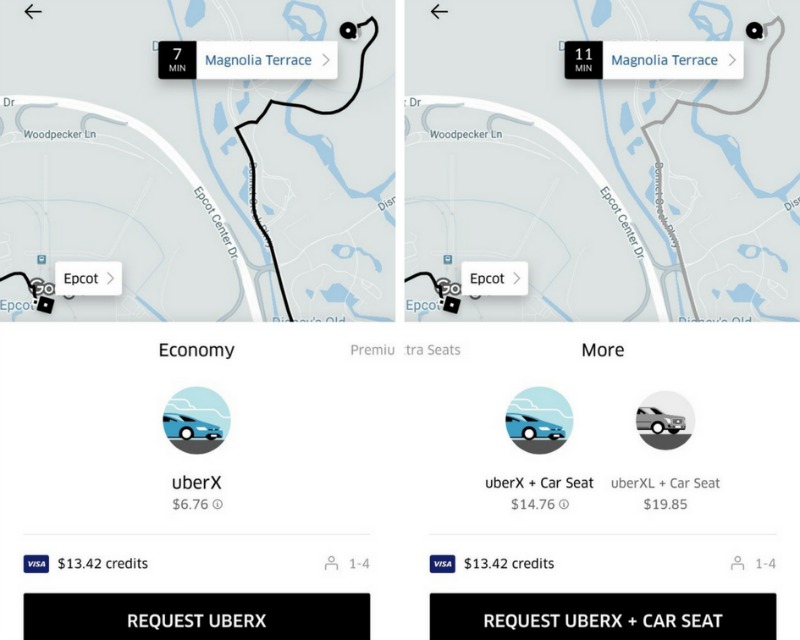 One wait time example – same route at the exact same time. UberX wait was 7 minutes and only 11 minutes for UberX + Car Seat.

Babies and Rear-Facing. Finally, Uber Car Seat Orlando may not necessarily always work well for infants. The car seat model we personally experienced was a Graco convertible car seat that I’m fairly positive could be installed rear facing with younger infants, but there is no guarantee of that as far as I know. In short, your miles may vary when it comes to safe transport of younger babies. The same goes for older children who may be too big for certain models that drivers may have. Kids ages 2-5 years old appear to be the sweet spot.

Have you taken Uber Car Seat in Orlando? What were your experiences? 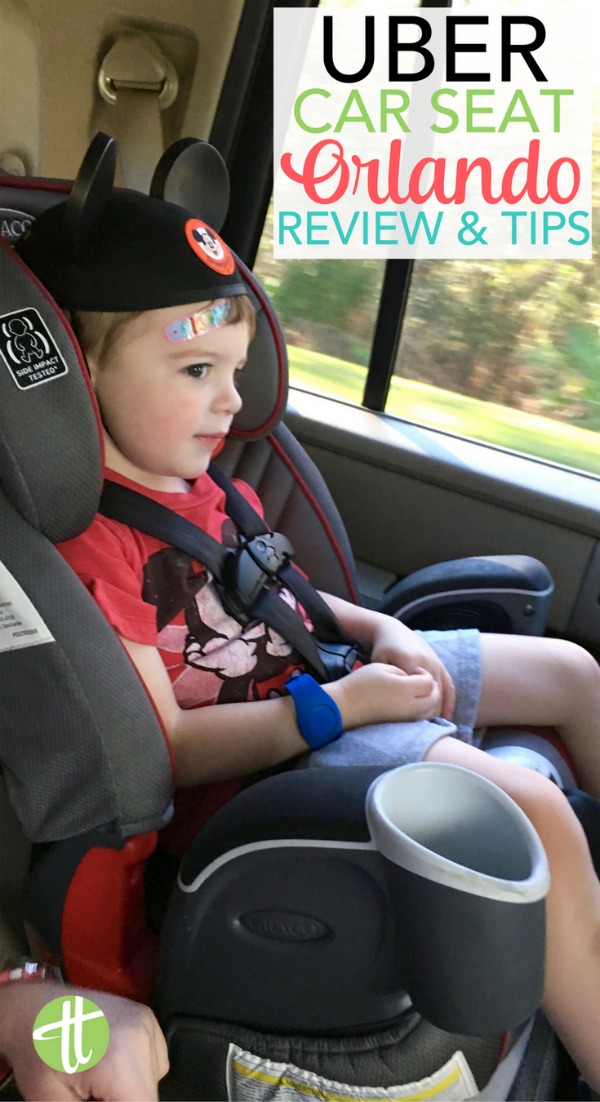 You’re an angel!!! Thank you so much for the helpful info, my friend’s toddler needs a carseat, and we are flying from Canada! Thank you again ♥️

THIS INFORMATION IS OUT OF DATE. UBER NO LONGER OFFER UBER FAMILY IN ORLANDO AND THEY HAVEN'T FOR AT LEAST A FEW YEARS.

I looked into it and Uber used to have their uberFamily car seats program in Orlando but they no longer do. It's confusing, but there is still an option to try to get an uber with car seats in Orlando, but it seems to be only one car seat and it may not always be available. I tried a search now and there are currently no ubers with a car seat there now.

Thanks for all the info. This was very helpful I live in California and have heard of them being out here but still haven’t seen it on the Uber app. Maybe it depends on the time and location. Going to Orlando next month and wanted to be sure I can get a ride Universal since Disney Resort will only offer rides to Disney parks.

Hi... All this information is super helpful. Traveling with our two year old next month. I was wondering if you have any information about Uber Car Seat availability at midnight. Our flight arrives at 11:30pm. I made a transportation reservation but I don't think they have car seats...I am looking to see if using Uber Car Seats is a better option... just want to make sure there will be availability at that time.

Thank you for the article! Hope they will extend this program all over the US