As soon as you think you have Disneyland figured out, the theme park throws something new in the mix. The last several months or so at the Happiest Place on Earth have been filled with changes galore. I chronicled the new Disneyland additions in spring and summer in a guide earlier this year. With school back in session and Halloween Time just starting up in the parks, it was definitely time to update you with my annual fall and winter guide! 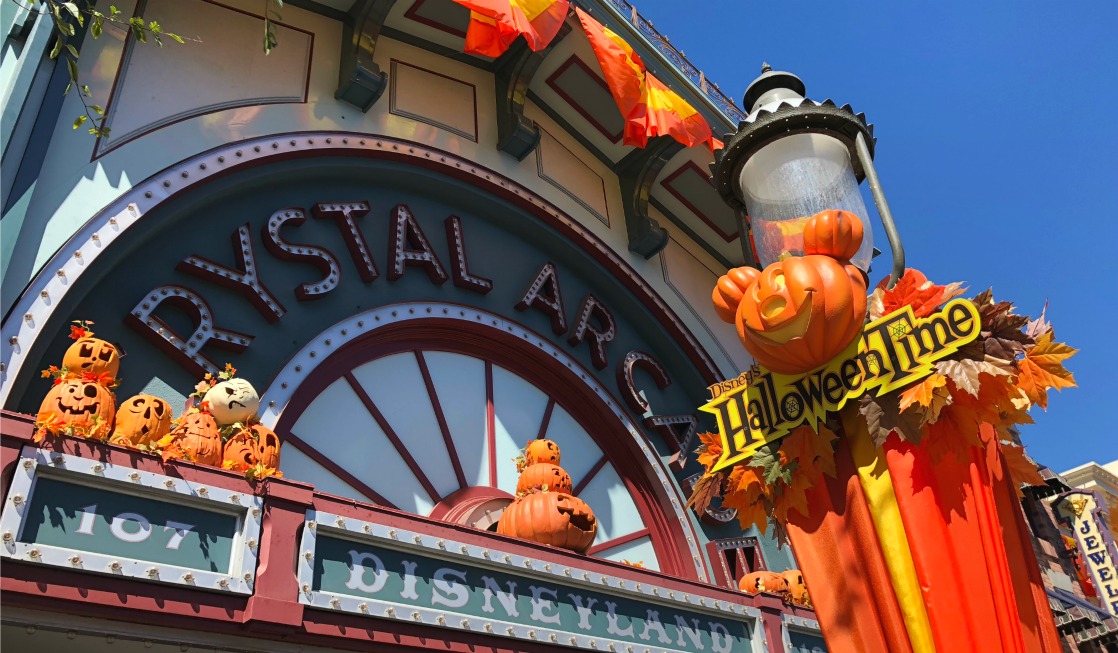 If you haven’t been to Disneyland in a few months, here is what you can expect to experience for September, October, November, and December 2018 . Plus, I’ve thrown in a few confirmed and not-so-confirmed rumored changes expected to happen in the early months of 2019 too. 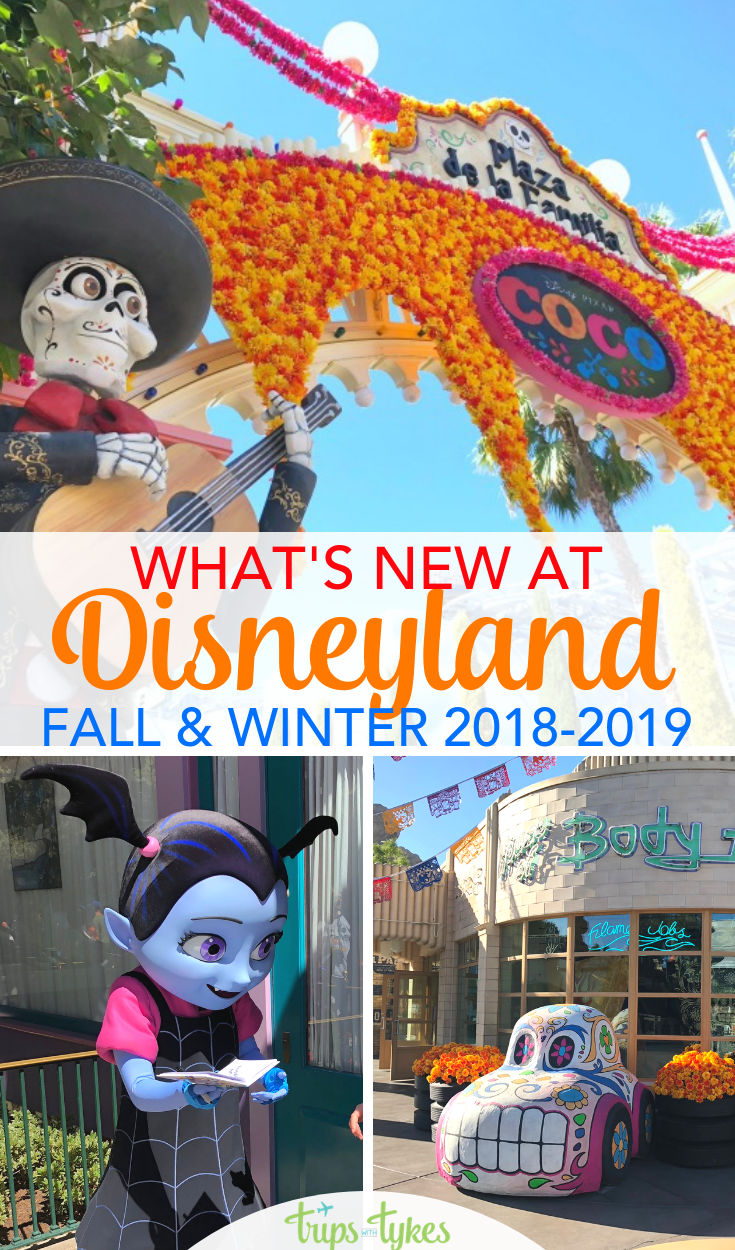 Summer Disneyland Changes You May Have Missed

So now that the money-saving is in the bag, let’s talk details. If you didn’t go to the parks during the summer, you probably missed a few major changes that took place even before fall arrived. Let’s recap those additions:

The Pixar Pier area (formerly Paradise Pier) reopened with brand new theming at the end of June 2018. Pixar Pier was very much a work in progress on opening day, and further openings like Bing Bong’s Sweet Stuff in late July continued to transform the area as the summer went on. Even more Pixar Pier attractions are expected in 2019 so you’ll continue to see construction walls and can anticipate more to come. 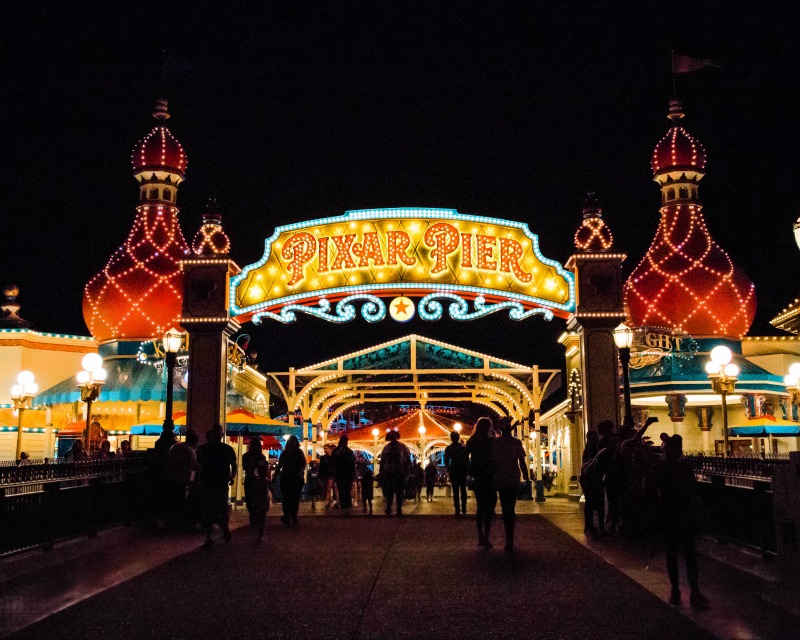 In the meantime, thrill ride lovers will enjoy the new theming on California Screamin’ – now known as the Incredicoaster. The storyline is much more compelling and the music and visual effects are fantastic.

The whole family will enjoy the new Pixar Pal-A-Round (previously Mickey’s Fun Wheel) where you can get a bird’s eye view of both parks. Just be careful of the swinging gondolas if you are prone to vertigo or motion sickness. The standard ones suited my four year old just fine. 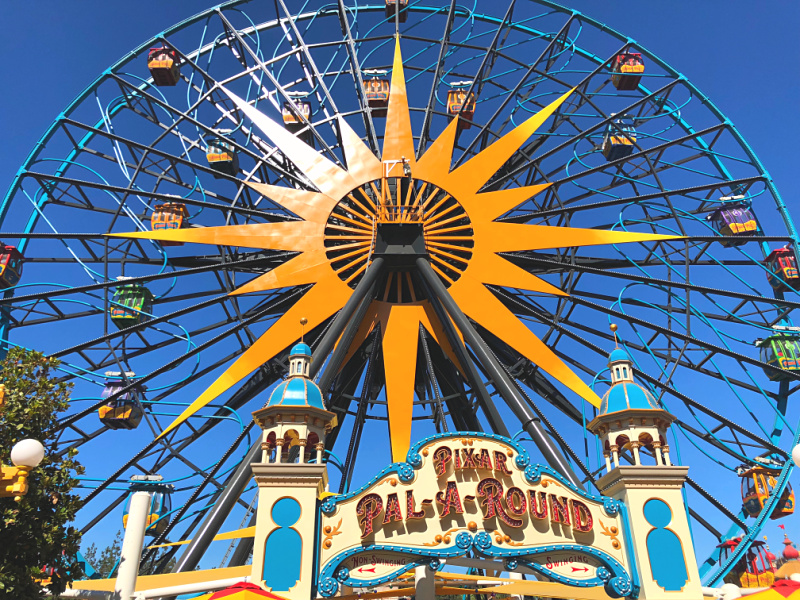 Dine at the new Lamplight Lounge (where Ariel’s Grotto and Cove Bar were formerly located), which has gotten rave reviews for its design and food. That is, if you can get a table. It’s the hottest reservation at Disneyland, but some walk up options are possible.

There are also plenty of Pixar character meet and greets at the new Pixar Pier in addition to new snacks (Jack Jack’s cookie num num being a fave). 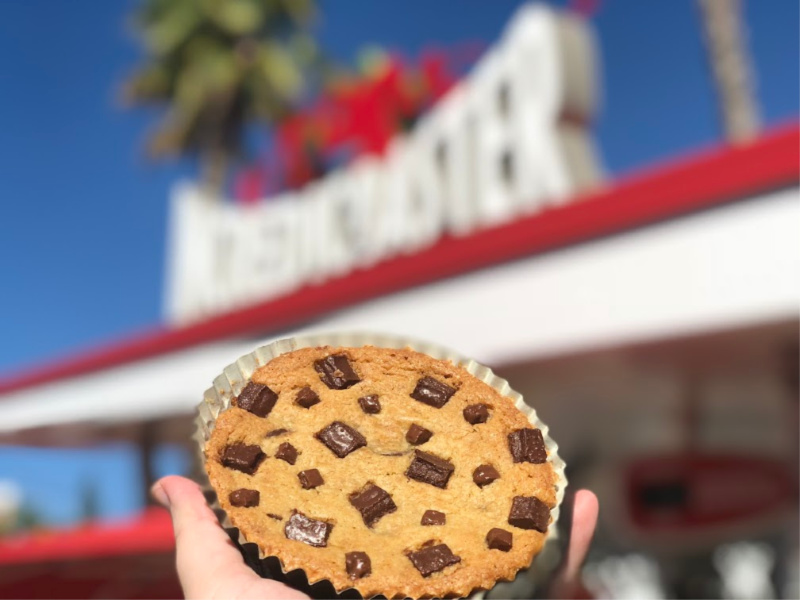 Extension of Pixar Play Parade and Paint the Night

If you visited during Pixar Fest, which started this past April and ended in early September, you may remember the return of two very popular parades. The Pixar Play Parade saw several new floats added and moved over the Disneyland park. And Paint the Night welcomed a new float for the opening of Incredibles 2 and moved over to Disney California Adventure park. 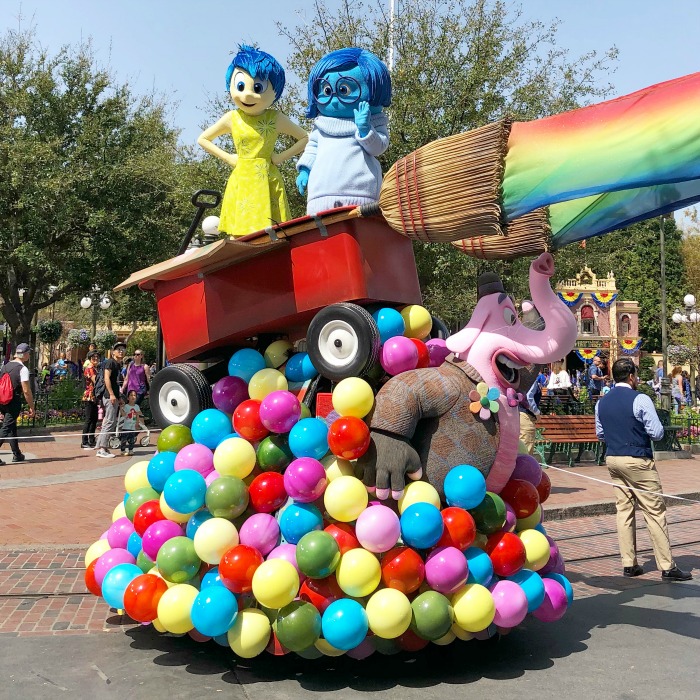 Joy and Sadness joined the Pixar Play Parade earlier in 2018.

While Pixar Fest has now closed for good, both parades were extended and continue to run into the fall. Disneyland just announced that the Pixar Play Parade’s will run through November 4, 2018, and Paint the Night’s last night will be November 7, 2018. I recommend not delaying if either of these are high on your Disneyland bucket list.

Over the summer, Disney Parks launched a brand new app that many guests have still yet to download and discover. The Play Disney Parks app is designed to provide guests with games and entertainment while waiting in attraction lines, making everything more interactive and passing the time more happily. 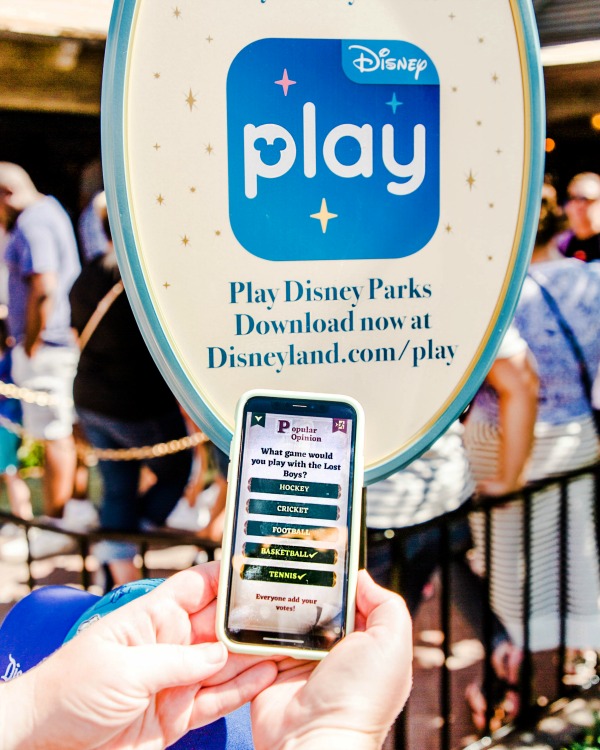 The interactive options are only available for a few select attraction lines at Disneyland so many guests still aren’t aware of what it has to offer. My kids and I finally tried it on our recent Halloween Time visit in the queue for Peter Pan. The verdict? Way more fun than I was expecting! We easily passed our 30 minute wait by searching for hidden icons in the rafters of the queue. The experience culminated with a special effect from a certain favorite pixie as we neared the end of the queue. Definitely give it a test on your next trip. Other guests in the queue were looking over our shoulders and asking how they could get in on the fun when they saw what we were doing. 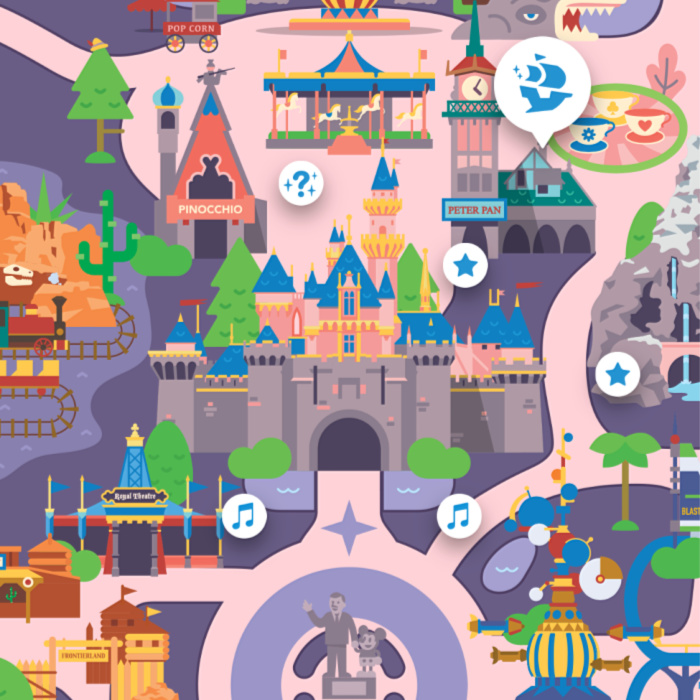 While we are on the topic of Disney technology and apps, it’s also important to mention that mobile ordering came to Disneyland earlier in 2018. Walt Disney World has had this feature in its app for quite a bit longer and it’s a major time saver. It rolled out to even more locations at the end of August, including Tiki Juice Bar. No more need to stand in line for Dole Whips!

But seriously, if you haven’t used it yet, it’s an amazing way to beat the lines. My first experience with it was a late dinner visit to Red Rose Taverne when I needed to grab my son a quick meal before Fantasmic. Lines to order were 5 and 6 families deep at the cash registers. Instead of getting in line, I pulled up the Disneyland app, selected our food, and was served before several of those families even reached the cashier to place their order. (Check out the Happiest Blog on Earth for her guide to the Disneyland app that has detailed mobile ordering instructions for more info.)

Summer also brought a revamp of the Disneyland character meal offerings. With Ariel’s Grotto closed to become the Lamplight Lounge, Disneyland found itself down to just four restaurants offering character dining. So they decided it was time for a bit of a shakeup! 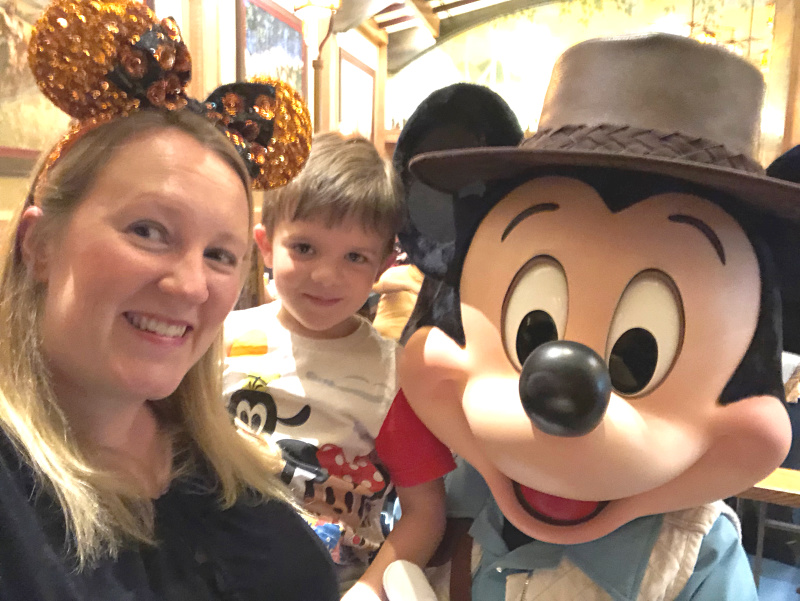 Over at PCH Grill in Disney’s Paradise Pier Hotel, Surf’s Up has been replaced by Donald Duck’s Seaside Breakfast. Other than a change in the headline character to Donald Duck and a few signs, the meal is mostly unchanged. There’s still a beach party theme complete with a dance break with the characters. 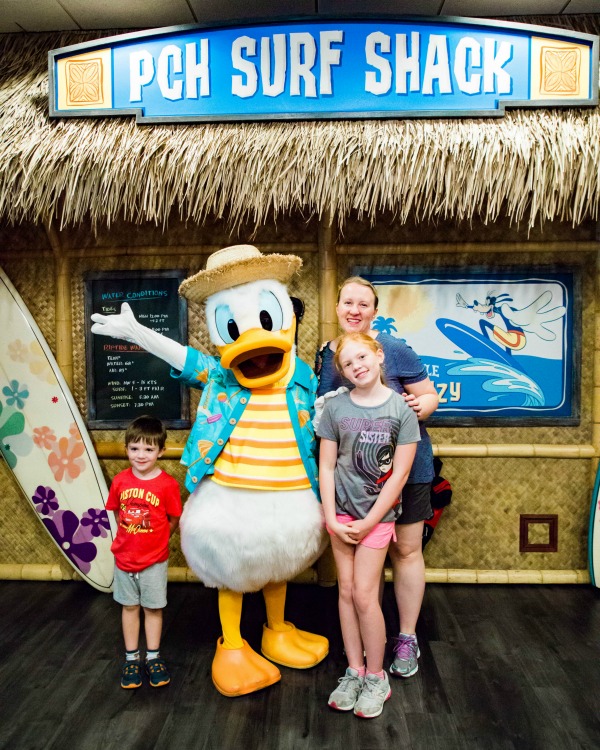 Check out all the character meal options in my complete guide to Disneyland character dining. 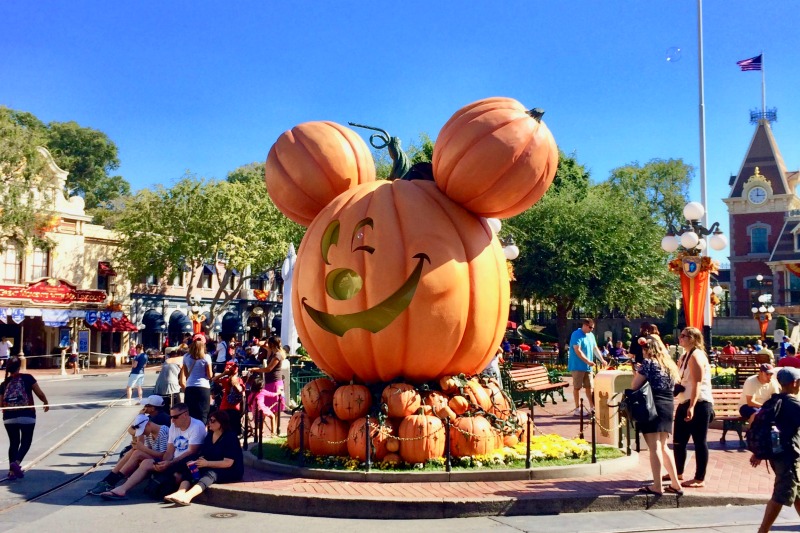 So now that the summer changes are in the hopper, let’s talk fall! Many of the usual Halloween Time celebrations are taking place again this year at Disneyland. Space Mountain Ghost Galaxy and Haunted Mansion Holiday are back, as well as the usual colorful Dia de los Muertos decor in Frontierland.

All the significant Halloween expansions from 2017 to Disney California Adventure are back as well. Those include Haul-O-Ween and special attraction overlays in Cars Land as well as Guardians of the Galaxy – Monsters After Dark (available this year after 5pm). 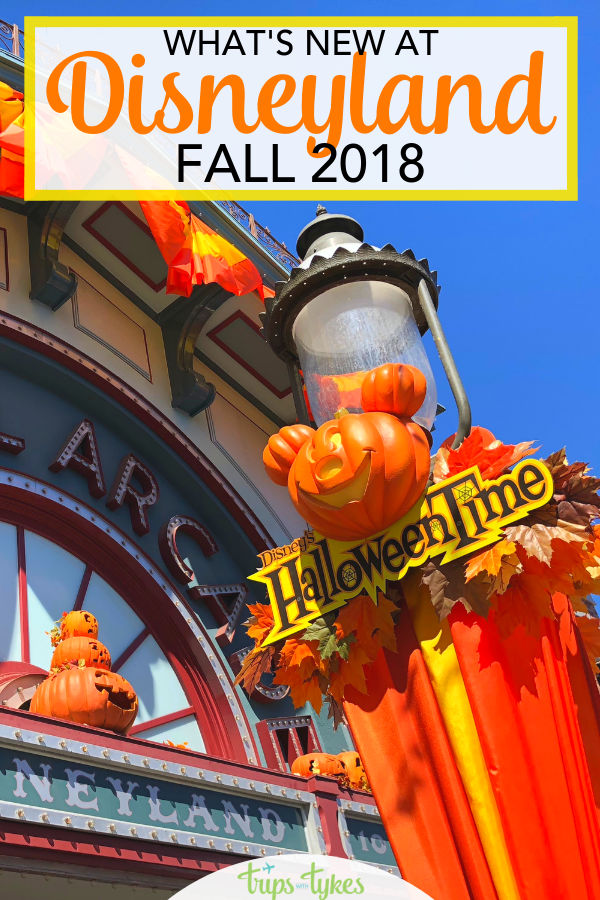 That may seem like plenty (and it is!), but there are still new things in the mix in 2018 as well. Here are all the special new offerings to look out for in September and October during Disneyland’s Halloween Time. 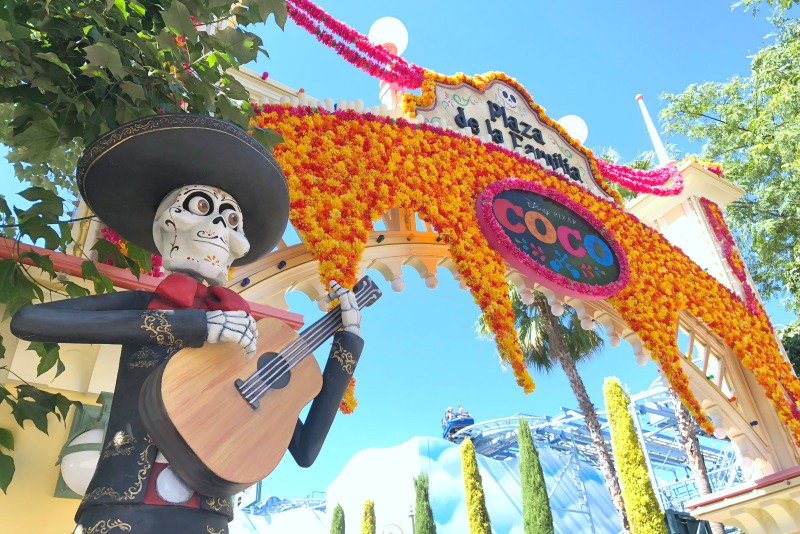 With the release of Pixar’s hit movie Coco in the last year, it’s no surprise that Disneyland has significantly expanded its Coco and Dia de los Muertos celebrations. The Paradise Gardens Park area of Disney California Adventure has been transformed into Plaza de la Familia. These offerings are open through November 2, 2018 (a few days longer than the Halloween Time events).

The craft station was especially a hit with my 4-year-old. There, he was able to decorate his own alebrijes (spirit animal) mask. 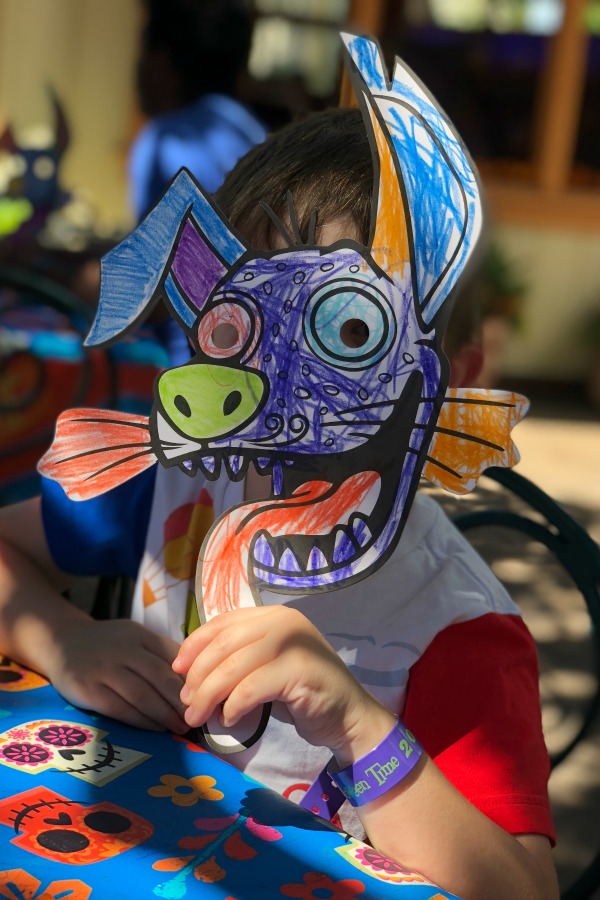 There’s also live mariachi music at the bandstand several times a day. Coco fans are not going to want to miss the runaway hit “A Musical Celebration of Coco.” In this show, Miguel appears in life-size puppet form along with  several figures from the Land of the Dead in a performance filled with music, dancing, and storytelling. If you hope to see this show, I’d recommend arriving and setting up shop right in front of the Plaza de la Familia sign about a half hour in advance. It’s a standing room only show and is highly popular!

If you have a Disney Junior loving toddler or preschooler, chances are good you know who Vampirina is. She’s the star of a new cartoon on the Disney Junior television network. And since she’s a vampire, Vampirina is a pretty natural addition to Halloween Time. 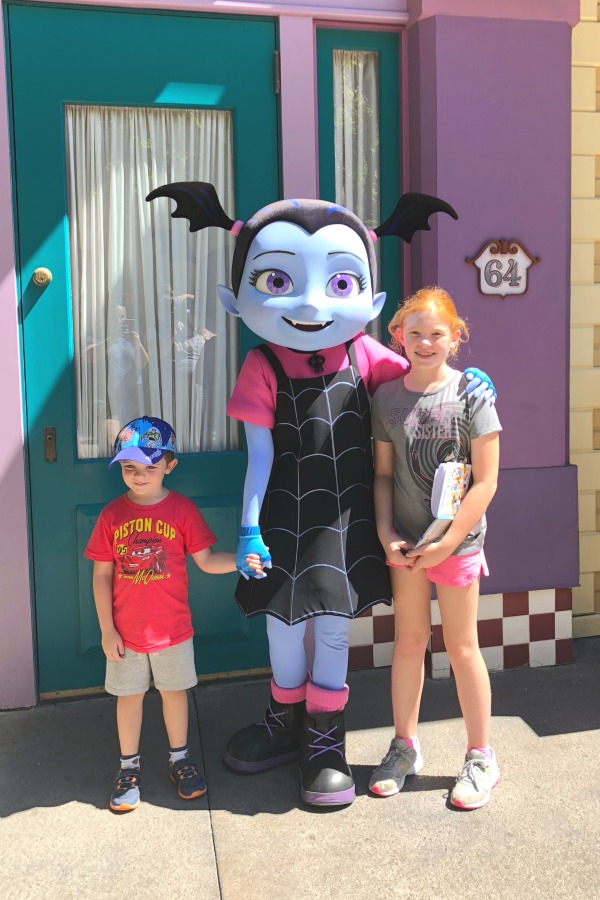 Vampirina meets and greets daily in Hollywood Land in Disney California Adventure (confirm locations and times in the official Disneyland app). When my family and I met her, she did not have a Photopass photographer at her meet and greet location, so be sure to bring your good camera if you need a great shot.

For guests who are attending Mickey’s Halloween Party in 2018 (special ticket required), Vampirina also now makes an appearance in the Frightfully Fun parade during the party. 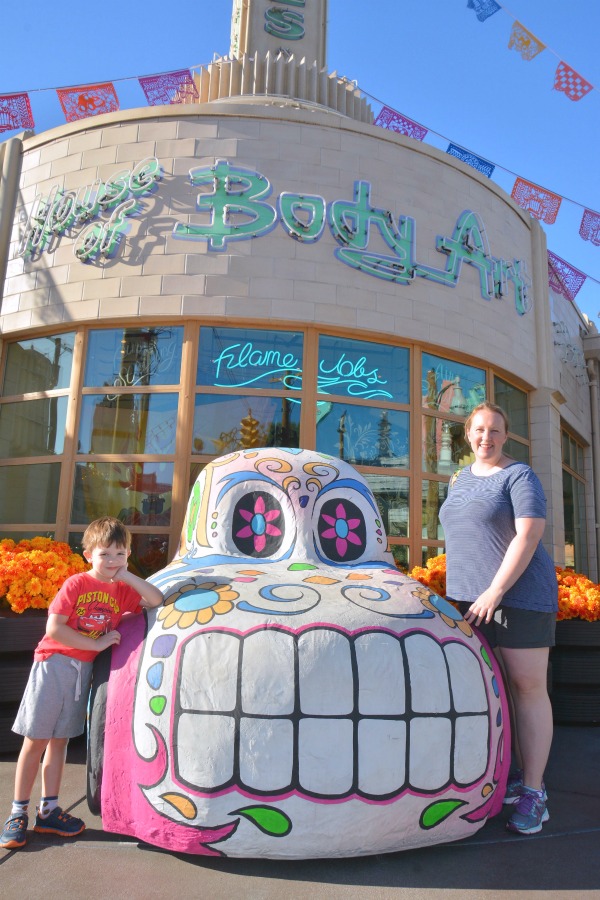 While most of the offerings in Cars Land are the same as 2017, there’s one new addition that make for an excellent photo opp. Right outside of Ramone’s is an ofrenda (alter) for the dearly departed Doc Hudson from the movies. The decor is in keeping with Dia de los Muertos and gives Coco fans one more location to experience the spirit of the movie in the parks.

The Holidays at Disneyland 2018 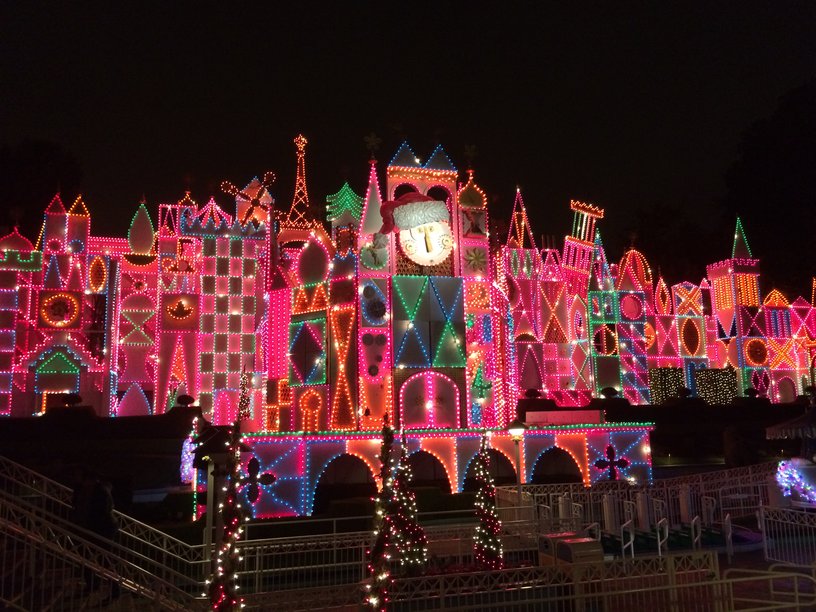 The Christmas season at Disneyland is always magical, and 2018 promises to be no exception. This year, it runs from November 9, 2018 to January 6, 2019. The details come out from Disneyland in drips and drabs during the fall, and I’ll continue to update this post as all the new additions are announced. And I’ll be in the parks November 12-13 for the media event to launch the Holidays so I’ll have even more soon. 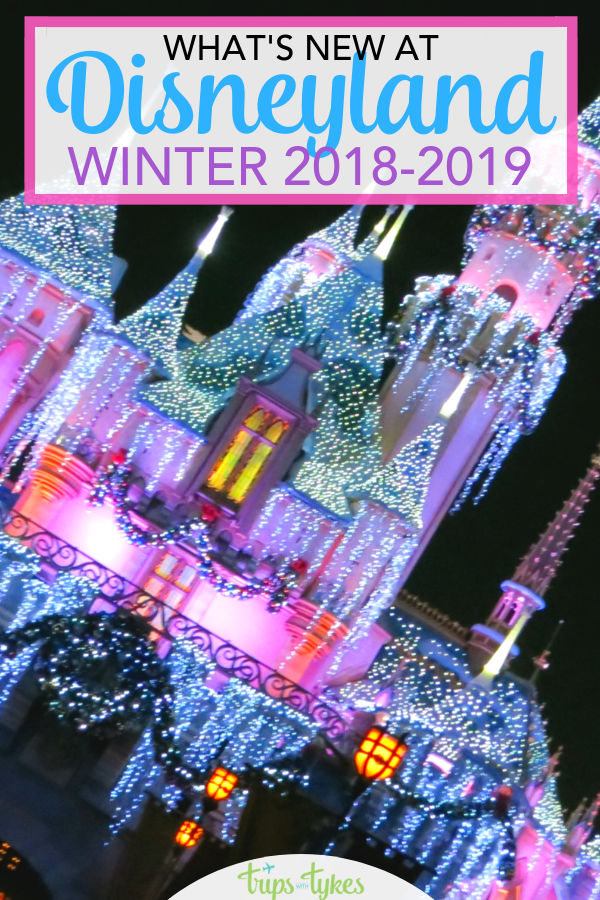 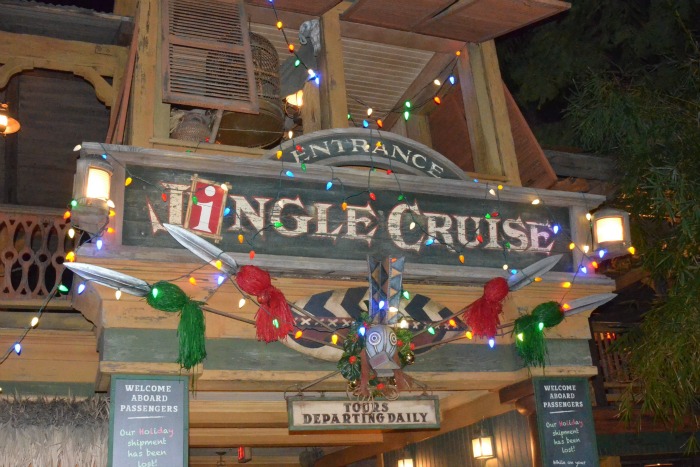 Check out my Complete Guide to the Holidays at Disneyland for more information.

While most of the new offerings in the fall and winter accompany Halloween Time or the winter holiday celebrations, there are a few other changes planned for 2018. These are permanent changes that will be here to stay when they open. And quite a few other things are coming in 2019.

Here is what is already open:

And here’s what Disney has announced so far:

Disneyland bound? Save big by booking your tickets or vacation packages through trusted Trips With Tykes partner, Get Away Today. Use promo code TYKES10 for an extra $10 off all package stays of 2 nights or more. Here are just some of the benefits of booking with Get Away Today: 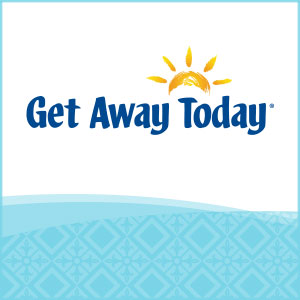 Nice article, I read this and i say you that is awesome.

Thank you for sharing this informative guide, it has really helped me to prepare my itinerary for my upcoming trip to disney with my kids.