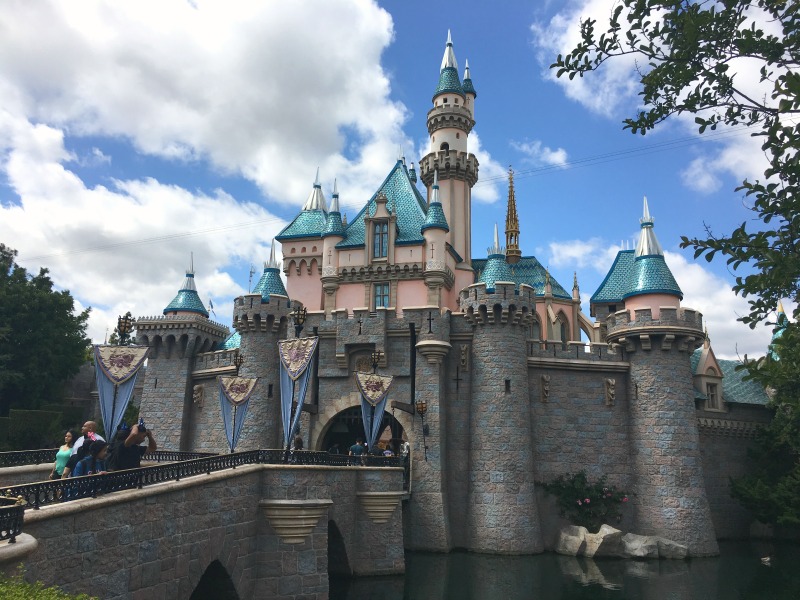 I love Disneyland, but I hate standing in line for attractions. I’ve made it my mission over the past decade to find all sorts of secret methods and tricks to avoid the Disneyland crowds. On a standard Disneyland day, my family easily fits in 20-30 rides and still has time to get the kids an afternoon nap back at the hotel.

There are times, however, when all the best Disneyland line avoidance methods simply are not enough. Disneyland has had a well-publicized crowd problem during certain times of year (in fact, Disney suspended selling some of its local annual passes a few years ago, in part, to deal with the overcrowding). If your trip happens to fall over one of these busy periods, it can be frustrating to battle crowds and stand in line all day.

My family recently visited Disneyland during the busy Veteran’s Day holiday weekend. While we didn’t think it would be exceptionally crowded, many California schools scheduled holidays for both Monday and Tuesday this year. This gave many families in the area a four day holiday weekend to hit Disneyland. While we did our best to avoid the crowds, even some of our tried and true methods were insufficient to avoid them all. 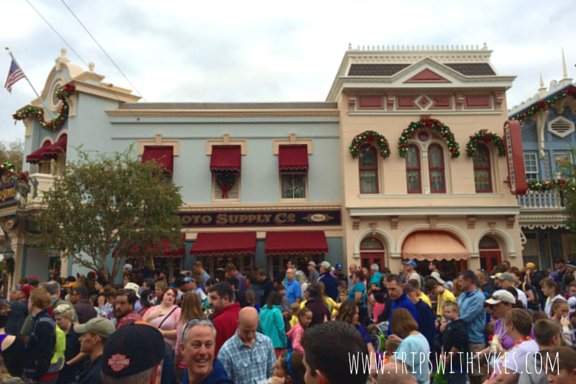 My advice? If you happen to visit during a crowded time, don’t resign yourself to waiting in long attraction lines with your kids all day. Disneyland has so much to offer besides the rides. On busy days, take the chance to explore all these other offerings.

Here are 10 of my favorite things to do in Disneyland on crowded days.

If you have younger kids, Mickey’s Toontown is a great place to spend some time on crowded days. Many of the attractions are simply cartoon-inspired play structures for kids to explore. Let your kids roam, climb, and burn off some of that churro and Dole Whip fueled energy.

When the park is crowded, many of the lines to meet Disney characters can be long too. The good news is that on busy days, there are more characters about to meet and greet, so the lines often aren’t that bad. The characters also take frequent breaks, so the lines to meet them form anew when a character comes back from a break. This gives watchful Disney visitors opportunities to find lines that aren’t very long. Keep your eyes peeled and when you pass a character meet and greet location without much of a line, seize the opportunity. And don’t forget to use the official Disneyland app to find all the meet and greet offerings. 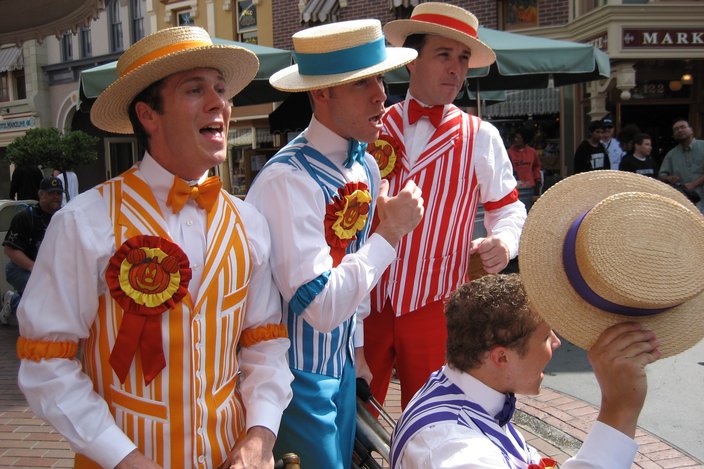 Disney hires excellent musicians and performers who play in both Disneyland and California Adventure parks. Check the daily schedule guide available at park entrances for show times. My family’s favorite is the Dapper Dans, an a cappella quartet that performs on Main Street Fridays, Saturdays, and Sundays.

4) Take in Some History With Honest Abe

One of Walt’s classic attractions is Great Moments with Mr. Lincoln, an audio-animatronic show featuring Abraham Lincoln himself. The show is located in a theater on Main Street near the park entrance and rarely fills to capacity. It has the added benefit of being both educational and a great opportunity for everyone in the family to get off their feet and rest for awhile.

My family always orders Disneyland’s Photopass on every trip (what is Photopass, you ask? Check out DLR Prep School’s excellent guide to the current system at Disneyland – Photopass+). In Disneyland, Photopass costs a mere $69 for unlimited photos of an entire weeklong trip or just $39 a day.

On crowded days, there are Photopass photographers everywhere waiting to take your family photos. When the ride lines are too long, get as many photos as you can throughout the parks instead. You never know when you will capture that perfect group shot that becomes the family’s holiday card photo later in the year. 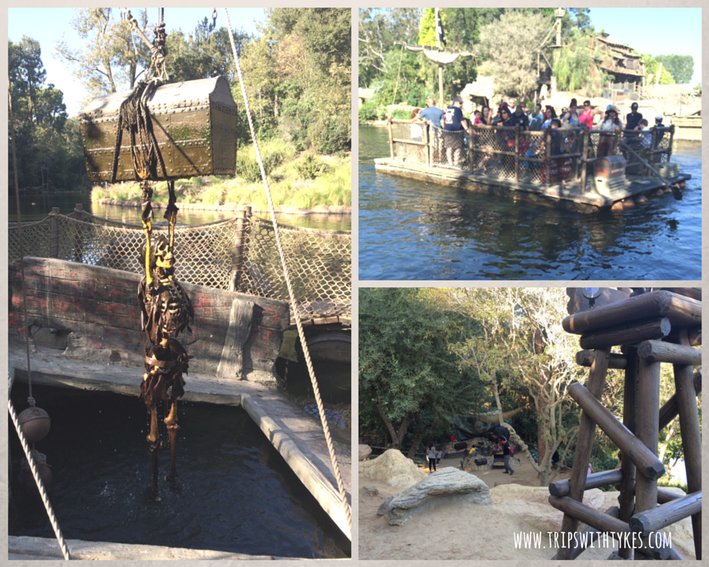 Another classic Disney attraction that isn’t often crowded is Tom Sawyer Island – updated several years ago with a pirate flair. Young kids will really enjoy the chance to explore and run around. The caves were a big hit with our 5 year old daughter. Just be careful not to lose your toddlers and younger kids in there! [Note: Tom Sawyer Island is currently closed due to Star Wars Land construction and slated to reopen summer 2017]

Hidden Mickeys are the creation of Disney Imagineers who have woven Mickey’s iconic image into park decor in many subtle ways. HiddenMickeyGuy.com has an impressively comprehensive list, so go search for more on your next visit.

It took me nearly a decade of visiting Disneyland before I realized that you can go into Sleeping Beauty’s castle! After passing through the entrance and into Fantasyland, there is a small door to your left that takes you into the castle itself. Inside, you can see the classic tale of Sleeping Beauty told through visual displays. Even on a very crowded afternoon, we only waited a minute or two to walk through the attraction.

The theater on Main Street shows some of Walt’s earliest cartoon classics, including Steamboat Willie. The theater can be a great spot to cool off and take a break from the crowds on busy days. 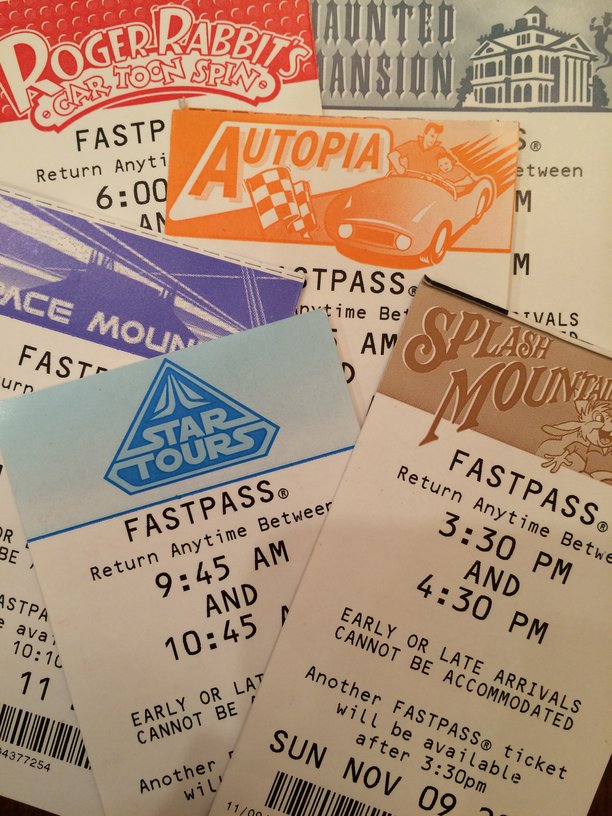 Disneyland’s Fastpasses are the best way consistently to avoid lines on busy days.

Even though there are many non-rides to keep you busy on a crowded day, I wouldn’t recommend missing the rides completely! Your best bet for riding popular attractions on a crowded day is to use Fastpass to cut the lines on some of the busier attractions. You can get a new Fastpass as soon as the time reservation window for your current one starts (or after two hours, if your Fastpass return time is longer than two hours later). Get as many as you can and use them within the time windows allotted. And if you are visiting Disneyland with a baby or child too small for some of the height restrictions, don’t miss my guide to maximizing Rider Switch with Fastpass – you may be able to ride even more that way!

Have you been to Disneyland on a crowded day?  What are your tips for avoiding long lines?

We are going to Disneyland at the end of April with our almost 2 year old son. Since he is little and we are only going to do small kids rides, do you think I need a FastPass???

You should absolutely take advantage of Fastpass for every ride it is offered on that your son might want to ride - it's free! Although Fastpasses are mostly available for thrill rides, you can get them for rides that might be appropriate for 2 year olds like Roger Rabbit's Car Toon Spin, Autopia, or Buzz Lightyear. Fastpasses are also available for some entertainment/shows like World of Color. Plus, if you are going with another adult and can take advantage of "Rider Switch," Fastpass is great for mom/dad/adults to get to ride a few thrill rides while trading off caring for the toddler! See my guide to Fastpass and Rider Switch here: https://tripswithtykes.com/2015/01/30/maximizing-rider-switch-and-fastpass-at-disneyland/

Complete Guide to Holidays at Disneyland 2015 - Trips With Tykes

[…] 1. Prepare for crowds: The Holiday season at Disneyland is always popular, but with the (very popular) 60th Diamond Celebration going on at the moment too, crowds are likely to set some new records.  If you are expecting to go on a crowded day, read up on my best line Disneyland avoidance tips and on things to do on a crowded Disneyland day. […]

Been going since I was a kid and I am a grandmother now and when I ask people they still don't know about Tom Sawyer island or even what I am talking about, yay!

[…] recently visited both Disneyland and Disney World, I made sure to make special note of all the differences I could spot on these […]

Last August I went to Disneyland with my husband, 9 year old daughter and 3 year old son. Even though it was summer we never waited more than 15 to 20 minutes, even for the popular attractions, thanks to fast pass and rider switch. Also my husband just happened to be waiting in line at City Hall to replace his park ticket when a man was throwing a fit for some reason. Because this man sized toddler was taking forever with his complaint they gave my husband 3 fast passes good for up to 3 or 4 riders I believe, for any attraction we could use at any time. Pretty cool! Hoping to go back this August. I like to think we've mastered the fast pass system! :-)