I’ve shared often why my husband and I have made Southwest Airlines’s our family’s airline of choice the past several years. Kind and funny employees, a growing route map, and policies that work especially well for family travelers have helped earn our loyalty. What I also love is that the airline doesn’t nickel and dime me for the amenities I like and need when I fly. I’ll take free, please. 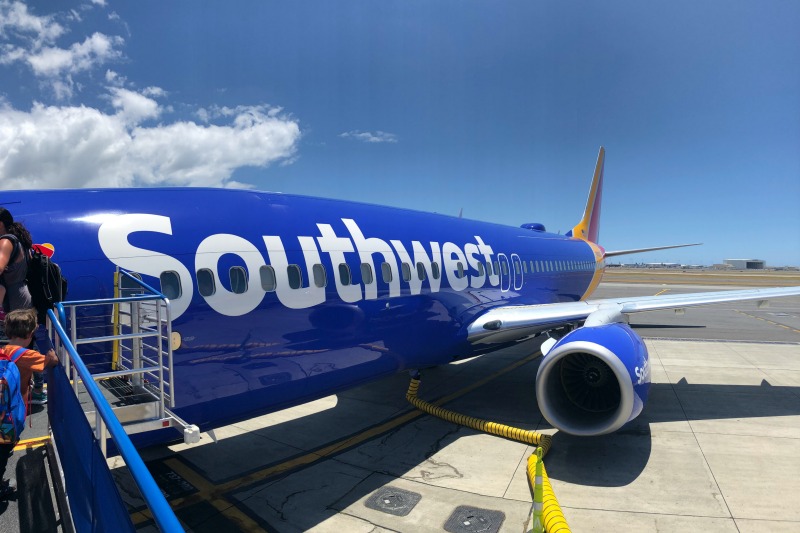 If you’ve seen the ads, you might already know “bags fly free” on Southwest. But the reality is that the airline offers a lot of other free amenities and perks that will cost you on many other airlines. For families buying three, four, and more tickets, getting all those little extras for free can really add up to some major savings. A few of these Southwest freebies aren’t necessarily well-known, so I thought I’d use this as a chance to educate other travelers about them. I want you to be able to take full advantage to save more money in your family’s travels!

If you aren’t familiar with flying aboard Southwest Airlines, be sure to check out my other top Southwest articles to get acquainted with the airline:

Now on with the Southwest freebies! 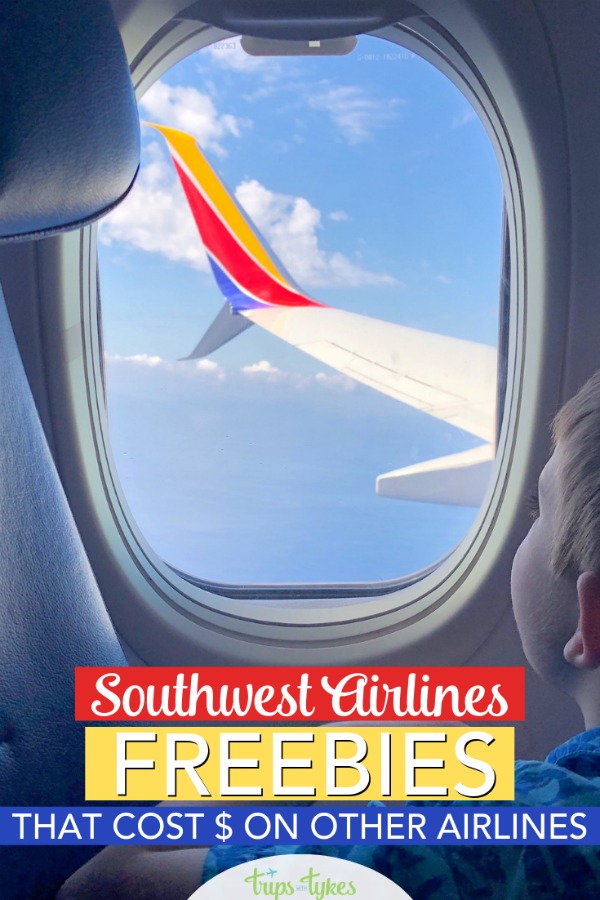 7 Things that are Totally Free on Southwest Airlines

The Southwest mantra is simple — “Bags Fly Free!” Southwest is now the only U.S. airline that does not charge for checked bags. In the second half of 2018, nearly all the major U.S. airlines actually increased their bag fees from $25 to $30 for the first bag, so the Southwest savings have gotten even bigger. 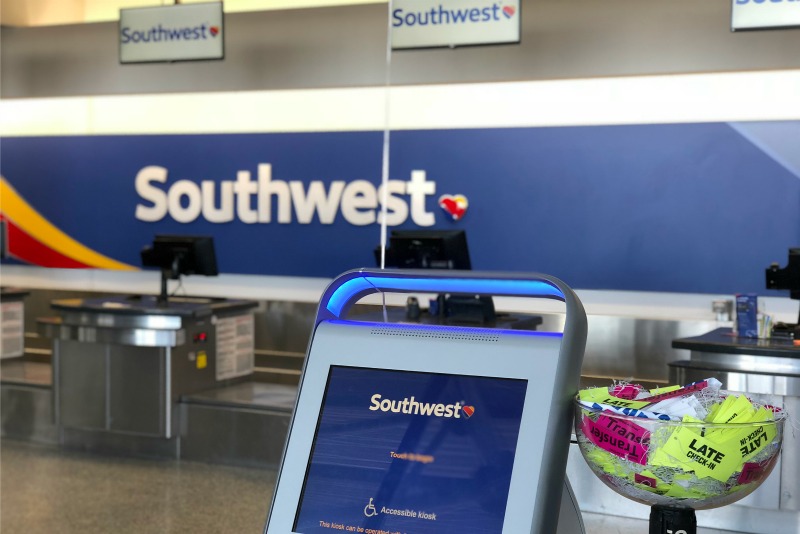 As much as I try to carry on whenever I can, it’s impossible to do all of the time. I often need to check a bag on longer trips or trips to cold destinations (anyone who can pack for a ski trip in carry on bag is officially a superstar). When my kids were babies and toddlers, checking a bag or two was simply a necessity. I didn’t have the hands free to carry on with strollers and car seats and the kids themselves. I appreciate that I never have to stress with Southwest to check bags when I need to. 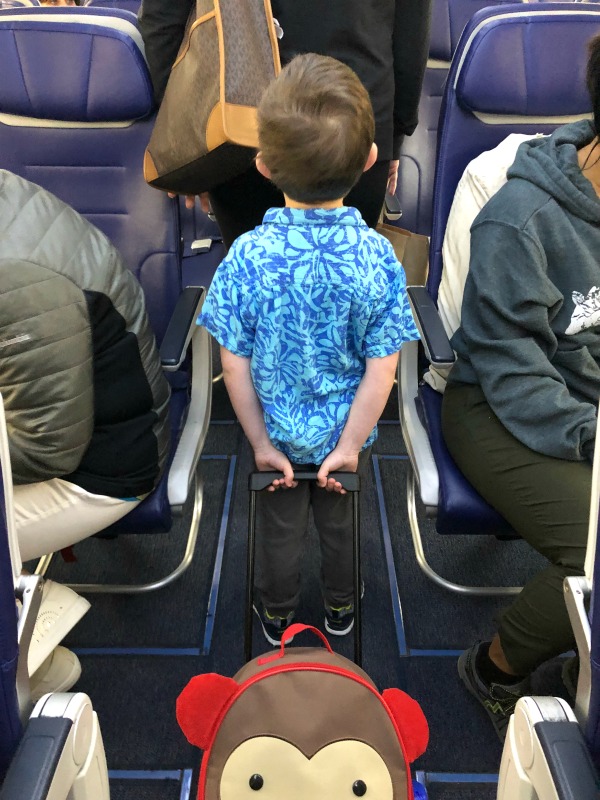 Boarding a Southwest flight with a free carry on bag.

With the growth of low cost carriers both in the US and abroad, many more airlines are now charging for carry on bags as well. In the US, ultra-low cost airlines like Spirit, Allegiant, and Frontier charge a fee that is often larger than their checked bag fee. This is all for the privilege of bringing anything larger than a purse or backpack aboard. Legacy airlines like United are jumping on this bandwagon, offering “basic economy” tickets that don’t permit large carry ons.

There are no carry on bag fee fears with Southwest. All passengers can bring up to a full size roller bag on board as well as a personal item. Parents with lap children even get an extra diaper bag allowance. And because Southwest doesn’t charge for checked bags, the overhead bins on Southwest rarely fill like they do on other airlines. You can actually find a place to stow your carry ons aboard Southwest.

3. Changing or Cancelling Your Flight Reservation

Unless you have airline elite status, all other US airlines charge a hefty fee for changing flight reservations more than 24 hours after you’ve booked a flight. This flight change fee is usually $200 on most major U.S. airlines like Delta, United, or American.

Southwest does not have a change fee at all if you need to switch to a different flight. Even if you’ve booked Southwest’s discounted “Wanna Get Away” fares, you can cancel or change and use the travel funds towards a future flight reservation (for up to a year from the date you first booked the flight). If you booked your flight with Rapid Rewards points, your points and the taxes are simply refunded if you cancel.

Of course, if the fare for the other flight is more expensive, you’ll need to pay the difference in fares. But there isn’t an extra “change fee” on top of this fare difference with Southwest like every other airline will charge. Better yet, if the fare you booked has dropped, Southwest will actually give you a credit back for a future flight. Seriously! So watch for those Southwest flight sales and see if your already-booked trips have dropped in price for a chance to save. 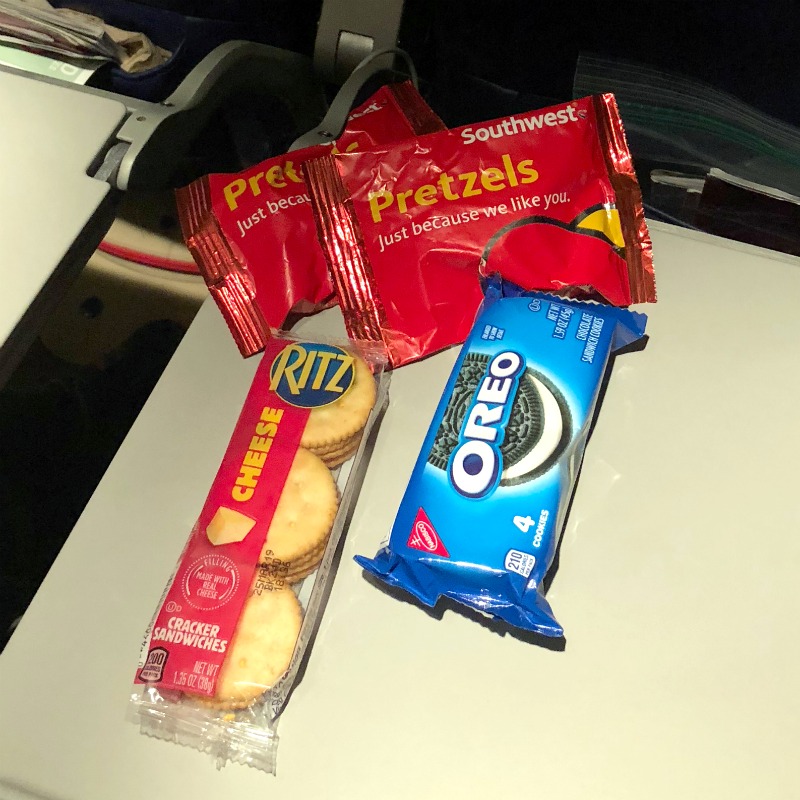 Airlines have been radically downsizing the food options the last few years. Most U.S. carriers now offer very little food in economy class on any of their flights for free. You might get a tiny bag of snack mix on United or the like. But if you want anything more substantial, however, you’ll need to fork over some big bucks.

Southwest is a no frills airline so there are no $27 croissant breakfast sandwiches for purchase on their flights. But you get much more for free. Southwest flight attendants are always super-generous with the airline’s free snack offerings. On shorter flights, pretzels or plane cookies (similar to animal crackers) are usually served. On longer routes, flight attendants usually offer both pretzels and an assortment several of Ritz/Nabisco snacks. You really can take as many as you want. And on Southwest’s new Hawaii flights, there’s a more extensive snack box that is equivalent to what many airlines would charge $7-8 for! 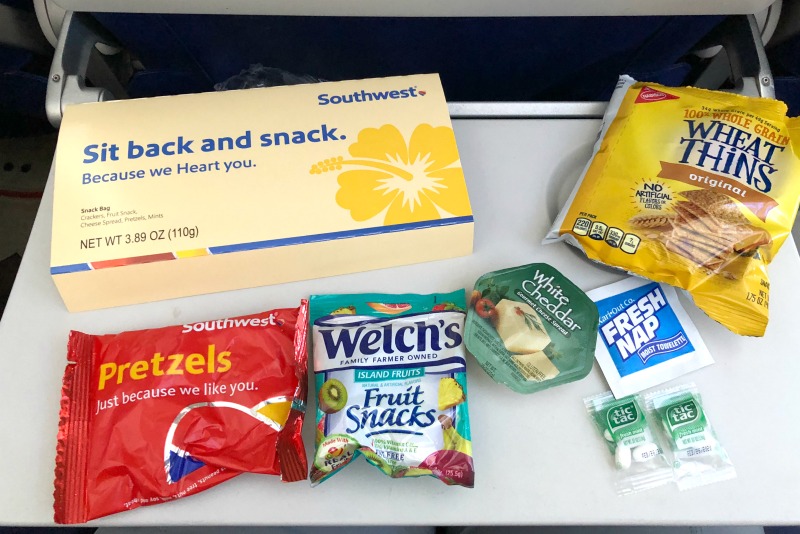 In-flight entertainment has been changing rapidly the last few years and for the better. But Southwest still offers much more of theirs free than is available on many other domestic airlines

Southwest’s current system requires your own device (smartphone, tablet, laptop), but almost all of the entertainment content is entirely free. There are usually about two dozen recently-released movie choices as well about a dozen live streaming TV channels.  Southwest also recently added free iMessage and WhatsApp access so you can stay in touch even if you don’t purchase WiFi. 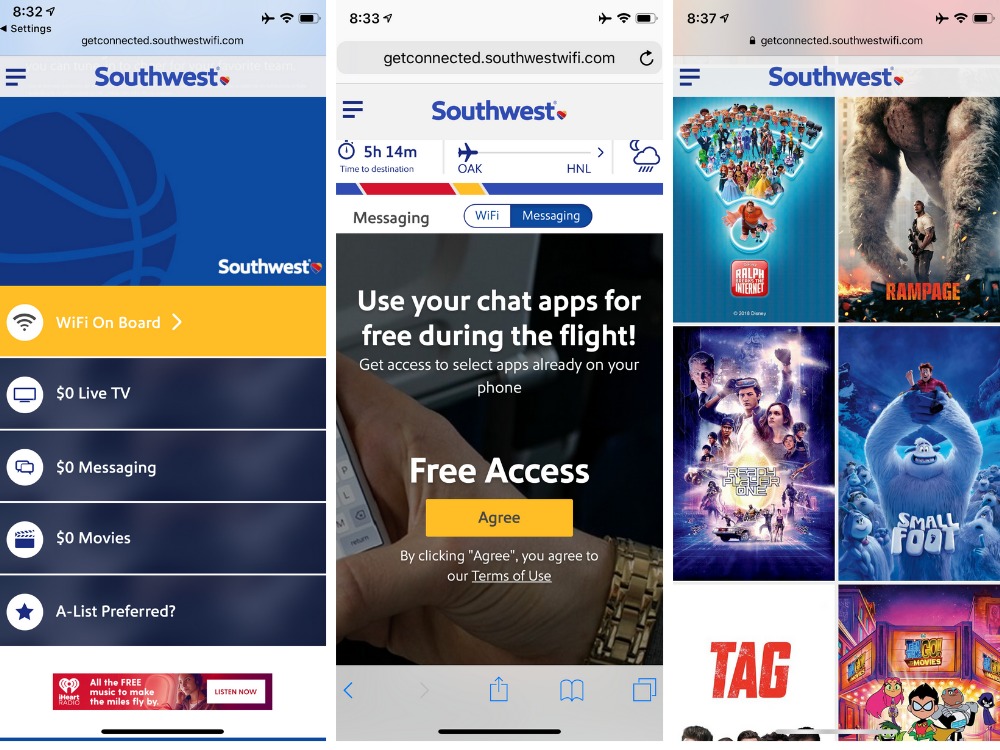 Free entertainment options on your own devices.

You’ve worked hard for your miles, racking up many hours on planes and spending a lot on credit cards to earn them. So why do so many airlines want to charge you for the privilege of using them? Believe it or not, many airlines do just that. Some airlines do it by charging hefty fuel surcharges on award tickets that can be hundreds of dollars. Others do it by charging fees like close-in award ticketing fees if you want to book a mileage ticket less than 21 days in advance.

There are simply no hidden or tricky fees when redeeming your Rapid Rewards points on Southwest, even if you redeem them for same day travel. The only extra cost you’ll pay for an award ticket is mandated government fees. For US travel, this is $5.60 each way. 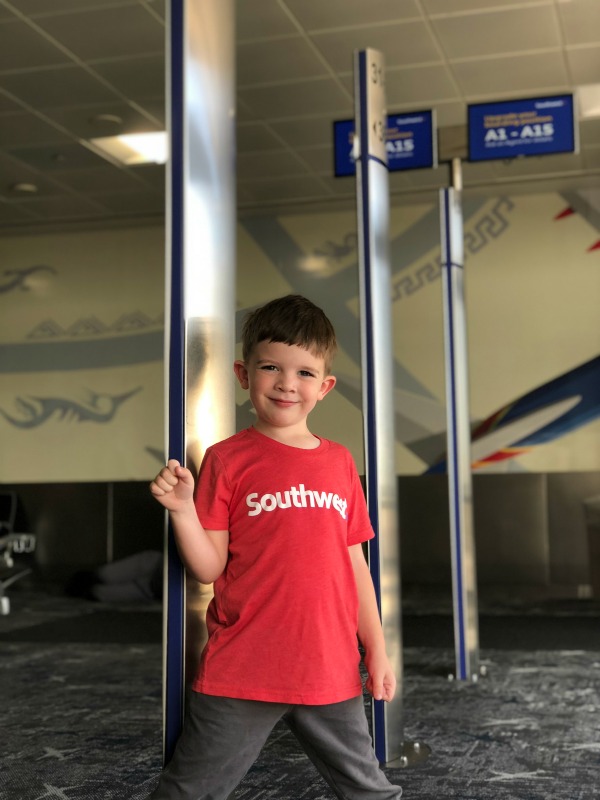 My 5 year old at the queuing poles for Southwest’s unique boarding process.

Seat assignments have become an increasingly contentious commodity on most US airlines. Many airlines, especially low cost carriers, charge for the privilege of having any assigned seat. Many others simply make nearly everything but middle seats “preferred” seats that travelers have to pay to book. For parents, it’s a complex game of chicken just trying to find seats together with their kids anywhere on the plane without paying mightily for the privilege.

Southwest solves the problem by simply not having assigned seats. Parents with young kids can almost always be assured of seats together because of the airline’s policy of allowing families with kids 6 and under to board between boarding groups A & B. Other travelers can get the seats of their choice by checking in for their flights right at 24 hours in advance and getting an early boarding number.

Southwest offers Early Bird Check-in ($15-25 each way) that you can pay for if you want to be first on the plane when you can access the best seat options. But it truly is optional. It’s entirely possibly to fly the airline regularly, never purchase Early Bird, and still get great seats — as I happen to do!

Although WiFi isn’t free on Southwest, I thought it deserved a mention. Why? It’s cheap on Southwest compared to the competition. Only JetBlue does better (JetBlue is the only US airline to offer free WiFi to its passengers).

Southwest is certainly next best, charging $8 for a full day of WiFi service, no matter how many flights you are on in a single day. Every other U.S. airline charges a hefty fee for their WiFi service — as much as $25 a day or more if you wait to buy on board your flight. Even the discounted pre-purchased passes are much more expensive.

One other bonus you shouldn’t forget? If you have the Southwest Priority Credit Card from Chase and use that card to purchase WiFi, you get a 20% discount. (Learn about this card and the differences in the three Southwest credit card offerings).

Many airlines can nickel and dime with you lots of extras that cost more. My family has chosen to fly Southwest because the money we save with the airline’s free offerings really adds up, even when tickets aren’t necessarily the cheapest up front. Always, always do the overall math before you book with any airline! 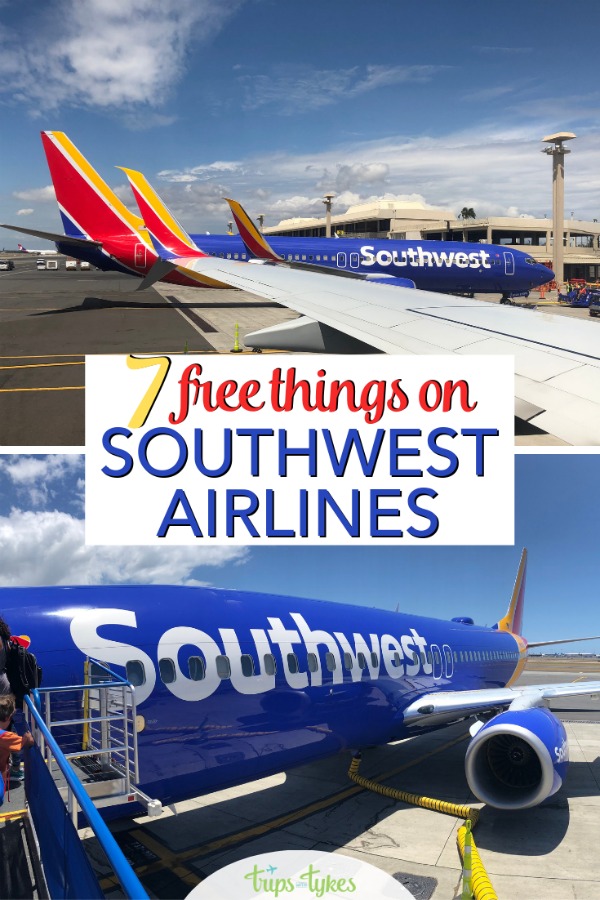 Disclosure: I’m a paid ambassador for Southwest Airlines in 2019. All opinions are my own.

My wife and I always travel SW. WE have a SW credit card that accumulates points and we can use and travel free. So I would get the Chase SW credit card its very beneficial if you fly a lot. Before Covid we flew twice a year, but now we are back to schedule. Love the easy experience of Flying SW.

Am I allowed to take a whole apple pie on a flight to Orlando in a carry on bag, or should it be put into a checked bag.. it’s for Mother’s Day! Thank you! Peggy

Its very helpful tips Thanks so much for great arictal!