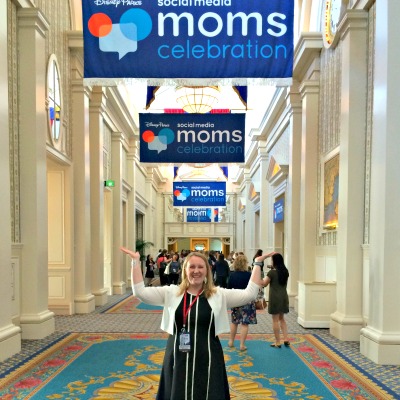 I attended the 2015 Disney Social Media Moms Celebration a little over a week ago in Walt Disney World.  For those of you who aren’t bloggers, #DisneySMMC is part blogging conference and part Disney vacation, with some serious pixie dust thrown into the mix.  I was very honored to be included in the talented and diverse mix of mom (and a few dad) bloggers as a first time attendee.  Of course, given the Disney geek that I proudly am, I was also thrilled to have the chance to take another trip to Walt Disney World.

The conference itself was inspiring, educational, and just plain fun.  I took away a lot about Disney and a lot about blogging and even a little about parenting and life.  So, I thought it would be useful (even for my non-blogging audience) to share my top 7 takeaways from Disney Social Media Moms. 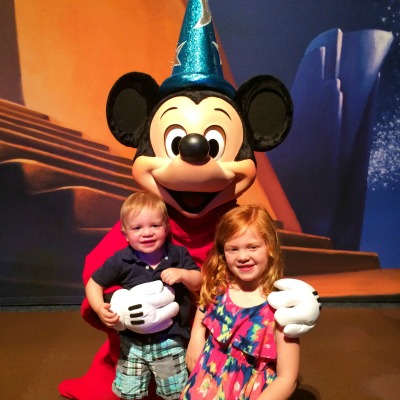 These definitely aren’t exclusively for bloggers.  They are for anyone who is considering a Disney vacation in need of some tips and guidance, anyone who is a parent, and anyone who lives and functions in the digital age where social media is a part of your daily life.  If you are just curious about the conference and some of the sneak peeks we got behind the Disney scenes, there is plenty of that too.

Without further ado, my top 7 takeaway from 2015 Disney Social Media Moms are: 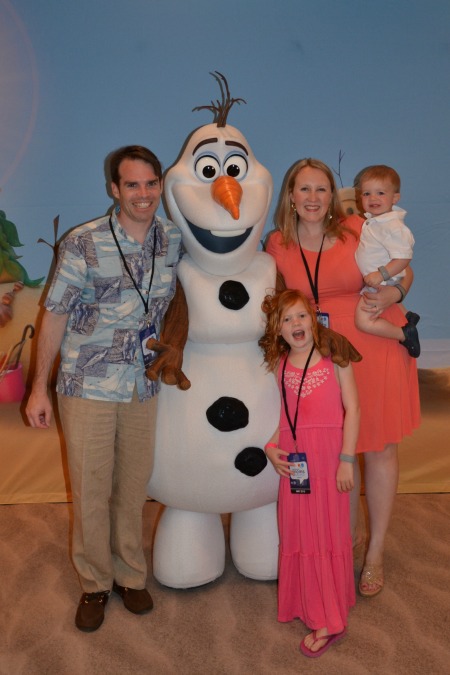 Meeting Olaf was a conference highlight for my 19 month old! While he does not yet say “mama,” he has no trouble with “Olaf.”

I’ve written before about the sheer size of Walt Disney World in comparison to Disneyland, so you probably aren’t surprised by this claim. What amazed me, however, is just how much of Walt Disney World was left unexplored after three days. Even a week wouldn’t have been enough.

That’s not to say that if you can only take a three day Disney vacation, not to do it. Simply be realistic in what you can accomplish. I’ve made my peace with the fact that I couldn’t make time for Animal Kingdom and never even set foot in Tomorrowland this trip. It just means I need to plan another trip!

2. Disney knows how to throw a party. 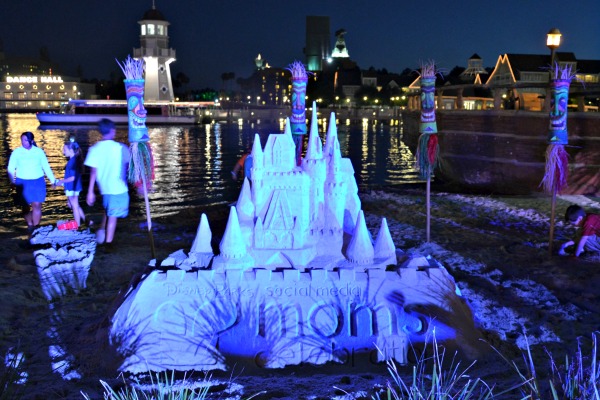 This sand sculpture wowed all of us at Mickey’s Beach Bash at the Yacht Club on Friday night.

As attendees, we certainly had more than our fair share of Disney magic at the evening family events organized for us.  But this takeaway isn’t meant to brag.  It actually taught me something as a Disney fan.

It showed me that when Disney has something to celebrate, it is worth being there to witness the special occasion.  I know those of you who aren’t bloggers won’t ever attend this particular event, but Disney fans should make time to attend special events at Disney more generally.  There are plenty of opportunities: other conferences and conventions, a Disney Parks Blog meetup, Annual Passholder events, or holiday celebrations.  Seeing the Disney magic elevated to the next level has made me want to attend more special events at Disney (Disneyland 60 or D23 anyone?), whether related to a blogging conference or not. 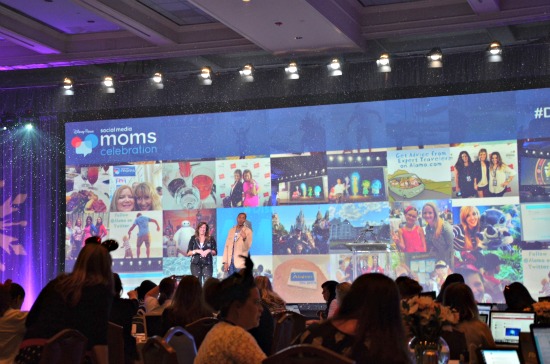 Our DisneySMMC hosts at the blogging conference portion of the weekend.

Everyone attending this conference was a social media powerhouse in her own right.  There were so many heavy hitters in attendance that we even trended on Twitter!  Social media is the way bloggers build their brands and how many make a living at this unconventional profession.  It’s an amazing tool but one that can be wielded in dangerous ways too.  One of our speakers (Donald Driver of NFL fame) told a poignant personal story of how social media could be used to hurt and how he hoped to turn it to be a force for good.  As a parent of a child who will be entering the world of social media in a few years, it was an important parenting lesson and a reminder for me to model good behavior online as well as off.

4. Pixar’s Inside Out is going to be a big hit. 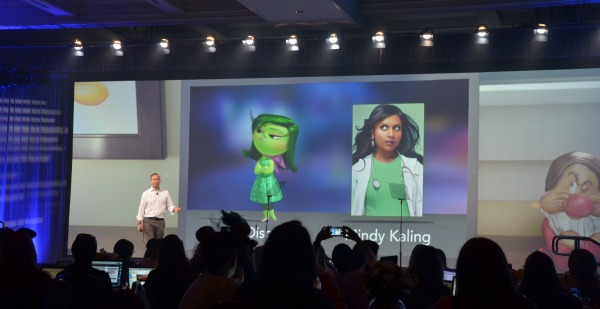 Jonas Rivera from Pixar speaking about the upcoming release Inside Out.

One of the events of the weekend was a screening of (most of) the upcoming Disney Pixar movie, Inside Out.  The movie is about the voices in a little girl’s head and how each individual emotion affects and controls her behavior.  With a star-studded comedic cast, the movie had everyone rolling in the aisles at many moments.

Why I think it will be a hit, however, is for a deeper reason.  It gives parents and kids a platform upon which to discuss their feelings in an age-appropriate way through its personification of emotions like fear, anger, and joy.  My daughter and I have already referred to scenes from the movie several times to work through moments of frustration or anger.  You don’t have to trust me on this assessment; my mother (who is a psychologist) raved about the movie’s potential for opening up dialogue between parents and kids.

So, let’s leave it at this: Inside Out is immensely entertaining with significant helpful practical implications for those of us who are parents!  I call that a win-win.

5. The Pixar short “Lava” playing with Inside Out may be an even bigger hit.

As with most Pixar movies, Inside Out will be preceded by a new animated short movie called Lava.  No spoilers here, but let’s just say that there were very few dry eyes in the house when we screened it.  I never thought I’d be tearing up about an animated singing volcano, but if anyone can pull that feat off, it is Disney and Pixar.  The theme song is one of those songs you can’t get out of your head for weeks but you really don’t mind because it is so beautiful.

For the sake of full disclosure, a friend of mine was the producer of Lava, but that definitely didn’t color my opinion of it.  So many of the #DisneySMMC attendees have been raving about Lava since we saw it that I know I’m not alone on this one!

6. Magic Bands kind of rock. (And this is coming from a major skeptic.) 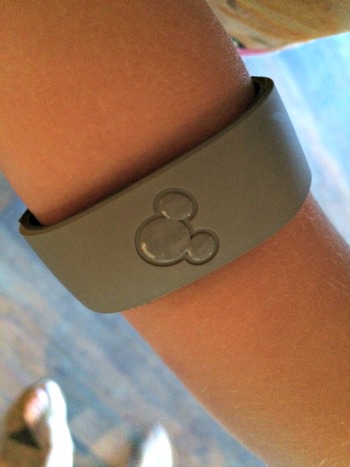 My daughter’s Magic Band held her ticket and room key and she could even leave it on at the pool.

Serious Disney fans have bemoaned the introduction of Disney’s MyMagic+ system with Magic Band technology because of the resulting changes to the Fastpass system.  If you were a major Disney geek (guilty), then you likely knew how to maximize the old Fastpass system and ride many, many more rides than others as a result.  The new system is more equitable, limiting all guests to 3 advanced booked attraction Fastpasses.  That means the new system is less “hackable” for the Disney diehards.

That said, every other advantage that comes with MyMagic+ due to the Magic Bands pretty much makes up for it all.  Magic Bands serve as your Disney hotel room key, your charge card (if you choose to activate that feature), and your Photopass card. Not having to fumble with multiple cards or risk locking yourself out of your room is a major convenience, especially when traveling with young kids.  Magic Bands made our vacation so much more logistically seamless that I almost don’t miss the extra Fastpasses I used to get.

One caveat: speaking from experience, 19 month olds are trickier than you might think and are definitely able to pull off their own Magic Bands and lose them when you aren’t looking.  Luckily they are easy to replace! 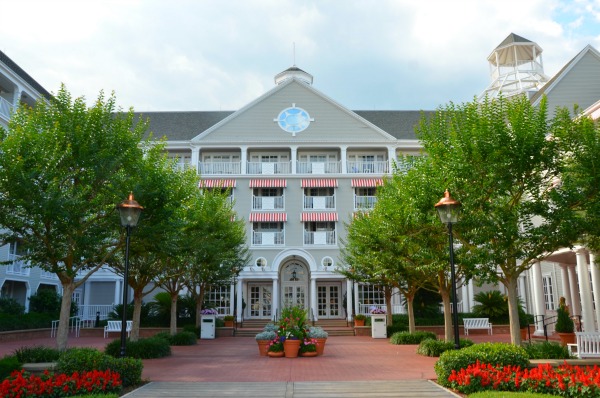 Disney’s deluxe hotels are not for those on a tight budget, but many families choose and plan to splurge on their Disney vacation.  If your family budget allows for a stay in a deluxe resort, Disney’s Yacht Club and Beach Club next door (where conference attendees stayed) are truly amazing choices.

My family adores the Polynesian so I thought nothing could even come close to comparing.  I was wrong.  The two major highlights for our family were 1) the awesome pool, Stormalong Bay and 2) being within walking distance to Epcot.  The hotel also had a cozier vibe than some of the larger resorts.  I hate to admit it, but the Polynesian has a serious competitor when my family is planning our next trip. 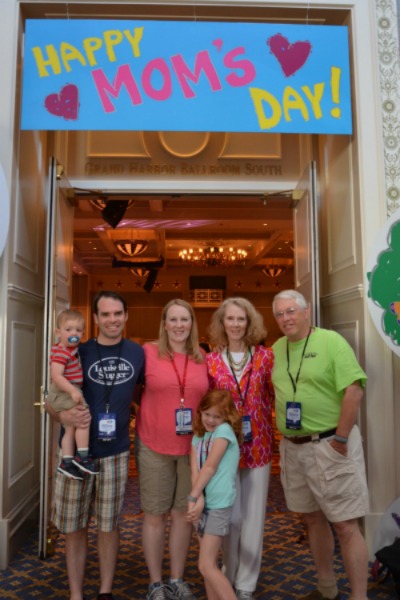 Celebrating Mother’s Day with my mother and father at DisneySMMC.

Disclosure: I was invited to attend the Disney Social Media Moms Celebration and Disney provided me and my family with discounted conference admission, tickets, and lodging.  Disney and its conference sponsors also provided me with additional gifts during the event.  As always, all opinions are 100% my own.  (If you read often, you know I’m a serious Disney fan but I’m also not afraid to call Disney out when they get it wrong!) 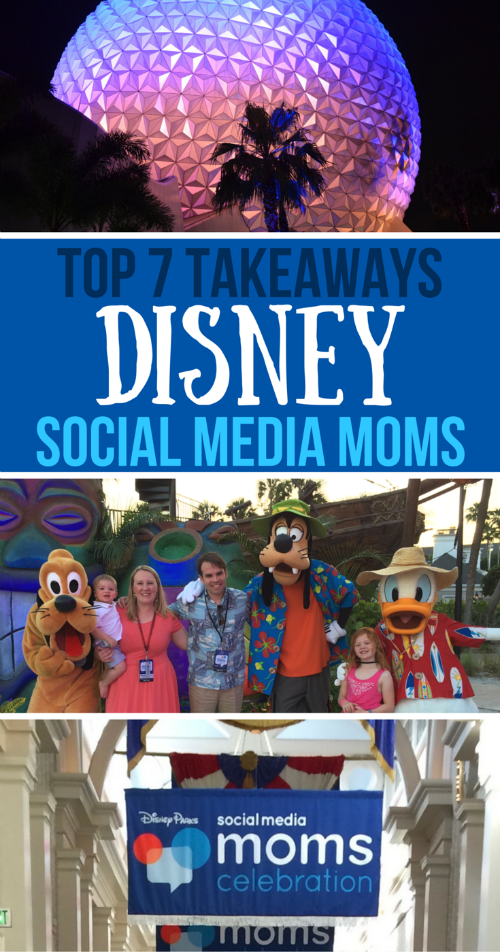 […] On the Road, which was held at Disneyland (#DisneySMMCDLR, for short!). I went to the main Disney Social Media Moms Celebration in Walt Disney World in the spring of 2015, but Disney also hosts several smaller “on-the-road” events each […]

[…] provided me and my family with discounted conference admission, tickets, and lodging as part of the Disney Social Media Moms celebration. As always, all opinions are my […]

Walt Disney World Memory Maker Review: Worth It or Waste of Money? - Trips With Tykes

[…] Disney World provided me with a free Memory Maker pass on my last trip to Walt Disney World for the Disney Social Media Moms Celebration.  I have purchased Memory Maker and other Photopass services many other times at many Disney […]