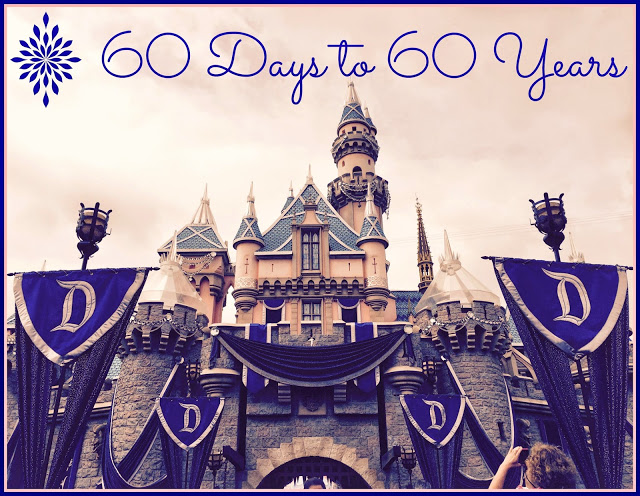 Disneyland is in the midst of a major celebration: its 60th Diamond Anniversary.  Given how much I love Disneyland, the moment couldn’t go unnoticed here on Trips With Tykes.  To celebrate the big event, I’ve joined together with 60 Disney-loving bloggers led by Didi Marie of DisTherapy and Gayle Turner of Disney Gals to commemorate each year of Disneyland’s history.  Each day, a new blogger chronicles the important milestones in a particular year at Disneyland.  Follow along using the links below.  There is a post a day for 60 straight days until we reach the big anniversary day on July 17! 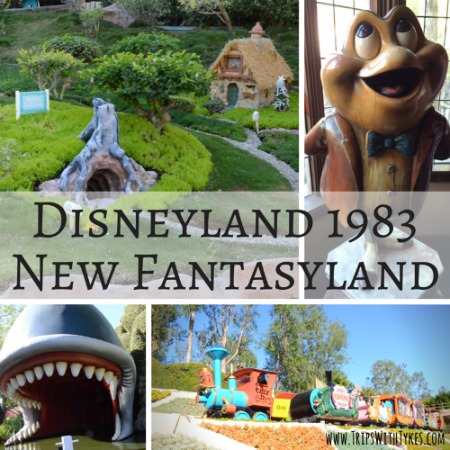 The year 1983 was a major milestone in Disney history for many reasons.  In April of 1983, Disney opened its first international theme park at Tokyo Disneyland.  The year also brought what is the now-classic film Mickey’s Christmas Carol to audiences everywhere.  Additionally, Disney launched a major cable TV undertaking with the launch of the Disney Channel.

Even with all these expansions and innovations, Disney certainly didn’t neglect the United States parks at the time.  On May 25, 1983, just a few weeks after the opening of Tokyo Disneyland, the Anaheim Disneyland gates were opened to reveal a brand new Fantasyland to the world.

The changes were significant and dramatic. Gone were the bright medieval festival facades that some critics joked were glorified painted plywood.  These old facades were replaced with new stone and woodwork that made the area look more like a European storybook village.  Rides were moved, removed, and added, forever transforming the entire area of the park to look much like we know it now.

Famous Disney Imagineer Tony Baxter explains the thoughts behind the Fantasyland transformation in this video:

Change at Disneyland is always a risky proposition.  Disney evokes memories of childhood and deep nostalgia.  But the changes made in 1983 were received quite positively by Disney fans.  The changes to Fantasyland mostly felt like a completion of Walt’s vision rather than a modern betrayal of it.  The conventional wisdom was that Walt had always intended to make Fantasyland look more whimsical.  Budget overruns on the original park, however, forced a change in his plans.  The 1983 changes seemed finally to make Fantasyland complete.

And for new generations of Disney fans, including me and now my own children, the “new” Fantasyland of 1983 now brings us nostalgia and happy Disney memories.

So just what exactly were these transformations?

As with all major transformations in Disneyland over the years, the Fantasyland renovation meant the end of an era for several major attractions. 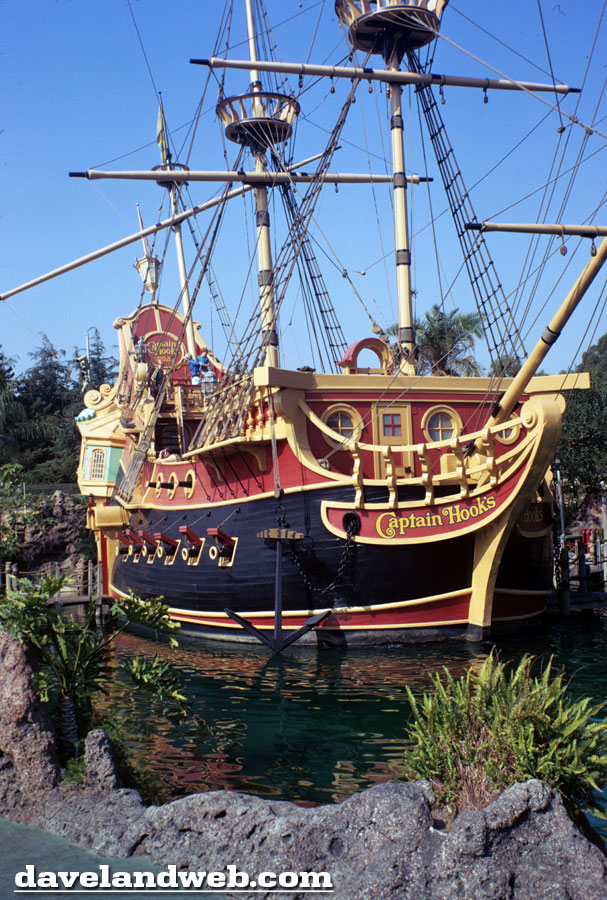 The most notable of these were the Pirate Ship Restaurant and Skull Rock.  The Pirate Ship Restaurant was a Disneyland original, serving guests all the tuna they could eat (Chicken of the Sea was an early sponsor).  The original plan for the renovation was to move the ship elsewhere, but that plan either proved too logically difficult or too expensive to make it worthwhile.

The Fantasyland Theater next to Snow White’s Adventures had also closed two years prior in anticipation of the Fantasyland renovation to make way for a new attraction.  Keep reading to find out what became of this space.

The attractions that survived the cuts were not without significant change.  In fact, most did a bit of musical chairs of their own.  The removal of the Pirate Ship restaurant opened up a space for Dumbo’s new home.  Dumbo had previously been  placed off to the left side of Fantasyland.  It’s new location was directly in line with the carousel and castle entrance. 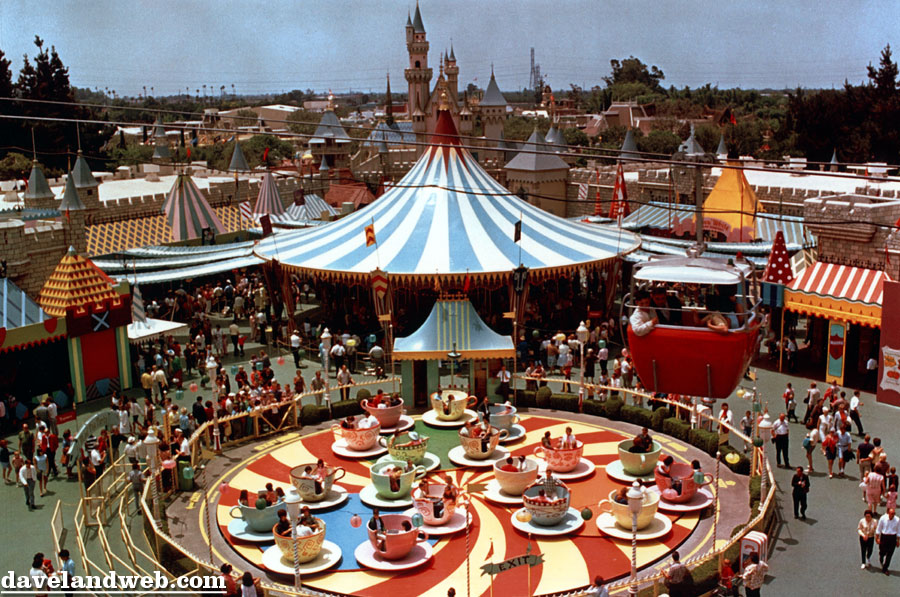 Photo provided with express permission from Davelandweb.com. All rights reserved.
This photo of Fantasyland pre-1983 shows the tight line of the castle, carousel, and teacups.

King Arthur Carrousel and Mad Tea Party moved as well.  Both had previously been squeezed into the tight space directly aligned with the castle.  Increased crowds at Disneyland required more space for guests to flow freely around these attractions.  The carousel was therefore moved back into the space previous occupied by the teacups.  The teacups were set off to the right hand side of Fantasyland next to Alice in Wonderland where they stand today.

Attractions that were not moved got facelifts and new special effects.  Snow White’s Adventures was transformed into Snow White’s Scary Adventures with the heroine herself finally making an appearance in the ride (the previous version of the ride told the story from her point of view, so she was not visible). 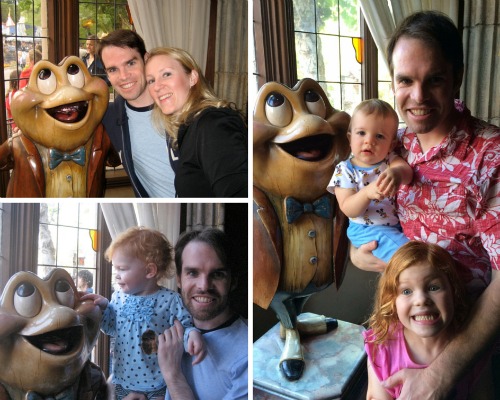 Making family memories through the years in the new version of Mr. Toad’s Wild Ride.

Mr. Toad’s Wild Ride was gutted and replaced with a new track and even new scenes.  Peter Pan received a few minor internal upgrades in addition to its glorious external transformation. 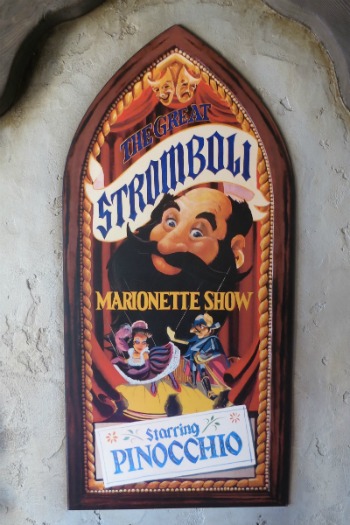 The 1983 Fantasyland renovation also brought a few new additions to Fantasyland.  One of these, Pinocchio’s Daring Journey, fits in so well with the Fantasyland theming that many guests today assume it is an original dark ride. 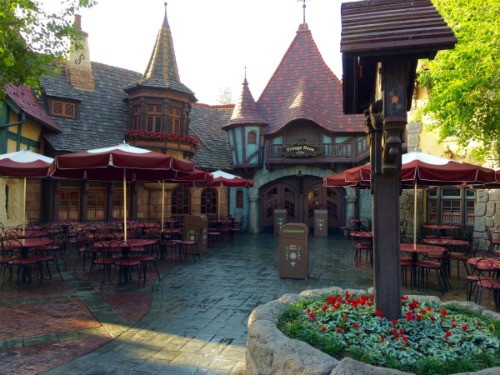 To go along with the opening of Pinnochio, an adjacent European-inspired restaurant opened next door.  Known then as Village Inn (and now as Village Haus), the restaurant served pizza and burgers, similar to what it serves today.

The opening of new Fantasyland brought a new parade to Main Street just a month later, the Flights of Fantasy Parade.  The parade was short-lived, running only from June 18 to September 10, 1983.

Want to see all these changes in action?  This video has magnificent time lapse shots of the Fantasyland construction.  Keep watching for the new Fantasyland opening day ceremony and action shots of the new rides and Flights of Fantasy parade.

Read all of the 60 year anniversary stories on DisTherapy!

60 Years of Disneyland History in a Nutshell! - This Fairy Tale Life

[…] 1983 – “New” Fantasyland re-opens with a complete facelift, a re-arranged layout, and new attractions including Pinnochio’s Daring Journey and the Village Haus restaurant. Little Mindy makes a triumphant return to Disneyland for her second visit and gets this Jazzercise inspired sweatband, which I still have. (Trips with Tykes) […]

60 Years of Disneyland History in a Nutshell! - Budget Fairy Tale

[…] 1983 – “New” Fantasyland re-opens with a complete facelift, a re-arranged layout, and new attractions including Pinnochio’s Daring Journey and the Village Haus restaurant. Little Mindy makes a triumphant return to Disneyland for her second visit and gets this Jazzercise inspired sweatband, which I still have. (Trips with Tykes) […]

SO much awesome happened in 1983 for TWDC! We LOVE Fantasyland. My favorite rides include it's a small world and Peter Pan's Flight. I was so sad that our last trip Peter Pan's Flight was being refurbished, but I am pretty excited to see what is updated! Great post, Leslie! Thanks for sharing!