24 Hours in San Francisco: The Perfect 1 Day Itinerary for Families

San Francisco is certainly a destination worthy of a week or more. As a local in the Bay Area, I always recommend that visitors come and stay awhile, taking a few day trips around Northern California on a longer vacation. But sometimes you just don’t have the time. Luckily, there is so much than can be accomplished in a single day in San Francisco, even with kids in tow. Here is how to get a taste of the City by the Bay’s many flavors in just 24 hours with this step-by-step 1 day itinerary. 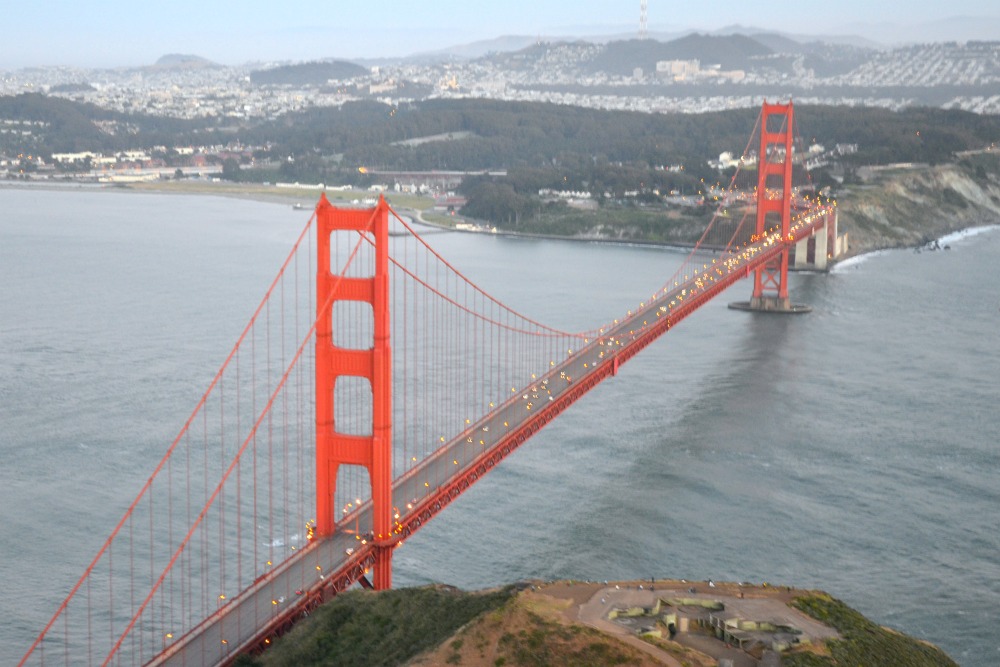 Top tips for San Francisco in a Day

The key to a successful visit to San Francisco in a single day is to stick close to downtown. While there are so many worthy attractions farther afield, you will simply lose too much time in transit hopping all over the city. Sticking to the iconic inner neighborhoods like Chinatown, North Beach, Fisherman’s Wharf, and Union Square will allow you sample a diverse offering of attractions with minimal time wasted.

While San Francisco has ample public transit, it can sometimes be a bit slow or just not easily serve where you need to be. As the founding city for both Uber and Lyft, ridesharing services are alive and well in San Francisco. And they are cheap! If you only have a day, paying to take a few Lyft and Uber rides is often well worth it for the time saved.

You can also do this itinerary with a car of your own, but parking in some neighborhoods is a challenge unless you pay the big bucks for garages. If you have babies and toddlers too little for Lyft and Uber without a car seat, I’ve indicated public transit alternatives when available. (But do check out my guide to travel-friendly car seats and boosters, because purchasing one of those products may make ridesharing possible even with little ones!) 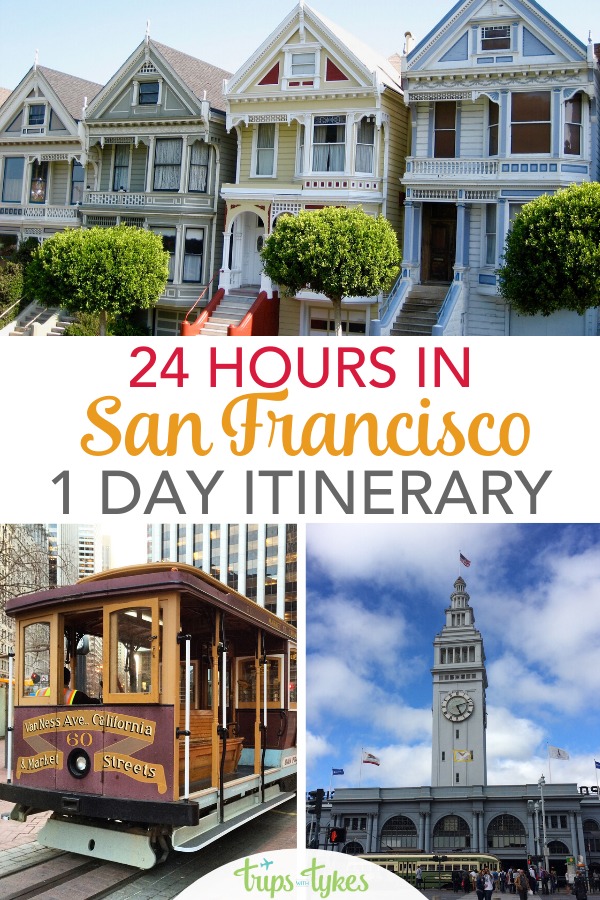 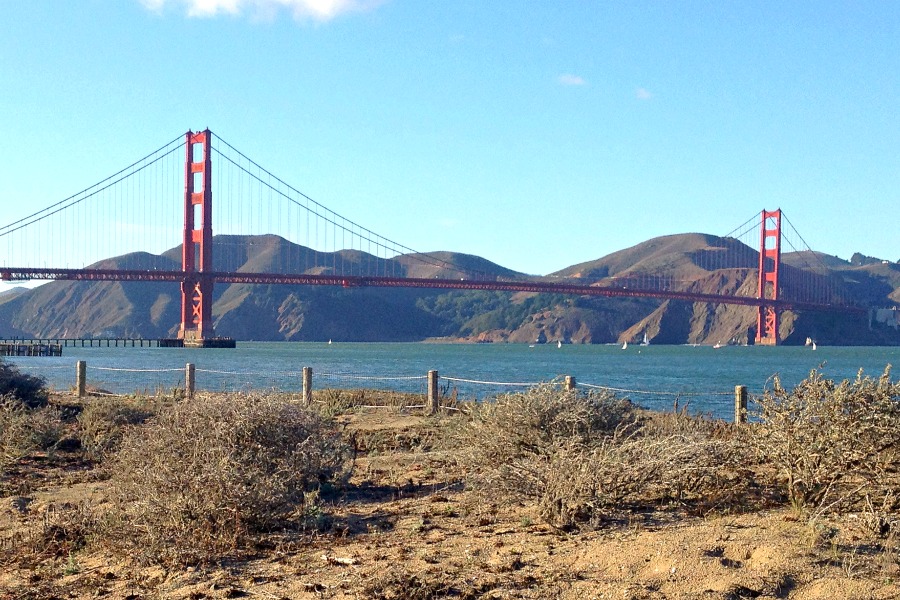 Start your morning with a view of the Golden Gate. Head into the Marina District to Crissy Field where you can see the majestic bridge up close. Start at the Warming Hut for the best views and a quick coffee and breakfast pastry (it opens for business at 9 am daily).

Mornings in San Francisco are sometimes quite foggy during certain times of year. Watch the weather to make sure you at least have enough visibility to see the bridge. Often the fog and clouds billowing around its reddish orange spires make for even better photographs than on a perfectly clear day. 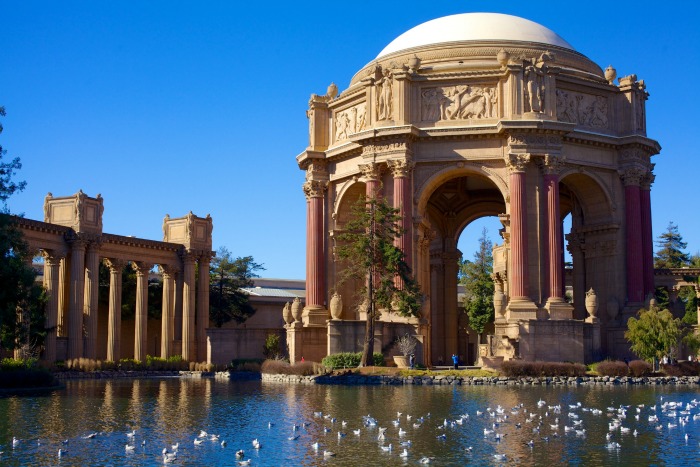 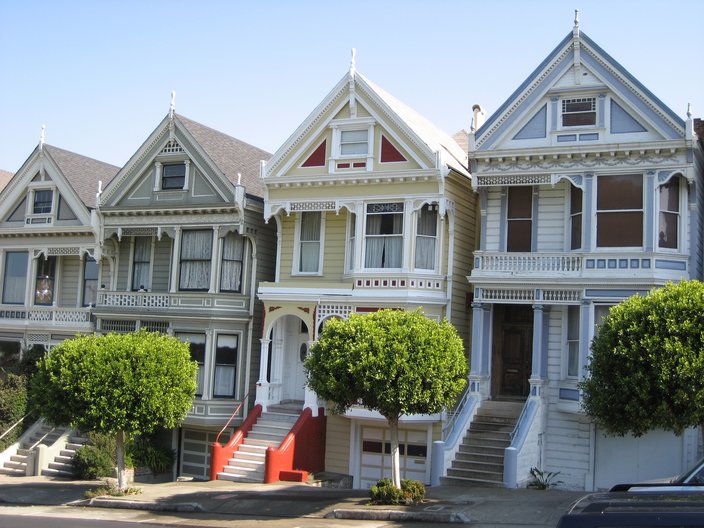 Can you really go to San Francisco without getting a photograph of the world’s most photographed Victorians? No way. Grab a quick Uber or Lyft from the Palace of Fine Arts up and over a few hills where you will find the Painted Ladies of Alamo Square. Yes, these are the buildings that have a starring role in the credits of the 1980s sitcom Full House.

(Note: If you are using public transportation on this itinerary, it may be wise to skip this stop as it takes you a bit out of the way with fewer transit connections. If you skip Alamo Square, it’s easy to take the 28 Muni bus line from near the Palace of Fine Arts and arrive within three blocks of the next stop, Lombard Street.) 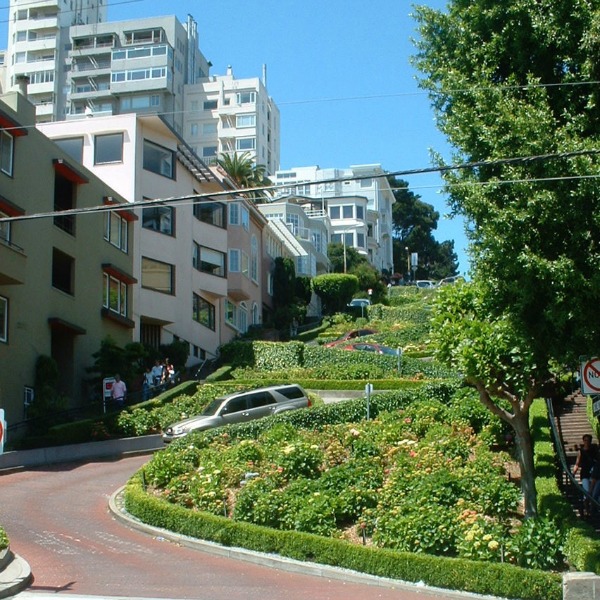 Another short Uber or Lyft ride will deliver you next to Russian Hill and Lombard Street (direct your driver to the corner of Lombard and Hyde). Walk down the sidewalk steps of “the crookedest street in the world.” 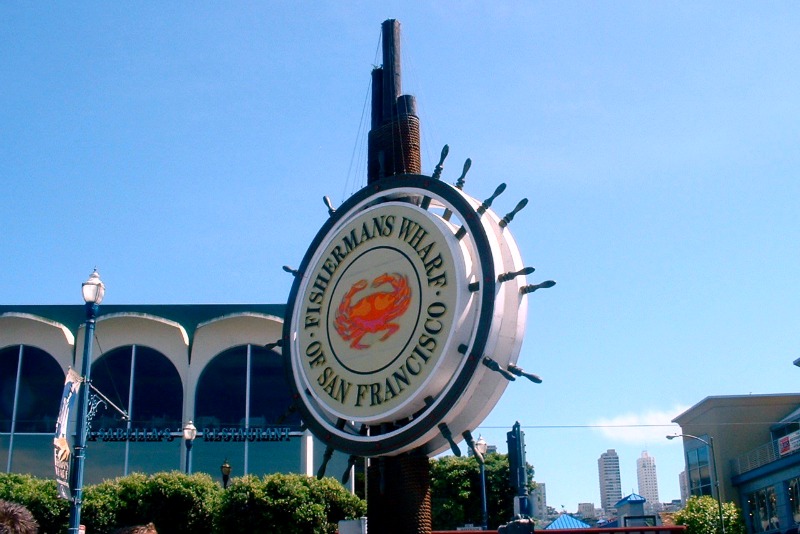 From the bottom of Lombard Street, it’s just a 10 minute walk along Leavenworth Street (downhill!) to Fisherman’s Wharf. Head north in the direction of the water – you can’t miss it. Then turn right on Jefferson to walk along the waterfront.

Even though the Wharf can be a tourist trap, there are a few things worthy of doing on a short visit. Watch the strange street performers and snap your selfie at the famous ship’s wheel sign on Taylor and Jefferson.

If you are getting hungry at this point, plan for lunch at Boudin Bakery (160 Jefferson St.) where you can enjoy San Francisco sourdough. The classic dish every first timer must order is clam chowder in a sourdough bread bowl. Lines can be long during peak tourist season during the lunch rush, but the experience is well worth the wait. 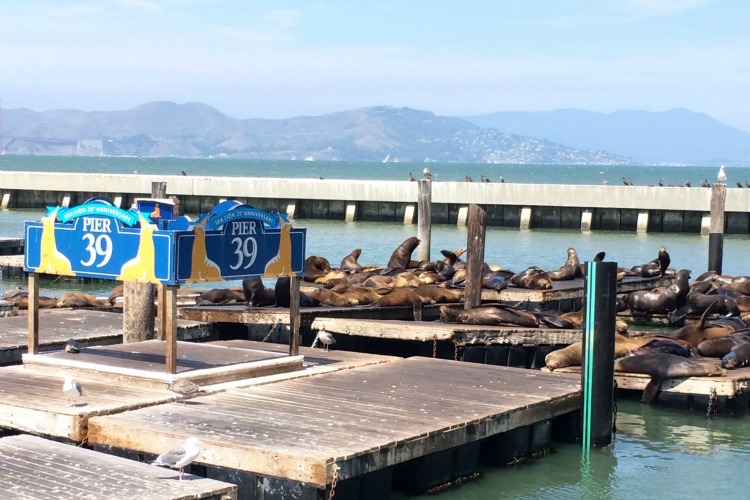 Finish your tour of Fisherman’s Wharf at Pier 39 (Beach Street & The Embarcadero). There, you will spot San Francisco’s sea lions sunning themselves on the docks and get a glimpse of Alcatraz out in the bay. If you are touring with children, be sure to take a few extra minutes to ride the double-decker carousel at the end of the pier too. 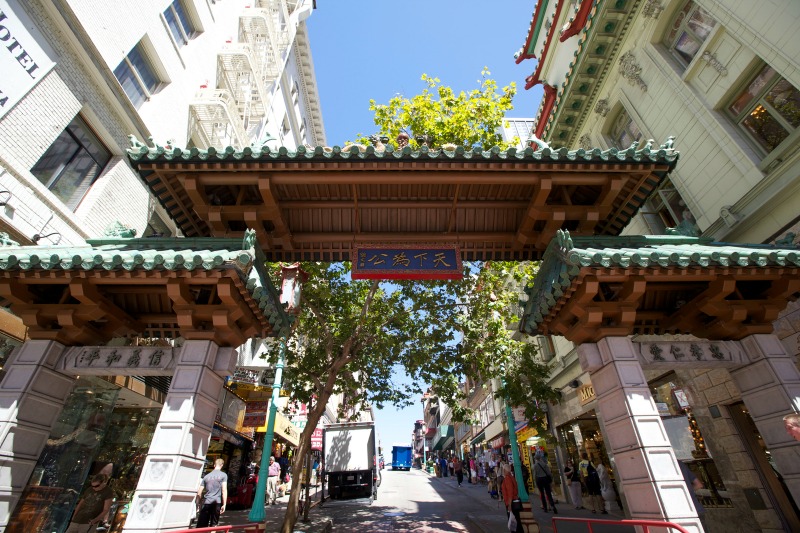 Now it’s time for that cable car ride you’ve been waiting for! It’s $7 per person as of November 2019 so it doesn’t come cheap. The Powell/Mason cable car route originates at the corner of Taylor and Bay near Fisherman’s Wharf. You can purchase a ticket from the kiosk at the origination point of this line. Or save time and purchase on the MuniMobile app on your smartphone for the whole family.

Take the cable car to Powell and Bush Street, where you will hop off for a view of the famous San Francisco Chinatown Gate. The gate is just two blocks east down Bush at Grant Avenue. If you have time to wander a few blocks in to Chinatown up Grant, you’ll get a distinct flavor of one of San Francisco’s many diverse neighborhoods. I highly recommend stopping in any of the small dim sum restaurants and sampling a few bites for a snack. 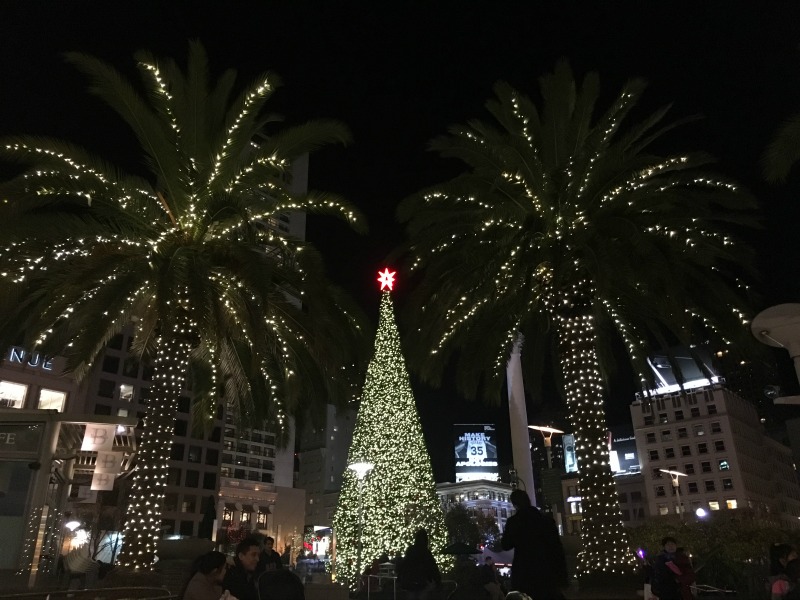 From the Chinatown Gate, walk south on Grant for two blocks and turn right on Post Street to visit San Francisco’s shopping district, Union Square. A Macy’s rivaled only by the original New York store looms large over the square. Numerous boutiques and pricey designers have a presence here as well. Take some time to window shop and see the square itself.

If you happen to be visiting San Francisco during Christmas time, go ice skating at the pop-up rink that appears each winter. Also visit the lobby of the Westin St. Francis (335 Powell Street) on the square to view the castle of suites that the hotel’s pastry chef makes each year.

Corner of the Embarcadero & Market Street 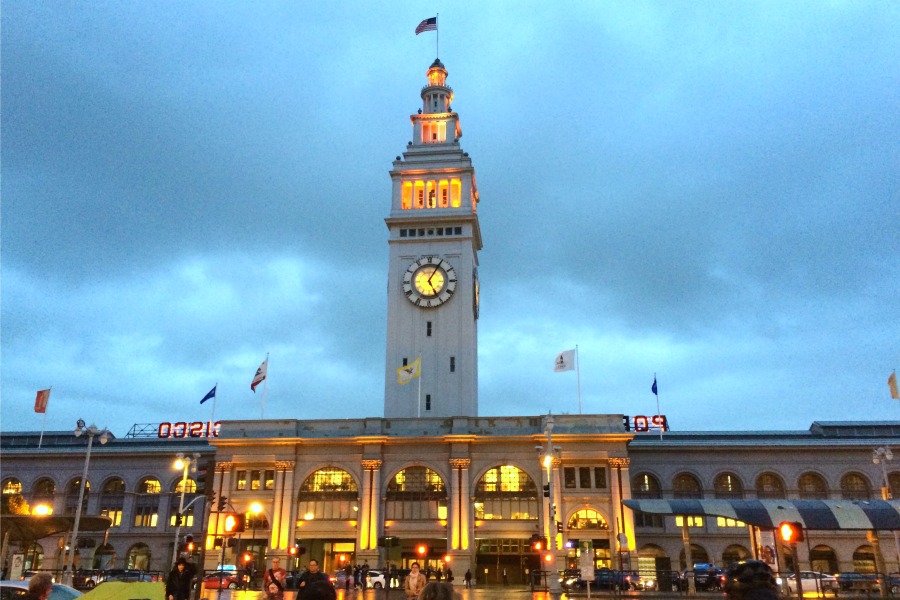 From Union Square, walk two blocks south to Market Street where you can take the other historic street car in the city, the F-Market. Take it heading east towards the water. Your destination is the Ferry Building on the waterfront. The fare is $2.50 and can be paid to the driver upon boarding in exact change. Alternatively, use your MuniMobile app again for easier management for the whole family.

The Ferry Building has a thriving farmer’s market and many specialty food and other shops. If your kids need a pick-me-up, definitely grab an ice cream cone at Humphry Slocombe.

After sampling its wares, you could make the Ferry Building your dinner destination for the end of the evening. For a nicer dinner, make a reservation at the Slanted Door. The restaurant offers a modern take on Vietnamese food and has been one of San Francisco’s best restaurants for more than 20 years.

If you would prefer a quicker and more casual bite, try Gott’s Roadside. Gott’s is a classic greasy spoon with a distinct California twist: locally sourced ingredients, a wine and beer list, and unique dishes like Ahi Poke tacos served alongside burgers and shakes.

Ninth Stop: A Night at the Theater

Various Locations (most are in Union Square or Civic Center areas) 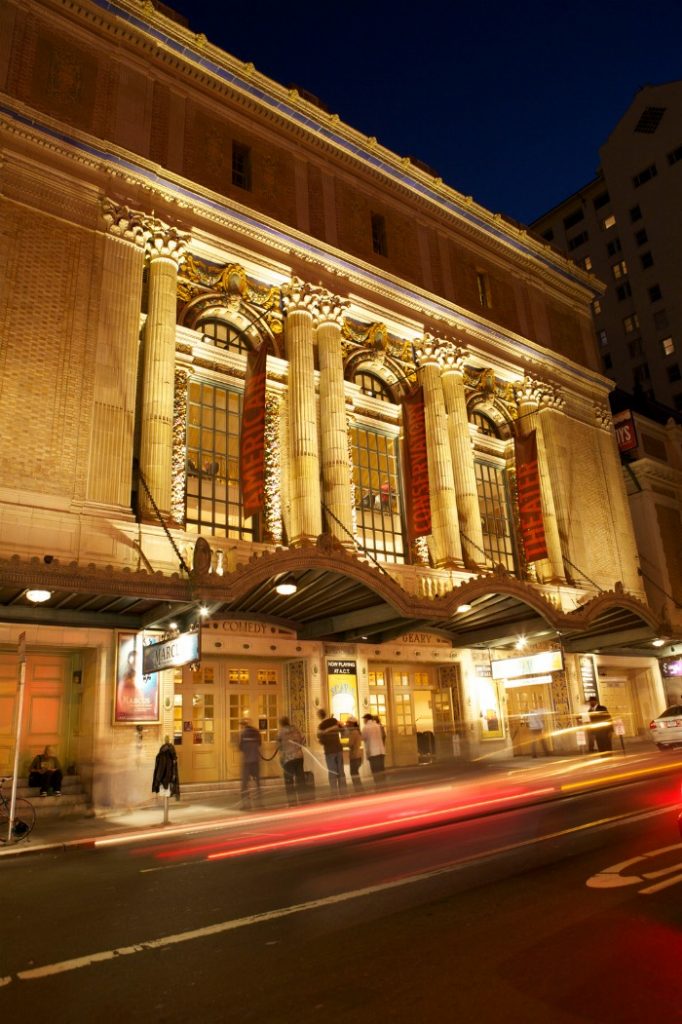 Not tired yet? For a late night out with older kids or without kids, San Francisco’s theater scene is alive and well. Check out the shows offered by BroadwaySF or the American Conservatory Theater (ACT). There’s also the San Francisco Symphony, the San Francisco Ballet, and so much more depending on the night and time of year.

From the Ferry Building, you have transportation choices galore to all of the major theaters, most of which are clustered near Union Square or Civic Center. Hop on either BART, Muni, or the F-Market streetcar headed up Market Street. Most theaters are located a few blocks from this route.

Where to Stay in San Francisco for One Night

At some point, you must sleep after a day as jam-packed as this one. Luckily, San Francisco has a number of iconic hotels with fascinating histories.

If you only have a night, I recommend splurging on more luxurious accommodations that are party of the city’s rich history like the Fairmont San Francisco in Nob Hill or the Westin St. Francis in Union Square. Both will provide memorable accommodations with San Francisco style. 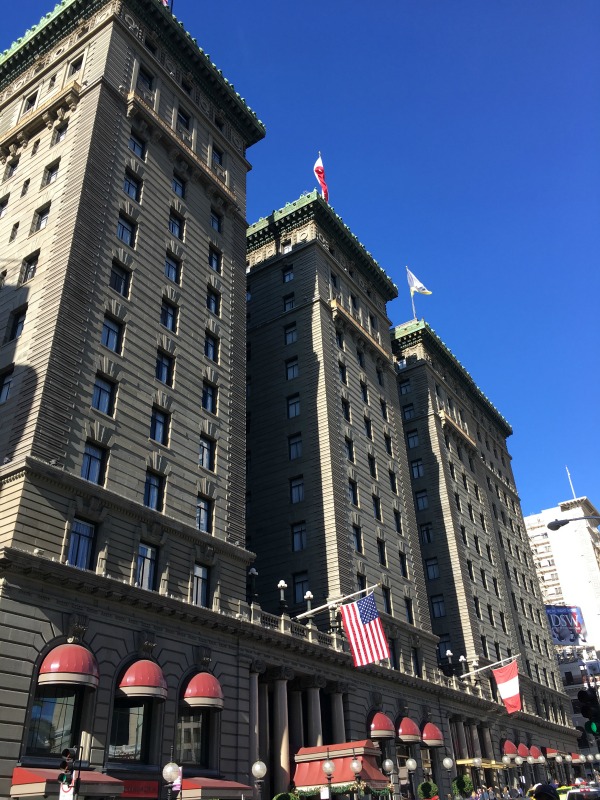 Look soon for a guide to family-friendly hotels in San Francisco that will have even more lodging ideas for the City by the Bay! 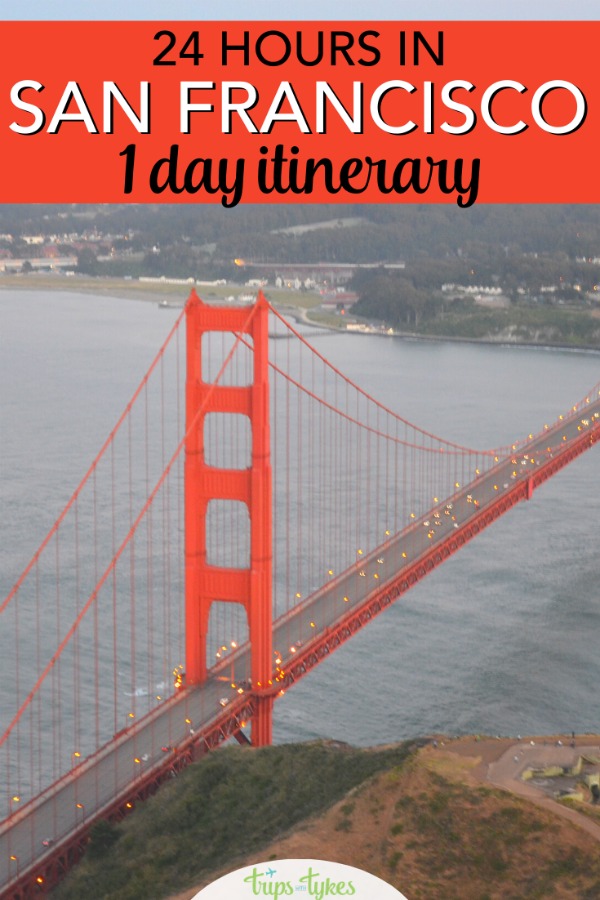 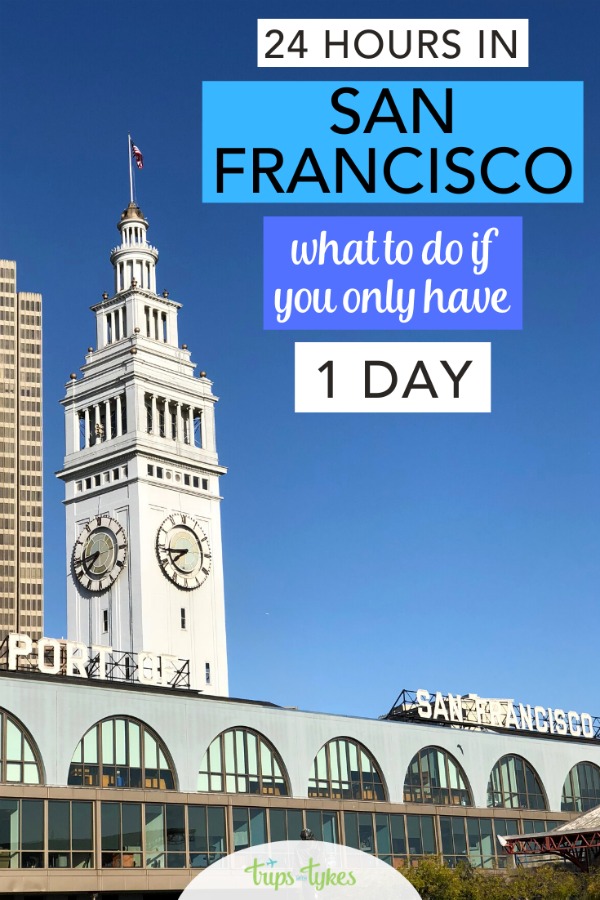 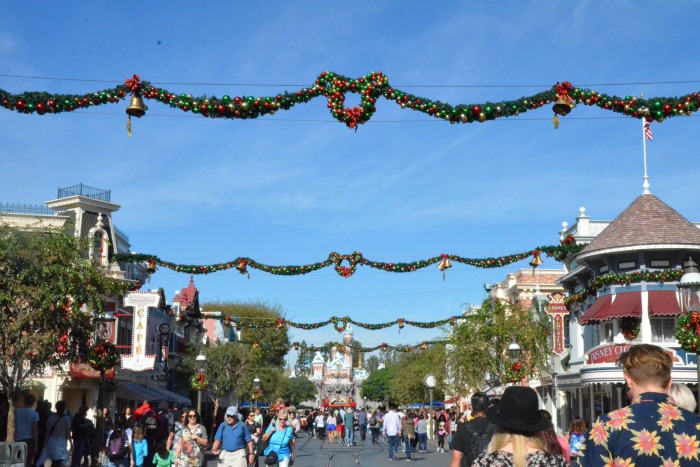 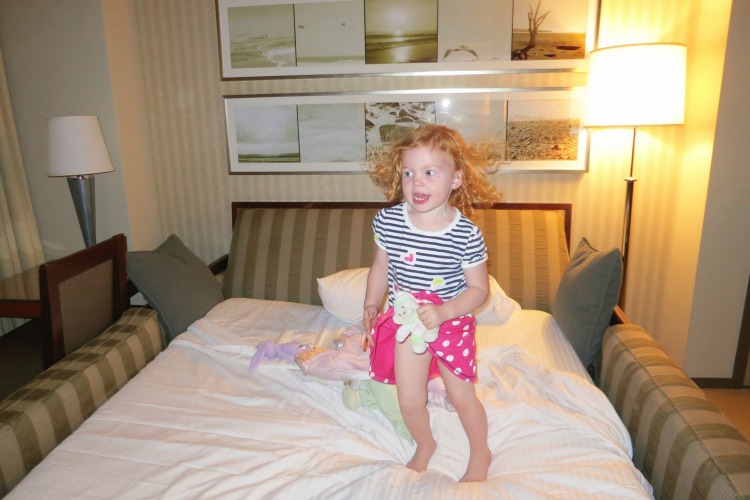 Next
Where Should My Baby or Toddler Sleep in Our Travels?
Click here to cancel reply.

Excellent article. Details for for stops I didn’t think of. Thanks for taking the time to help me plan my trip. ?

I really love to visit San-francisco.

was exactly looking for this!! :)