On our recent trip to Hong Kong, one poignant experience really stood out to me that crystallizes why my husband and I have decided to travel so much with our kids.

During our time at Hong Kong Disneyland, our five year old daughter naturally paid a visit to the Bibbidi Bobbidi Boutique to be transformed into a Disney princess of her choosing.  Later that same afternoon, dressed in her Belle finest, she waited with us to board a shuttle from the Hong Kong Disneyland Hotel to the park.  While we waited in line, our daughter spotted a little girl about her age.  This little girl had been similarly transformed, dressed in beautiful Snow White gown.  Our daughter and this other little girl eyed each other for a half-second and then immediately decided that they were best friends, despite being completely unable to communicate with each other.  They were kindred spirits, language-barrier notwithstanding.  We were able to exchange a few words with the girl’s mother, who knew a bit of English.  We learned that the family was visiting from Shanghai.  The girls shared a giggly ride on our shuttle bus to the park entrance, where we assumed they would part ways.

After we arrived at the park, the girls had other ideas.  They grabbed hands and began walking to the front gates together.  We followed the two pint-sized princesses, snapping photos along the way.  The two girls just didn’t want to say goodbye. 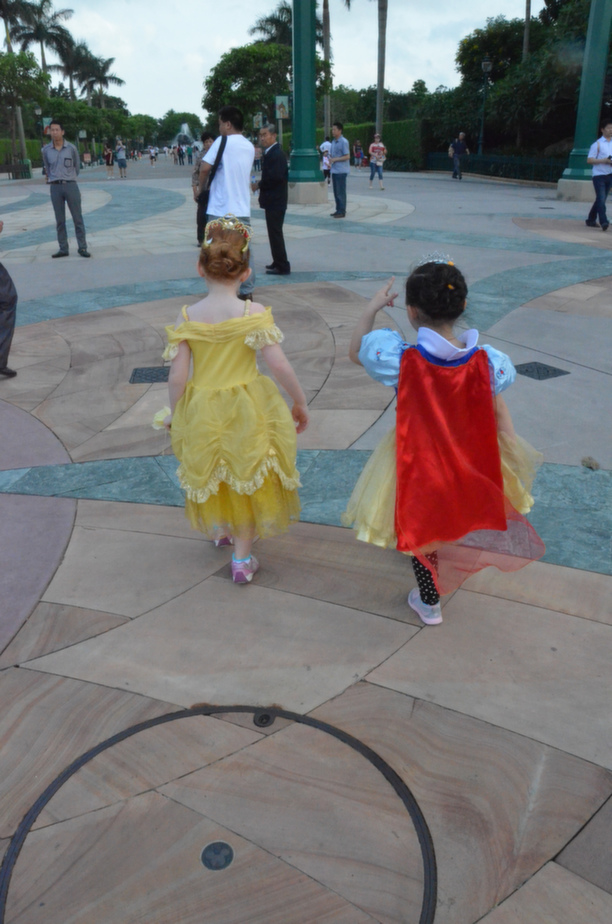 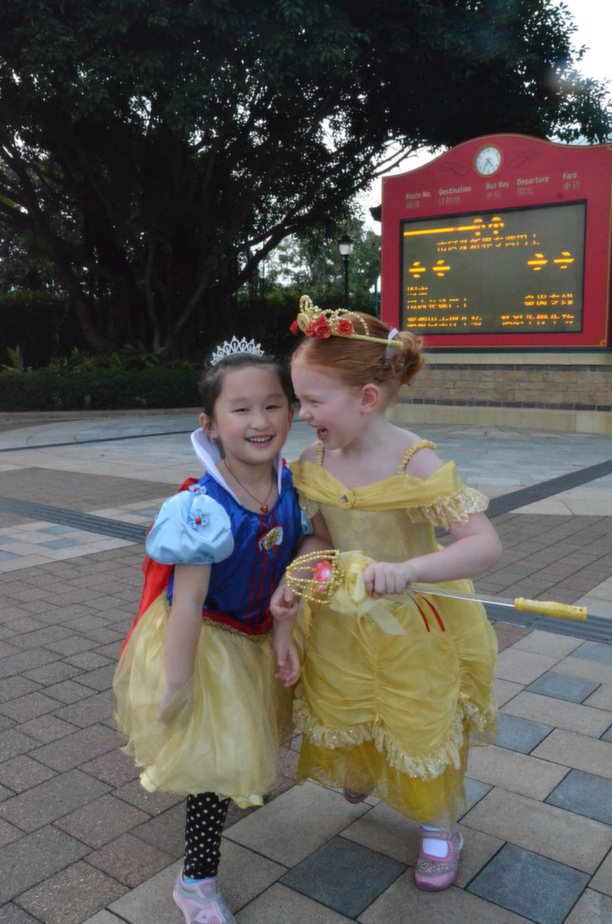 We entered the park with our new friends from Shanghai, where the girls posed for pictures at the traditional Disneyland Railroad photo spot.  We finally managed to convince our daughter to bid her new friend farewell so we could explore the park and ride some rides.  It was almost a tearful parting, but the girls finally hugged and waved goodbye. 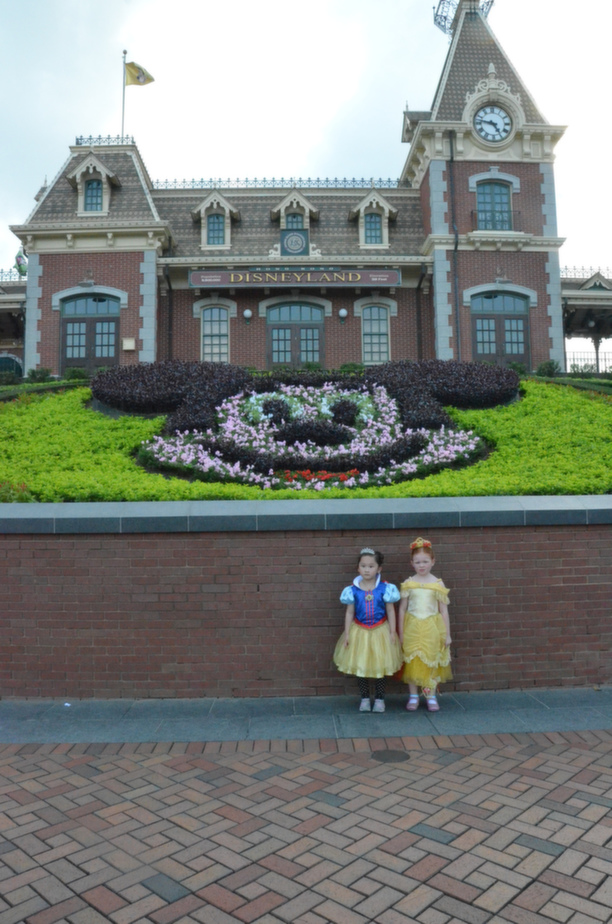 In the two days that followed, we took a break from Disney and decided to explore other parts of Hong Kong.  On our last morning in Hong Kong, our family went to Ngong Ping 360 in order to take the cable car to see the famous Buddha statue there.  As we waited in the ticketing area, the very same little girl appeared right in front of me, smiling and beaming at our daughter!

The two of them could not believe their good luck at having a second chance meeting.  As further luck would have it, the cable cars had been stopped because of inclement weather, so they had a chance to sit and play with each other for about 15 minutes while we waited for the weather to pass. 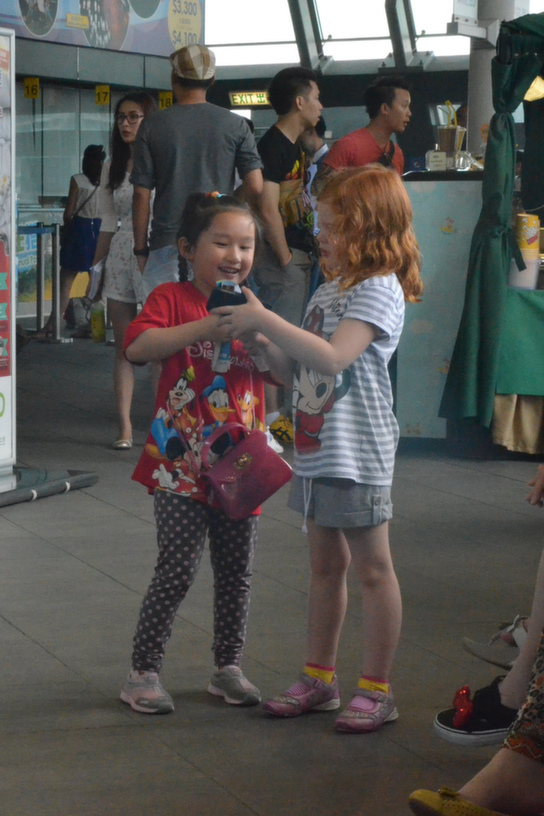 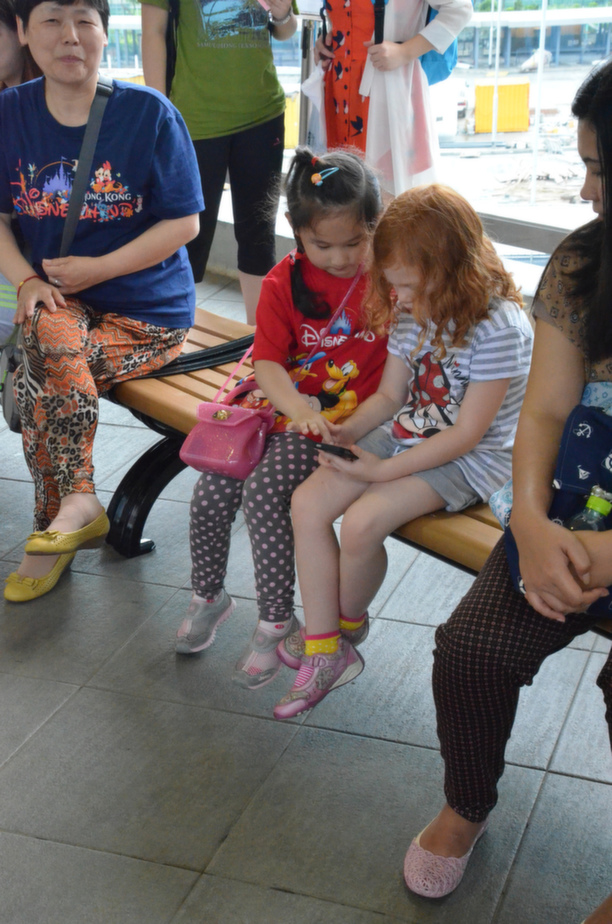 The instant friendship between these two little girls was so pure and easy.  It reminds me how alike all of us are, no matter where we are from or what language we speak.  And this is one major reason we travel — to remind ourselves and teach our children this simple fact.

Maybe Mr. Disney was onto something when he told us “it’s a small world after all.” 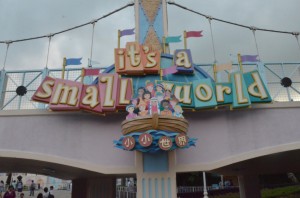 The Benefits of World Travel with Toddlers (& Giveaway!) - Trips With Tykes

[…] in the way of reaching out to others that they meet.  I learned this well when my daughter became fast friends with a girl from Shanghai when we were traveling in Hong Kong, despite the fact that the two couldn’t speak a word to each other.  It turns out the […]

This story makes me more excited for my 4 yr old daughter and I's Hongkong disneyland trip! Thanks for the letting us know that it would be best to reserve a slot for the boutique:) yayn

This is so sweet. I love it!

[…] Why We Travel with Our Kids: A Heartwarming Hong Kong Story […]