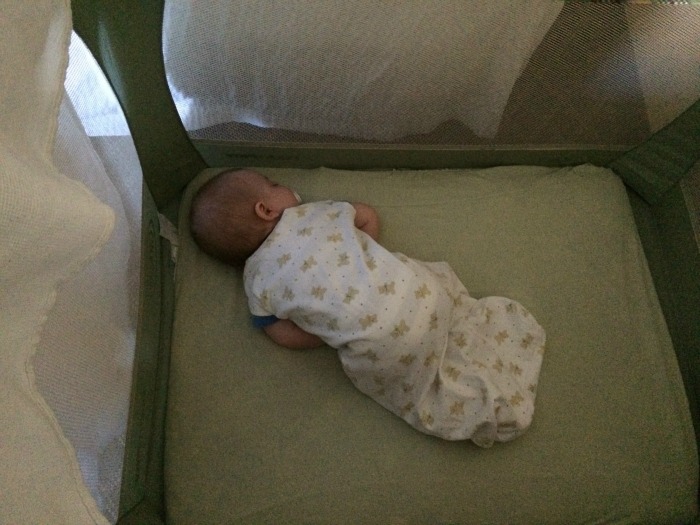 Safe and working Pack N Play on an earlier trip.

When you travel with kids, you expect a few bumps in the road.  Usually it’s the kids who throw the curveballs.  Or the airlines.  Very rarely is it the hotels.  This time for my family, it was the hotel.  The curveball that came our way was more than just bad service – it was a very serious child safety issue that other traveling parents need to watch out for.

At the end of our Christmas travels to Alabama, my family decided to stay the night before our flight home in an Atlanta airport hotel.  We had a very early morning flight out of Atlanta, and has been visiting my family that lived over 2 hours away.  We decided we could get a better night’s sleep and avoid travel hiccups if we stayed at the airport instead of doing the long drive the morning of our flight. 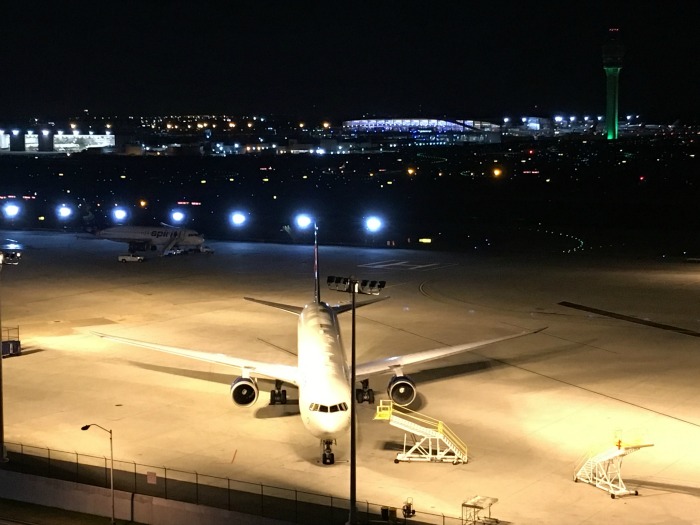 Awesome plane spotting at ATL from our room’s balcony… the calm before the storm.

I booked a room at the Renaissance Concourse Atlanta Airport Hotel.  I choose this hotel for a lot of reasons.  First, it’s located right on the runway and has awesome views of planes landing and taking off.  I like that kind of thing – I’m a bit of an airplane geek.  In addition, I’m a Marriott loyalist (Marriott owns Renaissance) and had a free night certificate (a reward for carrying the Chase Marriott credit card) I could use.   I also chose it because it happened to be the hotel where my husband and I spent the first night of our honeymoon 11 years ago before a morning flight out of Atlanta.  I figured it would be a little bit of nostalgia to return years later with our two kids in tow.

My husband, 6 year old, 2 year old, and I arrived before 9 pm to check-in.  I had requested a Pack ‘N Play or crib on my original reservation, and I also reminded the front desk clerk.  He told me he would make sure one was delivered to our room right away.

After arriving into our room and getting the kids ready for bed, no one had arrived with our Pack ‘N Play.  I called again and the front desk staff assured me that it was on its way.  I called a second…. and a third… and a fourth time within the span of an hour and a half. Each time, I was assured by staff that someone was on the way.  Each time, nothing arrived.  Clearly, no one was on the way. 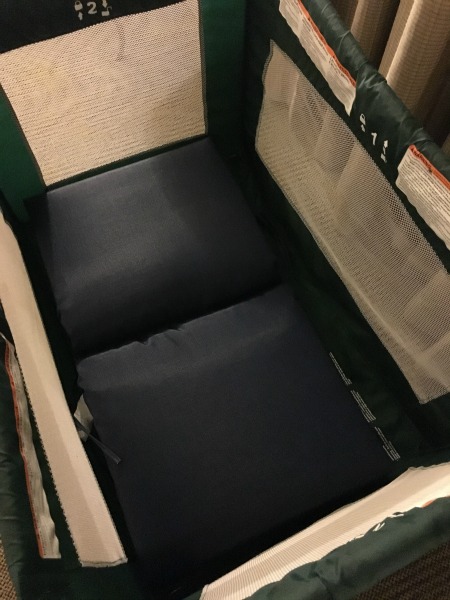 Pack N Play without a mattress – with an ill-fitting pool chair cushion instead.

My husband then decided to go down to the front desk and stand there and wait to carry a crib back to the room himself.   I also tweeted to the hotel in desperation.  Finally, over two hours after we checked in, the same front desk clerk who checked me in delivered a Pack ‘N Play to our room.  It was already unfolded and had linens piled in it.  After he dropped it off and departed, I began setting it up.  To my complete horror and frustration, I discovered that what had been delivered was beyond unsafe. The Pack ‘N Play itself was wobbly and broken but it also was completely missing the original mattress.  Instead, the employee had placed an outdoor furniture chair cushion in the bottom of the Pack ‘N Play to serve as a mattress.  I could see the chair ties and label on the cushion.  This was seriously something from a pool chair. 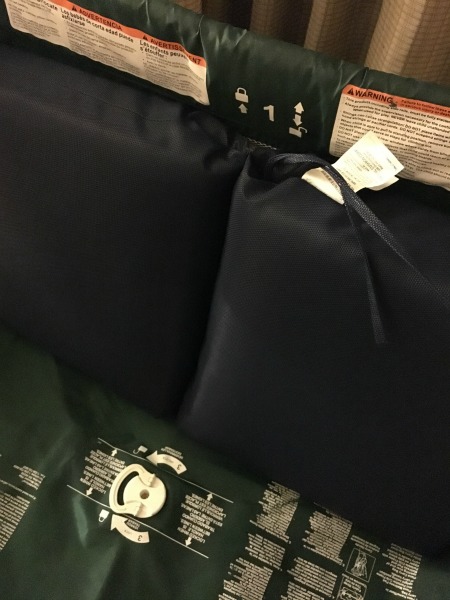 This puffy cushion didn’t fit the device at all, leaving large gaps on either side that a child could fall into and suffocate.  And as all parents know, play crib instructions have explicit warning labels about using anything but the original Pack ‘N Play mattress with the product because of this hazard.

I called my husband (who was still waiting at the front desk) to find another crib.  He found a different employee who was willing to help him.  They began searching for a replacement.  The only two Pack ‘N Plays remaining in the housekeeping stock both were also missing mattresses, which obviously begged the question as to whether other hotel guests had been given unsafe cribs for their kids.

After an additional hour long search, one that had a mattress was finally found (I later learned that this kind employee went to a neighboring hotel to borrow one!).  My husband returned to our room at close to midnight.  We left at 6 am, meaning that three of the nine hours we spent at the hotel was spent searching for somewhere for our toddler to sleep.  Added to that the very concerning matter of unsafe equipment for babies and toddlers, this stay truly topped the list of bad hotel experiences this year.

Naturally, I wrote to Marriott expressing my serious concern after we returned home.  I was heartened to at least receive a very quick response from the hotel manager who was understandably deeply concerned about what happened to us.  He expressed to me that he was a father himself and was well-versed in the importance of proper usage of Pack ‘N Plays and cribs.  He further assured me more than once that the broken equipment had all been immediately discarded and that the hotel had already purchased several new Pack N Plays and talked to the involved employees.  He also kindly credited me Marriott points for our experience – a nice bonus, but frankly I’m happiest about the cribs being replaced!

What to Do If this Happens to You

This experience was a bit of a wakeup call about the risks that can come along with traveling with kids and the vigilance parents need to practice.  I’m lucky that I knew very well what all the pieces of a Pack ‘N Play should look like, but I worried that a parent who had not used a similar piece of equipment might not know and a child could be put at risk.

Parents often talk about the risk of borrowed car seats when traveling, as you cannot know whether a rental car company has maintained them safely or whether they’ve been in an accident.  I’ve rarely seen hotel cribs or Pack ‘N Plays, however, discussed as a potential child safety hazard.

Although I’ve never had a experience this extreme, I’ve certainly had a lot of hotels include improper bedding along with a hotel crib or Pack ‘N Play.  Often I’ve been provided ordinary bed sheets that don’t fit the mattress or fluffy pillows and comforters not appropriate for use with babies and younger toddlers (the American Academy of Pediatrics recommends no blankets or pillows until your child is at least 12 months due to the risk of SIDS).  These too present sleeping hazards. 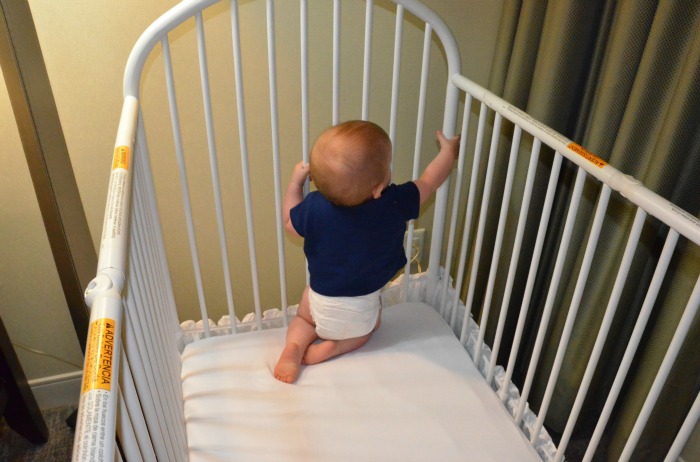 Kudos to Westin hotels for providing safe baby sleep – we’ve always had excellent safe (and real) cribs in all of our Westin stays.

With this experience in mind, here are a few tips for keeping your own kids safe and to help keep others safe as well:

Have you ever received unsafe child equipment while traveling?  I’d love to hear your experiences and what happened! 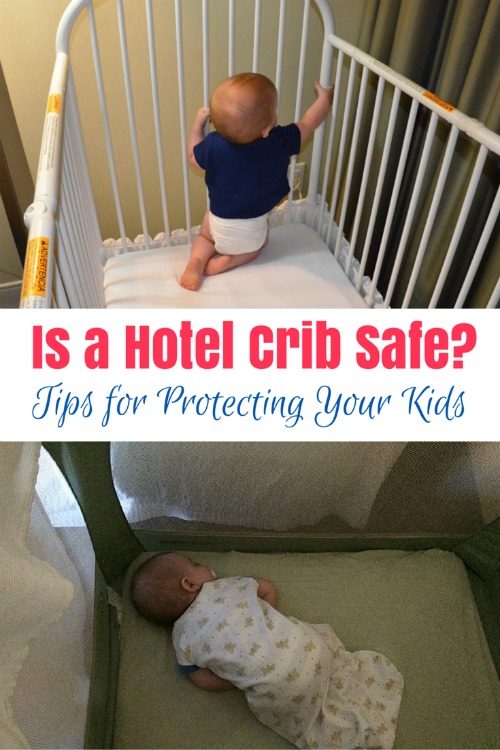 So sorry you had this experience!

I recommend renting pack n plays and cribs from Babyquip. They are clean, always in excellent condition, and come with properly fitted linens!

When I traveled with my then 5 month old to Barbados we stayed at a 3 star hotel with my in-laws and the crib they provided was very old and the mattress was on a weird incline. Since I was there by myself and I had a Queen bed against the wall, I put her on the bed with me close to the wall.

After this experience I got the Kidco PeaPod which was a lifesaver when traveling to places I knew she would not have a safe place to sleep (which I would never expect on a Renaissance!).

Good idea on bringing your own Pack'n Play fitted sheet as I rarely see them in hotels.

I honestly feel like the pool chair cushion in place of the original safe mattress was intentional by employees and by previous parents staying at the hotel. I will guarantee you that parents have complained about how "hard" the pack n plays were which is why none of them had the original mattress. Unfortunately, most parents do not care about safe sleep. They want their kid to sleep and will do anything to get them to sleep, even if it's dangerous. I struggle with this when I see loved ones that have their little ones sleeping dangerously. They act like I'm being crazy.

I just got my baby to sleep at 1am because upon a late arrival at a Hilton affiliated hotel, the sheet they provided (while surprisingly a crib sheet) was way too big for the provided play yard. I had to run to Walmart to buy a proper fitting one.

Last month, I stayed at a Home 2 Suites in Hackensacken, NJ to find one of the wooden slats in the mattress broken. I had put my six month old in it upon arrival while I ran to the bathroom to suddenly hear her screaming - she had fallen into where there was not a wooden support and had gotten stuck. When I called to tell them, they said there weren't anymore available and suggested to put a pillow in it. When I told them how unsafe that was and how illegal it was to be providing cribs not up to federal safety guidelines, they then suggested that she sleep on the pull-out couch. Remember, this is a six month old, not a toddler. I pushed and pushed and told them they'd be reimbursing me for the purchase of a new pack and play and mentioned that it would be cheaper than the lawsuit they'd be in if my child got injured or even worse, died in the "crib" they gave us. A folding wooden crib arrived within the hour.

I've still been trying to get a hold of corporate to express my concerns. I avoided talking to the General manager the next day only because my fiancé is technically a Hilton employee so I didn't want to risk hurting his job or anything.

I'm really happy you spoke up and they replaced these. I'm sorry it happened to you, but like you mentioned, glad that you recognized the safety issue and helped correct it.