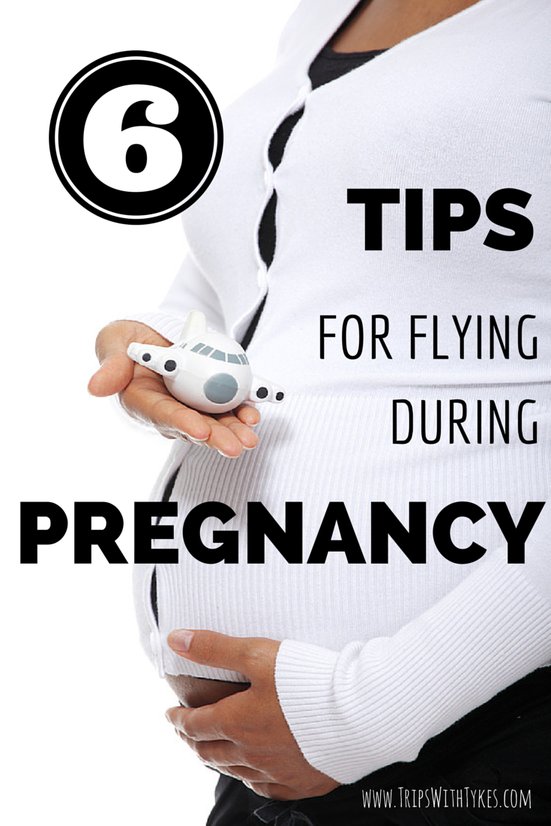 As I recently announced, I’m expecting baby #2 this fall.  I have one final cross-country trip planned when I’m 29 & 30 weeks pregnant (updates to follow in a post later this summer).  When I was expecting Little V, I had to travel cross-country at 34 weeks because my little sister was getting married.  Barring a real health issue with that pregnancy (and luckily there wasn’t one), my sister’s wedding wasn’t something I was going to miss!   Life goes on even when you are pregnant, and sometimes you want or need to fly.

That said, it’s still no fun flying these days most of the time, and it’s even more no fun when you are uncomfortable, very pregnant, and squished into economy class seats.  That said, here are a few tips I picked up with my first pregnancy and during my most recent travels while in the middle of this second pregnancy:

1) Travel up front if possible

If it is within your budget, this is definitely the time to spring for first or business class seats (or cash in some miles to get them) so you can be comfortable and get good food and drink service.  If you are traveling late in your pregnancy, you often will have the added benefit of having refundable tickets if you purchase first class.  This protects you in case you have an unexpected pregnancy complication and have to cancel your trip.  We booked Delta’s domestic first class for my flight at 34 weeks, and we were glad to have done so.  I told my husband at the time that I found the experience more comfortable than sitting at my office desk on a regular work day, which is where I would have been if I had not taken the trip.

2) Get an aisle seat

If you are traveling later in your pregnancy, you are going to be up and down a lot on a longer flight.  Why?  First of all, you are probably going to need lots of bathroom breaks.  Second, pregnant women are at higher risk for blood clots, and that risk is magnified during air travel.  It is smart to get up and walk at least once an hour to reduce your risk.  I recently had to fly in a window seat, and was lucky that the aisle occupant was a mother of a six-month-old, so she was very accommodating of my need to be up and down multiple times.  But I wouldn’t choose that again unless I was really in a pinch.

When I flew at 34 weeks, no one questioned me or gave me a second look, but it is a good idea to have a note from your doctor approving you to fly when you are in the later stages of pregnancy.  Why?  Because many airlines have policies that restrict you from flying the last few weeks in your pregnancy.  And how is a random gate agent realistically going to tell the difference between someone who is 34 weeks and someone who is 38 when we all carry babies differently?  It is smart to have this extra paperwork to ensure that you will be allowed on the flight.  I’ve never had to show it, but there is a first time for everything. 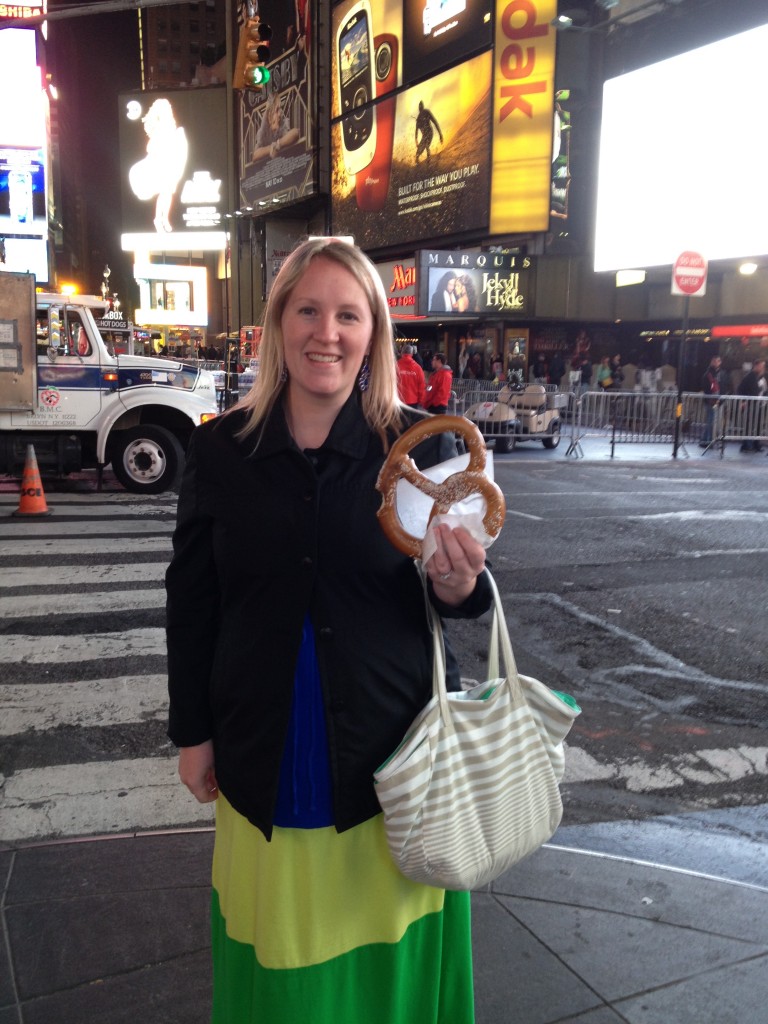 My pregnant belly & I visit Times Square (where we – of course – got a snack!)

There is nothing more frustrating that being a hungry or thirsty pregnant lady.  Bring some snacks and a water bottle along so your needs will be met even when travel throws you a curve ball.  This is even more important because pregnancy and air travel can both dehydrate you.  You don’t want to be stuck in a tarmac delay for an hour or two with nothing to drink or eat!

And a word of warning — think about what you pack to eat and drink.  On my last trip, I packed a peanut butter sandwich, avoiding my usual deli sandwich (doctors sometimes tell pregnant women to avoid lunch meat).  I thought peanut butter would be an acceptable non-perishable alternative.  We ended up having someone with a peanut butter allergy on board sitting in the seat immediately in front of me, and the flight attendants made an announcement requesting that all passengers refrain from eating peanut products.  Desperate, I confided in one flight attendant that my peanut butter sandwich was all that I had brought and that I was pregnant.  She happened to be a new mom herself, and took pity on me.  She raided the food cart and brought me a complimentary alternative.  Thumbs up to that super-sweet Delta flight attendant somewhere out there flying the friendly skies…

I almost always fly direct routes when the prices are even marginally competitive, but when you are very pregnant and flying a long way, it might be helpful to break your trip up a bit by having a plane change.  It often helps to  really stretch your legs by walking through an airport, where you can also grab some much-needed snacks.  Pregnancy might well be the one time to grab one of those slightly cheaper (but usually more inconvenient) fares that involve a change of planes.

There has been a lot of fuss out there in the travel press about the newer TSA scanning machines, the levels of radiation they emit, and whether they are safe for everyone (much less pregnant women).  At many larger airports, passengers are now being directed to one of two options – millimeter wave scanners or backscatter machines (see photos here) – instead of the usual old-school metal detectors.  Although I believe that they are probably safe, I don’t want to take any chances when pregnant, so I “opt out” when asked to go through one of these machines while traveling during pregnancy.  In some instances, this has meant that I get the dreaded full body pat-down, but that choice is worth it to me.  In at least one case (JetBlue terminal at JFK), an accommodating TSA agent allowed me to go through the regular metal detector instead.  If this matters to you, stand your ground and choose an option that makes you comfortable when pregnant.

Have you flown late in pregnancy?  Please share your tips for making it a successful trip in the comments.

I flew to NYC at 29 weeks pregnant, and I must agree with your comment about flying JetBlue. My husband and I always fly JetBlue when possible simply because of the extra room, but yes the TSA agents were very nice before I even had the chance to say anything they pulled me out of line and sent me through the regular metal detector.

[…] dad of twins!  So it goes without saying that he and his wife have been learning their stuff about travel during pregnancy.  Yesterday, he put together a very comprehensive post detailing all the concerns and issues that […]

Great advice! I have a post like this in the works as well, since I traveled a lot when I was pregnant with my first!