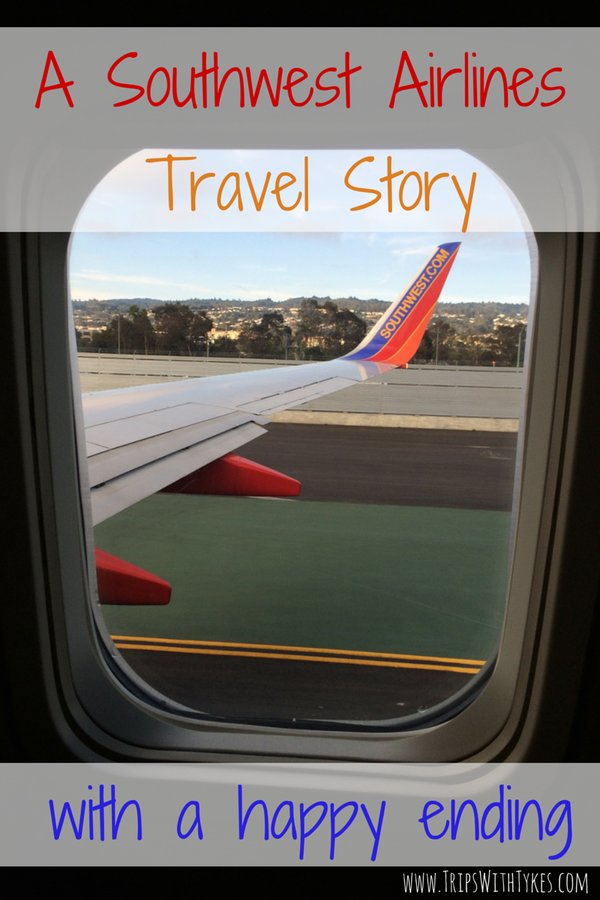 As any frequent traveler will tell you, even the best of airlines can have a bad day.  Sometimes, the weather gods conspire or a rogue employee’s bad attitude turns an ordinary trip into a painful delay or a poor customer service experience.

I write often about how much I love Southwest Airlines for family travel.  During my Presidents Day travels with my family, however, everything was shaping up to create what looked a really bad travel day aboard Southwest.  I began writing headlines for this post in my head: “Marooned in Midway,” “Southwest Snowstorm Strands Us,”  and even “How Southwest Made a Calculated Operational Decision That Flight Connections for 60 Orlando Passengers were More Important than Mine.”  (The last one isn’t that catchy, I know.)

But this story has a happy ending and a better headline, as you can see.  Here’s what happened. 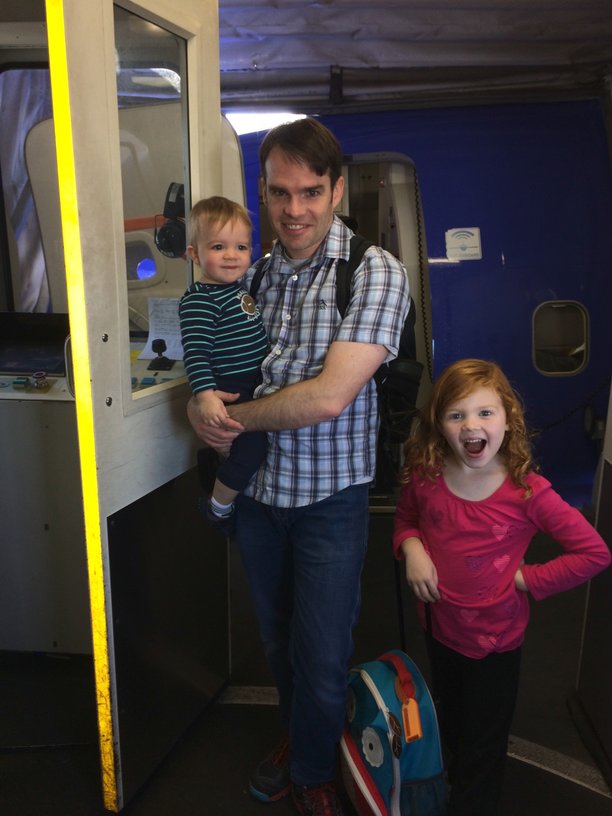 We flew to Raleigh for the long weekend with both kids to celebrate my grandmother’s 93rd birthday.  At the end of our trip, we began hearing news of a winter storm rolling into North Carolina.  Our flight was a 4:45 pm on Presidents Day from RDU to MDW, connecting back home to OAK.  The weather forecasts called for snow to start in the city some time between 5 and 7 pm.  We were cutting it close.  With it being a holiday and with weather developing, changing the booking for four people looked pretty much impossible.  Nevertheless, we took off early from my grandmother’s house for the airport in case there was an option for an earlier flight and simply to get ourselves off of the road before ice began to form.

When we arrived at RDU around 2:30 pm, all looked well.  Flights later in the evening had already been cancelled but our flight appeared to be in good shape.  After clearing security and waiting at the gate awhile, we then got the dreaded announcement that our flight would be delayed a bit – about 35 minutes.   We had a layover of 1 hour and 25 minutes, so there was still plenty of time.  Since we were connecting to the last flight of the night from MDW to any Bay Area airport, however, I was a little worried about further delays.

I asked the gate agent about that very possibility.  She assured me that the delay was only due to our plane coming in a bit late.  Things began to get suspicious, however, when our plane arrived, deplaned, and sat at the gate in plenty of time for us to make our original departure time.  A crew appeared at the gate wondering why they were locked out and why the delay had been posted for our flight. 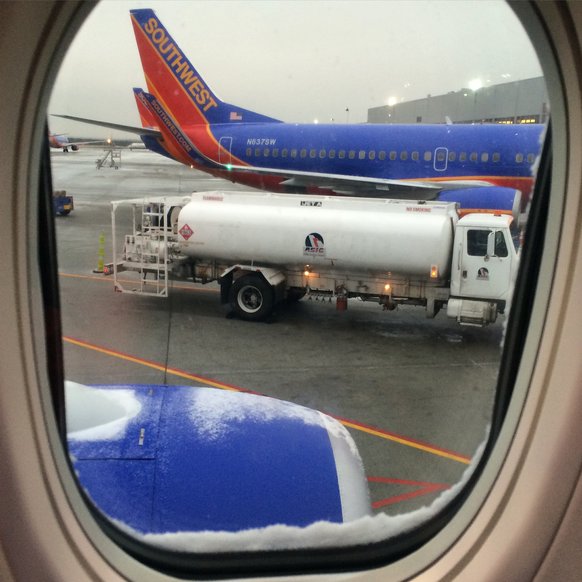 Snow begins to fall on our Southwest flight from RDU to MDW.

I, of course, sat as close as possible to the crew to eavesdrop a bit.  They soon discovered that there was a flight with 60 passengers coming in who were connecting to our plane and that the reason for the delay was to wait for them.  The gate agent either didn’t have (or wasn’t telling) the whole story to passengers.  As we waited, it began to snow.  At 20 minutes before our new (delayed) departure time, we still weren’t boarding, and I knew the 35 minute delay was not realistic.

After an additional wait, boarding finally started.  The 60 passengers from the connecting flight (from Orlando, as happened to be the case) ran on at the last minute.  Everyone was on board and were ready to go at about 1 hour and 15 minutes after our original departure time.  We were really cutting it close for our connection now, but we figured that we’d make up some time in the air and that Southwest would surely hold the last connecting flight for us (as well as several others making the same connection) for just a few minutes under the circumstances.

But then we sat.  And sat.  I noticed a gate agent walking the aisles and counting and re-counting.  I suspected there had been a miscount somewhere in the confusion of getting those connecting passengers on board.  Yet no one thought to make an announcement to find the missing passenger until 15 minutes had passed.  Turns out the missing person was already on board.  We were on our way.  But not until we lost 15 more minutes so the airplane could be de-iced (not that I’m questioning the necessity of de-icing).  We departed RDU 1 hour and 45 minutes after our original departure time.  I feared the worst for our connection.

Using the Southwest in-flight WiFi, I checked and rechecked our connection as we flew.  It posted a 5 minute delay.  Maybe they were waiting for us!  We landed right at the time our next flight was scheduled to take off.  Our hopes faded, however, when we found out we were arriving into Gate A17 when our connection was at B20.  It pretty much couldn’t have been farther.

My husband grabbed the baby and a few light bags and ran off the flight.  We thought he might have a chance to catch the gate agent at our connection and convince her to hold the flight.  My 5 year old daughter and I waited for the gate checked stroller.  It was a desperate and frustrating 3 minutes.  The stroller is never there when you are in a hurry.  Then we just ran.  We must have been a sight.

My 5 year old was a trooper.  She ran and ran, pulling her little owl suitcase behind her as she went.  She hardly complained a bit.  As a traveling parent, I was pretty darn proud.  But I was also exhausted and worried we would miss that connection. 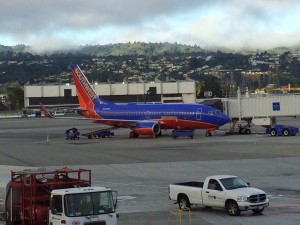 We arrived at gate B20 to find a gate agent waiting with the door open for us.  My husband had already boarded, and she knew we were coming.  She asked us our names and quickly tagged the stroller, smiling the whole time.  I thanked her profusely.

She told me to head for the back of the plane where there would be three seats together for us.  How could that be?  The flight was totally full and we were the last to board!

That dear, dear woman had the forethought not only to hold the flight for my family but also to check in advance to see who the late arriving passengers would be.  She could see that we were a family of four with a toddler and a 5 year old.  She knew we would miss family boarding and the chance to sit together.

Our seatmates later told us what the gate agent had done.  She had boarded the flight at the beginning and blocked off an entire row with a “reserved” sign to save three seats together for us.  That little kindness was something so minor for her to accomplish but it meant the world to us.  In an era where airlines regularly think nothing of separating toddlers and young children from their parents, she had done everything in her power to make sure that didn’t happen on her watch.

That is the kind of service that I’ve only experienced from Southwest in recent years.  Southwest employees, on the whole, are simply decent human beings who think about passengers as people.  It is part of the airline’s culture, and it really matters.  Despite all the challenges of that travel day, that gate agent just made me a little more loyal to Southwest.

And by the way, our bags made the connection too.  Thanks, Southwest. 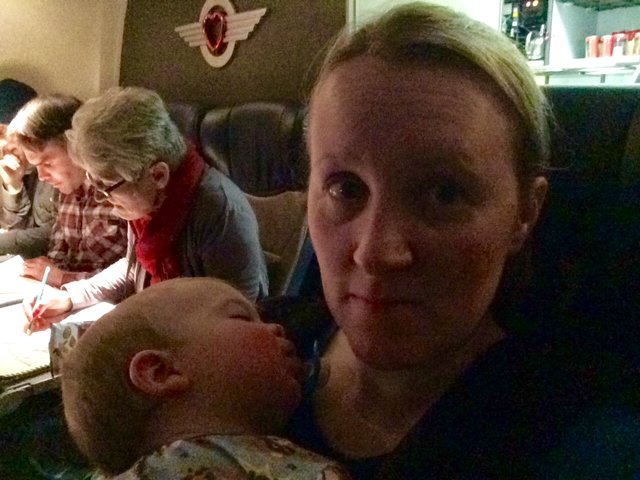 The bad travel day got even better when baby slept the whole return flight from MDW to OAK.

[…] of the times when an airline gets it RIGHT. Last year, I took to the blog to sing the praises of a Southwest Airlines gate agent going above and beyond. This time, Alaska Airlines is in the […]

A Winter Weather Travel Gamble that Paid Off (Plus Winter Air Travel Tips!) - Trips With Tykes

[…] to visit my grandmother and extended family for a family birthday weekend. Although we had a snow-filled trip on our last visit to North Carolina this same time last year, the weather for our travel days in and out of Raleigh looked to be clear so I was not worried this […]

[…] It’s a rite of passage when your traveling tyke is finally big enough for his or her own carry-on bag.  That time comes earlier than you might think!  Our daughter got her own bag at around 2 1/2.  Now, at almost 6 years old, it has come with us everywhere from Disneyland to Montreal to Hong Kong.  She even pulled it herself running at breakneck speed through Chicago Midway last month to make an impossible flight connection! […]

Wow.. What a great story.. I do this for people all of the time... Glad to see my other co hearts doing good justice

That is great to hear! Thanks for helping and going above and beyond!

What a great story (and gate agent)!