Thanks to the Oakland A’s for sponsoring this post. All opinions are my own.

Spring is finally here and that means it’s time for America’s favorite past-time – baseball! My family’s love of our hometown team, the Oakland Athletics – more affectionately known as the A’s – runs pretty deep. My husband grew up in the East Bay in the era of greats like Rickey Henderson and Dennis Eckersley, so he has been a fan for decades. Since we’ve been married, we have been season ticket holders and have taken our kids to dozens of games at various ages and stages. We are such fans that we even went to a game of the A’s Triple-A affiliated team, the Nashville Sounds, when we were in Nashville with our kids a few years back!

Our growing A’s loving family through the years.

This year in 2018 marks the 50th Anniversary of the team in Oakland. So when the Oakland A’s invited me to come to 2018 opening night to celebrate the anniversary and share all the family-friendly things there are to do at A’s games, saying yes was pretty much a no-brainer! If you are in the San Francisco Bay Area and looking for something to do from late March through September with kids, here is what you need to know about attending Oakland A’s games.

Why Should Families Go to an Oakland A’s Game? 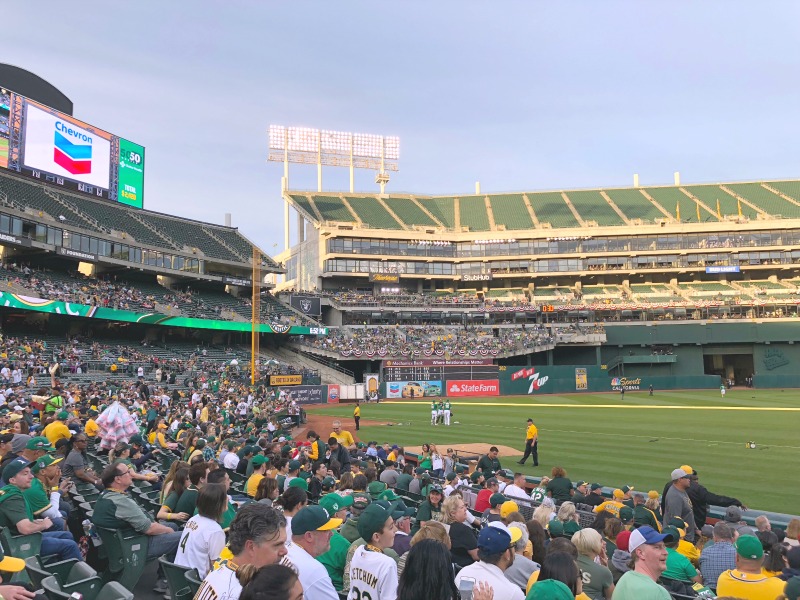 Oakland A’s baseball games top my list of the best things to do in Oakland with kids. I have always believed that the A’s offer up one of the best and most affordable baseball experiences in the country for families – locals and Bay Area visitors alike.

The 2018 50th anniversary season looks to be extra special, with some extra promotions and lots of celebrations of the greats. Opening night this year featured pre-game special appearances by so many fan-favorites- Rickey Henderson, Rollie Fingers, Mark Mulder, Tim Hudson, Barry Zito, Eric Byrnes, Scott Hatteberg, Eric Chavez, Coco Crisp, and many more. The celebration of the anniversary is only going to continue all season long. Look for “Green Fridays” where the team on the field will wear newly classic-colored kelly green jerseys as a tip of the hat to the past. 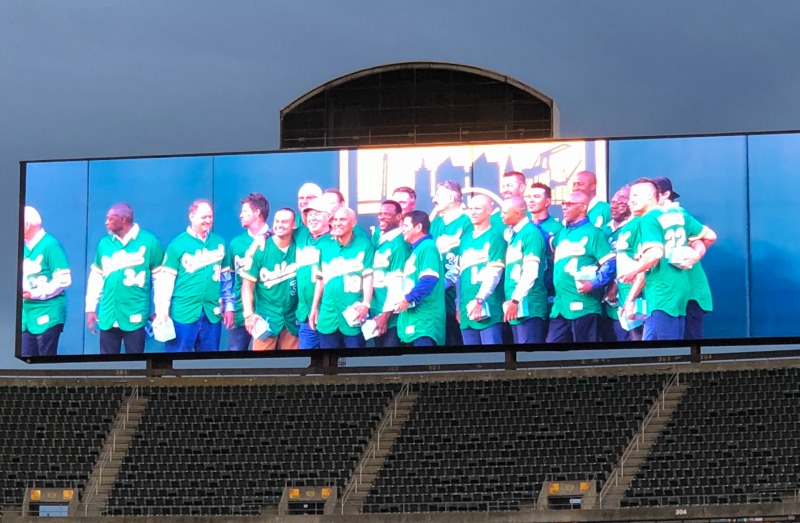 The A’s 50th Anniversary teams with many baseball greats!

If you have read Michael Lewis’s book Moneyball or seen its movie version starring Brad Pitt, you probably know a bit about the more recent history of this team. The Oakland A’s are famous for doing more with less. They don’t have the huge budget or the brand new stadium (yet – stay tuned) of some of the wealthier MLB franchises, but they make up for that in strategy and heart.

A’s players are young and excited to play the game. We have always found players and team staff to be so approachable and friendly with their young fans. The team also has a quirky sense of humor that comes across in their ads that makes them even more lovable. The fans at games replicate that wackiness to create a really fun-loving atmosphere in the stands. And of course, the A’s have a strong and deep tradition of community involvement that makes Oakland proud. 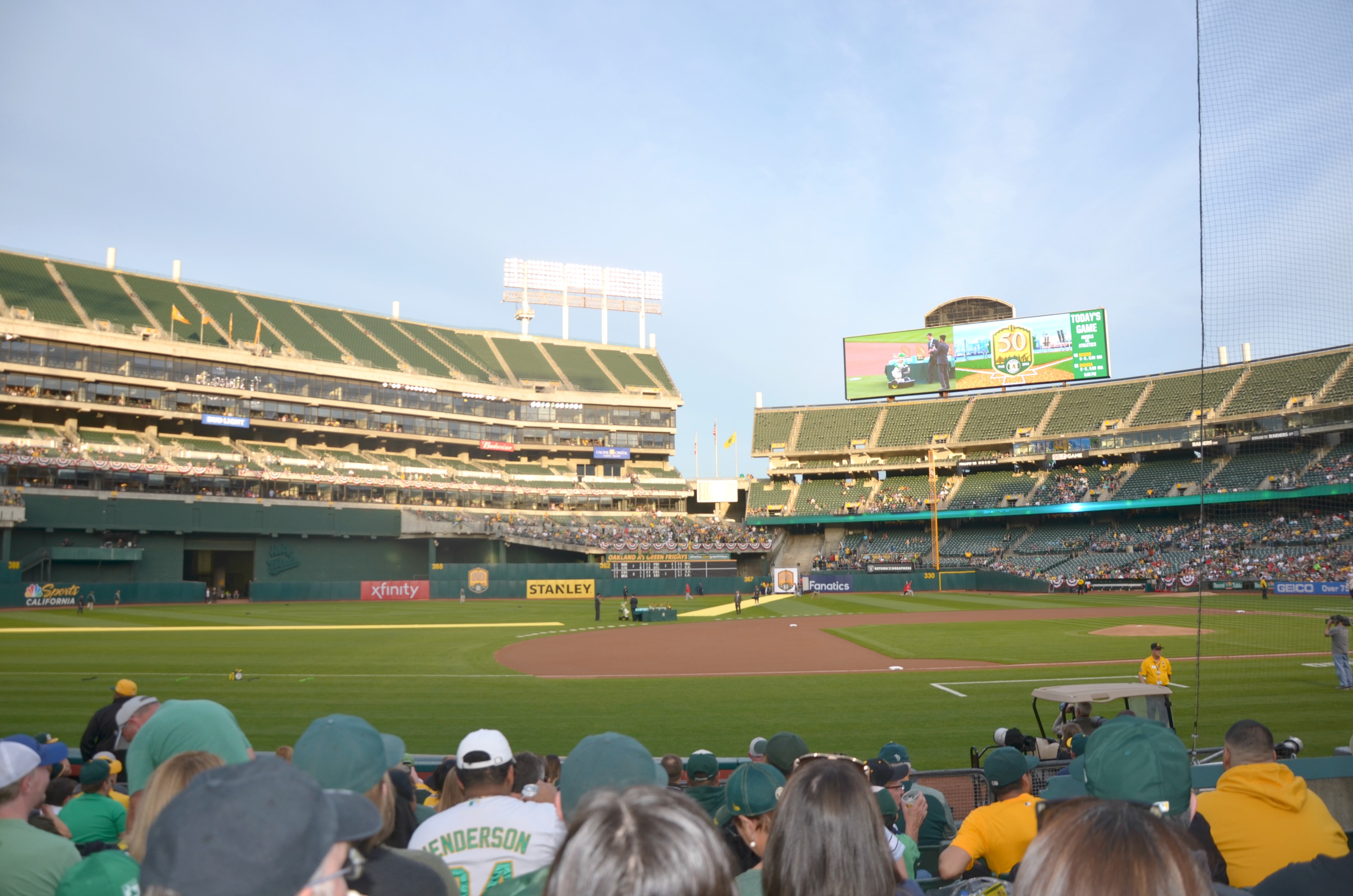 Most importantly for families, you can actually afford to take your kids to an A’s game. Or maybe even more than one! Single-game tickets for most games start at $15-20. Even many of the best seats are often within reach for families on a budget. There are always promotions throughout the season like Chevy Free Parking Tuesday, giveaways, and more. For the 50th anniversary game coming up on April 17, the A’s actually gave away FREE tickets to fans to celebrate the occasion. My family naturally jumped on that when it was announced and will be attending that game for sure! 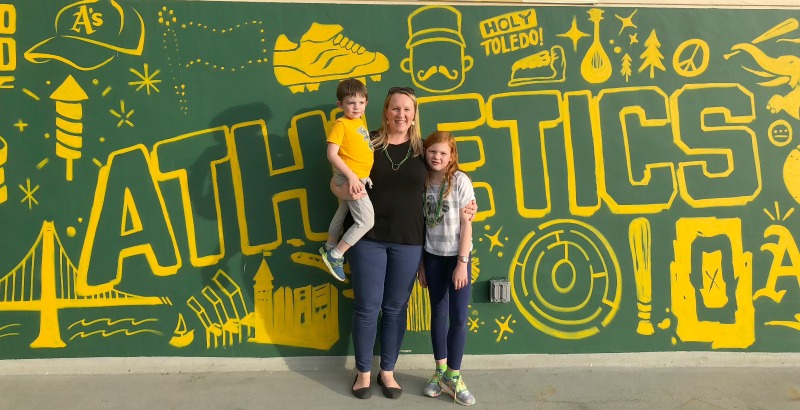 For 2018, the newest unique deal for reasonably-priced admission is Treehouse passes. The Treehouse is a brand new separate area in the outfield with indoor and outdoor bars, games like pool and foosball, and plenty of seats and standing areas to watch the game on a brand new redwood deck. It’s basically a sports bar like game-going experience. But it’s still very kid-friendly too! Fans can pay a monthly subscription fee of $29.99 per month for six months, or an annual fee of $149.99 to watch every single game from the Treehouse (note there’s no access to the rest of the stadium). It’s a pretty great value for fans who want to see a lot of games without breaking the bank. 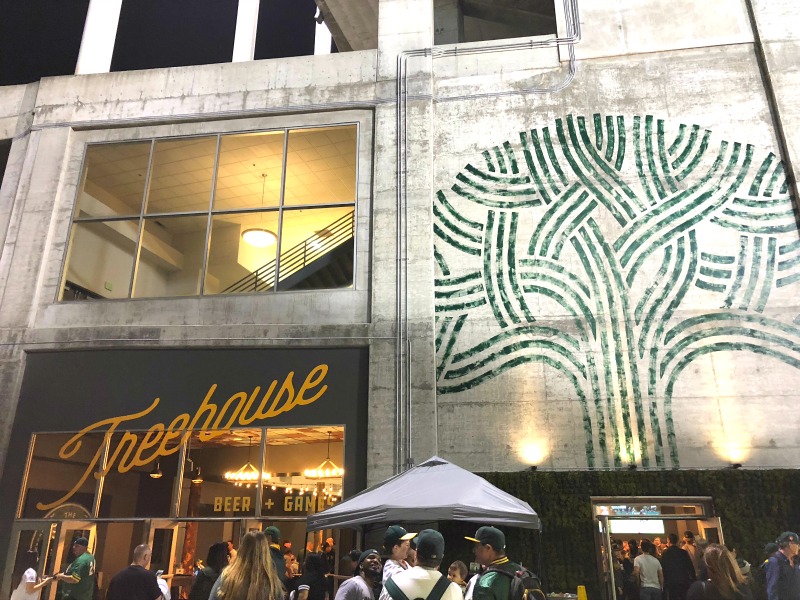 Entrance to the new Treehouse.

What To Do with Kids at Oakland A’s Games

So, if you are bringing your family to the game, what else can you not afford to miss? The team has spent millions of dollars the past two off-seasons to improve facilities at the Oakland Coliseum. There is probably a lot that is new if you haven’t been in awhile. We find that the games have a lot to entertain kids for hours long before the baseball even starts, so we always try to arrive early to do it all.

Here are the highlights for our family that other attendees with kids should check out too: 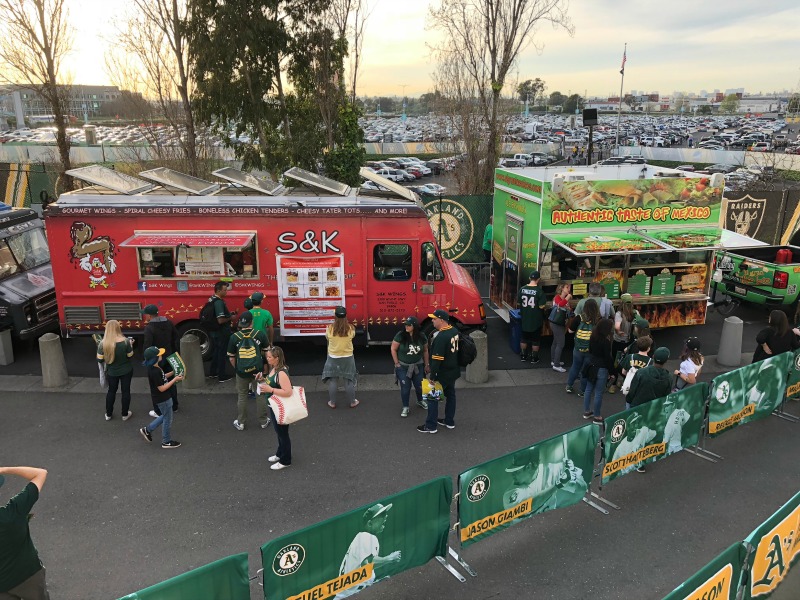 Some of the food trucks on Championship Plaza.

In between the Coliseum and Oracle Arena is an area in its second season this year called “Championship Plaza.” It features a variety of food trucks every home game of the season offering a wide range of unique food choices. What you may not know is that Championship Plaza is considered part of the ballpark and within the ticketed zone – once you enter the stadium, you can flow freely from the stadium in and out to this plaza area on the west side of the ballpark. No need to do this only before the game! 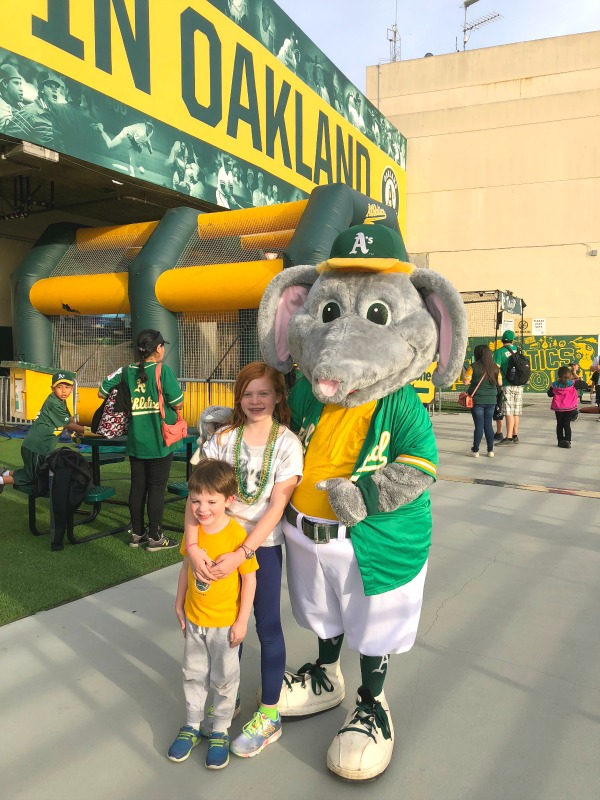 Photo opp with Stomper in the Fun Zone!

If you have kids, plan to arrive early so you have plenty of time to visit Stomper Fun Zone, the children’s play area. On the right as you enter is a smaller free play area the little ones will love. Local kid place space Twirl (from my hometown of Alameda!) has decked this play area out in A’s green and gold with a A’s locker, a tiny slide, a swing, and more. 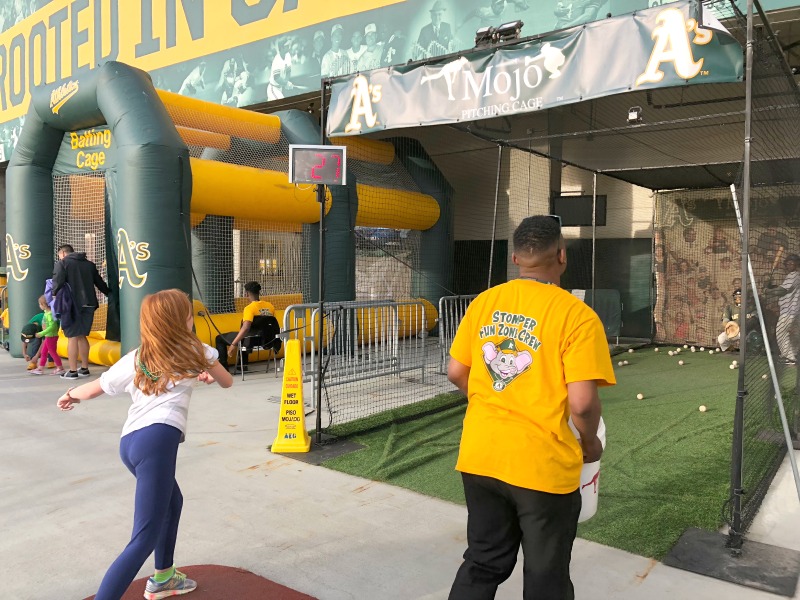 To the left around the corner is an area for the bigger kids. There is a batting cage and pitching practice areas. And don’t miss the new painted green and gold wall, worthy of some awesome Instagram-worthy family photos. Stomper himself – the A’s elephant mascot – often hangs out in this area of the Fun Zone during the pre-game hours, so be on the lookout for a great photo opp!

Formerly the Westside Club, Shibe Tavern is a new and improved food and beverage area in the Coliseum. There are plenty of tables – many with field views – so it’s an excellent place to have a sit-down casual meal if you aren’t a fan of juggling a hot dog and soda in the stands with kids likely to spill. Parents will love the over 50 beers on tap, many of them local. 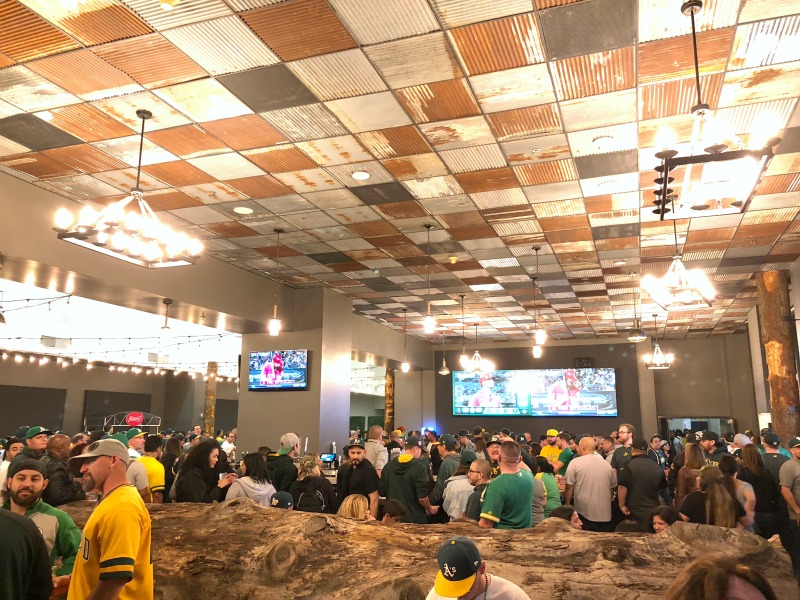 One of the bars inside the Treehouse.

Last but certainly not least is the brand-new Treehouse area. Even if you don’t choose the Treehouse only-ticket deal mentioned above, families should pay the Treehouse a visit. My daughter especially loved the sight of the foosball tables! Plus, the energy in the Treehouse was just electric. On “Green Fridays” a DJ will be spinning pre-game tunes from the Treehouse and a number of broadcasts happen from this vantage point if you want to see the TV crews in action. 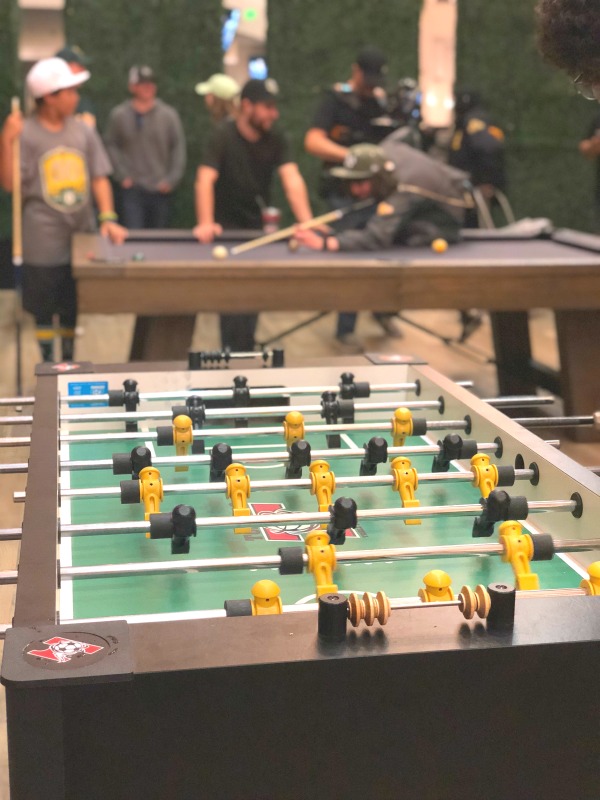 Foosball fun for kids and adults in the new Treehouse.

One important tip: just be sure to bring your regular game ticket to be able to leave the Treehouse and return to the rest of the stadium.

Have you been to an Oakland A’s game before? Are you planning a visit for the 2018 50th anniversary season? 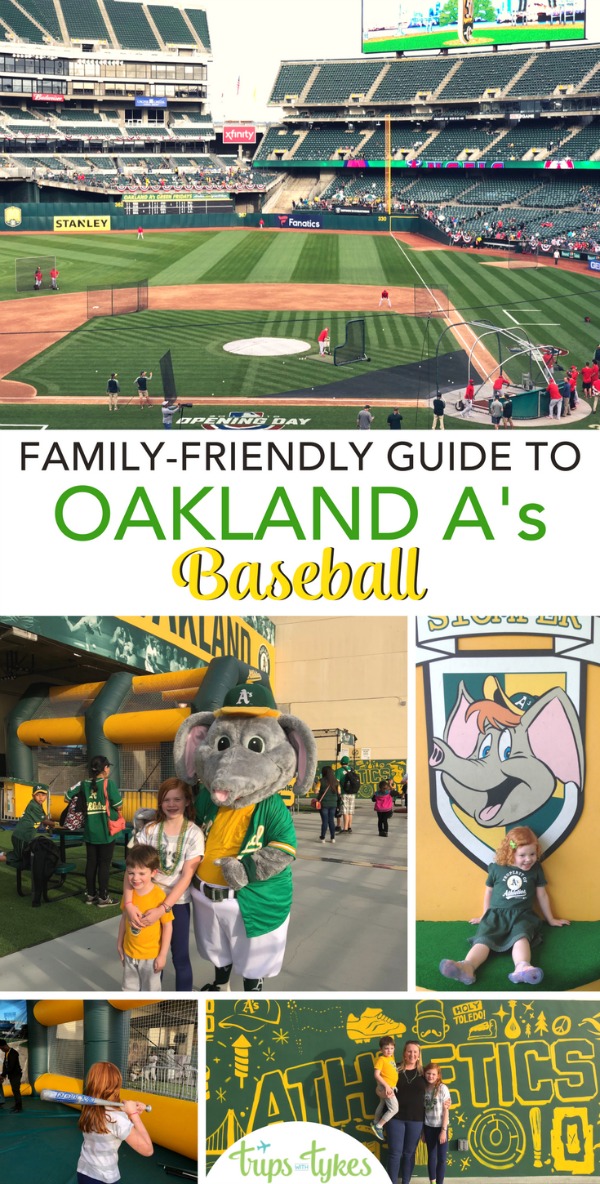 I love this! What a great write up and you have a beautiful family!