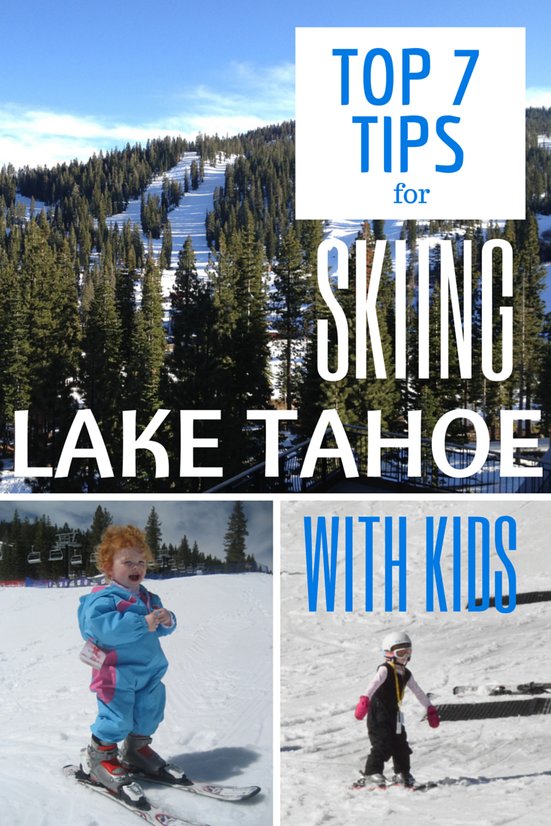 Much of my travel with my kids is by plane.  But when my family takes a road trip, one of our favorite destinations is Lake Tahoe.  Located just a few hours from our home in the San Francisco Bay Area, it is perfect for weekend getaway.  In winter, the skiing opportunities are endless.

My family has a lot of serious ski fanatics, so we’ve been hitting the Lake Tahoe slopes for many years before our little ones arrived.  Our ski trips have changed dramatically since then, to say the least.  Skiing with kids (and babies and toddlers!) is a challenging feat, but it can be done.  Here are our top 7 tips for skiing Lake Tahoe with kids:

We are partial to Northstar California because that is the resort that my husband grew up visiting.  It has great instructors for kids, lots of off-slope activities for non-skiers and kids too young to ski, and a family-friendly vibe.  Other Tahoe resorts definitely embrace the party hard mentality, and you may not want to be bothered by drunk college kids when you are with your tots.  Northstar and Palisades Tahoe (formerly known as Squaw Valley) are probably the most family friendly of the larger resorts, but they are also very expensive.  For a more budget option, try the smaller ski hills in the area (Tahoe Donner, Diamond Peak, etc.), especially as your child is just learning to ski on the bunny slopes.

Skiing involves lots of gear.  Carrying that gear is not fun.  Small kids cannot carry their own gear.  You will be carrying that gear for them.  With that in mind, pick a lodging location that is as close to the slopes as possible.  When we have hotel points to burn, we like to stay in the Ritz-Carlton slopeside at Northstar because the convenience just can’t be beat.

3) The drive may be most challenging part

Like many San Francisco Bay Area residents, we drive to Tahoe with our kids (the closest major airport in Reno isn’t that close to most of the resorts we frequent).  The drive from San Francisco is only about 3 1/2 hours to most Lake Tahoe destinations, but that does not account for potential traffic.  And traffic can be TERRIBLE the entire way, depending on the time of day and the weather conditions.

If you leave San Francisco at 3 pm on a snowy Friday afternoon, forget about it.  You’ll hit early San Francisco rush hour, then rush hour in Sacramento, and then weather as you get into the mountains.  As someone who has survived a 10 hour Tahoe car ride with a 10 month old, I don’t recommend it.  Watch the weather carefully and try to drive on off-times whenever possible.

For a weekend trip, leave the Bay Area before noon on a Friday, and also try to leave on Sundays for the return several hours before the slopes close or later in the evening after dinner when the traffic thins.  Even better – time your travels to coincide with naptime so you get a sleeping kiddo for most of the drive. 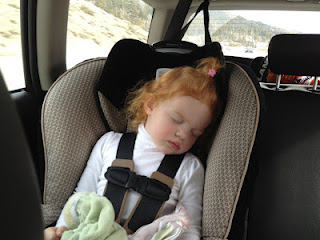 If you let your toddler ski, they may do this the entire drive home. Win!

4) Stop along the way

If you are lucky and plan the drive time right, you may be blessed with a sleeping infant or toddler for most of your drive.  But if your child is awake and fussing, there are a couple of great places to stop on the road between San Francisco and Tahoe to get a break.  Here are our favorites:

5) Your kids can ski earlier than you think

Most ski schools don’t start taking little ones until they are three years old and potty trained, but that doesn’t mean your child can’t ski before that.  Of course, you need to know your child’s personality and tolerance for adventure.  Our daughter is best described as “fierce,” so we took a chance and enrolled her in her first ski lesson at 22 months old.  Other parents on the slopes were giving us crazy looks, but the ski instructor was high-fiving us (she had started her own kids at 18 months!).  Our daughter did fine, and already has a love of skiing that has served her well in later ski season.  Of course, take it easy – one hour per day on the slopes for the toddlers is probably more than enough. 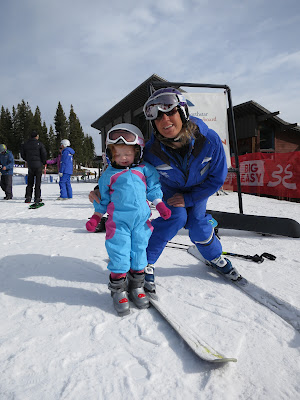 Watch Out – Two Year Old Skier on the Loose!

If you are bringing a young child who will not be in ski school with you, the biggest question is how can you get some time on the slopes yourself.  Some ski resorts offer a parent swap ski ticket that allows one parent to be with the child while the other skis.  Unlike regular tickets, it is transferable and you can trade off at any time.  Other ski resorts, including Northstar, offer child care for non skiers.  If all else fails, bring grandma along on your ski trip!

A lot of schools in the Bay Area close during the full week of President’s Day in February.  This has been dubbed “ski week,” because half of San Francisco piles in its cars and heads for Lake Tahoe.  If you have children who are younger than school age, you should absolutely avoid Tahoe during this time.  Prices are much more expensive and slopes are crowded.  The same goes for the Christmas and New Year’s holiday weeks.

Just a few months until ski season… so start planning!

When you Visit Lake Tahoe should you need a Nanny I am a Full time Professional Nanny who has been raised here since Childhood myself.

I have 12 years of experience, am Background Checked and Cpr Certified.

I am also a Certified Level 1 and Level 2 Ski Instructor and am Happy to accompany your Children both on and off the Slopes! : )

[…] is in full swing and the slopes are open!  If you are preparing to take your kids on a Lake Tahoe ski vacation, there are a lot of resorts to choose from.  Here is a guide to the major Tahoe ski resorts with […]

[…] blogged before about the best ways to survive a skiing road trip from the Bay Area to Lake Tahoe.  I was able to put my own tips to the test this past weekend, as my family just returned from a […]