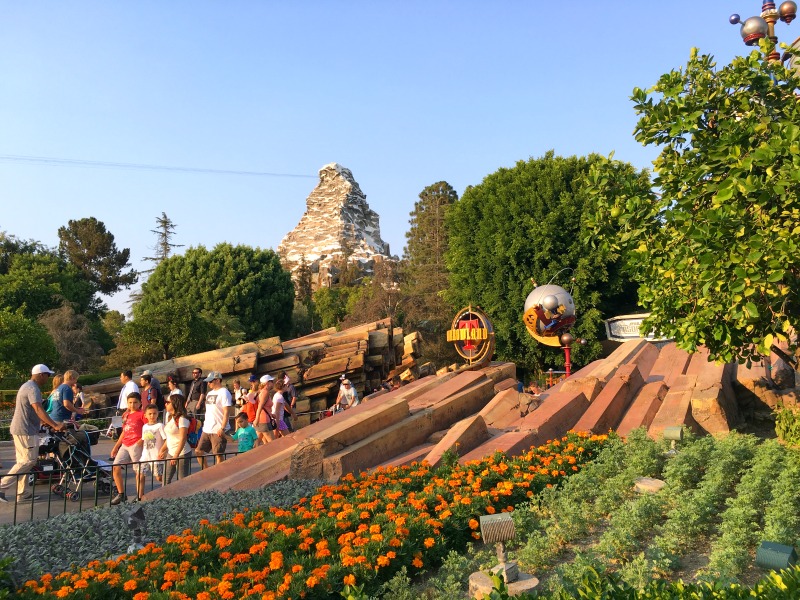 As much nostalgia and history as there is at the Happiest Place on Earth, the reality is that Disneyland is ever changing. On every trip, I discover something new or sometimes even an old favorite removed. Very big changes are underway at this very moment as Star Wars Land is under construction in Disneyland park. It is not slated to open until 2019, but we’ve already seen the impact it has had in 2016 and 2017 with the temporary closure of the Disneyland Railroad and the re-routing of the Rivers of America.

But 2019 is a long way off. And there are lots of changes and new offerings that will be happening in the next few months of 2017 at Disneyland, just in time for everyone’s spring break and summer vacations. No need to wait until 2019 to experience something new in Anaheim.

Here are a few new additions and expanded offerings at Disneyland to keep in mind as you do your Disneyland vacation planning this year!

Guardians of the Galaxy – Mission: BREAKOUT! 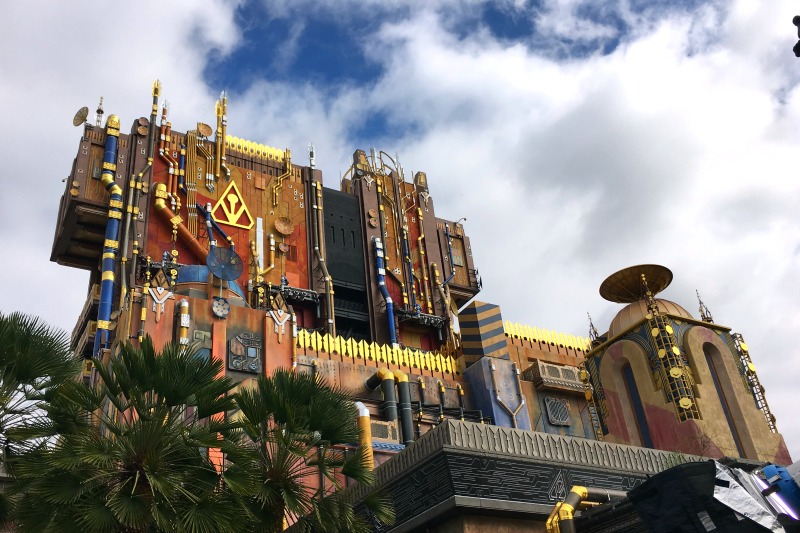 Tower of Terror had its final drop in Disneyland in January, but it returned with a new theme and decor on May 27, 2017. Reopened as Guardians of the Galaxy – Mission: BREAKOUT!, this is by far the biggest Disneyland news of 2017. Opening day lines topped 5 hours, and I expect lines to continue to be on the scope of Radiator Springs Racers from a few years ago. Let the race for the Fastpasses begin!

I attended the press preview for this attraction right before the grand opening and got a close look at the attraction and some strategies for dealing with the lines. Don’t miss my complete guide and sneak peek of Guardians of the Galaxy – Mission: BREAKOUT! with ride tips. 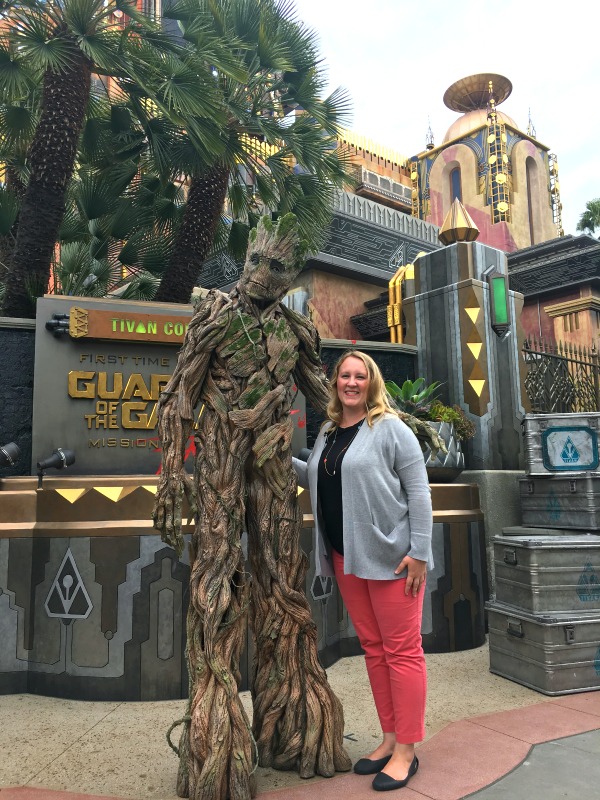 For superhero loving kiddos, California Adventure is the place to be this summer. In fact, Disney is has coined 2017 as the Summer of Heroes. Running from May 27 to September 10, Marvel characters will be taking over Disney California Adventure. Everyone from Groot to Captain America to Spider-Man will be making the rounds. Look for an Avengers Training (similar to Jedi training in Disneyland park) plus plenty of special event food and merchandise. 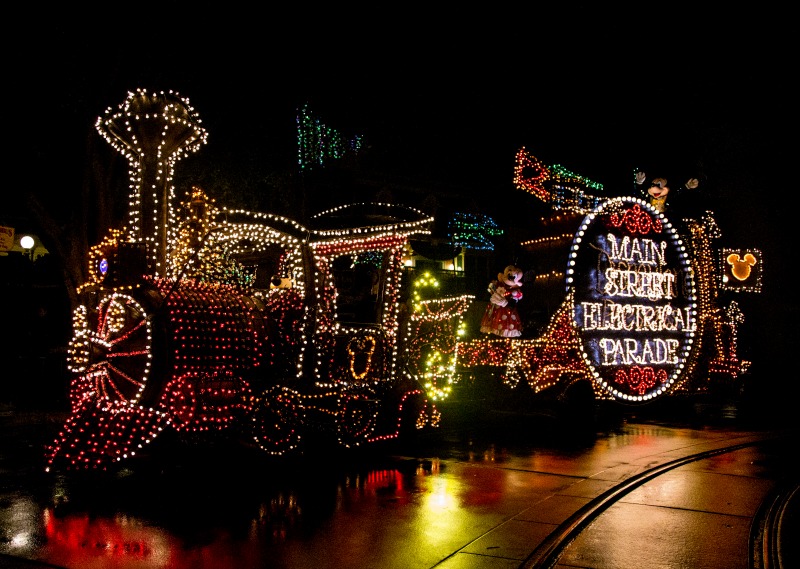 This classic parade has been one of Disney’s most beloved parades since its debut in 1972. But it has been calling Florida home for the past several years. It recently returned home to Anaheim for a limited run – which was recently extended through August 20, 2017 by popular demand. The locals can’t get enough of the nostalgia so crowds have been impressive. Prepare yourself if you want to get in a viewing before it’s gone. Disneyland recently began preventing guests from camping out for hours in advance of the parade so plan accordingly as well. 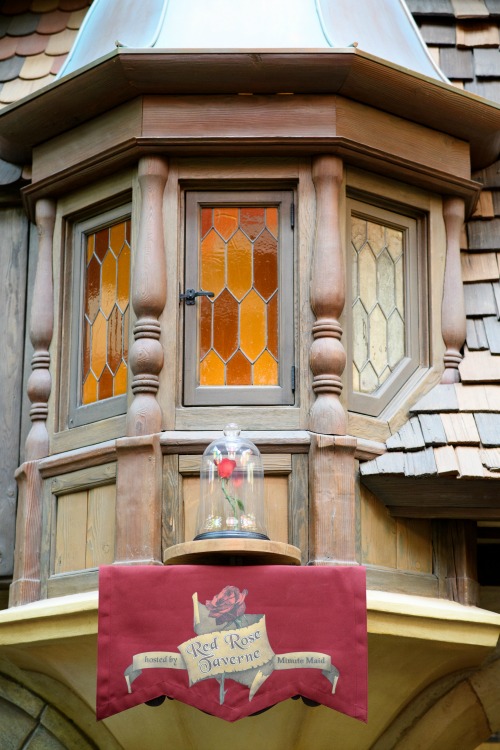 In case you’ve been hiding under a rock the last few months, Disney had a small, totally under the radar live action remake of one of its classic films this spring – LOL! The live action version of Beauty and the Beast debuted March 17, and Disneyland is still celebrating this movie hit in the parks too.

Village Haus Restaurant in Fantasyland has been transformed into Red Rose Taverne where you can try lots of food inspired by the movie. Look for movie inspired decor and lots of new food. Disneyland even has its own version of “the Grey Stuff,” and it’s supposedly different than the dessert of the same name at Be Our Guest restaurant in Walt Disney World. Belle and the Beast are also currently roaming Fantasyland unannounced so keep an eye out. 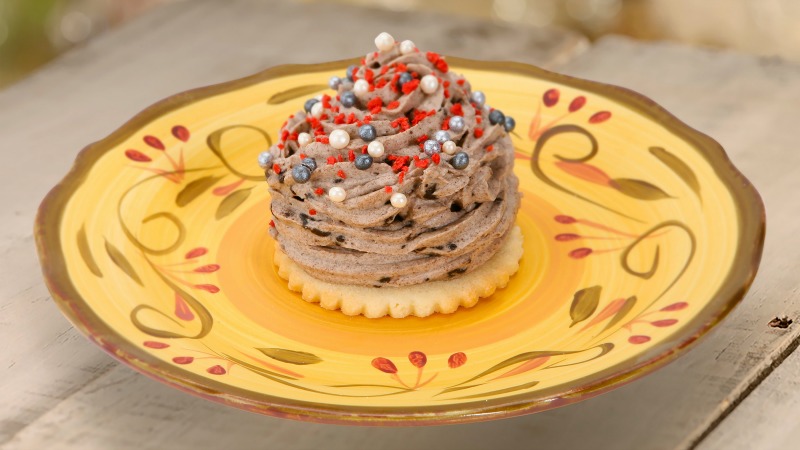 There has been no end date announced for the Beauty and the Beast added attractions, so delay seeing these at your own risk! 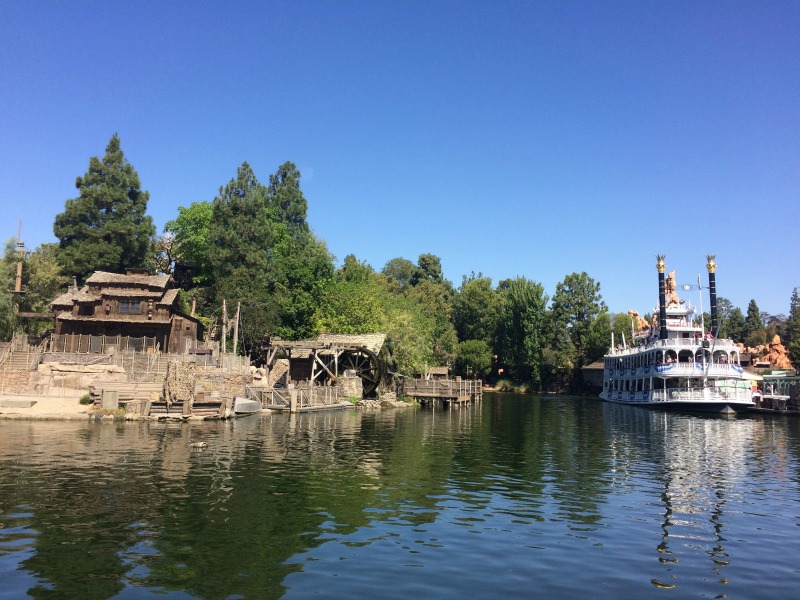 Even though Star Wars Land is still under construction, some of the areas that were closed during the construction process are going to be reopening much earlier. The Rivers of America are due to return to service sometime this summer – exact date TBD. And that also means the return of Disneyland’s evening show Fantasmic that takes place on the waterfront there.

Fantasmic promises to have made a few changes and updates to keep things fresh. Look for a Pirates themed addition to replace Peter Pan. The rumors are swirling as to other additions, but you’ll just have to wait and see for yourself in a few months. 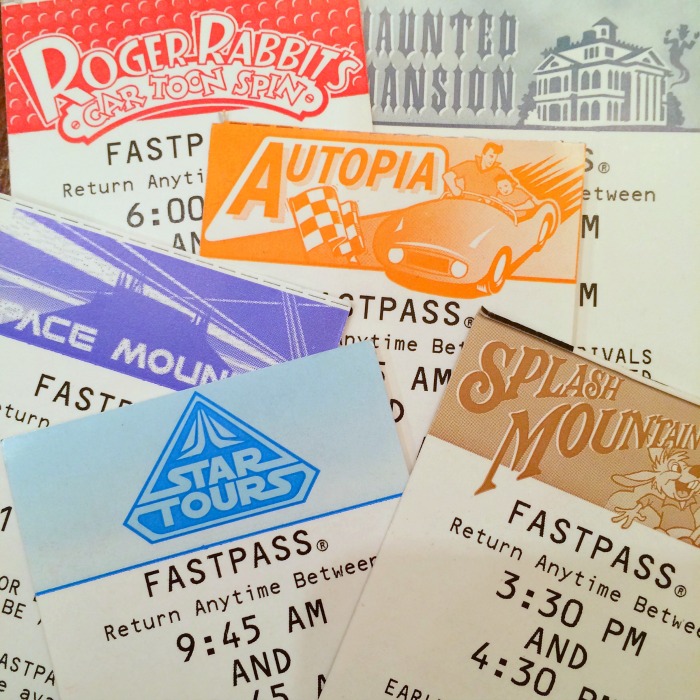 Paper Fastpasses still rule the day at Disneyland – but a big change is coming.

Last but certainly not least, a major change is coming to Fastpass at Disneyland some time later this year. No launch date has been announced, but Disneyland is going to be adding digital access to Fastpasses through a paid service called Maxpass. Maxpass will cost $10 per person per day and also includes access to all your Photopass photos. Paper Fastpasses will still be available too, but details on how the two systems will work all together are still unclear. (Get the full scoop on Disneyland Maxpass – published after the service finally launched in July 2017.) 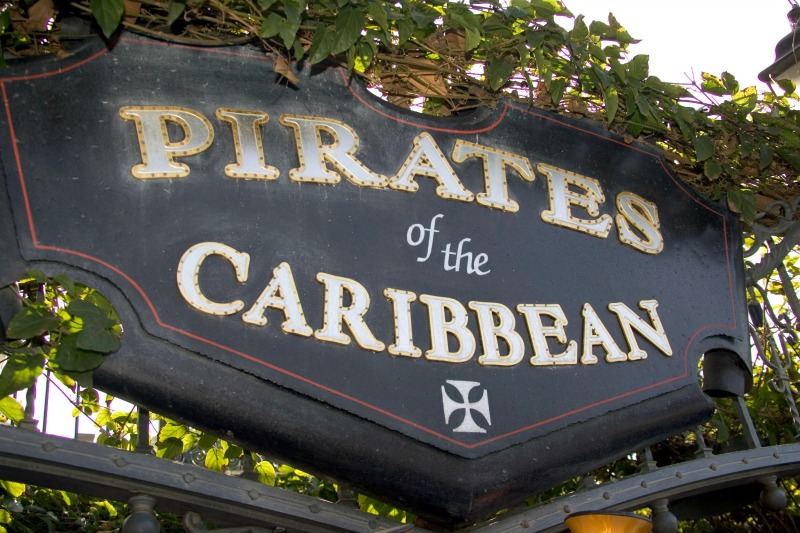 (Note: This event has ended. But look for Pirates themed photo opportunities in New Orleans Square as part of the movie premiere!)

My husband’s absolute favorite ride at Disneyland turns 50 in mid-March 2017. And it looks like Disneyland is going to celebrate Pirates in a big way for a few days at least. The festivities kick off on Thursday, March 16 with the real surprises in store on the anniversary itself on Saturday March 18. Look for pirate-themed food at French Market, the Mint Julep Bar, Harbour Galley, Royal Street Veranda, Cafe Orleans, and Blue Bayou. There will be lots of special entertainment and souvenirs for the pirate obsessed too. 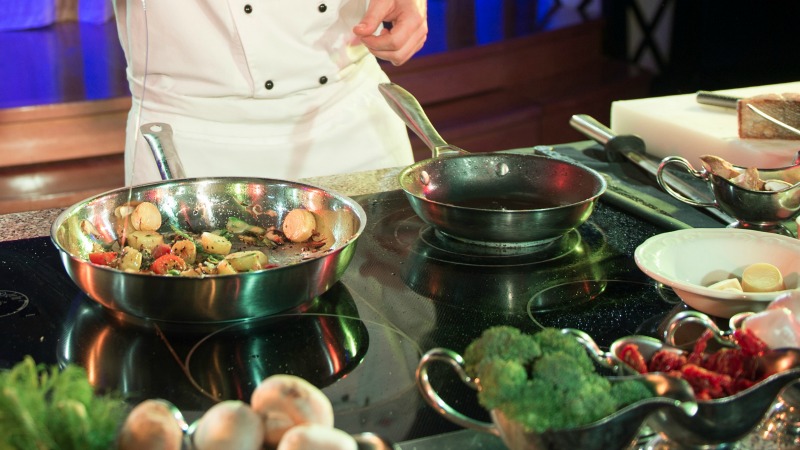 The Food & Wine Festival has been a staple event at Epcot for 22 years. It was only just added back to the event lineup in California last year after many years off. Frankly, it’s about time because no one does food and wine better than California!

Hosted in Disney California Adventure, the event this year features celebrity chef demonstrations, over a dozen marketplaces for food and drinks, and lots of surprises. Last year’s event was modest in size as it was re-introduced, but 2017’s event is a significant expansion. 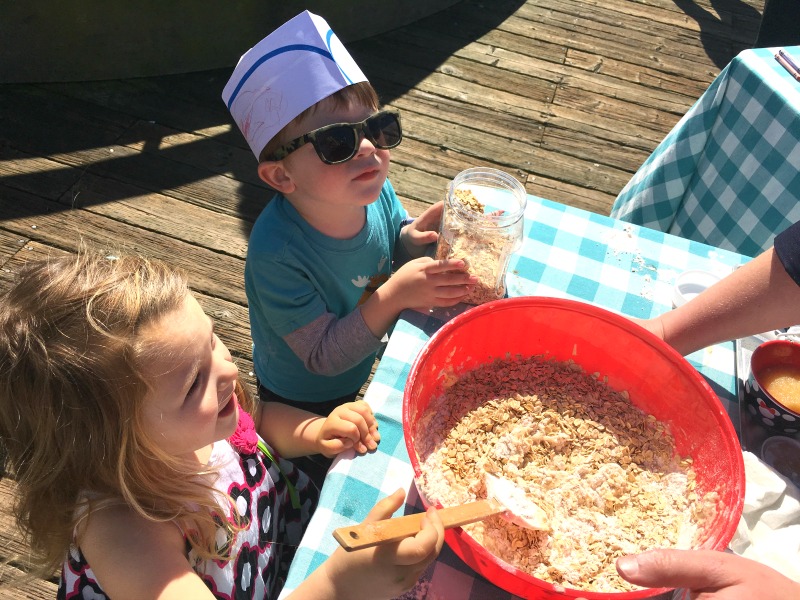 A highlight for families – the kid chef demonstration. My son and I got a sneak peek of this attraction when the Disneyland culinary team stopped by Oakland’s Jack London Square last week for a NorCal demonstration. I was worried my 3 year old would be too young to enjoy the experience, but with Mickey spatulas and measuring cups plus the promise of cookies at the end, he put Emeril himself to shame. 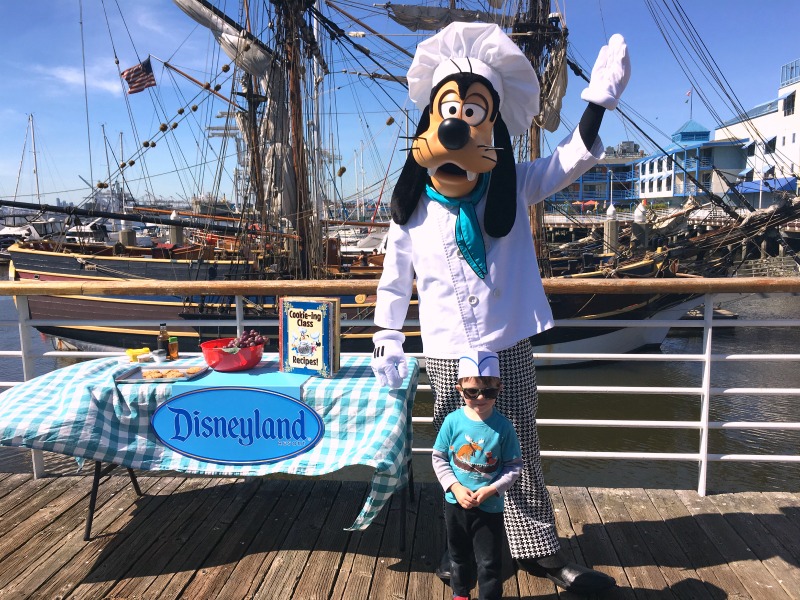 Chef in training with Chef Goofy.

Looking for guidance on what to do, see, and eat at the festival? Check out a few of these guides from my fellow Disney bloggers who know their stuff:

Are you visiting Disneyland this spring or summer? If you are planning a multi-day visit, you can save real money by booking your tickets or vacation packages through Trips With Tykes partner, Get Away Today. Use promo code TYKES10 for an extra $10 off all package stays of 2 nights or more. Get Away Today is the top seller of Disneyland vacations and offer tons of extra little perks to clients. 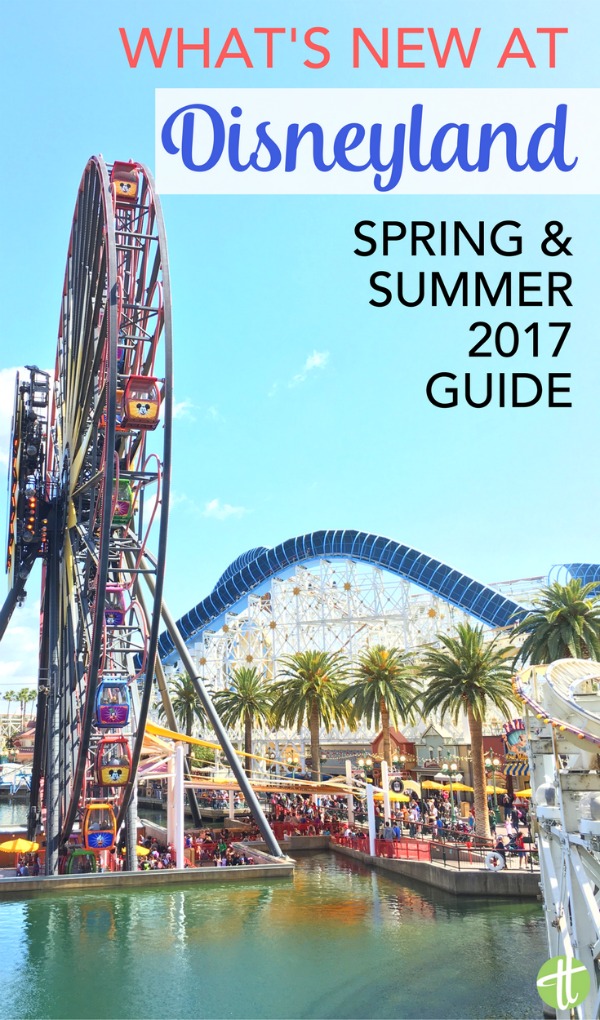 This was my first visit to Disneyland. Visited Disney World many times. I was very disapppointed with the cast members. At Disney World they bend over backwards to give you a magical experience. The cast members in Disneyland were typical amusement park employees. Did not hear any young children called princess when they dressed as a Disney princess. The park wasn't as clean.

[…] Curious about more than just the new Guardians of the Galaxy – Mission: BREAKOUT! ride? Disneyland is making this summer all about superheroes – not just the Guardians. Come back tomorrow for my complete guide to what Disneyland is calling the Summer of Heroes over in California Adventure. And in the meantime, don’t miss my overview of all the things that are new at Disneyland for summer 2017! […]

Hey! Found your blog while doing some research on a last minute trip we will be taking to Disneyland. We've never been to this park or to Disney World as a family-so it's all new to us! Curious how the fastpass and switch passes work for kids that are under 3 but likely tall enough to ride some of the rides.

Even if the kids are tall enough to ride you can still use rider switch if they aren't interested in the ride or are too scared. Rider switch is only offered on rides that have a height minimum so you can't use it on something like Dumbo or Peter Pan (not that you'd want to with a 3 year old who is going to want to ride those!). Here's my complete guides to maximizing rider switch and Fastpass at Disneyland: https://tripswithtykes.com/2015/01/30/maximizing-rider-switch-and-fastpass-at-disneyland/