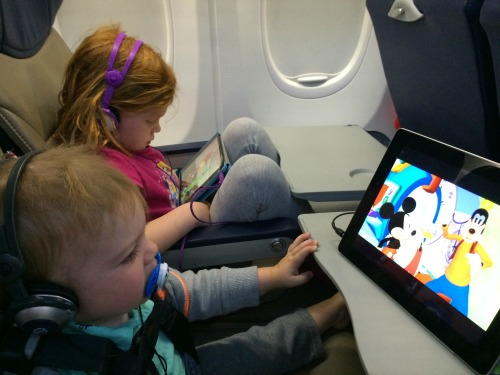 My secret to air travel with kids isn’t iPads. Although they do work some impressive miracles at times!

After flying more than 100 flights with my kids, everyone always asks me what my air travel secret is.   How do I survive and thrive in busy airports and in tight economy class airplane seats with a toddler and a kindergartner in tow?

First things first: it’s definitely not as easy as it looks.  Our family has our fair share of stressful moments and meltdowns like everyone else.  We’ve had trying times with extreme flight delays and cancellations, seat separation snafus, trips where everyone got sick, and vacations where bad weather derailed our best laid plans.

But I’m going to let you in on my little secret.  There is one rule we strive to follow that always works to make it all easier.

That’s it.  It’s the most important rule of air travel in my humble opinion, and it’s one rule that too many air travelers forget.

Air travel is immensely stressful these days.  Throw kids into the mix and it gets harder.  Gate agents and flight agents are used to dealing with irate passengers and all sorts of inappropriate behavior.  If you are the one person who is on your best behavior in stressful situations, not only will you and your kids be less stressed but you may also occasionally find the kindness returned to you in surprising ways.

I’ve had two flight delays in the past few weeks that served as powerful reminders of this lesson.  On my way to Orlando few weeks ago, my first flight had a mechanical issue that caused a major delay and made me miss my connection.  Desperate to make one of the next few flights that were all completely full, I was on my best travel behavior when seeking the gate agent’s assistance.  Guess what?  Confronted with a calm and kind passenger rather than one yelling at her, she went out of her way to find a way to move me from standby to confirmed on the next flight even though my chances looked pretty dim.  She even gave me a hug when she made it happen.  It was a warm and fuzzy air travel moment, to be sure! 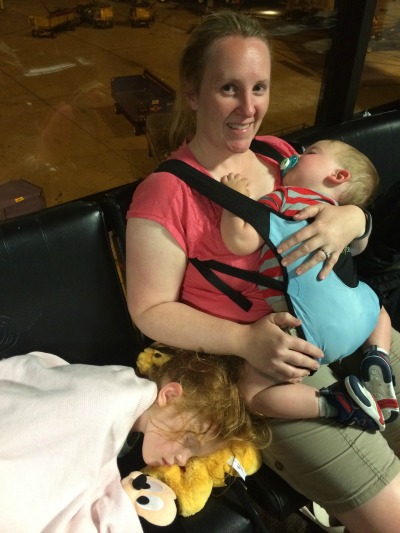 What we looked like on a late night flight delay. It’s not pretty, but at least I’m smiling!

The second reminder of the importance of kindness happened less than 48 hours ago when my entire family was connecting to the last flight of the night from Phoenix to Oakland.  We were already due to arrive at 11:45 pm PT with two cranky kids still on Eastern time, so an additional delay was especially painful.  We made the most of it all and kept our cool.  A thoughtful flight attendant sympathized as we boarded with two obviously tired kids.  She immediately arranged to give them coloring books and snacks.  The coloring book kept my 19 month old happy as boarding finished.  I tweeted my thanks and a photo to @SouthwestAir before we took off and found a reply the next day:

Late night coloring aboard @SouthwestAir. Thanks to the crew for being so sweet on a very late night delay! pic.twitter.com/HJvOomCc2G

@TripsWithTykes Thanks so much for your patience during the delay, Leslie. Pls DM your confirmation number so that we can followup. ^LN — Southwest Airlines (@SouthwestAir) May 11, 2015

I didn’t tweet to get any sort of compensation for the delay (delays are always a huge risk with the last flight of the night and I assumed the risk!), but I was surprised to find Southwest actually came through in a significant way.  The airline sent everyone in our family vouchers for maintaining a good attitude through it all.  This good example of why I love and am increasingly loyal to Southwest, but it was also a good reminder to me that sometimes it really does pay to be kind.  We, of course, teach our children to do the right thing even without promise of reward, but an occasional surprise reward isn’t a bad thing either!

I’m not saying I always abide by my own rule to be kind during air travel.  (In fact, my husband will tell you otherwise as I was ranting on the start of this last trip about a long TSA line that almost made us miss family boarding).  But when I do, I’m a happier person for it, Southwest voucher or not.  And my kids enjoy travel much more.

I hope I inspire all of you to think about practicing greater kindness on your next flight.  Help out a fellow passenger struggling with a bag, say thank you to a flight attendant who goes above and beyond, or  just chill out when faced with a flight delay.  Don’t be “that guy” yelling at a gate agent.  It isn’t good for your stress level and it doesn’t model good behavior for the little travelers you are raising either.  I can’t guarantee you an airline voucher every time you are kind and patient during tough air travel situations, but I can guarantee that we all might be able to fly the friendly skies once again if more people internalized this lesson.

[…] This. The number one most important thing to get through traveling with children- airport delays, sickness, sore ears, stress, tired kids, missed connections, all of it. And for that matter, life in general. One thing. […]