My husband and I just returned from our first flight with Baby #2, which was also our first trip with our entire family of four.  We took our 4 1/2 month old son and our almost 5 year old daughter to visit my grandmother in North Carolina to celebrate her 92nd birthday.  The trip turned into quite a family reunion on both sides of our family, as my sister, my cousin, and my husband’s cousin had also recently had babies and all of them lived nearby. 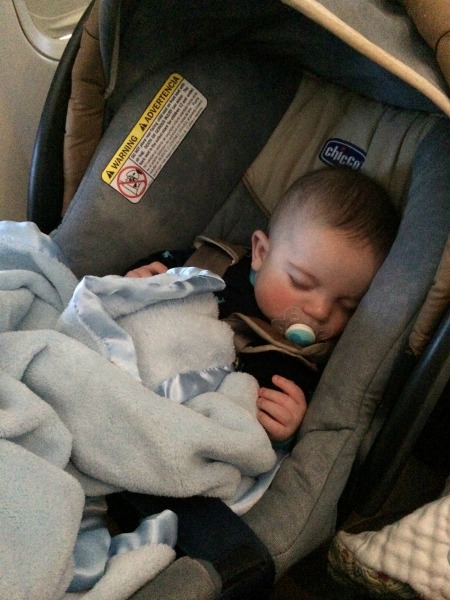 Baby #2 conked out on his first flight!

We flew Southwest from Oakland to Raleigh-Durham, connecting in Chicago-Midway in each direction.  Changing planes in Chicago in winter is always a risky endeavor, but we luckily managed to avoid the storm schedules — just barely!  We certainly didn’t want a repeat of our stranding in the Dallas Christmas snow storm of 2012.

While I’m a veteran of traveling with one child at every age and stage, the game has changed now that we’ve added a second child into our travel routine.  And I’m not too proud to admit that this veteran traveling mom learned a lot from traveling with two kids at once!  Here are a few lessons we learned that might be helpful to those of you making the transition to traveling with more than one child. 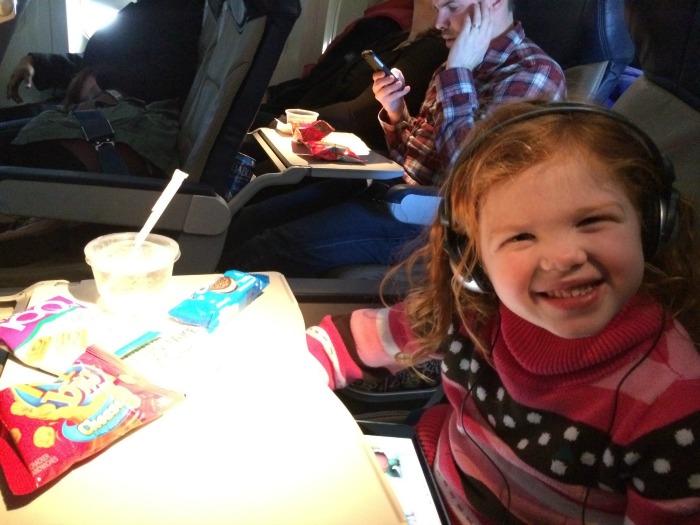 1) Cross-country travel with a lap child is really, really hard.

Since most of my family’s travel has been cross-country, we almost always purchased a seat for my daughter even when she was lap child age.  And the few times we took her as a lap child on shorter flights, we were able to snag an extra seat for her.  So we’ve never really been in the trenches with those of you who have braved long flights with a squirmy toddler on your lap.  But I now feel your pain!

While we were able to get an extra seat for Baby C on our two departing flights to NC, we were not as lucky on the return legs.  As a result, we held our son for the two hour flight from RDU to MDW and then again on the nearly 5 hour flight from MDW to OAK.  Luckily, he slept almost 100% of both flights, but our arms were beyond exhausted by the end of the ordeal.  The experience was made doubly hard by the fact that our daughter needed a helping hand from us on occasion, and having one adult’s hands totally tied up with a baby made things tricky.  One one of our flights, we sat across the aisle from a woman traveling alone with three kids under 5 years old — one of whom was a lap baby.  I frankly have no idea how she did it.

Lesson learned?  While I would not hesitate to book my son as a lap child on shorter flights in the future while he’s still in the pre-walking stage, I’m most likely going to pay for a seat for him on cross-country trips from now on.  And if I’m traveling alone with both kids, booking a seat for each one is a must.

2) Don’t expect an extra seat for your lap child on Sundays (or other high-traffic days like Fridays or holidays).

I know a lot of parents who travel by air hope to luck out and get a free extra seat for their lap children at the gate if a flight isn’t full.  We certainly have had some success in that endeavor ourselves.  Although you can’t expect flights to ever have empty seats these days, we learned that there are some rules to follow to improve your chances.

The most important rule is to travel on the lighter travel days.  Our departing flight to NC was on a Thursday, and we found ourselves quite lucky that day.  Both of our flights had open seats, so we were able to snag one extra seat for our son and bring his car seat aboard.  Our return flights, however, were on Sunday afternoon/evening, when many weekend travelers are getting back home to start the work week.  As a result, the flights were booked solid and there were no extra seats for families with lap children to use.

3) Don’t take the last flight of the night.

Our return flights included the last flight of the night from MDW to OAK.  When we landed in MDW, we found that it was already posting a delay of more than an hour even though the aircraft was at the gate.  We later found out that Southwest was holding the flight for other passengers arriving on connecting flights that were delayed, since it was the last flight of the night.

Although it is nice to know that an airline may hold a flight for you if you are running late, it is not fun to be on the other end of a delay when your own connecting flight was on schedule!  We ended up taking an hour and a half delay, meaning we arrived home in Oakland at 11:15 pm instead of 9:45 pm.  With the time change from the East Coast, that delay made us arrive home very late and with some very cranky kids.

Southwest is especially known to hold the last flight of the night in order to avoid paying to put passengers up in hotels, so book your travel accordingly!

4) Don’t stray from the gate area when you have little kids.

I know this one is obvious to veteran travelers, but even the best of us can slip up on occasion after many travels.  And boy did we slip up this time!

Before our last flight, we had about 50 minutes until our revised/delayed takeoff time when my husband and daughter went to grab a snack.  Suddenly and with no notice, the gate agent started boarding our flight at about 45 minutes out (Southwest usually boards about 30 minutes out).  I was sitting at the gate with the baby and all our carryon luggage, frantically trying to call my husband only to find that my  cell phone got absolutely NO service within the Midway airport.  I knew that if I didn’t board during family boarding, we would not be able to get seats together.  So I tried desperately to get the lap baby and all our bags on board by myself.  I was aided by a fellow passenger and, ultimately, a friendly flight attendant who took pity on me when she heard the tale.  Let’s just say it was an experience I will never, ever repeat.  I’m happy to say my husband and daughter made the flight, but they didn’t arrive back at the gate until C group boarding, which is too late to get seats together as a family. 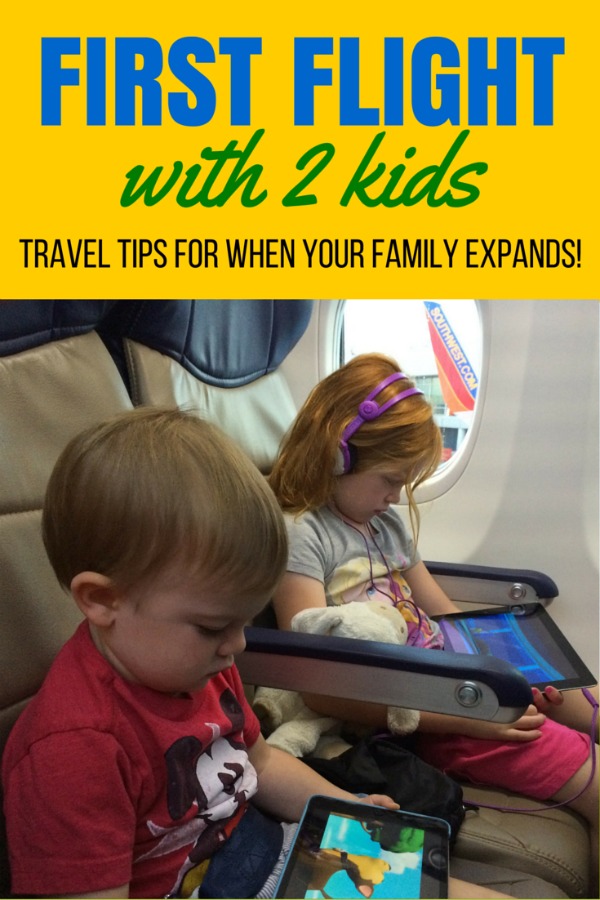 Great lessons learned! I know these tips will help many parents. I'll be sharing!

[…] us a much more comfortable flight, even when you consider that we will have to carry my son as a lap infant one more time.  And I’m always happy to avoid United and fly Air Canada […]

Oh wow, that brings back some memories! And I had forgotten about the no straying from the gate rule. On our last trip, Will went by himself to get lunch and accidentally took the boarding passes--about 2 minutes after he left, the plane started boarding. Two kids, one adult, all of the carryon bags and no boarding passes. I wasn't at all upset upon his return. #yeahright

Glad I'm not the only veteran traveler to screw this one up. Never again! ;-)

Whoops, sorry, that was Passports and Pushchairs, I posted under my other blog!

Aw, it is definitely not easy to travel with two, but you did it! Good job :) And I agree 1000% on the lap child. We did it a few times between the US and the UK and decided no more, the price of our ticket was worth our sanity!