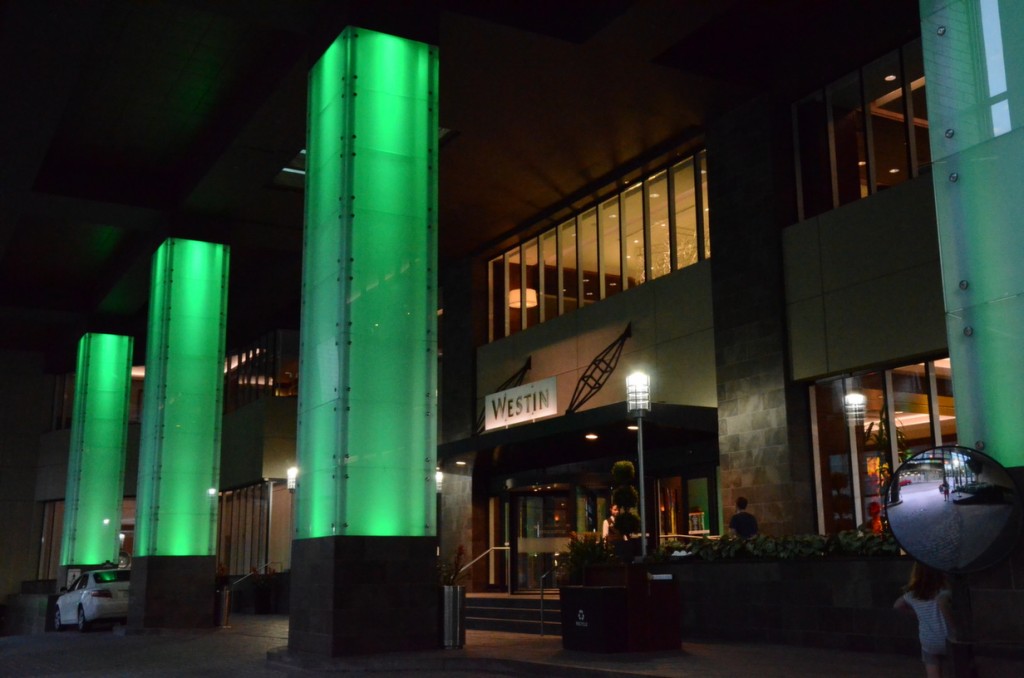 Montreal, Canada is a gorgeous city in the summer and an ideal destination for traveling with kids.  My family recently spent two nights in Montreal in late June 2014, where we stayed in the Le Westin Montreal Hotel.

Westin hotels are, of course, one of the Starwood brands of hotel and are usually fairly high-end.  Since my husband and I have amassed a decent bank of Starwood Preferred Guest (SPG) points and hotel rates in Montreal were pretty pricey, we snatched up a cash and points rate for our stay.

We chose Le Westin Montreal because of its central location in Old Montreal.  The hotel is within walking distance of several attractions (including Notre-Dame Basilica) as well as just a block from the Place d’Armes Metro station.  With kids, including our (then 9 month old) little guy who is still strongly wedded to his two nap per day schedule, we knew we needed to be able to pop in and out of our hotel.  After spending two nights there and traveling all over Montreal by subway and by foot, I can definitively say that the location could not have been better for family travelers. 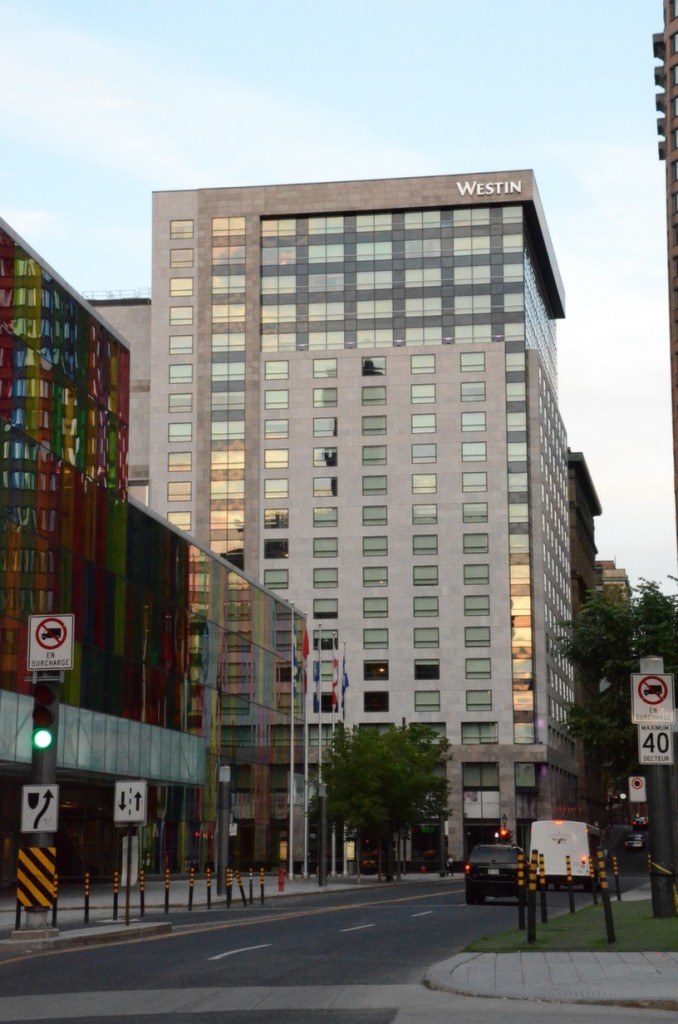 The check-in process was seamless.  The front desk clerks (all of whom happened to be youngish women at the moment we checked in) could not have been sweeter to our children.  They made a grand show of presenting each child with a Westin Kids Pack gift bag, which was a highlight for our daughter.  Inside we found a Westin-branded nightlight, outlet covers, a cute rubber ducky.  As our son was growing increasingly mobile with each passing day on this trip, we were happy to have some childproofing supplies. 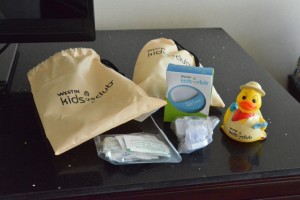 We were given a room on a high floor which had a nice view of the city of Montreal.  The room itself was quite spacious.  We had two queen beds, a desk, dresser with TV, and two small chairs with a small coffee table.  Even with all this furniture, we still had plenty of space for a rollaway crib to fit in a corner of the room for the baby. 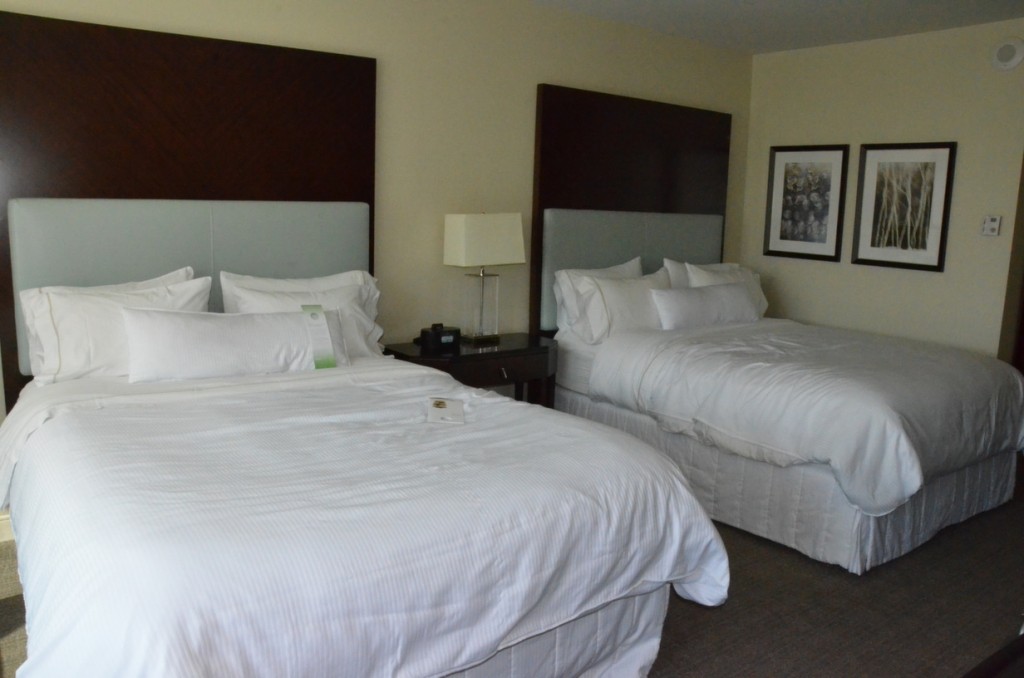 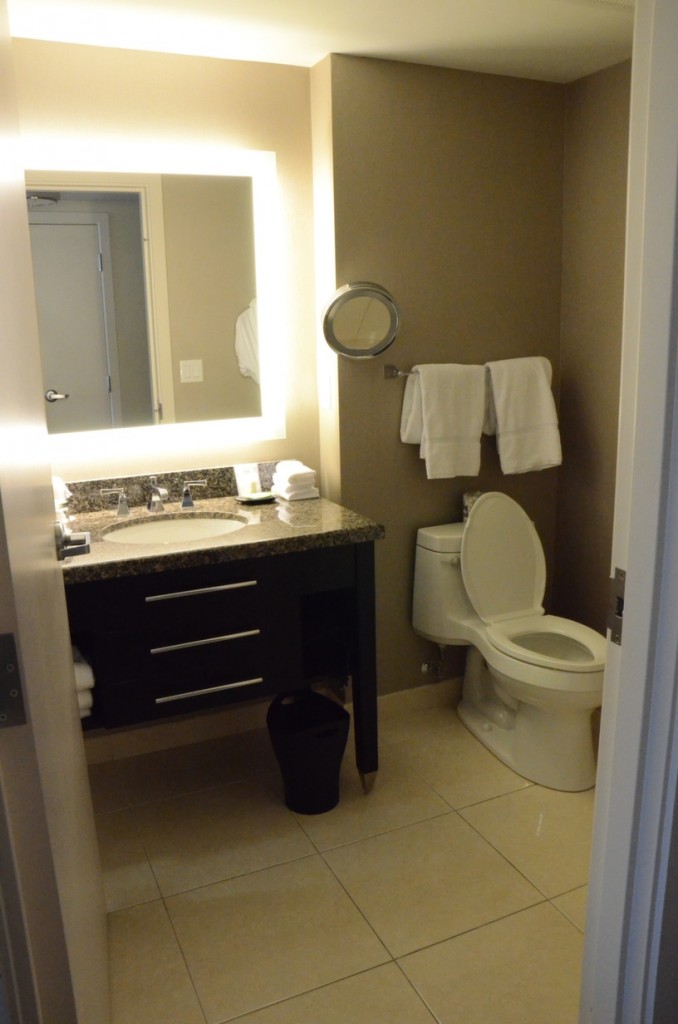 Speaking of cribs, we were very happy that the hotel had no problem providing us with one (we made the crib request with our reservation).  Some hotels have a very limited supply and cannot always make them available.  The crib was a standard issue hotel rolling model with white metal bars.  Our son, who is used to crib bumpers at home, kept bumping his head on the bars and dropping his pacifier out of the sides.  We inquired of the front desk whether they had bumpers available too (a stretch – I know!), but no such luck.  So it wasn’t a perfect sleep experience, but our son adjusted quite nicely the second day. 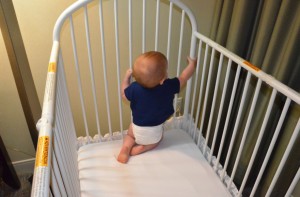 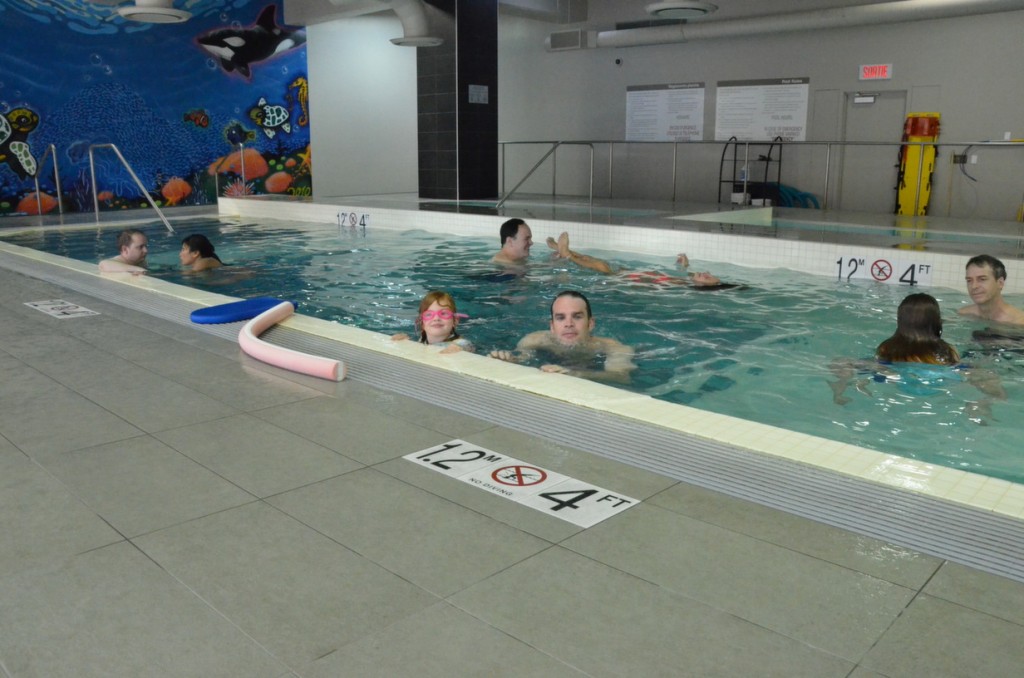 The pool was undoubtedly a trip highlight (and also a low-light for reasons that will become apparent).  Kids will absolutely love that the pool has a glass bottom that opens to the hotel entrance below.  Adults, of course, might be a little wary of being so on display for arriving hotel guests and valet staff below!  The pool was staffed at all times with a clerk who provided towels and monitored the pool for any unreasonable behavior.

Our only major critique of the pool was its hours.  It stays light in Montreal quite late during the summer, so the city stays active well into the late evening.  After dinner on our last night, we wanted to take one more dip with our kids in the pool.  We arrived about 8:50 pm (our kids still mostly on California time so it wasn’t that late for us), only to learn that the pool was to close at 9 pm.  This was a big disappointment, as most hotels usually don’t close pools until 10 or 11 pm.  The hotel should seriously consider longer hours, especially in summer.

Next to the pool was an impressively large gym facility, with both cardio equipment and strength training machines.  We got all of our exercise walking all over Montreal (usually with a 20 pound baby strapped to one of us in a carrier!), so we didn’t make time for a workout. 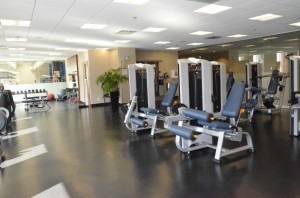 We ate at Le Westin Montreal’s restaurant (Gazette) only once, for breakfast on our first day.  The restaurant offered both a buffet (with hot and cold choices) as well as a made-to-order breakfast menu.  The food was quite tasty and we frankly found that it was not that expensive for a hotel restaurant.  Most of the hot breakfast entrees were around $15 CAD.

Other than the short pool hours, there was very little to find fault with at Le Westin Montreal.  Our only other problem happened as we were checking out for a very painfully early flight.  We had called the night before to make sure a bellhop would come to our room to help with bags at a specific time (so we could let the kids sleep as long as possible and dash out the door).  We had to call again the next morning, however, when no one arrived in time.  We also asked for our car to be brought around by the valet, but encountered problems there as well.  We luckily had built about 15 extra minutes into our schedule for just this kind of contingency, but the problems caused a bit of unnecessary travel stress with cranky kids.

Despite these few minor issues, we’d definitely stay at this hotel again.  In fact, our daughter is still talking about our stay 2 months later.  She felt like she got to stay in a bit of a “fancy” place.  My husband and I thought the hotel balanced elegance quite nicely with a truly family-friendly atmosphere… kind of like Montreal generally! 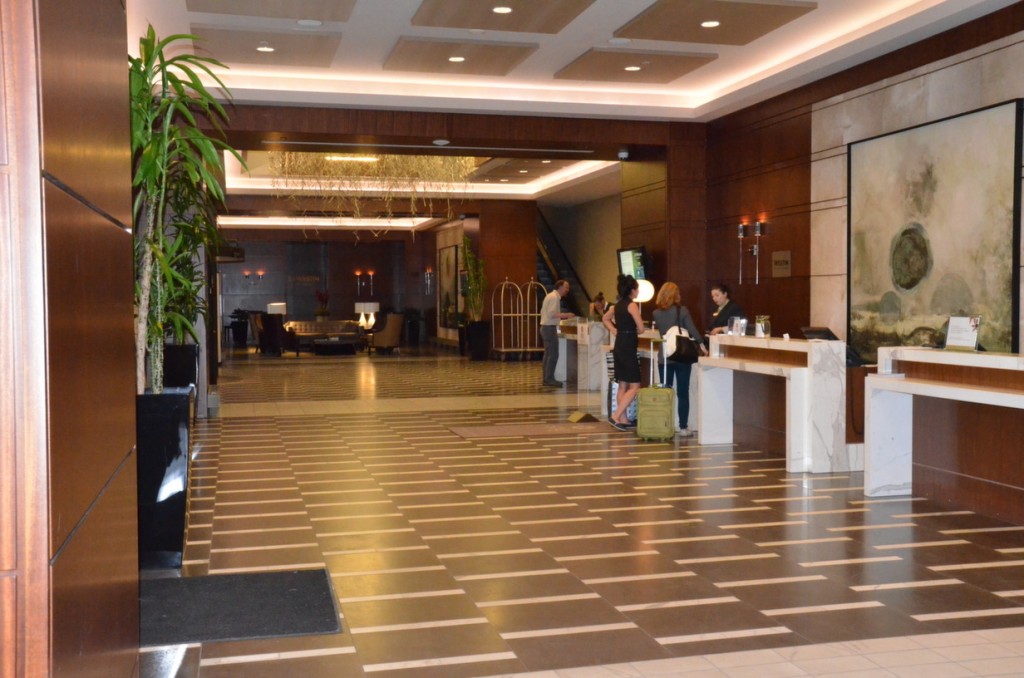 Travel Highlights from 2014 - Trips With Tykes

[…] with Baby C, got passports for the kiddos and hit two international destinations (Hong Kong and Montreal), and even visited Disneyland twice in one […]

This is a great review! We love Starwood hotels and stay in Westins often (SPG points rock!). I hope we can take a trip like this some day!