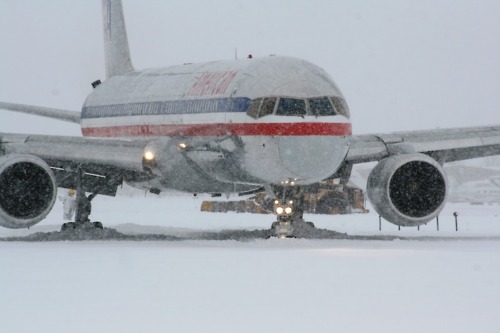 If you traveled at all over the holidays, you probably were well-acquainted with the travel nightmares that winter storms caused across the South and Eastern seaboard.  The mess started on Christmas Day, with snow and ice hitting Texas and completely disabling AA’s biggest hub at Dallas/Ft. Worth.

I was in my hometown in Alabama on Christmas Day and the crazy weather then came for us later in the day as the storm moved on.  We had lots of tornadoes in our area by the evening.  We even spent an hour in the closet when our county sirens went off with a tornado warning!  It was my daughter’s first tornado and she got a kick out of hiding in the closet, so that was an adventure.  Luckily, it wasn’t cold enough to snow or ice over in Alabama, as was the case in Dallas, and we also avoided any tornado damage in our area.

By the next morning on December 26, skies were clear in Alabama as the storm went on to cause trouble for those further up the Eastern seaboard.  We had a flight out of Birmingham at 6 pm on December 26, and we hoped that we would have an easy travel day flying from BHM to DFW and then connecting onward to SFO.  Before we left Montgomery to make the two hour drive to Birmingham, I carefully checked the flight status for my flights knowing that DFW would be having residual delays from the mess the day before.  American’s app and website indicated that everything was on time for both of my flights.

Crisis averted?  Hardly.  The very moment that we were exiting the highway to pull into the Birmingham airport, the text messages started flying.  Our AA flight from BHM to DFW was delayed an hour and 15 minutes.  Worrisome, but we had a 1 hour 40 minute layover in DFW and we though we could make it.  When we checked in at the ticket counter, however, the agent indicated that the delay was going to be 2 hours, but that everything in DFW was delayed.  In all likelihood, our connection from DFW to SFO would be late too, and we could still make it even with a 2 hour delay.  The flight to SFO was the last flight of the night for that route, and airlines are known to hold those flights a bit if it allows a lot of passengers to make the connection.  We settled in with our little one at the gate area for a long wait full of iPad games, airport food, and Christmas candy to pass the time.

I kept watching AA’s website and app for our flights.  Little known fact — the AA website (but not the app) allows you to see where your aircraft is coming from and what its status is so you can know if the delay times the airline is feeding you for your flight are a bunch of bull.  True to form, they were!  The whole time we were sitting at the gate for nearly two hours, AA continued to post only an hour and 15 minute delay on our flight.  But I could see that our inbound aircraft had not yet left the ground in DFW to make the trip to BHM to pick us up, so that one hour 15 minute delay was just dead wrong.  As soon as I knew we were facing much more than even a 2 hour delay, I called American.  Phone lines were completely jammed and I could not get through for awhile.  Everyone at our gate was starting to get restless, as there was no American agent in sight anywhere in the airport to help us out.  A few other experienced travelers knew that we were in for a very long delay and a lot of missed connections, and we started talking and sharing strategies and news.

After many tries, I finally got through on the phone to AA.  I got an amazing agent who was sympathetic, humorous, and willing to stay on the line with me to try to find alternatives to get us home.  Even though I’m not an AA frequent flyer, she could tell that I generally knew my stuff when it came to air travel and that, along with my decision to simply be nice to her unlike everyone else she had talked to all day, went a long way to a pleasant call.  We discussed a myriad of solutions (including rerouting on various other airlines and into other Bay Area airports) that I won’t bore you with here, but we ultimately decided not to change the booking because there was a good chance our connecting flight (the last flight of the day to SFO, by the way) would have enough of a delay that we might still make it out.  In addition, all flights from DFW to SFO for the following day were complete booked, so she couldn’t get me confirmed seats as a backup option on one of those either.

We finally managed to leave BHM right at three hours late, and our SFO flight at that time was showing only a 45 minute delay.  So at the time of takeoff, it was looking likely that we would be spending the night in DFW.  When we landed at 10:55 pm, I turned on my phone to find that the SFO flight was still at the gate and scheduled to depart at 11:00 pm.  There was a chance we could still make it!  As we pulled into the gate at 11:02, our hopes fell — the AA app posted that the SFO flight had departed.  There were about 10 of us on the flight who were going to SFO and everyone was wondering why they couldn’t have held it, but in all likelihood, the SFO flight was probably full of passengers who had been stranded earlier in the day.

After deplaning, my husband ran through DFW trying to find an agent who had a short line while I carried our very grumpy daughter and most of our carryon luggage.  My husband found an agent who immediately sent us running back in the other direction to try to catch the last flight of the night to LA.  When we arrived, it had already departed, so we knew we were stranded.  My husband again found a short line and began working with an agent on alternatives.  All flights to SFO were booked the next day, and with three of us, we knew it was unlikely that we could be accommodated all together as standby passengers on those flights.  With a little luck and lots of prompting from my husband, the agent found three seats on a 10:30 am flight from DFW to San Jose the next day.  We confirmed that a family member could pick us up in San Jose (just an hour’s drive south of San Francisco) and thanked our lucky stars!  We were sent off to an airport Marriott with a hotel voucher and a few meal vouchers, breathing a sigh of relief that we would be able to get home the next day.

The next day was fairly uneventful.  We had a grumpy kid with a cold and an additional delay of nearly an hour on our San Jose flight, but we made it back to the Bay Area in one piece.  This flight officially sets a new travel delay record for us with our little one (beating our Hawaii delay from this summer), with a grand total of 28 hours in transit.

Some takeaway lessons from our adventure:

I Flew Frontier Airlines... And It Was Just Fine - Trips With Tykes

[…] to be fair, I’ve personally experienced horror stories on many legacy airlines too (being stranded in Dallas by American at Christmas time a few years ago comes to mind). Stuff goes wrong in modern air travel no matter who you fly. Many […]

A Winter Weather Travel Gamble that Paid Off (Plus Winter Air Travel Tips!) - Trips With Tykes

[…] doesn’t always work, as evidenced by my Christmas trip a few years ago when I was stuck in Dallas during a freak Texas snowstorm. Snow and ice are possible a lot of places. And of course – don’t book the last flight […]

[…] your bags make it too) and you count your Christmas blessings.  And some years you find yourself stranded in Dallas thanks to a super-rare December Texas snowstorm.  And with a sick kid, to […]

[…] Can you book a nonstop flight with a short drive on one end rather than connecting flights?  Connecting flights can be dangerous as you can sometimes find yourself stranded overnight with a cranky little one (like was the case for me in Dallas last Christmas). […]

[…] We flew Southwest from Oakland to Raleigh-Durham, connecting in Chicago-Midway in each direction.  Changing planes in Chicago in winter is always a risky endeavor, but we luckily managed to avoid the storm schedules — just barely!  We certainly didn’t want a repeat of our stranding in the Dallas Christmas snow storm of 2012. […]