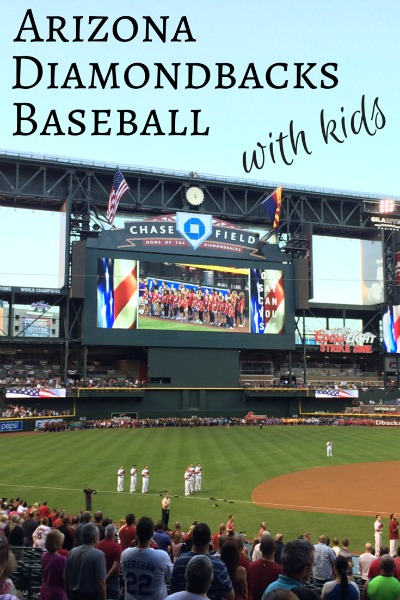 One way you can experience a place and its people in your travels is by heading to a local sporting event.  My husband and I have experienced a lot of sports around the world, from minor league baseball games in small towns in the South to regional rugby matches in the heart of the north island of New Zealand.  Rarely have we been disappointed.

When my family’s travels took us to Phoenix, Arizona this year for spring break, my sports-loving family definitely couldn’t leave town without seeing a Major League baseball game.  We were too late in the year for spring training, but that simply meant we had to see the real thing!

It was off to Chase Field for an evening with the Arizona Diamondbacks.  The experience didn’t disappoint.  Baseball with the Diamondbacks at Chase Field is about as good as it gets: a beautiful stadium, enthusiastic and friendly fans, and plenty of food and entertainment.

If you are headed to Phoenix, here is what you can expect at an Arizona Diamondbacks game.  It’s an experience you shouldn’t miss, even if you aren’t quite as enthusiastic about baseball as my family is.

Built in 1998, Chase Field still feels fresh and new and was clearly built with crowd efficiency in mind.  The field offers many of the modern amenities baseball fans have come to expect, including an updated HD screen added in 2008.  As much as I love my hometown Oakland Athletics, I must admit I was really jealous of the modern and comfortable stadium Phoenix has.  Oakland Coliseum definitely doesn’t rate in comparison. 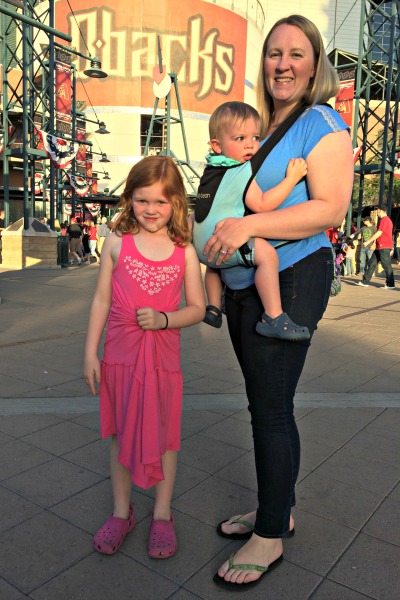 Ready for a night of baseball with baby in tow!

The stadium layout made for quick entry even on a busy Friday night.  My family was through the metal detectors with no wait even though we arrived during a busy hour – about 15 minutes before game time.  We also were amazed to find cheap garage parking directly right across the street from the stadium.  The logistics of attending a game with small children at Chase Field were minimal with the easy parking and the short lines.

Chase Field made history for its retractable roof over a natural grass field.  On a pleasantly warm spring evening, we were glad for the open air.  I’m sure visitors in the scorching summer months, however, will appreciate the roof. 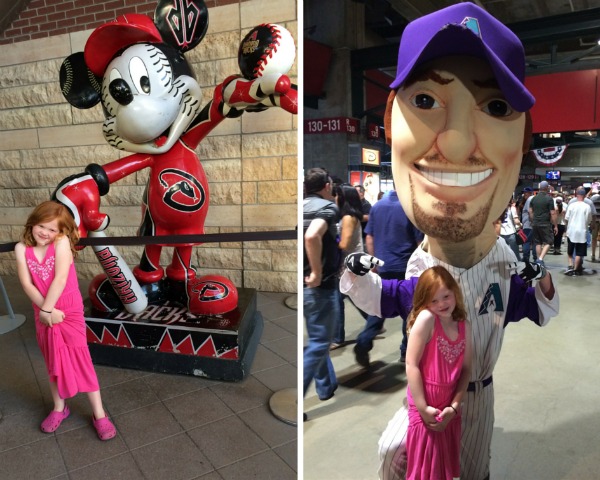 As with all stadiums, the seats at Chase Field are tiny to pack in the crowds, but they were not overly uncomfortable.  The stadium’s modern layout meant that there were a lot of good seats in the house.  My family sat on the third base side in the lower deck and had a great view.

One of the major reasons to go to a baseball game is to experience creative stadium food.  Chase Field had a lot of food choices and (again) minimal lines.  Baseball classics like the hot dog, peanuts, popcorn, and nachos were available alongside locally appropriate choices like Southwestern and Mexican food.  We also spotted a section of the stadium hosting food carts, providing even more variety.  Of course, there was beer and plenty of it.  It wasn’t all Budweiser or Coors Light.  Chase Field has definitely embraced the craft brewing trend. 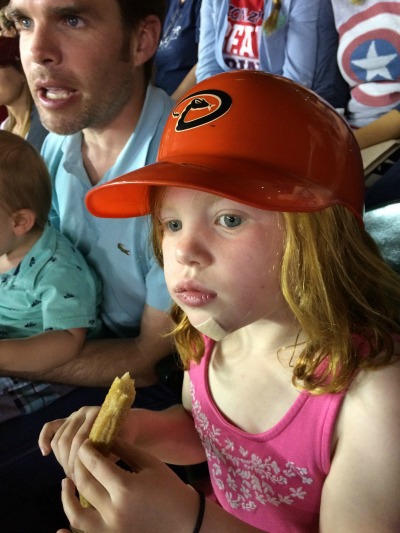 Not quite a churro dog, but it was a churro!

A family behind us introduced us to the latest food monstrosity taking the stadium by storm: the Churro Dog.  This treat is shaped like a hot dog but includes a churro in place of a hot dog and a long divided donut in place of a bun.  It is then topped with ice cream and chocolate and caramel sauces.  We were sorely tempted to try one, but decided to save the calories and live vicariously through our seatmates instead.  If you do want to try one on your next visit, I’d recommend splitting it.

One of the highlights of our evening with the Diamondbacks was getting to observe and know some of the fans.  My husband and I have been to hundreds of Major League games and have seen all sorts of fan behavior, from the wildly inappropriate to the apathetic.

What we saw at the Diamondbacks game made us convinced they had some of the best fans in baseball.  The fans were enthusiastic, supportive, and clearly loved their team deeply.  At the same time, they were all just plain nice.  Maybe the desert air makes for better sportsmanship, but the fans made the entire game experience about as family-friendly as I’ve ever seen.  We screamed our hearts out for the team but no one got genuinely angry or belligerent.  We made friends with our seatmates on all sides and were even dancing to the stadium music with them by the end of the game.

When attending baseball games with small kids as we often do, boredom inevitably sets in.  It is hard to keep their attention on the game for hours on end, so my family always plans to take a break and go to the kids zones that most Major League ballparks have. 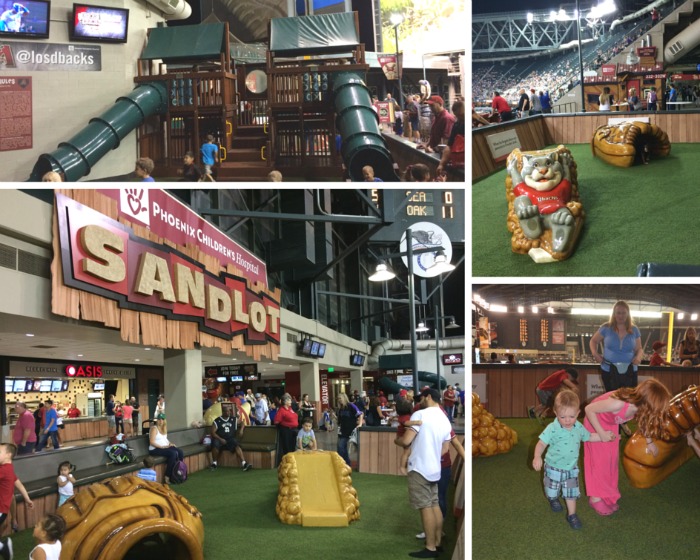 The extensive kids play areas, “The Sandlot” at Chase Field.

At Chase Field, they do even better: they have three!  The play areas are divided by ages so that the little ones don’t get trampled and the older kids can still play on challenging playground equipment.  We discovered the areas too late in the game to take full advantage, as they close after the 7th inning stretch.  The Diamondbacks’ Big Heads perform in the area during the stretch, so my advice is to get there an inning or two earlier to play and then stick around for the song and show. 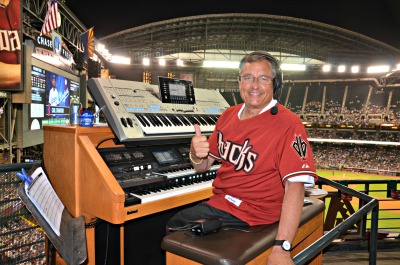 Visiting with the Diamondback’s organist after the 7th inning stretch.

Also in the Kids Area is the real stadium organ, played by local fan-favorite Bobby Freeman.  Once done with his playing duties, he chatted up our kids and signed autographs.  It was like stepping back in baseball time.

One thing that always makes a baseball experience so perfect is seeing a good game.  I must admit our experience was probably colored a bit by the fact that we saw a great one.  It was a classic pitcher’s duel against the Dodgers with very few runs scored.  The Diamondbacks scored early with three runs in the second inning, but LA came back to score three more by the end of the fifth inning.  By the end of nine innings, the game was tied 3-3 and went into extra innings.  The Diamondbacks then pulled if off in the bottom of the 10th with a walk, a couple of stolen bases, and a single to drive in the runner.  The crowd went wild!

To top off the great night, we were treated to fireworks afterwards.   With the extra inning and the fireworks show, we were beyond pushing our children’s bedtimes.  We didn’t get back to our hotel (the Pointe Hilton Squaw Peak in Phoenix) until nearly 11 pm, but we didn’t care.  It was a night of great baseball.  We’ll be back, Phoenix!

Disclosure: The Diamondbacks provided complimentary tickets to my family for review purposes.  As always, all opinions are my own.