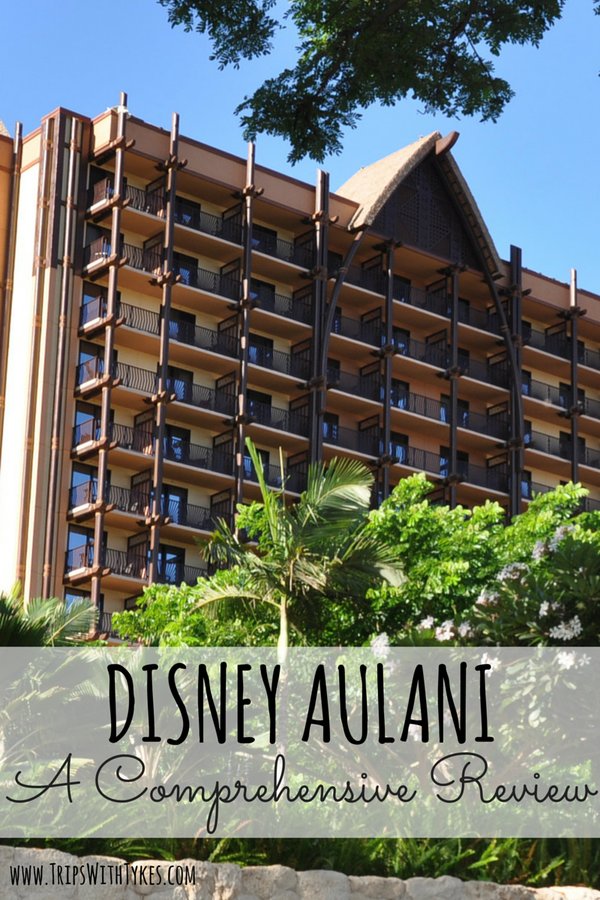 My family went to Disney’s newest resort, Aulani, for four nights in March.  We packed so much into those four days that I’m only now just getting around to writing all of it up.

Let me start by saying that the trip was truly magical.  Our daughter was just a month shy of her fourth birthday, and she already adores all things Disney, having visited Disneyland multiple times.  She also is a big fan of all things Hawaiian after our big Hawaiian family vacation last summer, so the trip was the perfect dream vacation for her.

Below are some reviews of the various aspects of our experience, as well as a few tips for those of you considering Aulani for your next Hawaiian family vacation.

I’ve already blogged about how we were able to save some serious money (and snag a studio condo with kitchenette instead of a standard hotel room, along with free parking) by renting from a Disney Vacation Club owner.  It’s a gamble I’d definitely take again.

Planning our trip was otherwise very easy, as Aulani is located just about 20-30 minutes west of the Honolulu airport.  We rented a car in advance and relied on our iPhone’s Maps App to get us there.  Easy, easy! 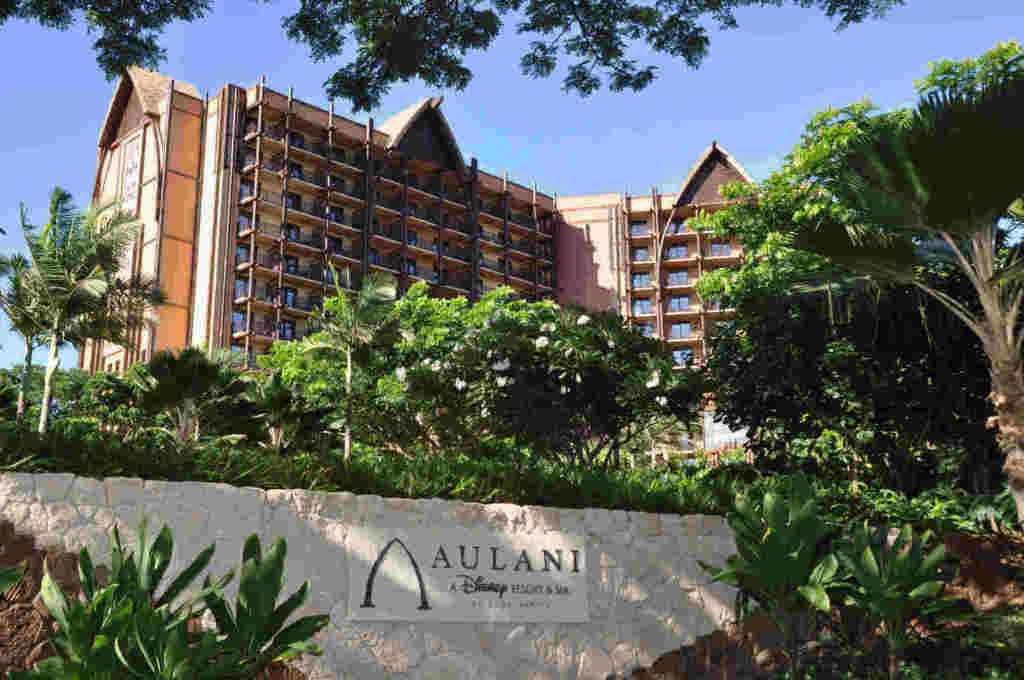 The resort feels authentically Hawaiian in attitude and decor, and not overly Disney.  As much as I love Disney World’s Polynesian Resort, this is several steps up in quality and authenticity.  Be aware that the resort is quite large, so it probably isn’t for folks who enjoy an intimate and cozy Hawaiian hideaway.  But for families with kids, it can’t be beat.

During our visit, there was quite a bit of construction going on, as the resort is undergoing its final Phase 3 expansion.  The construction areas were walled off nicely, and we didn’t really experience any additional noise as a result.  It will be interesting to see how the construction affects guests once the summer crowds arrive.  We were lucky to be there when the resort wasn’t at full capacity, so having a few areas closed off didn’t make the rest of the resort feel too crowded. 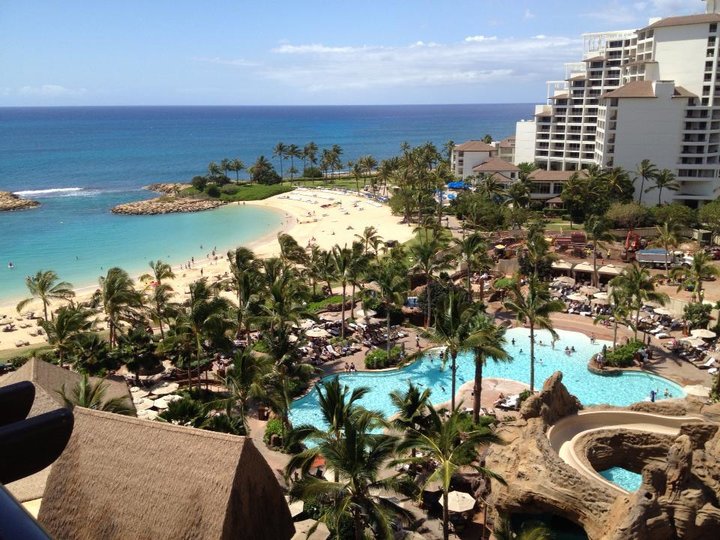 You can see some of the construction area on the far end of the opposite building.

Surprisingly for Disney, the shopping options at Aulani were few and far between, with the resort only having a single boutique/convenience store open while we were there.  We did see evidence of some construction of another shop, so it seems as if Disney is working to fill the void.  Disney knows there is money to be made in merchandise!  The shop that we did visit was quite nice and had a variety of souvenirs.  We snagged my daughter an Aulani-print Hawaiian dress that I know she will wear a lot in the coming year or two.

Aulani was at its best when it came to things to do, and we took advantage of many of the options throughout our visit.  Every day, the resort publishes a pamphlet with the day’s activity schedule, so be sure to pick one up when you first go down to the pool in the morning so you can plan your day.  There were character meet-and-greets throughout the day, special events on the beach, family movie nights on the lawn, and the Starlit Hui dance show, to name a few.  The Starlit Hui is a highlight, but only takes place twice a week, so be sure to inquire ahead of time so you don’t miss it. 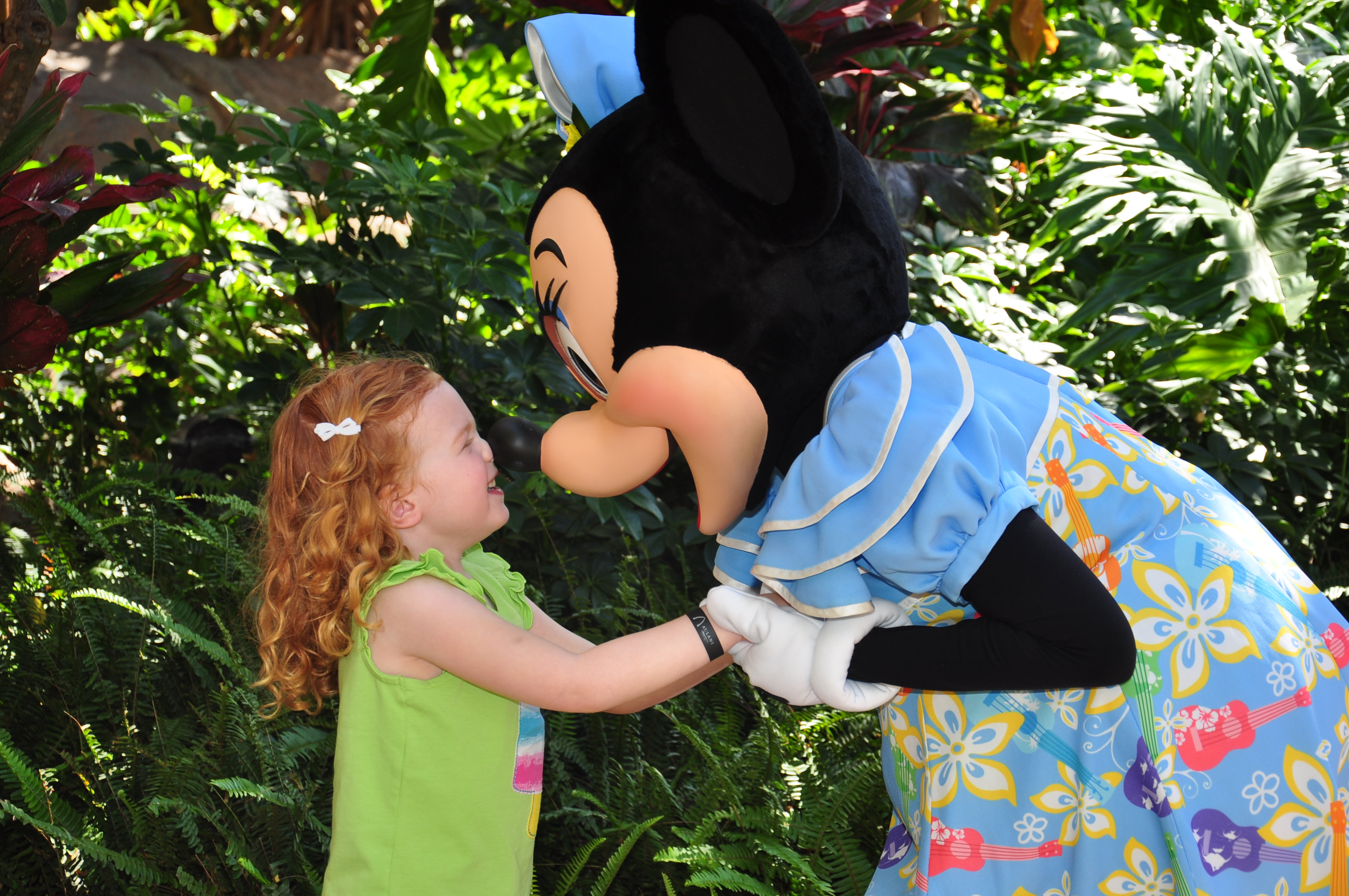 Our little one couldn’t get enough of Minnie Mouse!

Stitch was a fixture around the resort.

Swimming options abounded too.  There are multiple pools of varying depths, complete with a lazy river and two waterslides.  Best of all for parents of toddlers and preschoolers is the Menehune Bridge, a water play area that is safe even for non-swimmers.  Our daughter spent many hours going up and down the play structure and doing the kiddie slides there.  You really can never leave the resort for even a week-long vacation and yet have something new to do daily.

A view of the water play area, Menehune Bridge.

Finishing a water slide trip for the 137th time!

We were also happy to find that chair rental on the beach is complimentary, as that is a cost that can really add up on a lot of Hawaiian vacations.  If you have a redheaded or fair child like we do, we use the umbrellas!  There were plenty of water sports rentals (for an extra fee), and even free sand toys for the little ones so you didn’t have to lug an extra bag from your room each day.

First time on a paddleboard with daddy.

The food was the only mediocre part of our visit.  Disney doesn’t seem to have mastered high-quality cuisine and instead is stuck in a bit of a theme park rut.  Menus abound with pizza, chicken nuggets, and the like.  This is probably great for most parents of four-year-olds, but we did find ourselves wanting a little more variety.  A lot of the reviews I’ve read of Aulani complained about the price, but we really didn’t think it was that expensive, having vacationed in Hawaii before.  Things simply cost more there, and you pay a premium for the convenience of eating poolside at your resort.  That said, it is likely a bit overpriced when the overall quality is taken into account.

The best dining deal going at the resort is the shave ice stand, in the middle of the pool area.  You can get a large shave ice for $3 with any combination of three flavors.  This was our afternoon snack daily. 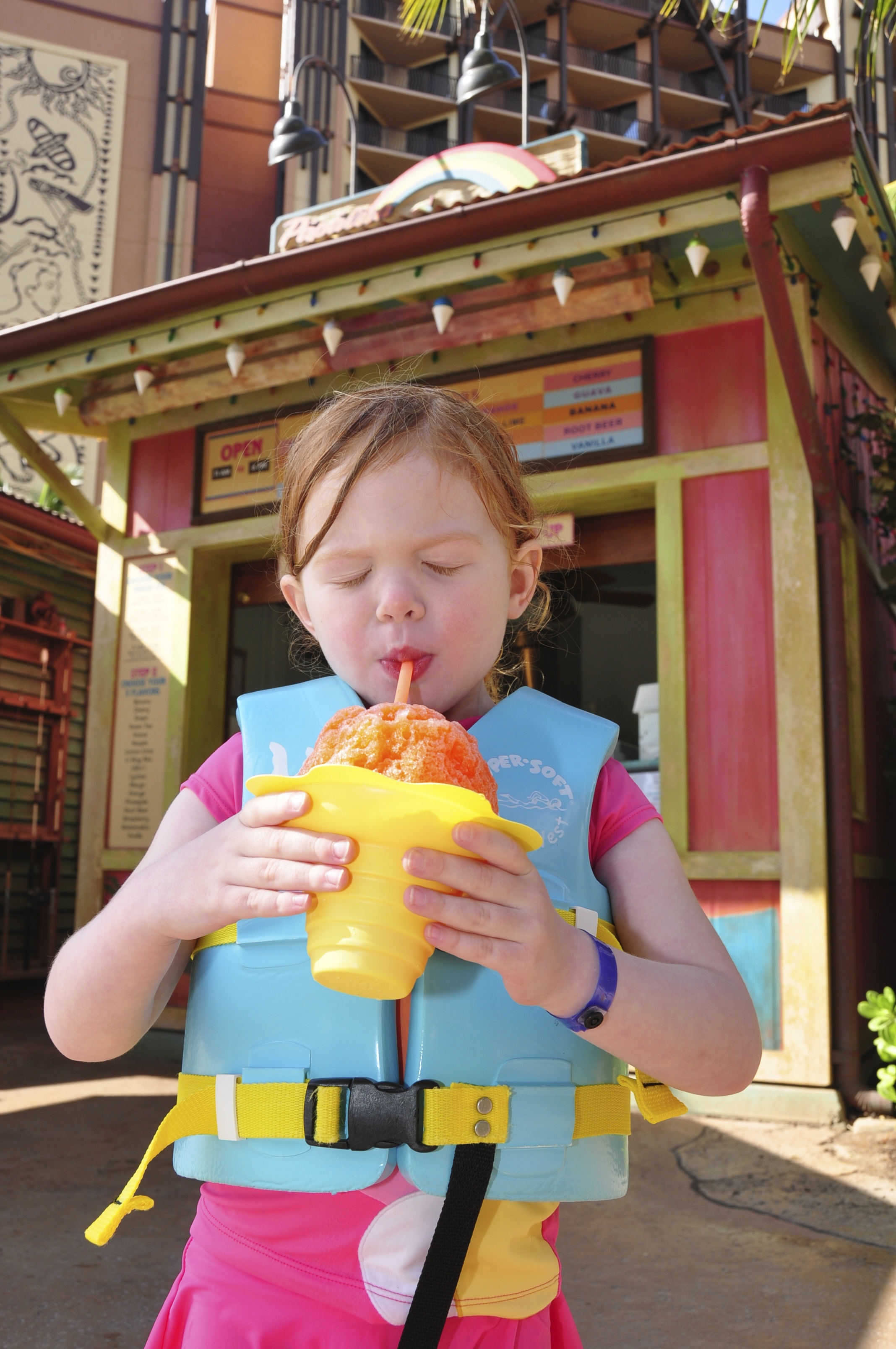 We dined at all the major dining locations at the resort except the fancy restaurant, Ama Ama.  We tried to get in there twice, but it was booked solid, so someone must be paying the big bucks for Disney food.  Strangely, we felt that we got the best value within the resort from the character breakfast at Makahiki.  Like all Disney character breakfasts, it was pricey, but the extended interaction that our daughter got with the characters and the huge variety of food options for adults and kids alike made it worth our while.  The staff even took care of a special request for us, helping us tell our daughter that she was going to be a big sister by delivering a special treat when we were ready to spill the beans!

Posing with Mickey at the Makahiki character breakfast.

Virginia learned she would be a big sister on this trip thanks to some help from the Makahiki staff!

The best choice we made while we were at Aulani was to venture outside of the resort for some of our meals.  Aulani is the in Ko Olina area of O’ahu, and there are several restaurants nearby (both walking distance or a short drive).  My husband and I dined twice at Roy’s Ko Olina, just about a quarter mile down the road.  Roy’s is walkable for adults, but a bit too long for little ones.  The prices were probably a tiny bit cheaper than Ama Ama, but the quality was top-notch in most instances.

The highlight of our dining experience, however, was Monkeypod, a local restaurant in the shopping center directly across from Aulani.  Food is locally-sourced and deliciously-prepared.  And prices were down right cheap for the quality of the restaurant and service (plenty of dinner entrees were well under $20).  Next time we visit, this will be first on our list for several meals. 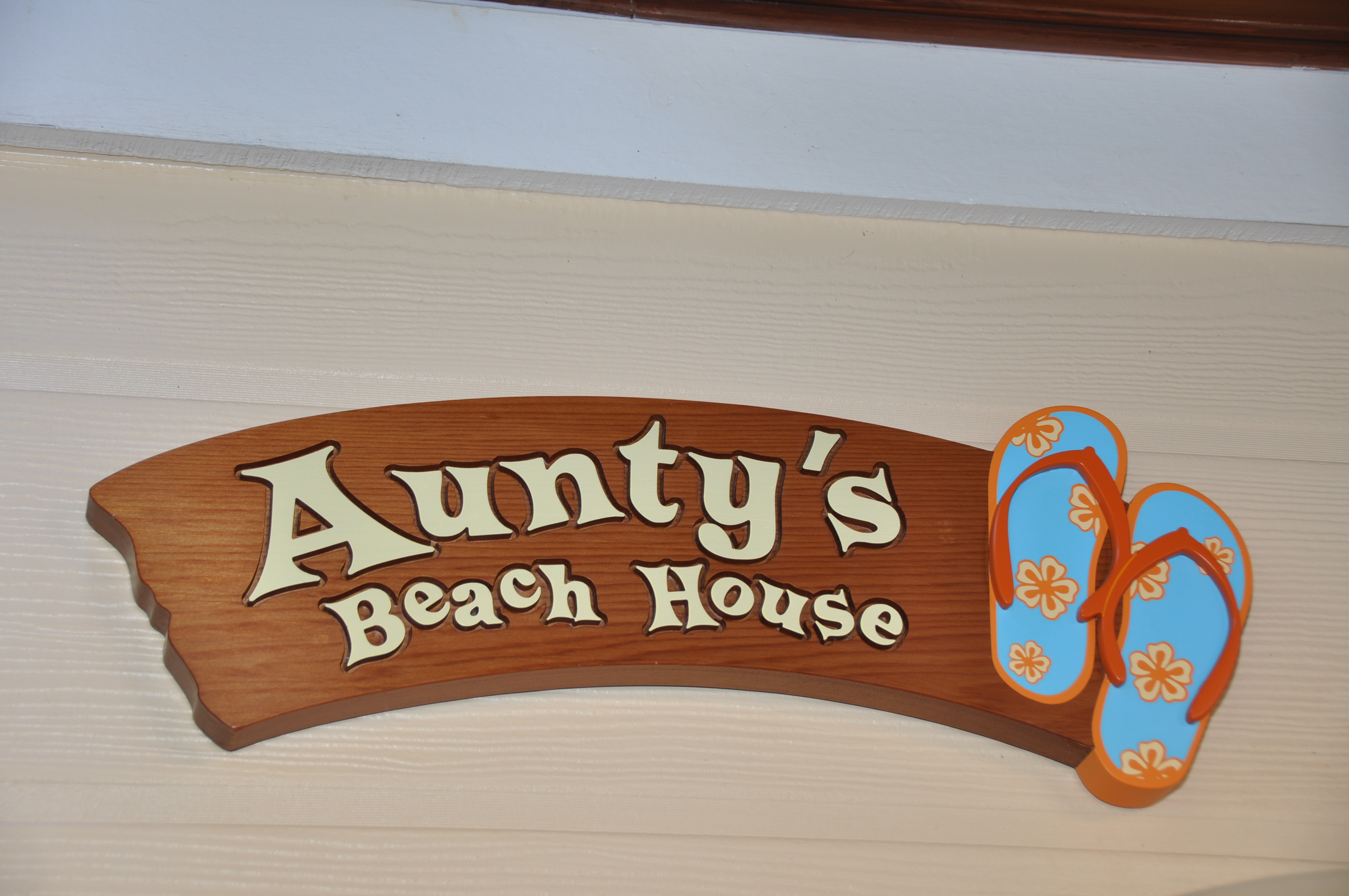 I’m a big fan of parents having an occasional break from their children on vacation, and this is the area where Aulani really stood out.  Aulani’s kid’s club, Aunty’s Beach House, was simply the best kids club I’ve ever seen.  And best of all — it is free!  Kids have to be 3 years old and potty trained to attend, so factor this in when planning your vacation.

The “house” really felt like a typical Hawaiian house, with multiple rooms for kids to explore and a backyard with a play area.  There was a room with a stage for character shows, a dress-up area with Disney costumes, a movie room, a computer room, and lots of areas for arts and crafts.  At any given time, I probably spotted 15-20 counselors roaming the facility and supervising activities, so there was plenty of quality care provided.

Aunty’s Beach House had special programming and events during the day and evening (you may need to register beforehand for some of the most popular to secure your child a spot).  Our daughter had a blast attending the afternoon programs run by a “mad scientist.” In one program, the kids were able to erupt their own volcano, and in another, they made Stitch’s space goo.  Both were big hits and our daughter was regularly begging to be dropped off at Aunty’s.  Little V also loved the comedy show program that was available one evening, where the kids learned to tell jokes and even got a chance to do their own version of  stand-up comedy on stage in front of the other kids.  Apparently, little V was one of the youngest in the group, but fearlessly got on stage to tell this zinger: “Why did the chicken eat the meatball? …. Because he was hungry!” 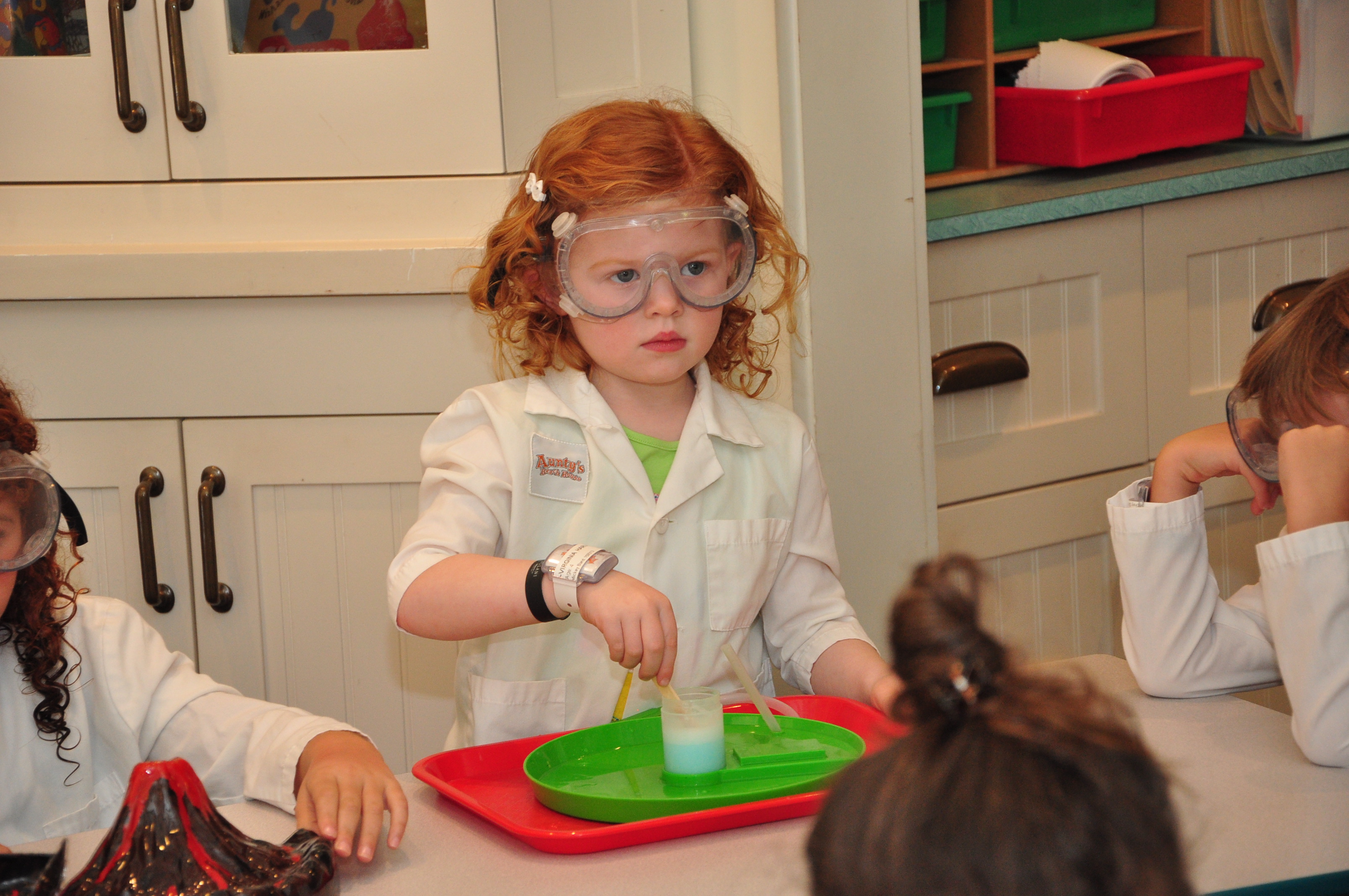 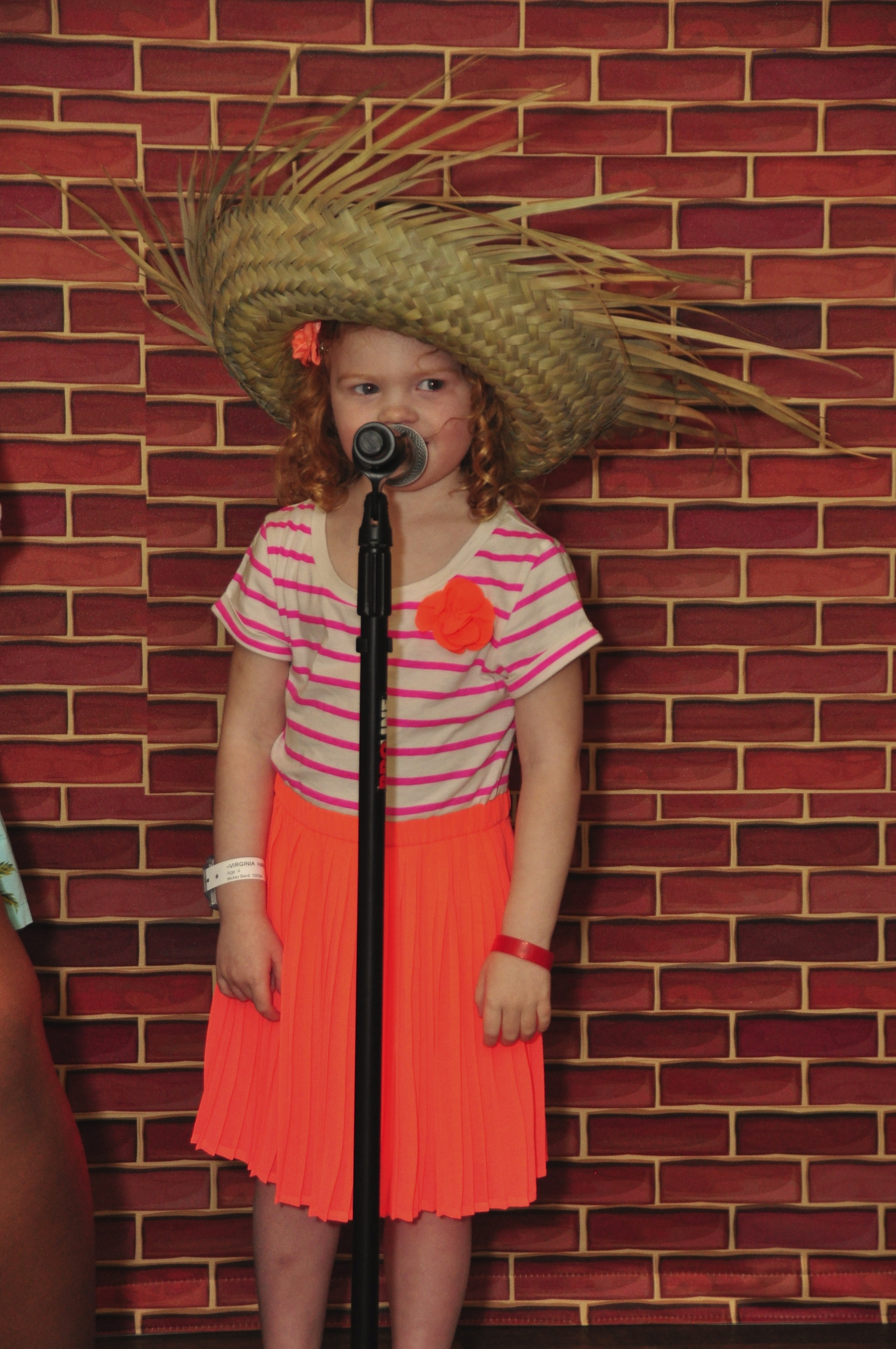 Hamming it up at the Aunty’s Beach House comedy hour.

Security at Aunty’s Beach House was top notch, with each child being tagged with a GPS-enabled bracelet upon check-in.  The technology was so good that when we arrived to pick up our daughter, the front desk was able to tell us exactly what room she was in within the kids’ club.  Pretty impressive!  We also had to establish a secret password and have our room key for ID in order to pick up our child.  It was nice to know that she was so secure while we were enjoying an adult’s night out.

Considering Aulani for your family?  Here are a few tips to consider. 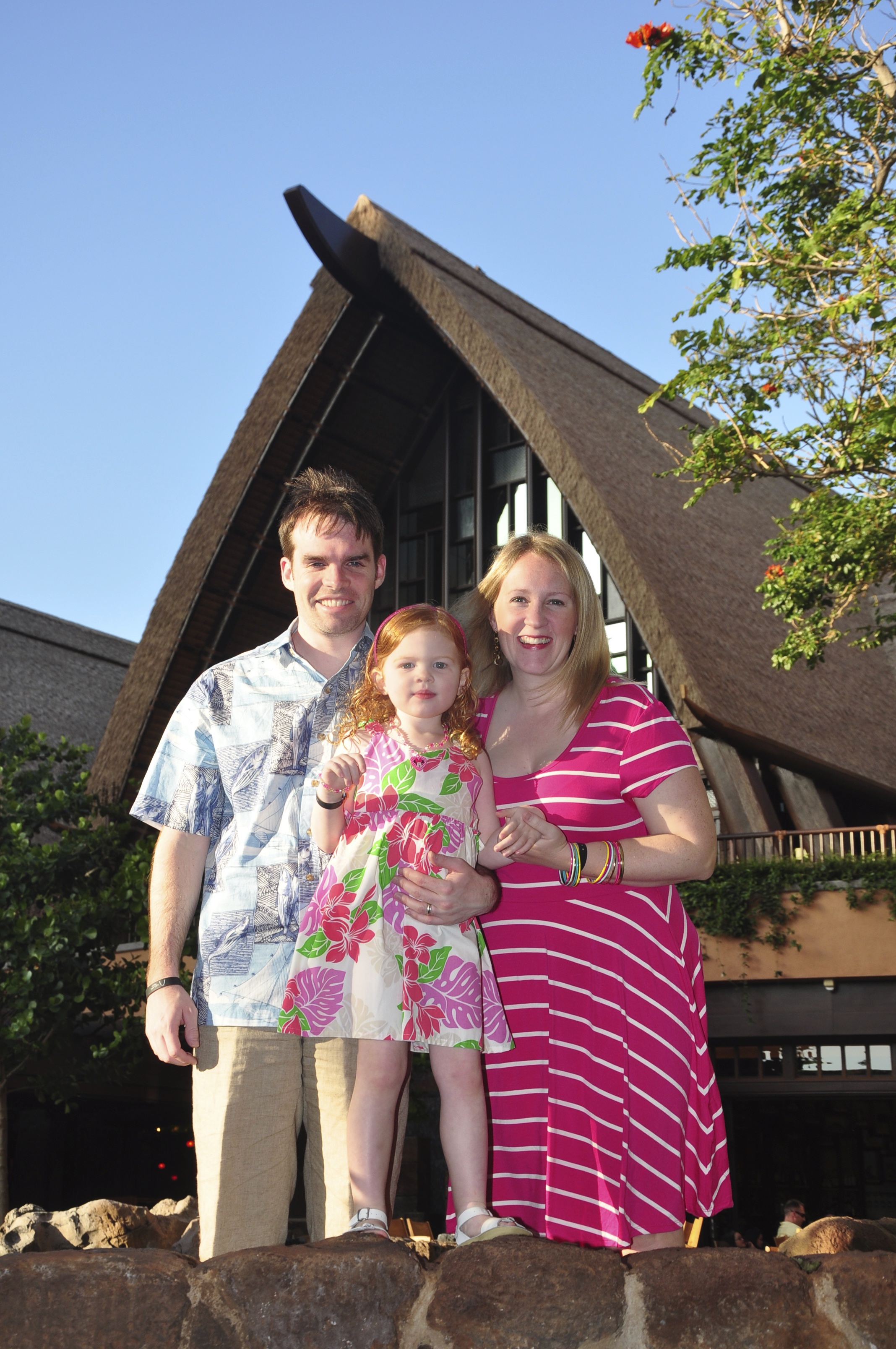 Aloha! We’ll be back, Aulani. 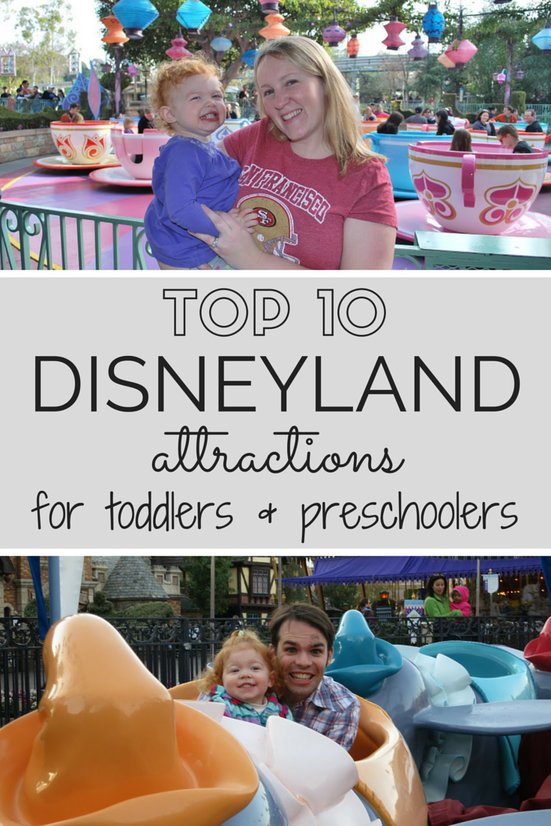 Would you really not recommend going before 3? We're trying to do a getaway with our 18 month old, and don't mind running around the little kid splash area with her. I know we won't be able to enjoy dropping her off for some free time, but figured there'd at least be enough entertainment there for her to enjoy? Would love to know if you really think it won't be worth it

[…] trip, but judging by their reaction to other similar water playgrounds (like Menehune Bridge at Disney’s Aulani), this spot would have been a major […]

[…] through Vacatia which often offers discounts you can’t find elsewhere. Don’t miss my full review of the Aulani if you are considering a stay with your […]

Summer Water Safety: Tips to Keep Kids Safe at the Beach or Pool - Trips With Tykes

[…] even experienced a momentary scare or two. I know it can happen to anyone. I remember well being at Disney’s Aulani in Hawaii a few years ago. I was traveling with my husband and daughter who was just a few weeks shy of her […]

[…] noticed on our visit that the hotel is starting to show a bit of age, particularly when compared to our recent experience at Disney’s Aulani in Hawaii (a newer hotel with similar […]