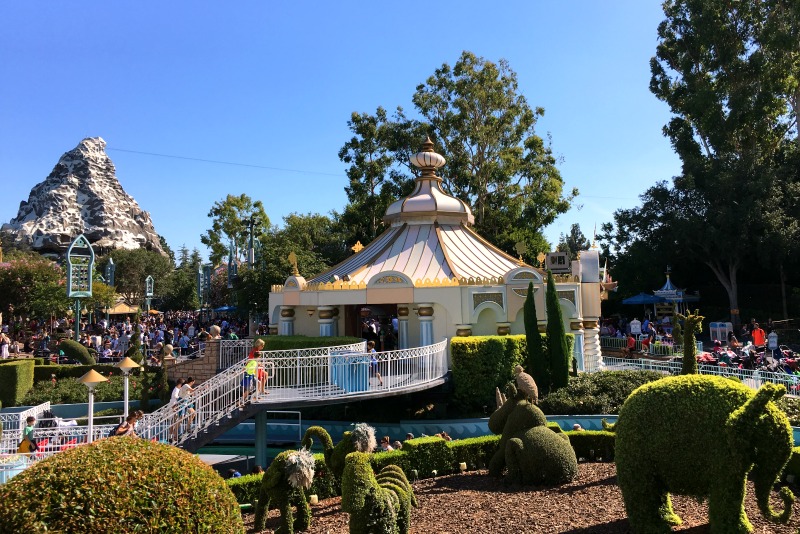 Everyone has been talking about Disneyland’s brand new MaxPass. MaxPass allows guests to select FASTPASS times on their phones. I think it’s pretty darn amazing and presents some serious hackability potential for guests who use it smartly. But that’s for another post!

What no one has talked about is how MaxPass has totally changed the game for those of us who use Rider Switch. What is Rider Switch you ask? It’s a perk that Disney offers to families with babies, toddlers, or other young kids below a ride’s height requirement or just too scared to ride certain rides. It allows adults to trade off caring for the little ones while both still sneak in a few thrill rides. It saves parents from doubling their wait time just because they have a baby by allowing the second group of riders to skip the line. 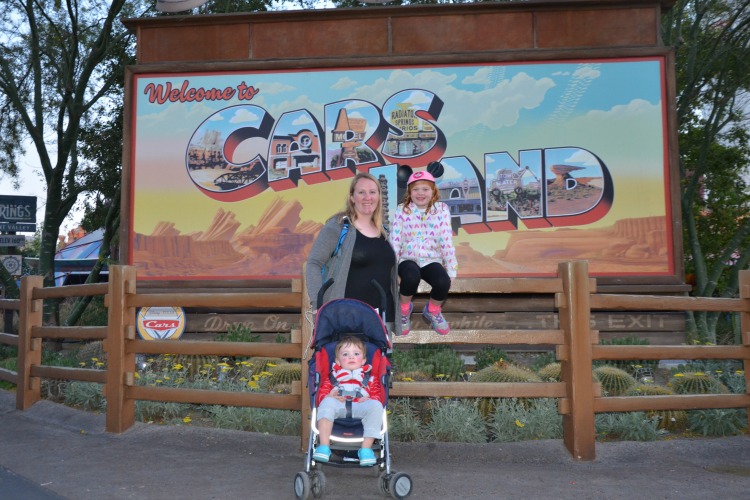 Since I focus a lot on travel with babies and toddlers here at Trips With Tykes, I know a lot of my Disneyland-loving readers use Rider Switch. So on my last trip to Disneyland, I made it my mission to figure out how MaxPass has changed this super useful feature.

Before MaxPass, here is how Rider Switch worked using a typical family of four like mine with two adults, one older child (girl), and one younger child (boy). Mom and big sister choose an attraction to ride, going either through the regular or FASTPASS line. Dad and little brother remain behind. 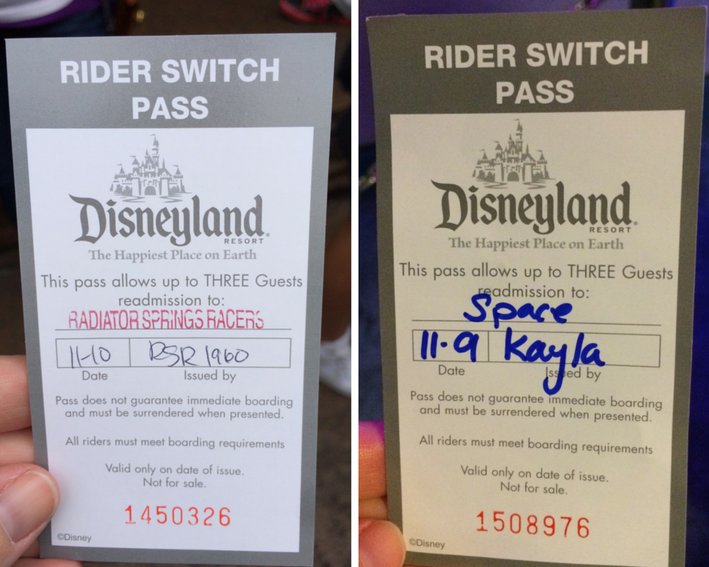 What Disneyland Rider Switch passes used to look like before MaxPass.

The old Disneyland Rider Switch had two major hackability features that made the perk even better for families with young kids. First, the return ticket allowed up to three people to return for the second ride. So that means big sister gets to ride twice. Can you tell why my 8 year old daughter is a fan?

The second feature is that the tickets could be used any time later that day. You could collect a bunch as the day went by and save them up to redeem them later. A great strategy was to amass them in the mornings when standby lines were short and then redeem them when standby lines were long in mid-afternoon hours. Or, you could even save them up and use them on a date night while the kids were back at the hotel with a babysitter. Yes, my husband and I did that once (#NotAshamedToAdmitIt). 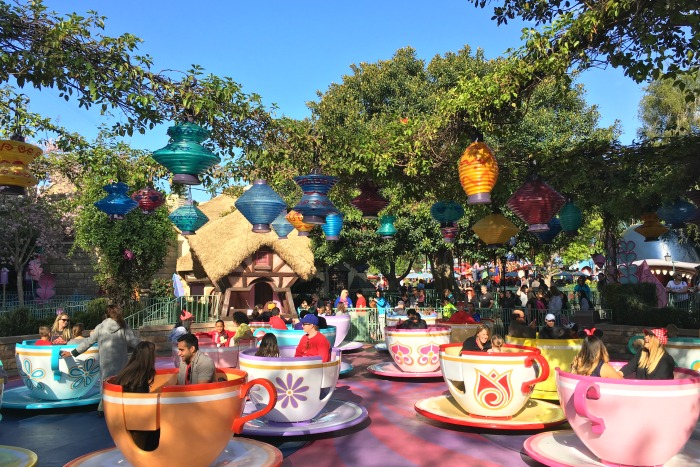 The new Rider Switch still serves the same goal – minimizing waits for families who need to split up to ride thrill rides. But there are three big changes of note in more detail below that limit some of its flexibility:

Rider Switch is Tied Digitally to Your Ticket 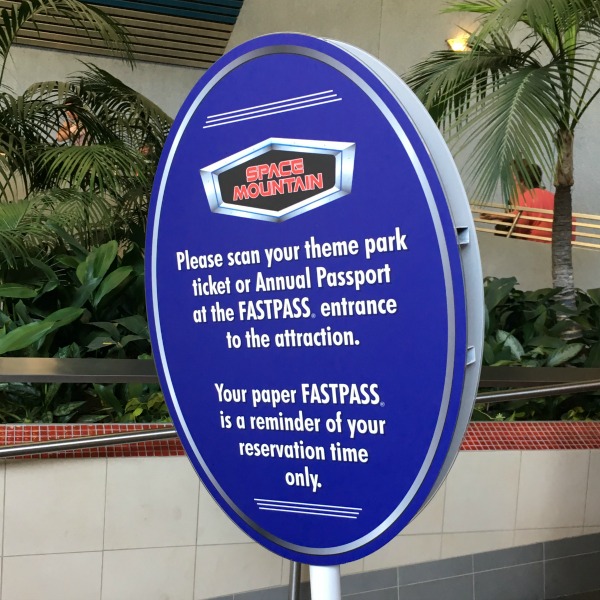 Goodbye to paper! Signs now remind Disneyland guests that everything is digital.

The question mark this raises is whether the big sister from my example can still ride twice: once with mom as part of the first group of riders and once with dad in group 2. Per the advice of several cast members I chatted with on my trip, the answer is still yes.  Cast members at the line entrances to both Guardians of the Galaxy – Mission: BREAKOUT! and at Space Mountain both indicated to me that they were allowed to add the Rider Switch entitlement to any three tickets, even someone in the first group of riders.

It’s worth noting that the Disneyland website’s language is not clear that this double riding is allowed. Disneyland updated the page that explains how Rider Switch works in the last few weeks. This explanation talks about dividing a family into “Party 1” vs. “Party 2” with no indication that big sister can be in both. As far as I can tell, the website doesn’t get it quite right when it comes to how Rider Switch operates on the ground.

Rider Switch Now Has a Time Limit to Redeem 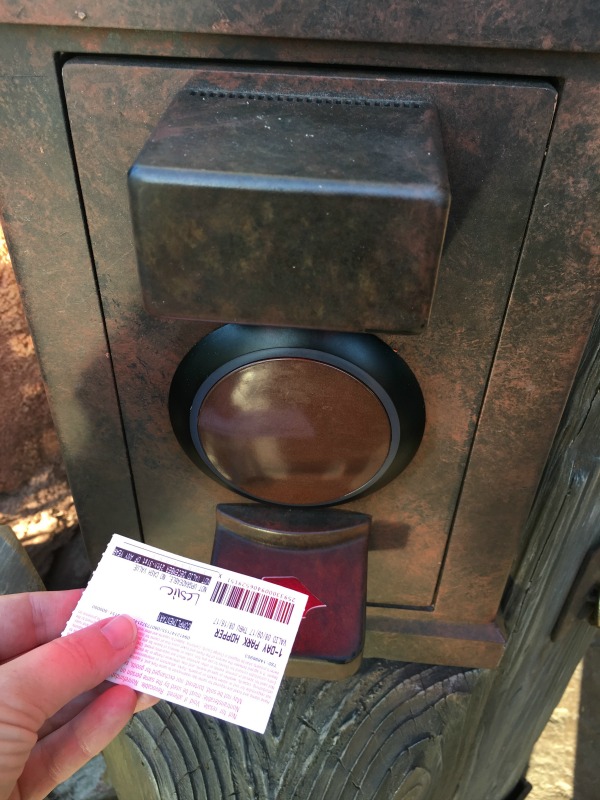 Machines at ride entrances are where you scan your ticket or smartphone to redeem Fastpasses or Rider Switch passes.

The most significant change that families will care about most is this: Rider Switch now has a time limit. While the old Rider Switch tickets could be used any time later in the day, the new system effectively imposes a one hour time window in which to return. The cast members explained to me that this window usually starts about 15 minutes after the first group gets in line.

The timing gets a little more complicated when the first group is planning to use the standby line. Standby lines can often be well over an hour for some thrill rides meaning that an hour window for the second group to ride doesn’t make sense. Cast members are supposed to account for this in setting the return time for the second group to start later, but it has apparently been a bit haphazard so far. (Note that I do not recommend using the standby queue for thrill rides with waits longer than 20-30 minutes. That’s what Fastpass is for! Savvy Rider Switch users should rarely encounter this issue at all.)

The bottom line? There is now a very narrow return time window. This means you don’t have time to do much else except just switch off immediately. Maybe your whole family can squeeze in a ride nearby with a short standby wait, but that’s about it. Ultimately, it could mean a lot of sitting around and back-to-back waiting for the smaller child.

Only One Rider Switch at at Time

A further change to Rider Switch is the new rule that a ticket can hold only ONE Rider Switch ticket at a time. So if you grab one for Space Mountain early in the morning and want to hop right over to Star Tours to grab another one, you can’t do that until your second group has ridden Space Mountain first. 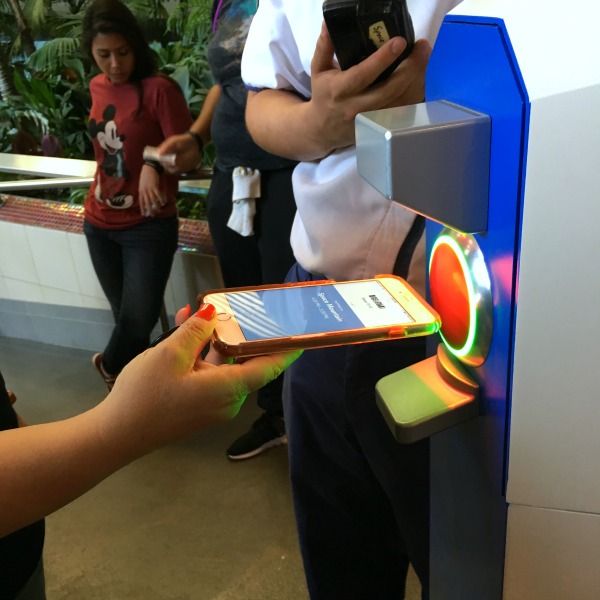 Is you have been a big user of Rider Switch as I have, you probably realize that these changes make Rider Switch less flexible.

Is there a silver lining here? Sure. First, big siblings can still ride twice – as long as you remember to scan the right tickets as you are getting the Rider Switch passes loaded in the first place. That was a privilege that could have been taken away. Luckily, it remains.

Second, what was taken away by Rider Switch can now be made up for by MaxPass. MaxPass has its own hacks and the ability to squeeze many more rides into a single day when used intelligently. Savvy families who learn how to maximize MaxPass will benefit. So shift your thinking to hacking Rider Switch over to hacking MaxPass. Personally, I bet I will probably use Rider Switch less in the future but will ultimately be redeeming more FASTPASSES thanks for MaxPass. So the difference will probably come out in the wash.

Given all this, it’s going to be important to monitor Rider Switch closely in coming weeks to see if any further tweaks are made. If you are headed to Disneyland with a young child, pay close attention to 1) your Rider Switch return times and 2) your ability for big siblings to ride twice. And come report back! 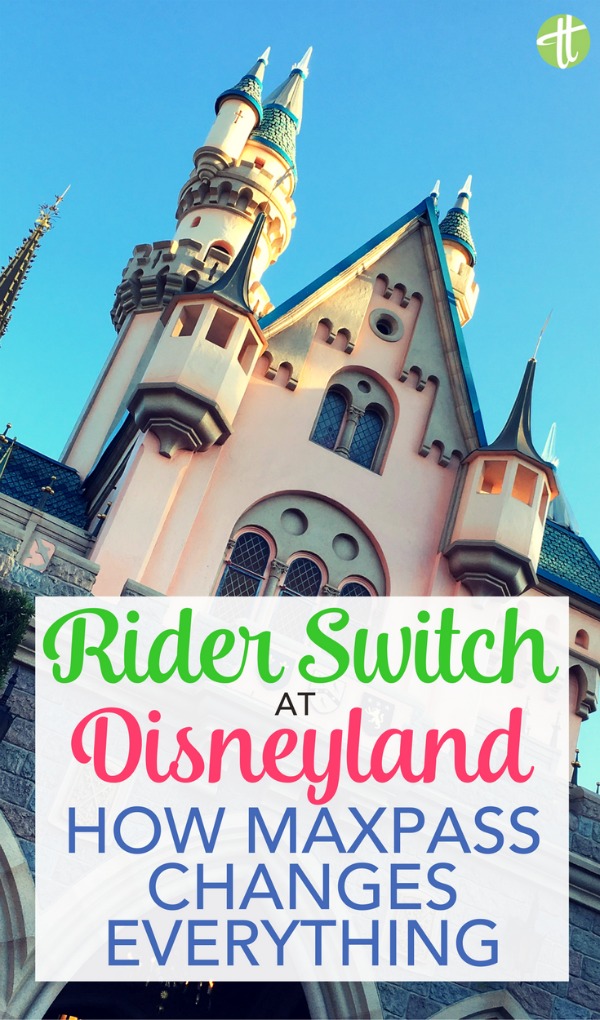 How did I know to even investigate this change to Rider Switch? A member of the “Disneyland with Kids” Facebook group I operate with three other Disneyland bloggers tipped us off – she had remembered having a time limit on her Rider Switch pass just a few days before. We are breaking Disney news over there, folks! Come join us.

H/T to Becca Robbins of Love Our Crazy Life for the title of this post. Go check out her Disneyland tips on MaxPass.

Disclosure: Disneyland provided me with a complimentary ticket with MaxPass on my last visit. As always, all opinions are my own.

I HATE this new system. The biggest drawback is the waiting as you stated in the article. You could get the rider switch and go on another ride more age appropriate for the other kid/kids and eventually work your way back. But now you have to just sit there and wait since you only have an hour window. It made for a lot of boredom which is not something I want when at Disneyland. It was more frustrating than anything, also trying to keep track of what tickets held the rider switch. I don’t like that they got rid of paper Fastpass and now make you use your ticket as well, it’s almost like there’s no point in even giving out the paper Fastpass. We also ran into a problem when a few people wanted to leave the park for dinner and we already had fast passes for a ride, we had to match the ticket barcode to the Fastpass to make sure they could use them. It’s just overly complicated for no good reason.

Do you have to have a max pass to use rider switch now?

Is it possible for my wife and I (and two kids 2 and under) to just buy maxpass on one ticket and then assign three other ticket for rider swap? Or I guess per the first commenters post if we want to maximize more we will just buy two maxpasses and get fastpasses for different rides while utilizing riderswap on the ticket that we didn't get the fastpass on at the time....

One other question regarding fast passes - what happens when you cancel a fastpass reservation? Do you lose the opportunity to book another fastpass until the next one comes?

Does the scheme described here:

still work? That is, the strategy of not having everyone get a Fastpass to the first ride, only those who are in group #1?

That is, will this still work with the Fastpasses digitally tied to the park ticket:

It seems like that should still work. Is that correct?

Now I'm less sure about once daughter is 3+ and will have her own park admission. Previously, that ticket could now be used to obtain Fastpasses which could be used by a different individual. But now that the Fastpasses are tied to the park admission, it should be clear that she can't actually ride most of the Fastpass-enabled rides. So now that hack doesn't work anymore, right? Can't use that 3-year-old's park admission to get extra rides for older sibling? Or can you?

I searched elsewhere on the web, and my question is answered: the scheme still works.

For the second part, I still haven't been able to find an answer. But I suspect I know the answer. It seems to me that while previously you could use the youngest child's park admission to get a Fastpass which is usable by others in the group, that is no longer true since the Fastpass would be tied to the 3-year-old's ticket.