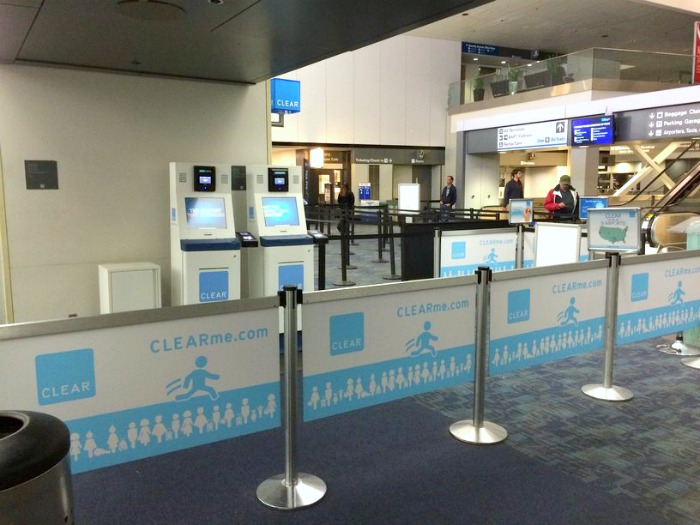 If there is one thing that unites air travelers everywhere, it is the mutual hatred of airport security lines. Luckily, there are more and more ways to minimize your time in TSA lines. Airports now have special lines for family travelers, airline elites, and premium cabin travelers. The TSA itself has gotten in on the action by offering a paid service called TSA-Precheck that requires a background check in exchange for more expedited screening. Passengers who are accepted into trusted traveler programs like Global Entry and NEXUS (Canada’s version of Global Entry) are also entitled to TSA Precheck. In short, there are a lot of ways to skin the airport security cat.

One of the not-quite-as-well-known methods for circumventing long airport security lines is a paid service called CLEAR. CLEAR recently provided me with a complimentary membership in order to review it for you.

How Does CLEAR Work? 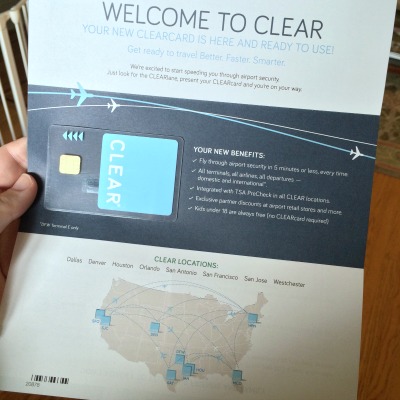 In order to use CLEAR, you need to sign up, pay the registration fee, and be fingerprinted and iris scanned in one of the CLEAR registration locations (you can do it at a participating airport but occasionally CLEAR offers enrollment centers elsewhere). CLEAR used to send you a membership card in the mail a few days later, but CLEAR has recently gone cardless which makes things even easier and your wallet a little lighter.

Once you are a CLEAR member, you simply show up at a participating airport and head into the CLEAR lane next to the main TSA lines. Your fingerprint will be scanned for identification verification at the kiosk in a matter of seconds. Then the CLEAR kiosk employee will escort you directly to the TSA checkpoint. In my experience, I’ve always been taken directly to the place where travelers are grabbing bins and putting them on the belt right before go through the metal detectors – usually there are only 3 or 4 people in front of me.

You likely know what this means: with CLEAR, you get to CUT. THE. LINE. All of it. It’s pretty darn amazing. And you feel a little like a VIP in the process.

CLEAR also works in conjunction with TSA Precheck if you have it as well. If you have both, the CLEAR employee will take you to the front of the TSA Precheck line where you get the benefits of your Precheck membership too (no removing liquids, laptops, shoes, or belt).

What does CLEAR Cost? 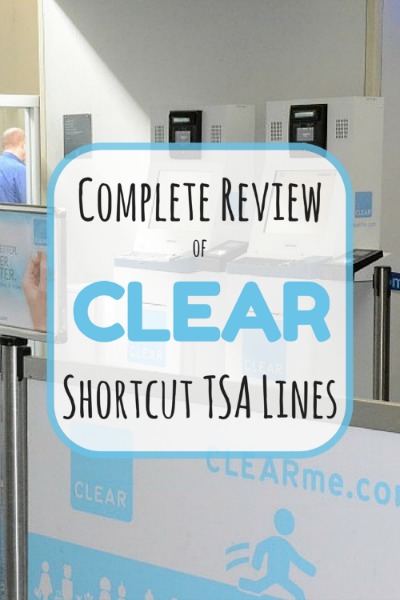 Of course, all of this this amazing line-cutting comes at a cost. CLEAR membership is currently $179 per year and spouses can be added for $50 more, so it doesn’t come cheap. For families, however, one benefit is that kids under 18 accompanying a CLEAR family member can use the CLEAR lanes at no cost and do not need to pre-enroll.

Where Can I Use CLEAR?

The other major feature to know about CLEAR is that it is currently only in a limited number of airports, although it is implementing a strategy to expand. If it was available as widely as TSA Precheck, it would truly be a frequent traveler’s dream. You can currently find CLEAR at the following 12 airports:

CLEAR is also expanding into expedited security at baseball stadiums and currently offers the services for the San Francisco Giants. As someone who has waited over an hour or more to clear stadium metal detectors, I think this is a great innovation and hope the service continues to expand!

The Bottom Line: Is CLEAR Worth It? 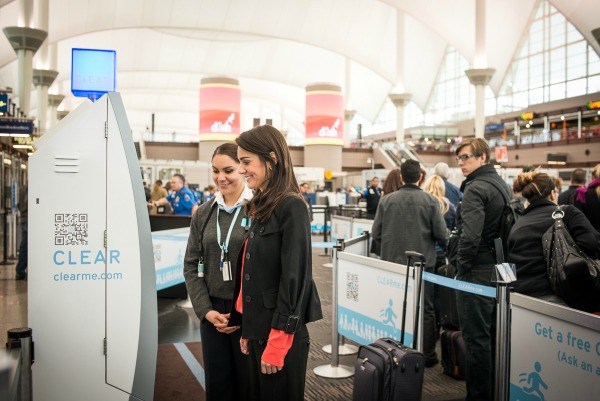 In practice, CLEAR works really, really well. Every time I’ve been able to use it, I’ve been through all of airport security from start to finish in less than 5 minutes, even with a young child and toddler in tow. The CLEAR employees are kind and helpful and usually even help me with my carry-ons and in grabbing bins for me to use.

But just because it works amazingly well doesn’t mean it is “worth it” in the larger sense. When considering whether CLEAR is worth it to your family, you also have to consider the other two elephants in the room: 1) cost and 2) availability at the airports you use most.

If your family flies only once or twice a year, CLEAR obviously isn’t for you. You can’t get enough value out of the membership fee. However, a lot of family travelers have someone in the family who travels for work. Here is where CLEAR can start to make a lot of sense. If one adult in your household travels regularly for business and would get a lot of use out of it anyway, there is a very good case for enrolling the second spouse in CLEAR for just $50 more so the whole family can use the service when you fly together.

If you already have TSA Precheck, do you really need to pay another fee to shortcut lines? Maybe not. The most compelling argument I hear against CLEAR is that TSA Precheck offers some of the same benefits and is much cheaper ($85 for 5 years).  For infrequent travelers, the cost differential is likely too great.

But TSA Precheck simply isn’t as reliable. As more and more people enroll in TSA Precheck (and as TSA allows a random selection of additional passengers to use the lines), the Precheck lines aren’t always that short in many airports. You also can’t count on getting Precheck every time. Sometimes Precheck is taken away from you on a particular trip as part of the random screening process even if you have paid for the service. There’s no such risk with CLEAR. If you need the certainty of a short line (which in actuality is no line), CLEAR is the only service that provides it. I could see frequent flyers getting plenty of value out of both services together. 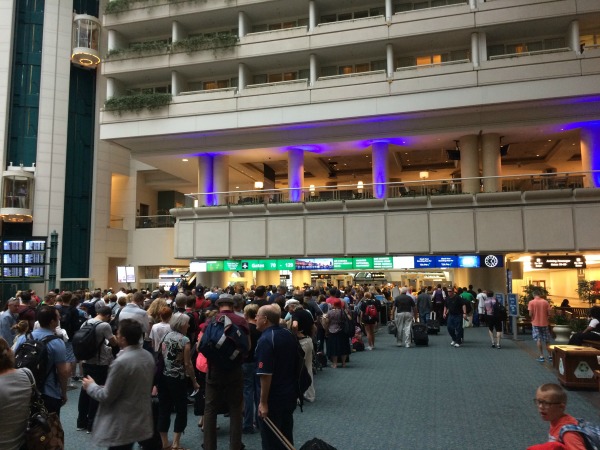 What the regular TSA line at Orlando looked like without CLEAR.

CLEAR has the most value for people who are based in a city that has one or more CLEAR airports. As a Bay Area based traveler, CLEAR works fairly well for me at home with two of my three home airports served (although I do wish my closest airport of OAK was on the list too). It also serves several destinations I visit often (like Orlando).  There are a few other airports where I think CLEAR is especially valuable for flyers based in the area. In particular, CLEAR in Denver and Orlando – two airports known for truly heinous airport security lines – is a game-changer for flyers based there. Even if you don’t live in a CLEAR city, think about where you travel most often. If frequent Disney vacations are in your family’s travel plans, CLEAR could make sense for your return trips from Orlando. Having recently used the CLEAR lines twice in Orlando, I can honestly say those two uses were my favorite because the lines were the worst I’d seen all year in any airport anywhere!

But there are a quite a few obvious holes in the CLEAR network, most notably busy airports like JFK, LAX, IAD, and ATL. Adding at least one or two of those major airports would improve the value of CLEAR tremendously for many travelers (both business travelers and family ones). I’m keeping my fingers crossed that CLEAR continues to expand (and I’m putting in my vote as a Southern gal for ATL to be first on the list!).

In short, CLEAR has a ways to go to be the solution to all your TSA line woes because of its limited availability and high cost for infrequent travelers. But is it very, very promising and already very useful for some travelers.

Disclosure: CLEAR provided me with a complimentary membership for review purposes.  As always, all opinions are my own.

You are paying to cut the line. Period. CLEAR does absolutely nothing else and you get a normal screening once you cut the line. If you feel good about that , so be it.

[…] lines if you have status on the airline you are flying. SFO is an airport that is also served by CLEAR, a paid trusted traveler service that allows you to cut even more of the […]

Wow, that regular TSA line at Orlando looks awful! Thanks for this review. I think I've come to the conclusion that our family doesn't travel enough to make the service a good value, but it's great to know something like this is even available. I also checked out your thoughts on whether to buy that extra seat when flying with your baby, which was very helpful. Thanks!