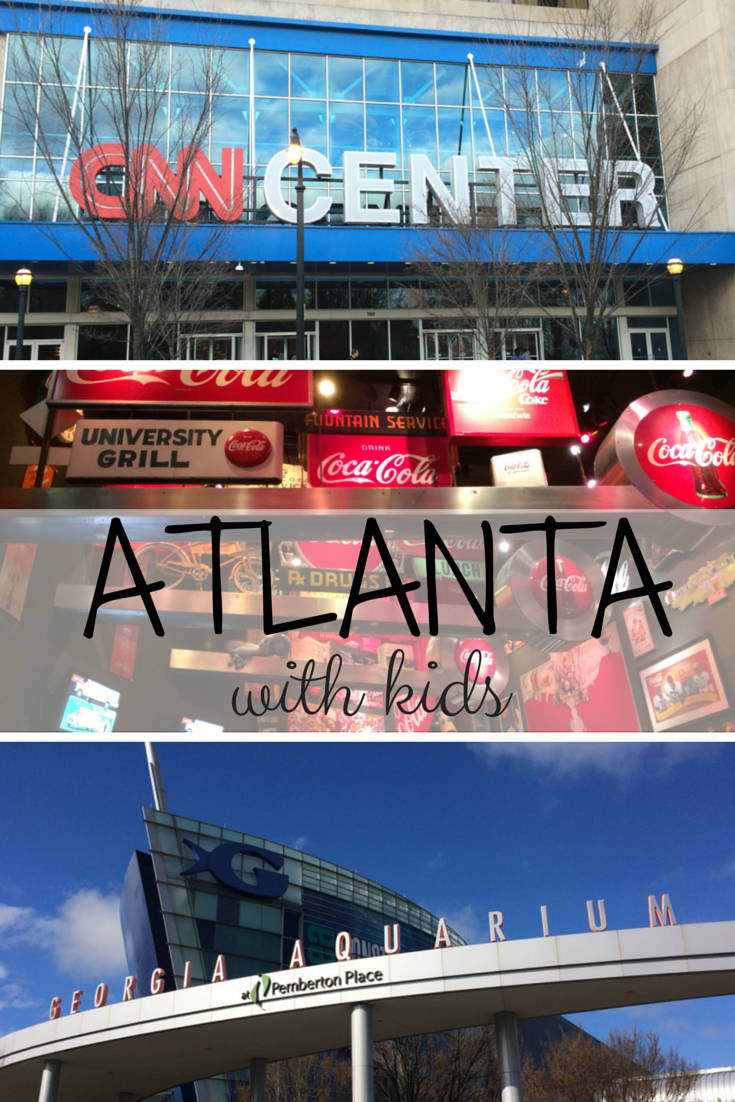 Growing up in Alabama, the city of Atlanta, Georgia was “the big city” to me. For most Southerners, Atlanta was where all the culture, action, and excitement was. It was the place we went to shop for a special occasion or to see a sports team play (Go Braves!). We were perhaps a little jealous of the cosmopolitan lifestyle of those who lived there, but then counted ourselves lucky not to have to fight all that Atlanta traffic.

When my family’s Christmas travel schedule this year presented us with the chance to spend a night in Atlanta, I decided it was time for my kids to experience the big city of my youth. Atlanta has changed a lot since I’ve spent much time there. The 1996 Olympics took place between my junior and senior years of high school, and that legacy really transformed substantial parts of the city.

With only a day and a half to see the sights, we focused our travel plans around Centennial Olympic Park. That area of the city has a number of kid-friendly museums, activities, and events as well as plenty of Atlanta hotels at a variety of price points. The major tourist attractions were all quite crowded in the week between Christmas and New Year’s day, but we generally enjoyed ourselves in spite of the crowds.

What to Do in Atlanta with Kids:

The World of Coca-Cola 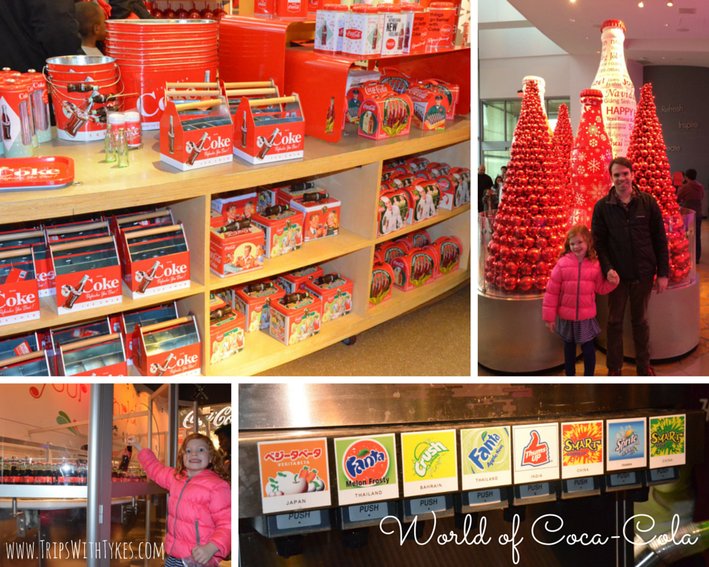 What kid doesn’t like Coke? While our 5 1/2 year old has only sampled it a few times, she is well aware of its appeal (confession: Mom might have a 2-3 Diet Coke a day habit). The World of Coca-Cola (a.k.a. the “Coke Museum”) hosted my family during our visit. Their tour starts with an inspiring video and then empties visitors into a central area of the museum to take a self-guided tour of several exhibits. Exhibits include a bottling demonstration, historical Coke memorabilia, and a vault where the top secret formula is stored. Our daughter’s favorite was 4D movie where the seats in the theater move along with the action. 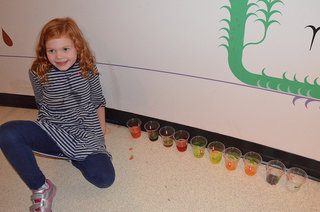 I think she tried a few too many flavors, but she had fun!

The World of Coca-Cola is best known for its tasting room.  Here, visitors sample Coke products from around the world. Most of the flavors I tried were pretty bizarre, but several of the kiwi flavored choices were quite delicious. Our daughter enjoyed creating a rainbow of Coke colors with all the samples she grabbed.

A visit to the museum ends with a free bottle of Coke to go. Last but not least is an extensive gift shop where you can buy nearly every Coke-branded product you can possibly imagine. 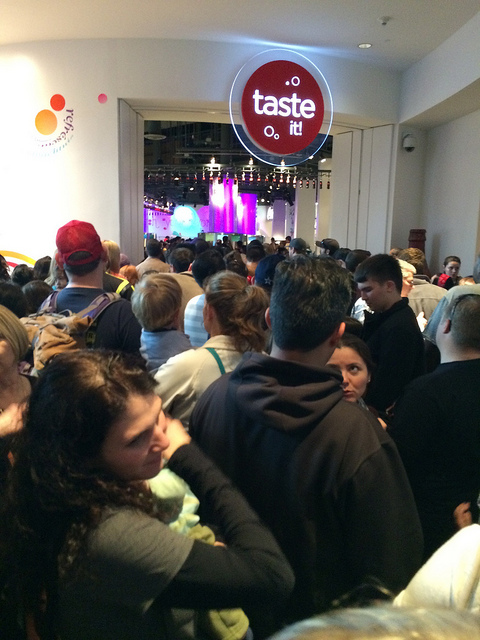 The line to get into the tasting room during our visit – yikes!

While we enjoyed many aspects of the museum, I must offer an important word of warning to other families considering a visit. My family visited at 3 pm on a Sunday during the holidays and encountered serious crowds. It took nearly 40 minutes just to be admitted into the museum. Once we were in, we were then cheek-by-jowl with fellow (often very pushy) tourists while visiting all the exhibits. Getting to the drink dispensers in the tasting room was even a challenge. The crowds definitely inhibited our ability to see the exhibits in a reasonable amount of time and limited our enjoyment of what was otherwise a fascinating museum. I advise going earlier in the day on a weekday to avoid the crowds. 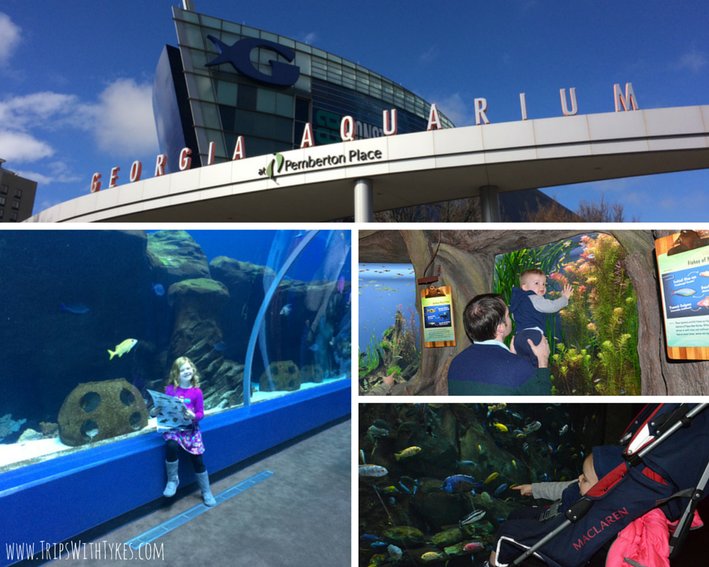 Next door to the World of Coca-Cola is the Georgia Aquarium, which is another must-do in Atlanta with young kids. Living not far from the world-famous Monterey Bay Aquarium, my standards for aquariums are pretty high. The Georgia Aquarium (which hosted my family) amazingly met and even exceeded those expectations. The exhibits are well laid out with lots of areas for kids to explore, crawl, and climb.  Our 5 1/2 year old daughter was mesmerized by all that she saw, most especially the giant manta rays visible from an underwater tunnel.

While we visited, we had a chance to see AT&T Dolphin Tales, the dolphin show in the aquarium’s large auditorium which is included in the ticket price for the aquarium. It is definitely one of the better dolphin shows I’ve seen and worth the wait. The aquarium used to pass out tickets to the show at the information booth, but the policy is now first-come, first-served. We had to arrive 30-40 minutes before show time to guarantee ourselves a seat. While we ultimately had no trouble getting in, it was a crowded and long wait for young kids.

We also had the chance to explore a new attraction at the aquarium: Aquanaut Adventure.  This exhibit is an interactive treasure hunt of sorts. Assignments are given via iPad and your kids have fun walking through various exhibits and completing learning tasks along the way. Best of all, the attraction is upstairs away from many of the crowds.  It was a welcome break during the middle of the day.

Like the World of Coca-Cola, the Aquarium was packed in the early afternoon. We definitely dodged a lot of the crowds by arriving as soon as the aquarium opened for the day, and I’d recommend you do the same. 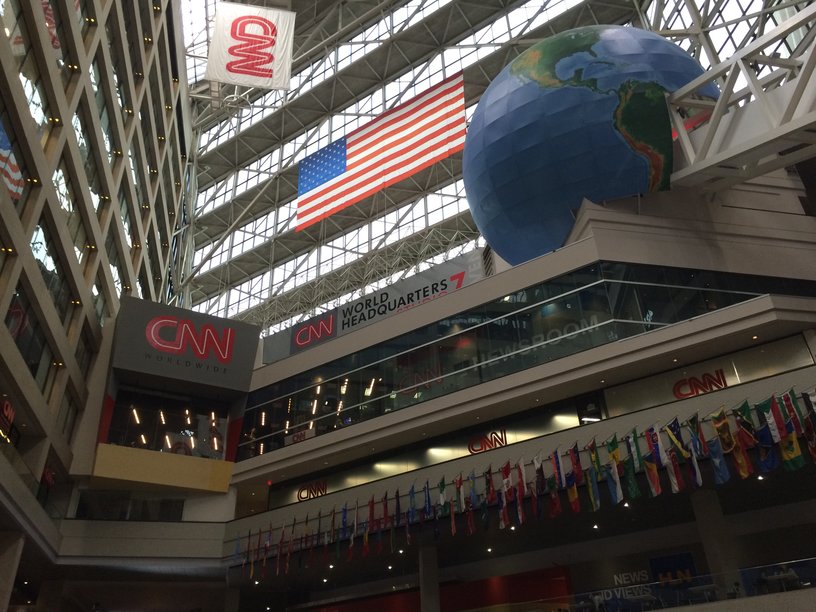 We also spent a little time in the CNN Center during our visit, and it is also quite kid-friendly. The CNN Center features dining, shopping, sports arenas, and of course, the headquarters for the world famous news channel.

The CNN Center offers a one hour studio tour throughout the day. Crowds unfortunately stymied our plans for a visit. We arrived after lunch on our second day to purchase a ticket for an afternoon tour, only to find tours sold out for the entire day. I’d advise getting tickets well in advance; the CNN tour website actually recommends making reservations more than 24 hours before your visit. 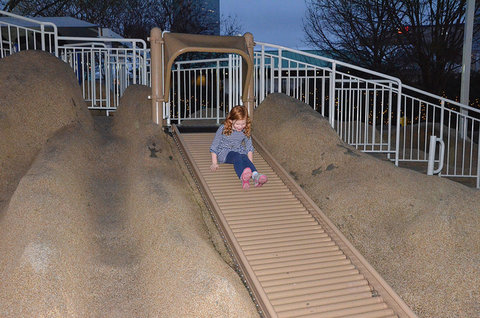 After a lot of time inside museums, our daughter greatly enjoyed a little time outside during some unseasonably warm winter weather. Across from the World of Coca-Cola and Georgia Aquarium in Centennial Park are several kid-friendly playgrounds that were a big hit. During the winter, there is also a seasonal ice rink in the park. 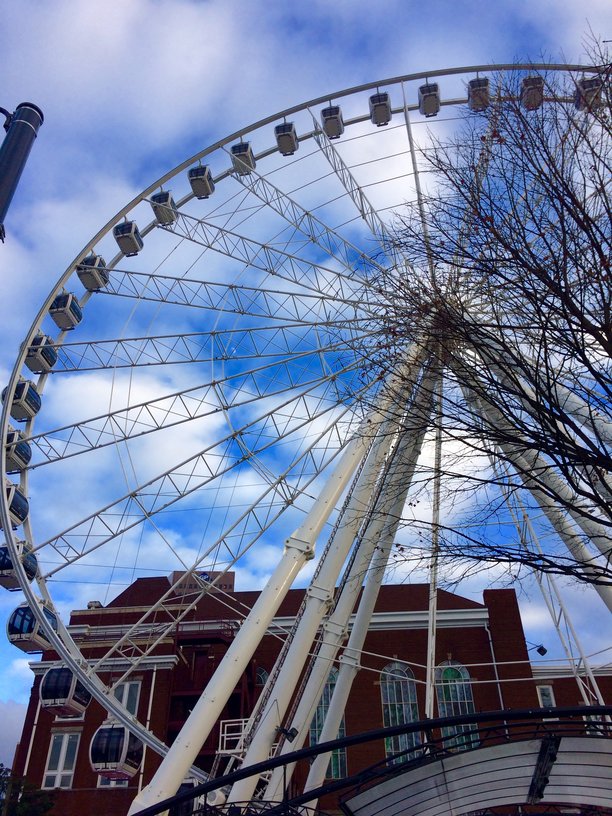 We ended our short trip to Atlanta with a birds-eye view of the city aboard a giant Ferris wheel, SkyView Atlanta. We waited about 30 minutes on a busy afternoon, which was about what we anticipated. The ride itself was about 10 minutes and afforded some breathtaking views of the city and the park below. I must admit that I was not expecting to feel that I got my money’s worth for this short ride (tickets are $13.50 for adults and $8.50 for children), but everyone in our family was quite glad we had taken that financial leap of faith.

Have you visited Atlanta with your kids? What are your tips for the attractions around Centennial Park?

Disclosure: The World of Coca-Cola and Georgia Aquarium provided complimentary tickets to my family during our visit. As always, opinions are my own. 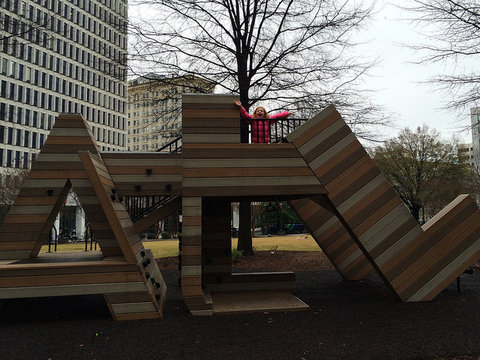 Beating the Crowds While Traveling with Kids - Trips With Tykes

[…] family just returned from a quick trip to Atlanta in the few days after Christmas, where we pretty much dealt with non-stop crowds.  While we still had lots of fun, we definitely […]

These are a great way to sample atlanta! I will show you some of the lesser known awesome parts of atlanta sometime when you come back :)