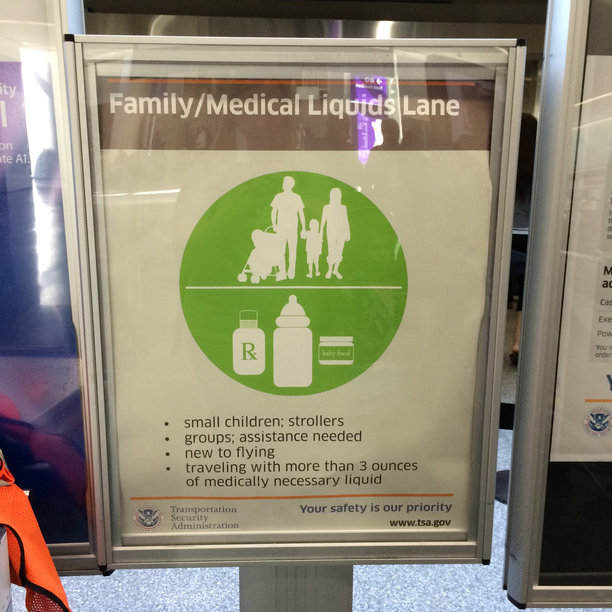 Like many frequent travelers, I’ve found clearing airport security to be a bit of a challenge with a little one in tow.  Most of the hassles do not come from my toddler, however.  They come from the TSA — the oh-so-bright folks who create the maze of contradictory, unenforced, overinforced, and misenforced rules that govern US air travel today.  Can you tell I’m not much of a fan?

One of the biggest frustrations I hear from my friends who travel with children is that they are told a different story every time they travel about the liquid exemption.  For the uninitiated, the TSA restricts you to carrying aboard one quart sized Ziploc bag containing all your liquids and gels.  Each of the items in the bag must be in a container that is smaller than 3.4 ounces.

If you are traveling with an infant or small child, however, there are exceptions to the liquid restrictions.  You are allowed to bring milk and juice in sizes exceeding 3.4 ounces if you bring them in “reasonable quantities.”  Those items may be subject to extra screening.

The current rules on TSA.gov are as follows:

Medically necessary liquids and gels, including medications, baby formula and food, breast milk, and juice are exempt from the 3-1-1 rules, and are allowed in reasonable quantities exceeding 3.4 ounces (100ml). They are not required to be in a zip-top bag. Officers may ask travelers to open these items to conduct additional screening and passengers should declare them for inspection at the checkpoint.

Please be advised that passengers going on long trips should only carry on the medically necessary liquids and gels needed for their infant/toddler’s immediate comfort during the flight. Please pack larger amounts of liquids for the remainder of the trip in a checked bag.

I’ve personally experienced a huge variance in enforcement of the liquid rules.  In most major cities, you will probably find that you can pass right through security with no questions and no additional screening even when carrying filled sippy cups or juice/milk boxes.  In some instances, a TSA official has asked to further screen the liquids (TSA has a little test strip that they wave over open sippy cups or they will wipe down the outside of sealed containers).  The process of this extra screening only takes a moment.

But things can be stickier in smaller airports where TSA officials have less experience.  I’ve had snafus at Montgomery, Alabama, Kona, Hawaii, and even once in the SFO United Premier security line.  In some instances, the TSOs will want to open your sealed juice boxes and milk, which will render them useless.  When I’ve refused, they’ve resorted to requiring me to undergo the dreaded full body patdown instead.  I’ve never had to surrender the milk or juice, but I’ve also had to pay a price for that.  Be prepared to have to do the same if you really need your liquids.

Also, be prepared for some TSOs to make up special rules of their own.  I had one TSO tell me that the milk and juice exemptions applied only to infants and that infants meant two years and under (my daughter was three months past her third birthday).  She even told me to go to tsa.gov so I’d “know the rules next time.”  Of course, I knew the rules cold.  I knew that they referred to “small children” and “toddlers” too and had no mention of a two year cutoff.  But I didn’t have a printout to show her.  Next time, I plan to bring a printout along just in case.

There are lots of horror stories from several years ago about travel with breast pumps and breast milk.  Stories like making a mother taste her own pumped milk and the like.  Rest assured that things have gotten much better.  I traveled with both a pump and milk on a half dozen occasions and was never questioned or subjected to additional screening.  At most, you should hopefully only expect to encounter the test strips.   TSA officials seem to have actually gotten training on this matter after all the bad publicity.

The only caveat is that I’ve heard that nursing mothers traveling WITHOUT their infants have had some problems in bringing through pumped milk.  I never traveled alone while nursing, so I’d be especially interested to know about the experience of others.

Adults still have to remove their shoes before going through the security scanners.  However, TSA passed a new rule earlier this year that exempts children under 12 from this requirement.  You can keep those toddler shoes on (unless you are me and have a toddler who was so trained in shoe removal before the rule change that she insists on removing her shoes to be like the grown ups…. sigh).

The TSA has been rolling out new advanced imaging scanners in many airports over the past few years.  The good news for those of you who distrust these devices is that you’ll almost assuredly avoid them if you are traveling with an infant or toddler.  The rules aren’t explicit, but they indicate that “any passenger capable of assuming and staying in the required position for 5 seconds is eligible for AIT screening.”  I don’t know about you, but my toddler is unlikely to comply reliably with a request that she stay in one position for 5 seconds!  The TSA must agree because they always wave us toward the standard metal detectors instead.  We tend to carry our daughter through security and the rules also state “parents carrying infants or children cannot be screened by the imaging technology.”

Remember, if TSA requests that your child go through the advanced imaging scanners, you can always opt-out.  This will mean that your child could be subject to the enhanced patdown, so pick your poison.

Please share your own TSA child travel experiences in the comments.

Update (5/9/2013): TSA.gov has updated some of the text on its website, effective January 12, 2013.  Here are the current rules, which are a little more clear, particularly in regards to women traveling with breast milk and without their children:

When carrying breast milk through security checkpoints it is treated in the same manner as liquid medication. Parents flying with, and without, their child(ren) are permitted to bring breast milk in quantities greater than three ounces as long as it is presented for inspection at the security checkpoint. Additionally, empty bottles and ice packs are permitted under these conditions.

…Cooling liquids or gels used to keep medical or infant/child exemptions cold are not bound by 3-1-1 requirements. These items may be presented at the screening checkpoint in a frozen or partially-frozen state…

My first time travelling with my daughter right before she turned 1, the TSA at MHT wasn't going to allow me to bring my powdered formula on board. Luckily I had printed out their own rules and showed him where it said I could take it. He then back peddled and said he had to test it. I told him to do whatever he needed to do, but I was taking it with me. I always recommend printing out the TSA and airline rules.

[…] of the most stressful aspects of air travel with kids is dealing with airport security.  Can you take off your shoes, take liquids and laptops out of your carry-on bag, and fold up a […]

[…] The TSA liquid issue is a matter for other posts, but you should know that if you are traveling with an “infant or […]

Air Travel with Toddlers and Milk - Trips With Tykes

[…] toddlers is deciding how to best transport the milk, juice, or other liquids they need.  Although TSA allows parents with babies and toddlers to bring liquids in excess of  3.4 ounces, the reality is that the process is still far from […]

[…] a testy toddler.  Agents at these lanes are often (but not always) more knowledgeable about the rules for traveling with liquids like formula and […]