I don’t fly American much, but I just booked some flights on American to return home for the Christmas holidays with my husband and three year old.  Little did I know that I would be walking right into one of my least favorite travel-with-kids situations: seat assignment Russian roulette.  I thought that by booking more than two months in advance, I’d have no problem getting at least two, if not three, seats together so my daughter would be with at least one adult on the flight.  I thought wrong.

On one of the legs (SFO to DFW) the only free seats available for assignment are middle seats.  There are a few contiguous preferred seats available elsewhere in the plane, but American wants $29 per seat for those assignments.  As much as we travel, it is hard to justify paying $29 per seat, per flight just for the privilege of sitting next to my three year old.  I don’t want a preferred seat… I just want one next to her. 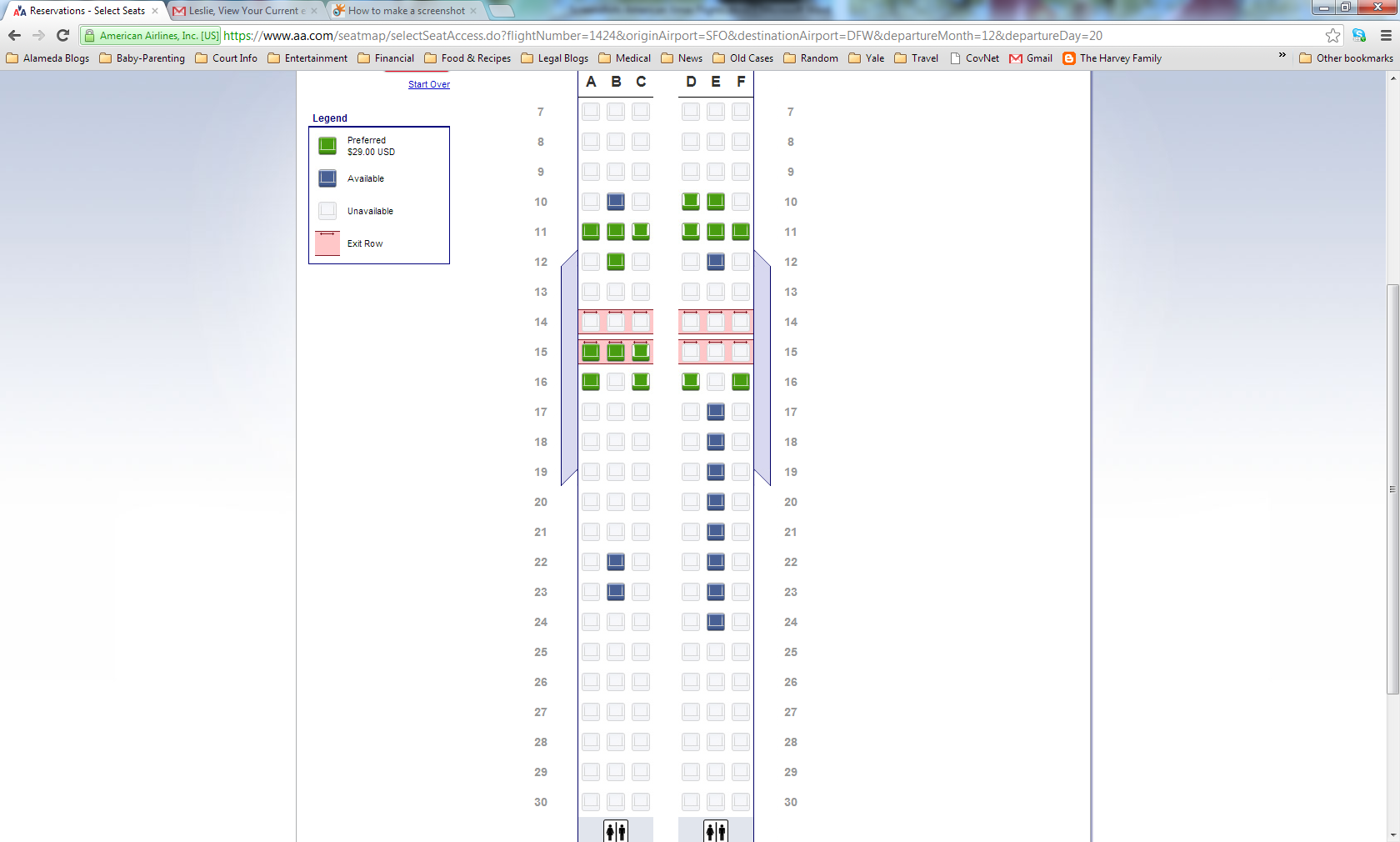 The seating “choices” American presented to me . Green seats are “preferred” requiring $29 per seat in fees. White seats are unavailable. Blue — middle — seats are my only choices.

But the plot thickens.  I asked someone with elite status with American to look at this flight and the seats available to him, and this person was able to tell that most of those aisle and window seats next to the open blue middle seats aren’t actually reserved by anyone.  So, what is happening?  They are being blocked off by American!!  Why?  So that elite travelers who book later can take them free of charge and not be stuck in a dreaded middle seat.  It certainly makes sense for American to want to treat their elites right, but the situation is also ridiculous for families who just want to make sure they can get seats together to care for their children.

American’s preferred seating policies are certainly the most family-unfriendly I’ve seen of all the airlines at the moment.  If you are a United or Delta frequent flier, you are probably familiar with Economy Plus or Economy Comfort seating, where you can get a seat with extra legroom in the front of the plane.  (If you are an elite, these seats are free.  If you are anyone else, you can pay to select these seats.)  But the Economy Plus and Economy Comfort are just a small portion of most planes.  The rest of standard economy is available for the taking.  As long as I book reasonably far in advance, I have no trouble reserving a three seat row for my family on United, Delta, or most other airlines.

No so on American.  American considers “preferred plus seats” to be anything that is an aisle or window seat in most of the front of the plane.  These seats don’t have extra legroom or amenities.  They just aren’t middle seats.  On the flight I booked, the seat map shows Rows 1-25 on a 30 row plane as having these preferred aisle and window seats that I’m unable to book.  That leaves just 5 rows for families or couples to grab contiguous seats.  Since our flight is during Christmas time, rows 26-30 are already booked solid (probably by other families in our situation), so I’m simply unable to get two seats together.

What can families do in these situations?  In my case, I’m going to keep checking the flight on American’s website and snag some seats together if any open up.  There is a chance that some seating will free up 24 hours before the flight when all the elites get upgraded and set in place.  Barring any success in that endeavor, my only hope is to show up a bit early at the airport and plead with the gate agent for assistance.  American’s policy (on the FAQ of the American website) is:

If adjacent seats are not available when you book, American will attempt to accommodate families traveling with a child (age 12 or under) and groups of 5 or more by assigning them adjacent seats, either in advance of check-in or at the airport on the day of departure.

Let’s hope that they abide by that promise!

I did call American’s call center to see if they could do anything manually.  The representative was very friendly, and he did note that it looked like many more of these elite seats were being blocked off than he’s used to seeing.  He wasn’t sure why.  He thought that this meant I would have a fairly easy time at the airport of getting two or three contiguous seats together since so many seats are unfilled in reality.  That’s somewhat of a relief, but I wish that the representatives could do a manual override for families to give us the seats now rather than later.  When traveling with kids, I try to reduce uncertainties as much as possible, and it certainly doesn’t help when the airline policies cause that uncertainty in the first place!

I'm sitting on a A.A. flight with PLENTY of available seats- empty and side by side- but I'm 12 rows away from my parter because I can't pay $64 extortion fees to travel with the person I'm traveling with! These are money grubbing bastard policies from greedy evil people who care nothing about the feelings of their customers in any way shape or form.

So let me make sure I understand, you booked your flights 2 months in advance and there were no seats? I just booked 6 tickets with American Airlines and my family is able to sit together on each leg we have.

Yep. Exactly that. And the flight wasn't even that sold out - the seats were just being blocked/held by AA. They block more seats on some flights based on their models about how many elites take that flight and when they book, etc. So on some AA flights, a lot of seats are blocked until close to time and one others, not many are blocked at all. Entirely luck of the draw for families.

Awesome! this post inspiring me for trip around the world.

[…] Cons: Many old planes (especially on US Airways), seat cramping only going to get worse, difficulty in securing seats together with your child […]

[…] no right way to handle this dilemma, but see my posts on my own personal experience with American and Delta.  I try to get at least two seats together (usually near the back of the plane where […]