You’ve probably noticed things have been a bit quiet around here.  As soon as I completed my last day at my job, my family set off on a week-long vacation to see friends and family in Tennessee and Alabama.  I promise lots of posts to come about all that we saw and did.

But first: the bigger picture.  Now that we have returned, all I can think about is how grateful I am that everyone in our family returned in one piece.  Honestly.  The trip was overall a much-needed and happy vacation, but we also feel lucky to be alive and healthy after all that occurred.  This trip will go down in our family scrapbook as the trip of near-misses.  We came so close to having something truly terrible happen twice.  We and our loved ones dodged the bullet both times. 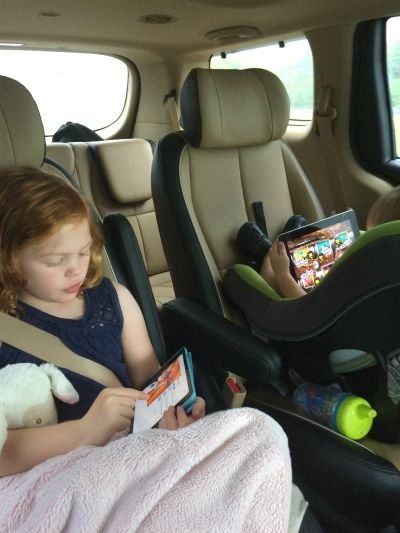 The kids safely in their car seat & booster not long before our near-miss wreck.

The first of these two near-misses happened when I was driving between Nashville and Chattanooga, Tennessee just two days into our trip.  Other than dealing with rain from a typical Southern thunderstorm, the drive was uneventful.  As we neared Chattanooga on I-24, I rounded a blind corner on a downgrade to find traffic suddenly and completely at a standstill.  I slammed on the brakes and had plenty of time to avoid a crash.  I quickly changed into the left lane, realizing that the interstate was about to split and that I needed to be in the left lane to go to Chattanooga.  Traffic was not as backed up in the left lane and I was able to move about 10 car lengths ahead of where I had been in the right lane.

Not more than 30 seconds later, I looked in my rearview mirror to see a tractor trailer jack-knifing, unable to make the same stop that I had just made.  The entire cabin of the big rig turned into a fireball as it hit the cars behind me, one after another.  I couldn’t tell how long the truck would continue the chain reaction of hitting more and more cars as it came to a stop, and I desperately looked for a way to pull on the shoulder to get ahead should it come any closer.  Finally, it stopped just a few cars from us.

The scene was undoubtedly the most gruesome and upsetting car accidents I’ve ever witnessed.  I could see someone getting out of his car unable to stand on both legs and collapsing.  We continued to see smoke and were afraid that the big rig may have been carrying a load of fuel which had caused the initial explosion.  We also saw so many people jumping out of their cars to run to help (with two little kids in our car, we determined we would be a danger to them and everyone on the scene to do the same, but we called and reported everything to 911 immediately).

We were beyond shaken.  All I could think about was that if I had not changed lanes or if we had been just a few seconds later, that big rig would have plowed into us.  Our son slept peacefully through it all, safe in his car seat, but it will be something my husband, daughter, and I never forget. 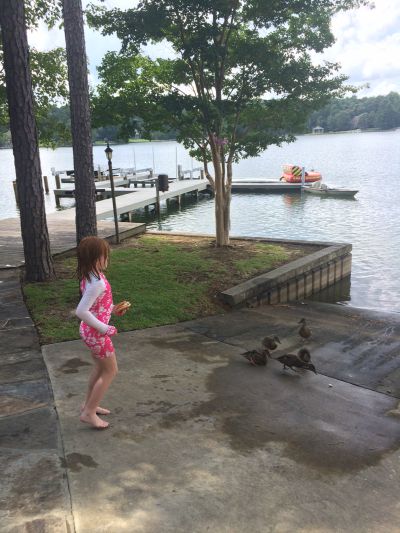 Just a few days later, we continued on our trip to visit the lake home of some dear family friends.  We were readying ourselves the first morning there for a lazy day of swimming and water skiing.  Suddenly, our host slipped walking down a slippery boat ramp, hitting the back of his head hard on the ramp concrete at water’s edge.  He was temporarily paralyzed from the fall and was slipping into the water unable to keep himself afloat.  His wife swam over to assist, but as she was only about half of his size, she was physically unable to move him herself.  All of the rest of the adults were in the house except for my husband, who was playing in the water with our 23 month old son (wisely in a life jacket).  Somehow, my husband had the presence of mind to run my son up to the house and put him in the basement playroom out of harm’s way and still get back to the water in seconds to help our friend.  Others heard the call for help, and we were able to get our friend out of the water and call 911.  We have since learned that not only did he narrowly avoid drowning, but that he also was very lucky not to have been permanently paralyzed from the fall. 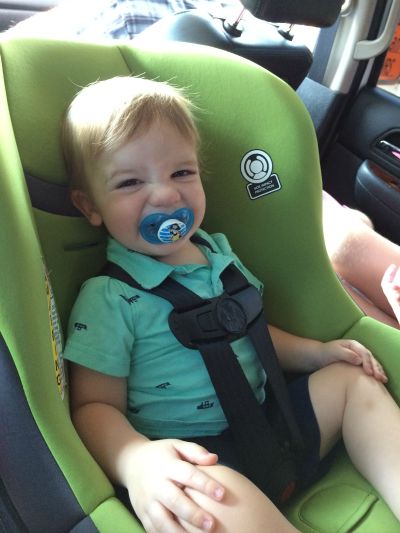 Always going to be strapping the little guy into this for future travels!

Needless to say, I’m very grateful coming out of a trip with two such close calls.  These experiences also reinforced important lessons about travel safety.  Luckily, my kids were in car seats/boosters during the wreck and in life jackets during the lake incident.  Knowing that we had taken the proper precautions helped allay some of my fears.  We can’t control for near-misses like these but we can make sure we have taken all the right steps for our little ones to have the best chance at surviving them unscathed.

Oh my goodness! Leslie, I'm so glad your family is OK. Wow. Life is a precious thing, family too.

Wow! When things like that happen and cause us to reflect, we quickly realize how good we have it. Thank you for sharing your reflection and your attitude of gratitude. I am sure there are many still suffering from that car accident but I'm grateful you are all safe. Also grateful your friend was able to get help quickly. Safe travels to all!