I’ve blogged before about the best ways to survive a skiing road trip from the Bay Area to Lake Tahoe.  I was able to put my own tips to the test last week, as my family took a three day, two night trip to ski at Northstar California. 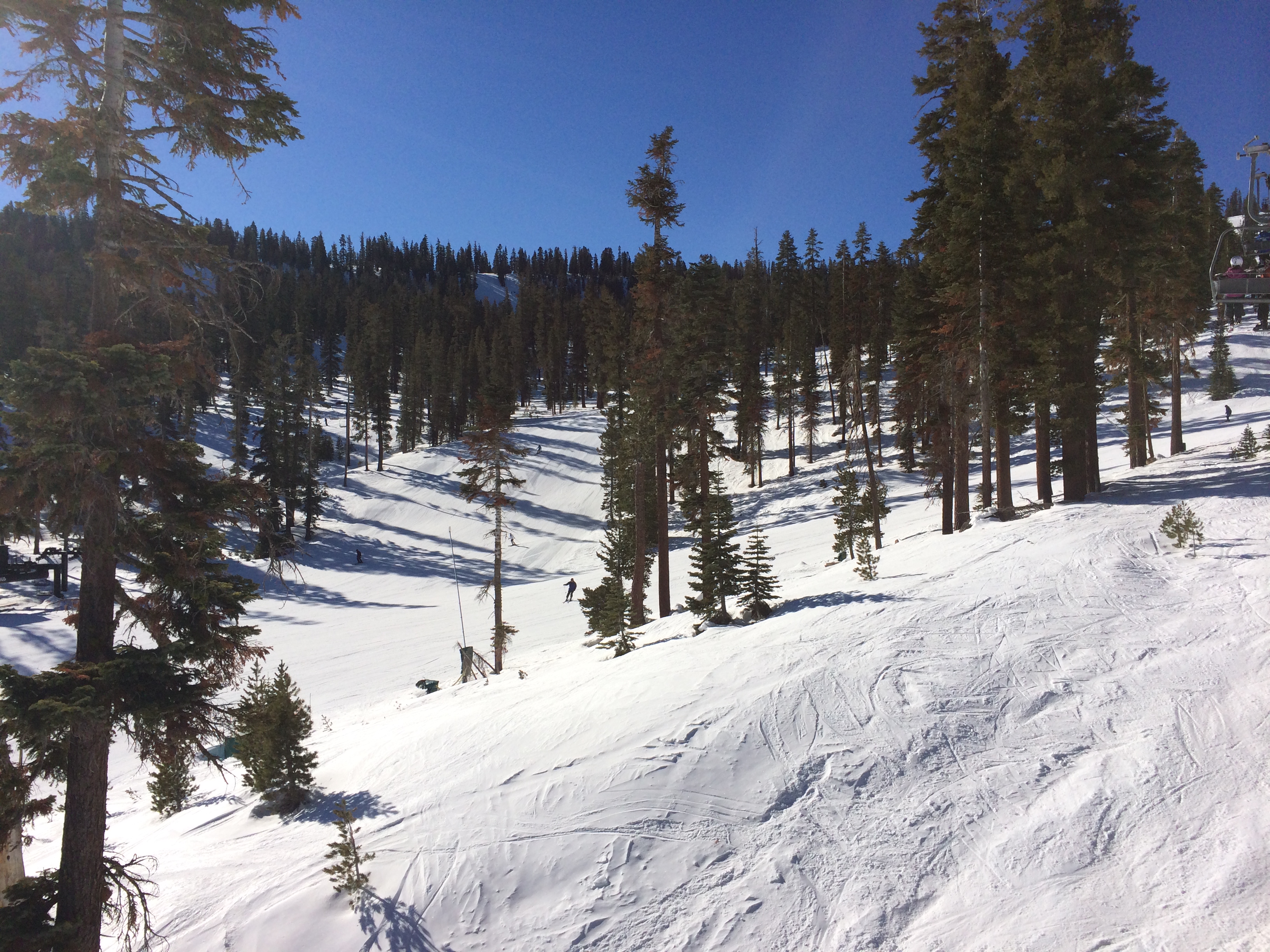 It was a bit of a crazy weekend, for a few reasons.  First, my daughter had been sick the entire week leading up the trip.  We debated whether to cancel, but she appeared to be on the mend on Friday morning when we were going to depart, so we took the gamble.  Second, this was going to be our first time as a family of four sharing a single hotel room.  While we just recently sleep trained my five month old, he still legitimately needs one middle of the night feeding, so we knew there was a good chance that his wakeups would disturb our daughter’s rest.

We left bright and early Friday morning at 9 am from the East Bay.  The drive was a breeze, as my son slept all the way to Truckee because we departed right at his morning nap time.  My daughter happily overindulged in iPad time.  We made nearly record time, making the trip in just about three and a half hours.  It definitely helps to leave earlier in the day on a Friday to avoid the Bay Area and Sacramento post-work ski traffic. 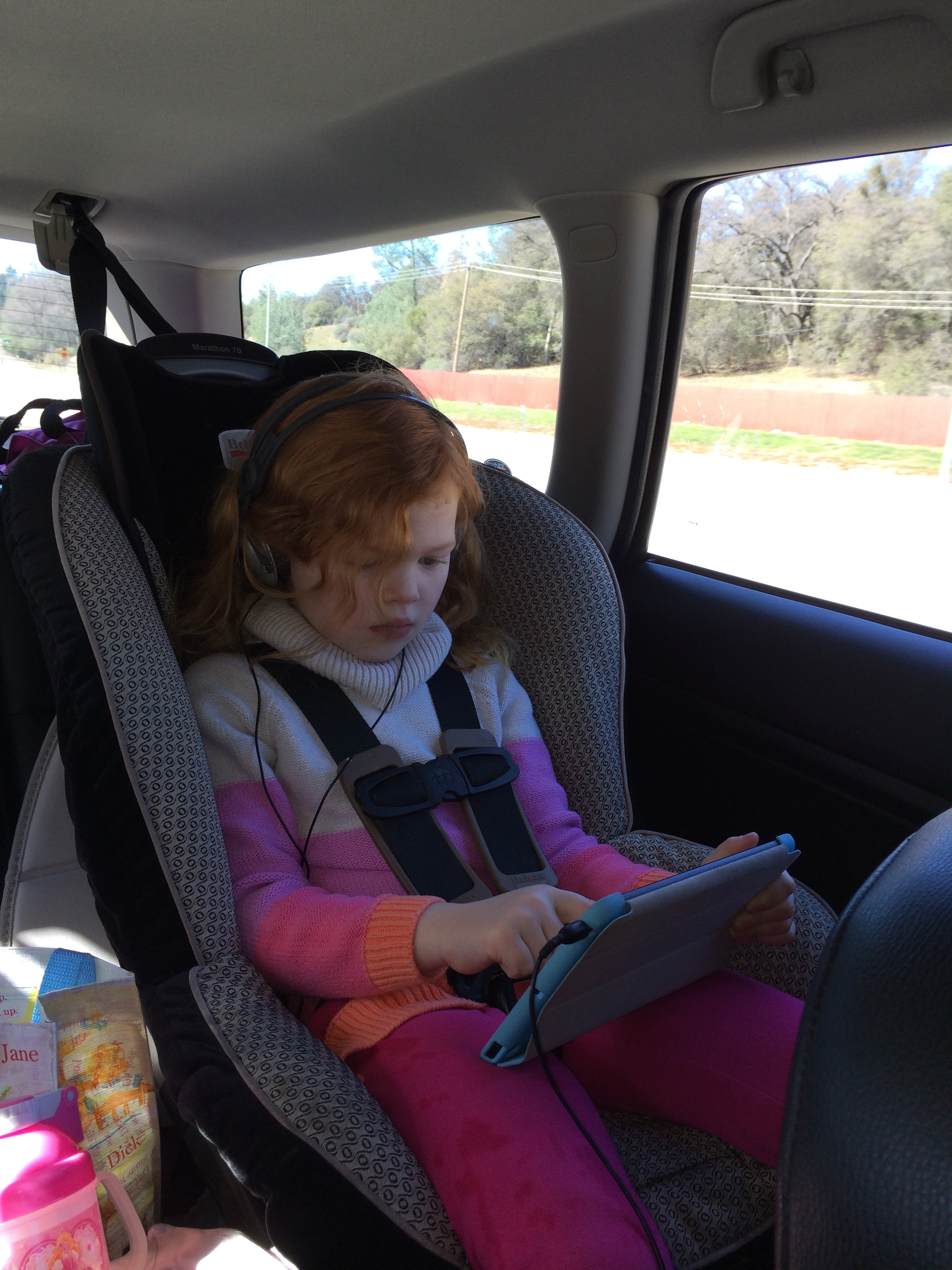 Happily entertained on the drive.

It was a bit disconcerting on the drive to see just how little snow there was in the Sierras, though.  California is having a record-breaking drought and I’d never seen so little snow.  We hoped that the skiing would still be okay, as we had chosen Northstar because they have the best snow-making in the Tahoe area.

We stayed — using Marriott points, of course — at the Ritz-Carlton, Lake Tahoe (hotel review coming soon).  The hotel is truly amazing and truly family-friendly, which is not always par for the course at many luxury hotels.  We saw lots of families with small children, especially because it was the end of the Bay Area schools’ “Ski Week” vacation. 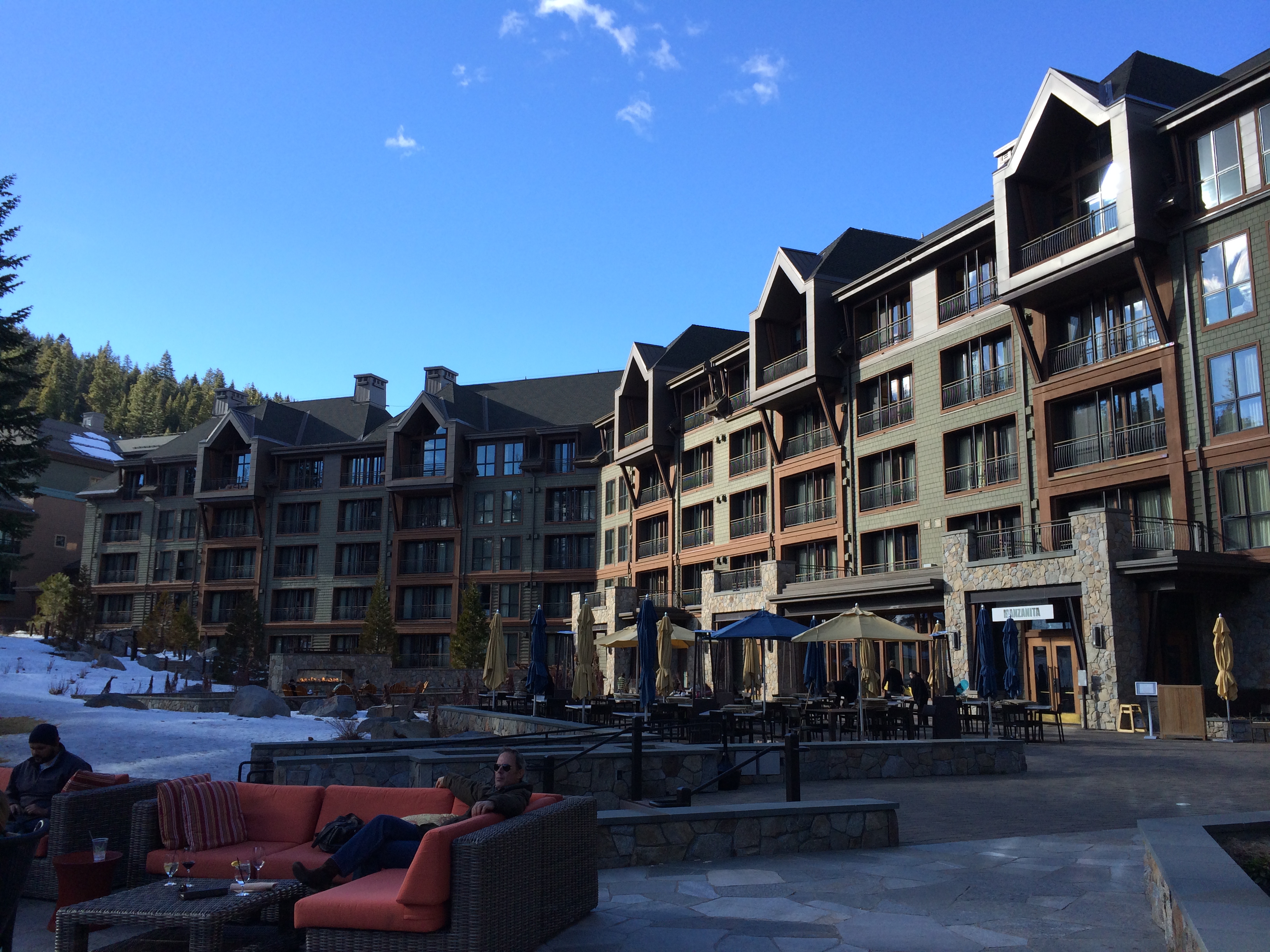 As my daughter still needed some extra time to fully recover from her sickness, we decided to skip any major Friday activities.  While we waited for our room to be ready, we had my daughter fitted for her ski equipment at the rental store, True North, within the hotel.  Then we unpacked in our room and took the gondola into the Village at Northstar for an early dinner.  We ate at Mikuni, the Japanese restaurant there where my daughter chowed down on gyoza, as is her tradition.  Mikuni regularly has an hour or more wait on the weekends, but we went at 5:00 pm and were seated right away. 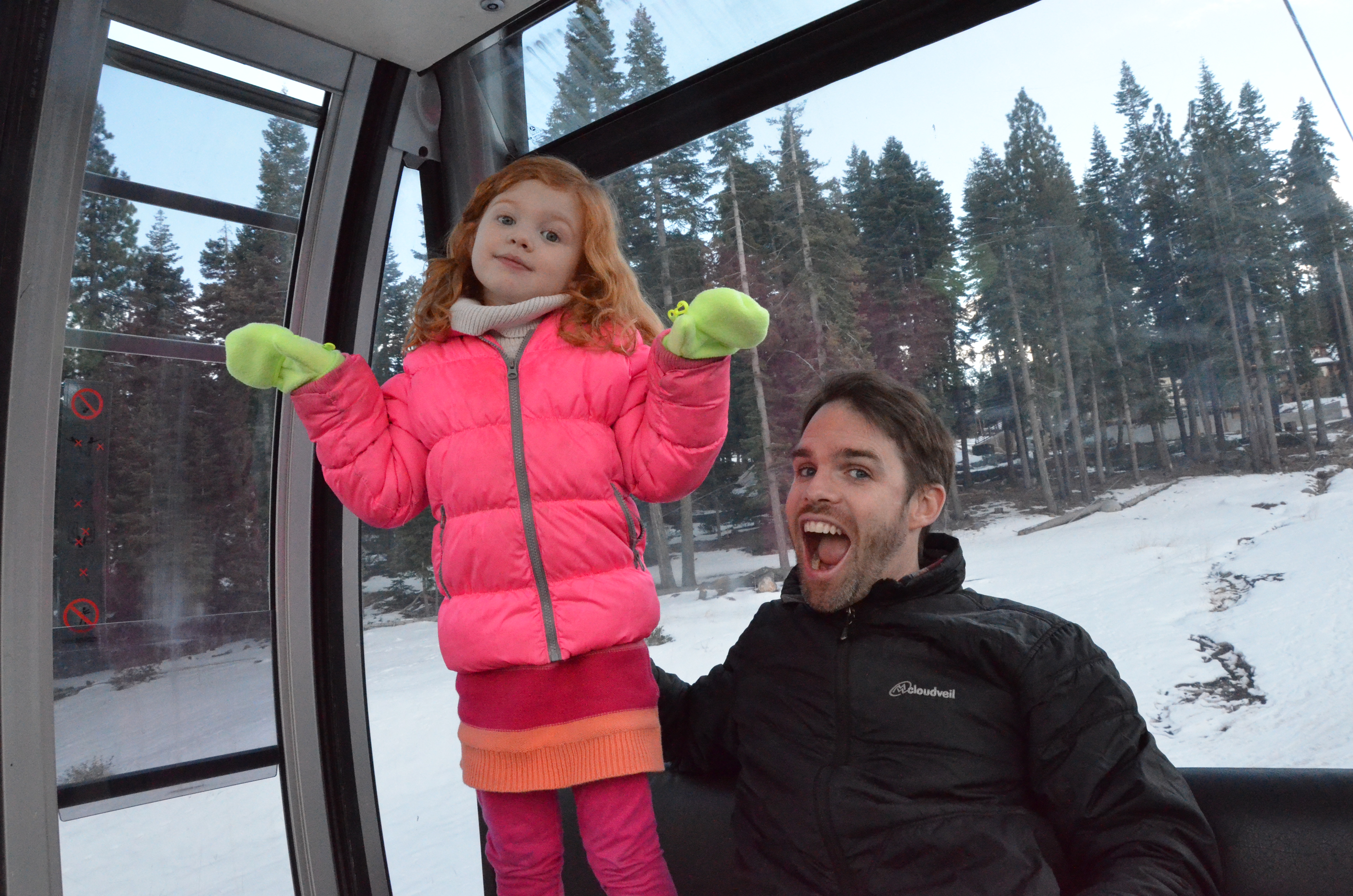 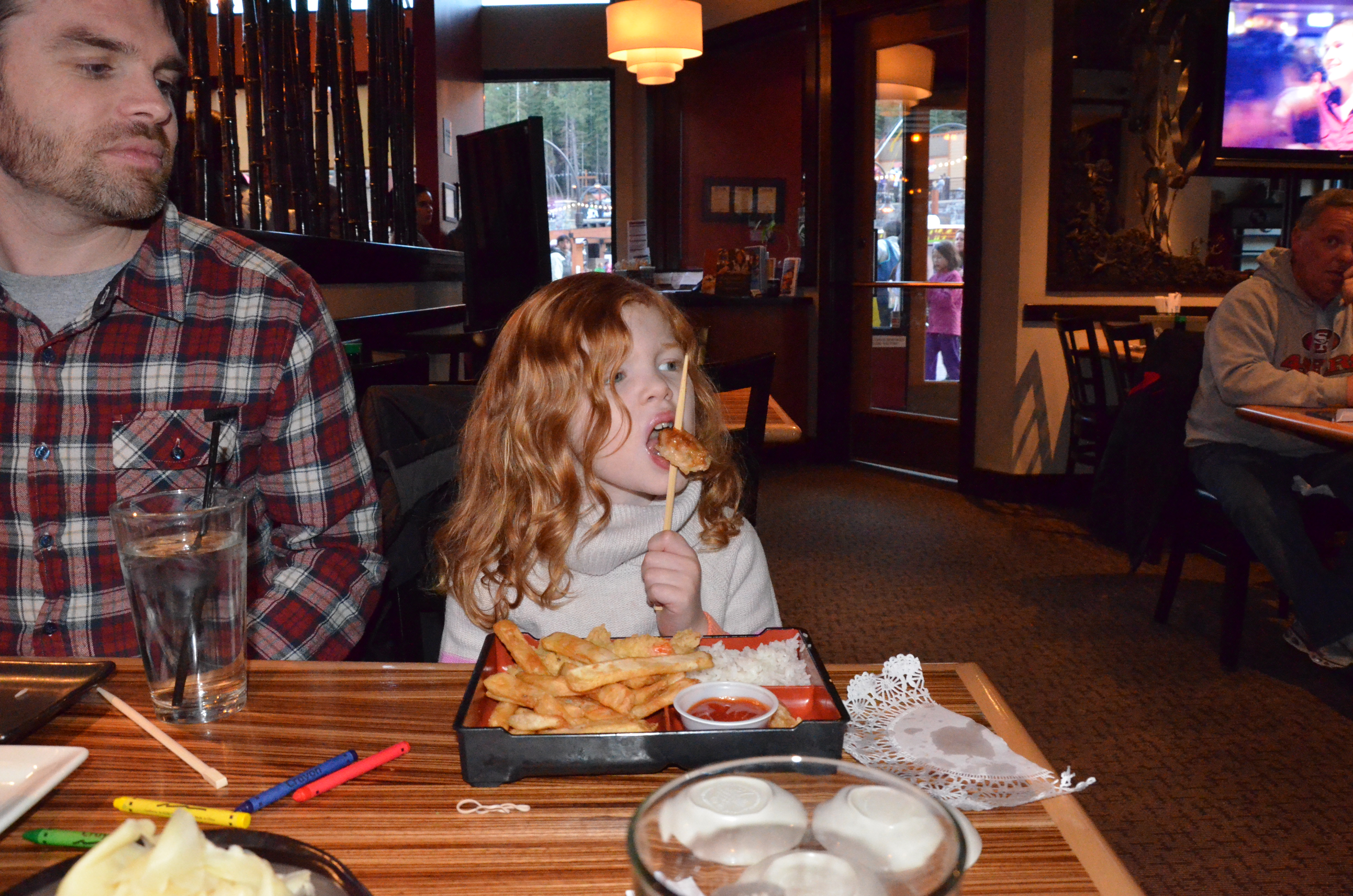 After dinner, my daughter and I went ice skating in the Village while my husband kept the baby warm by the fire pits.  Then it was off to bed at the hotel for our early day Saturday. 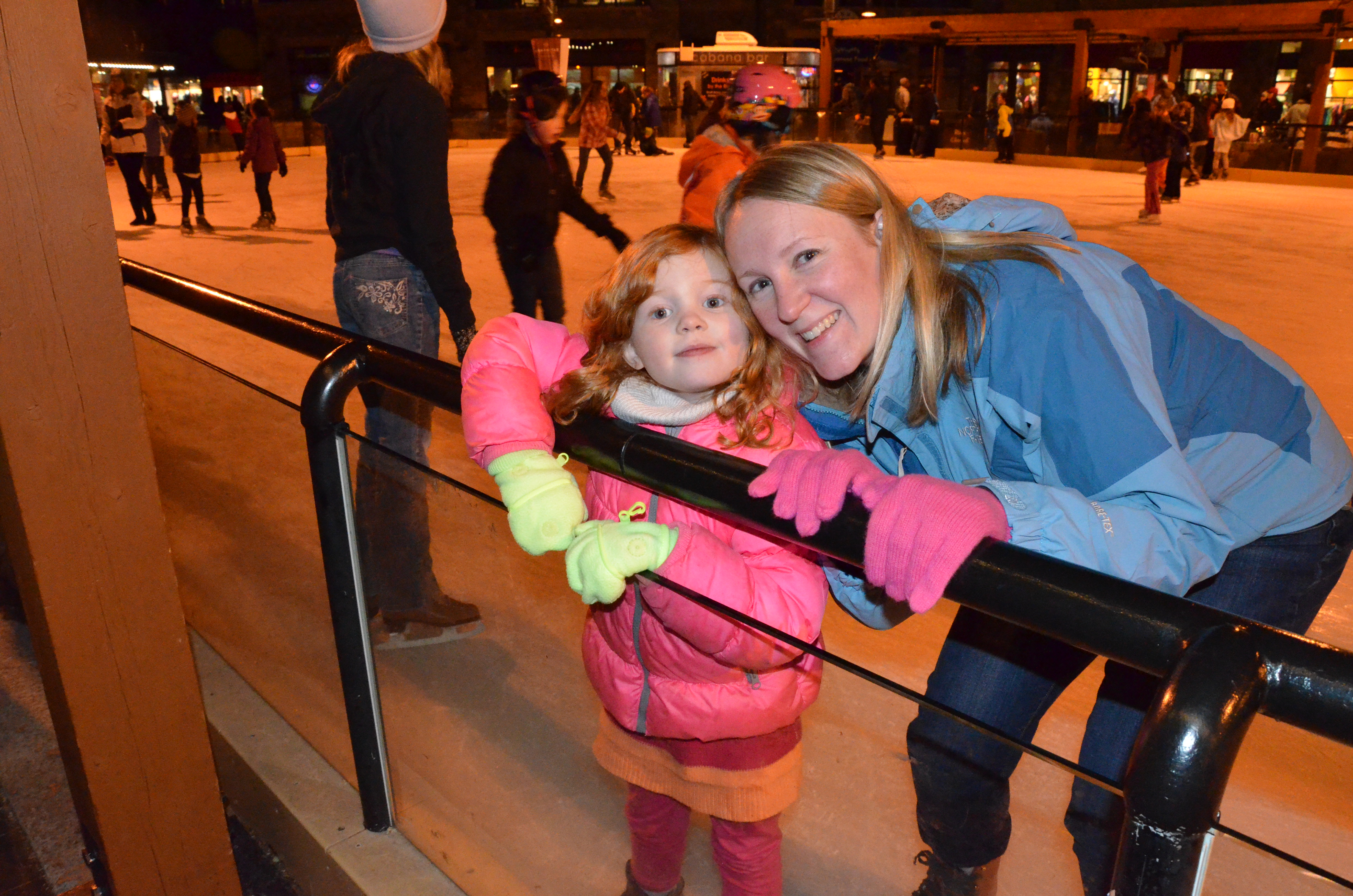 We awoke bright and early Saturday morning (some of us, ahem, awoke a little brighter and earlier than the rest thanks to the baby!) and got dressed for a day on the slopes.  As we skipped Tahoe last year due to my pregnancy, this was the first year that my daughter was old enough to attend ski school.  Northstar only has a full-day ski school for four year olds, and we debated mightily whether our daughter could hang in for a full day.  But it turned out to be a good decision.

We enrolled my daughter in the (expensive!) Ultimate 4 ski lessons that pair one instructor with no more than four children, and she and two other little girls had an instructor all to themselves.  As I stayed in the hotel with the baby while my husband skied, I had a chance to observe her in ski school a bit.  While the children definitely spent plenty of time practicing their skills, they had plenty of down time and fun time as well.  The afternoon cookie and marshmallow break was my daughter’s favorite, and she also built snow castles and snowmen during her time there. 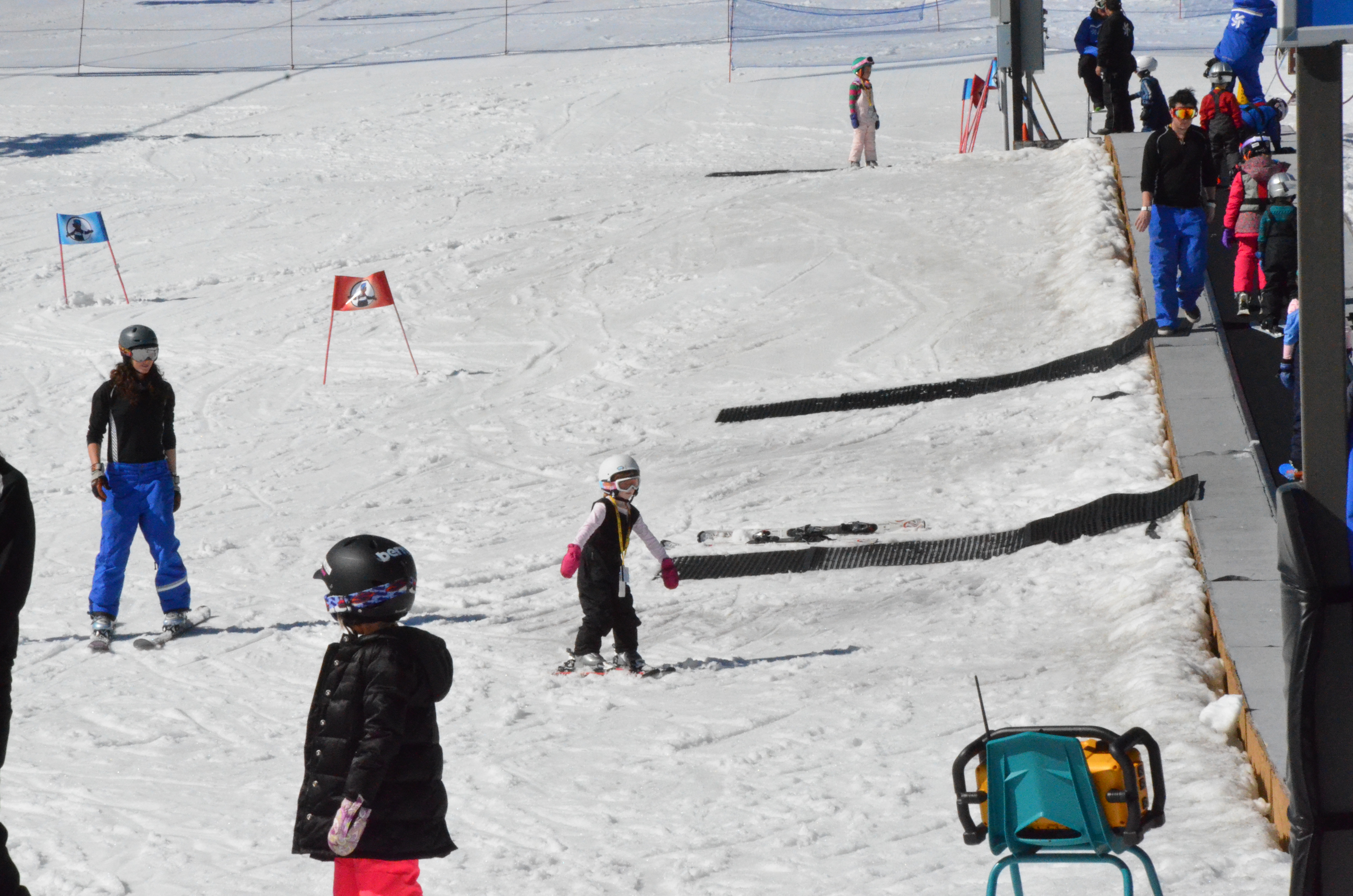 My husband had a full day on the slopes and then joined us for some Saturday afternoon hot tub time.  My daughter had never been a fan of hot tubs in the past, but we had a true convert after this trip.  We then ate a casual dinner in the Lobby at the Ritz, where my daughter promptly passed out at about 6:30 pm from exhaustion.  We carried her back to the room after dinner, and she basically did not stir until 7:30 am Sunday morning.  The baby remarkably slept the best he ever had as well — must be that mountain air! 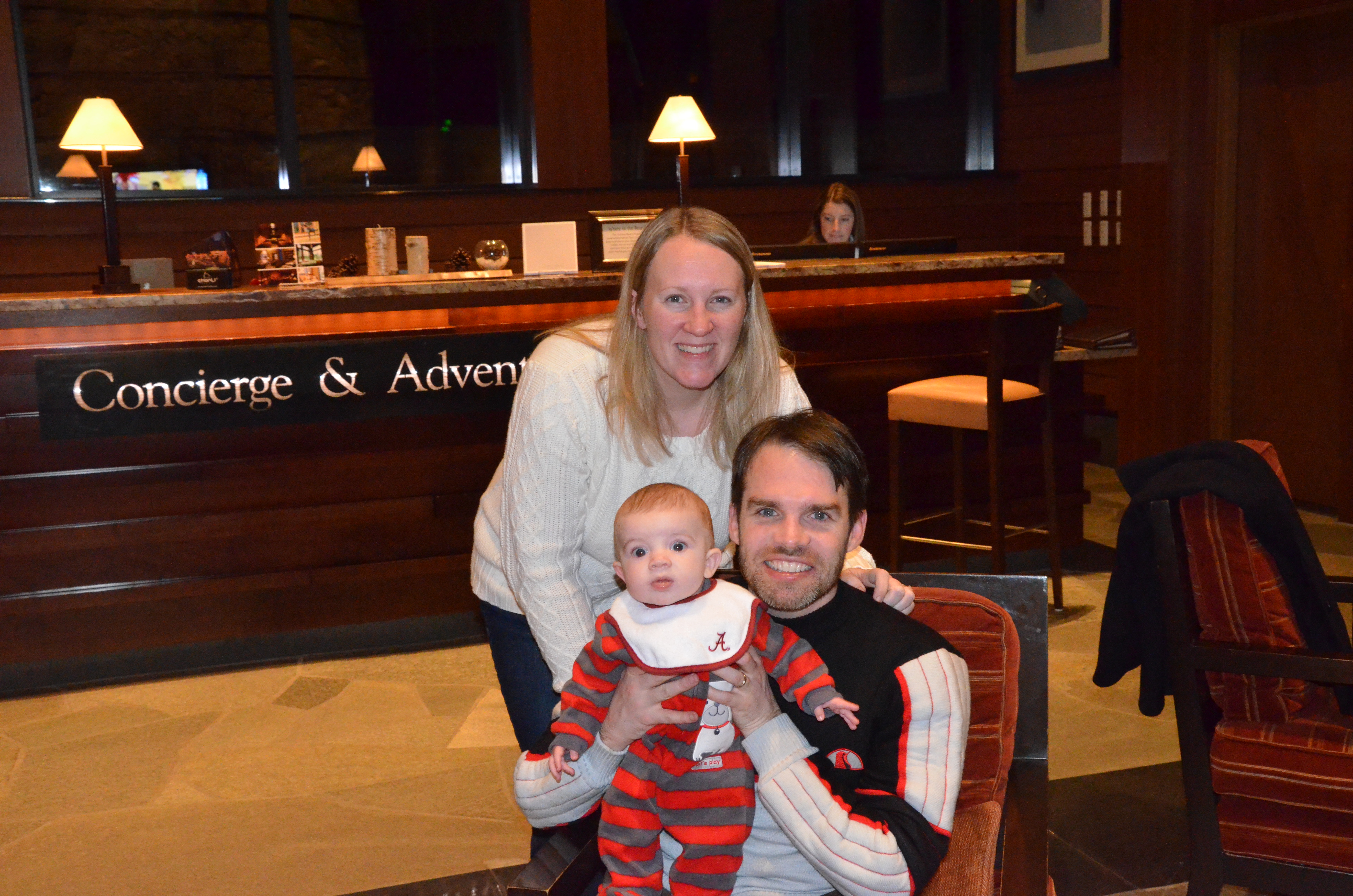 Three of us were awake during dinner… 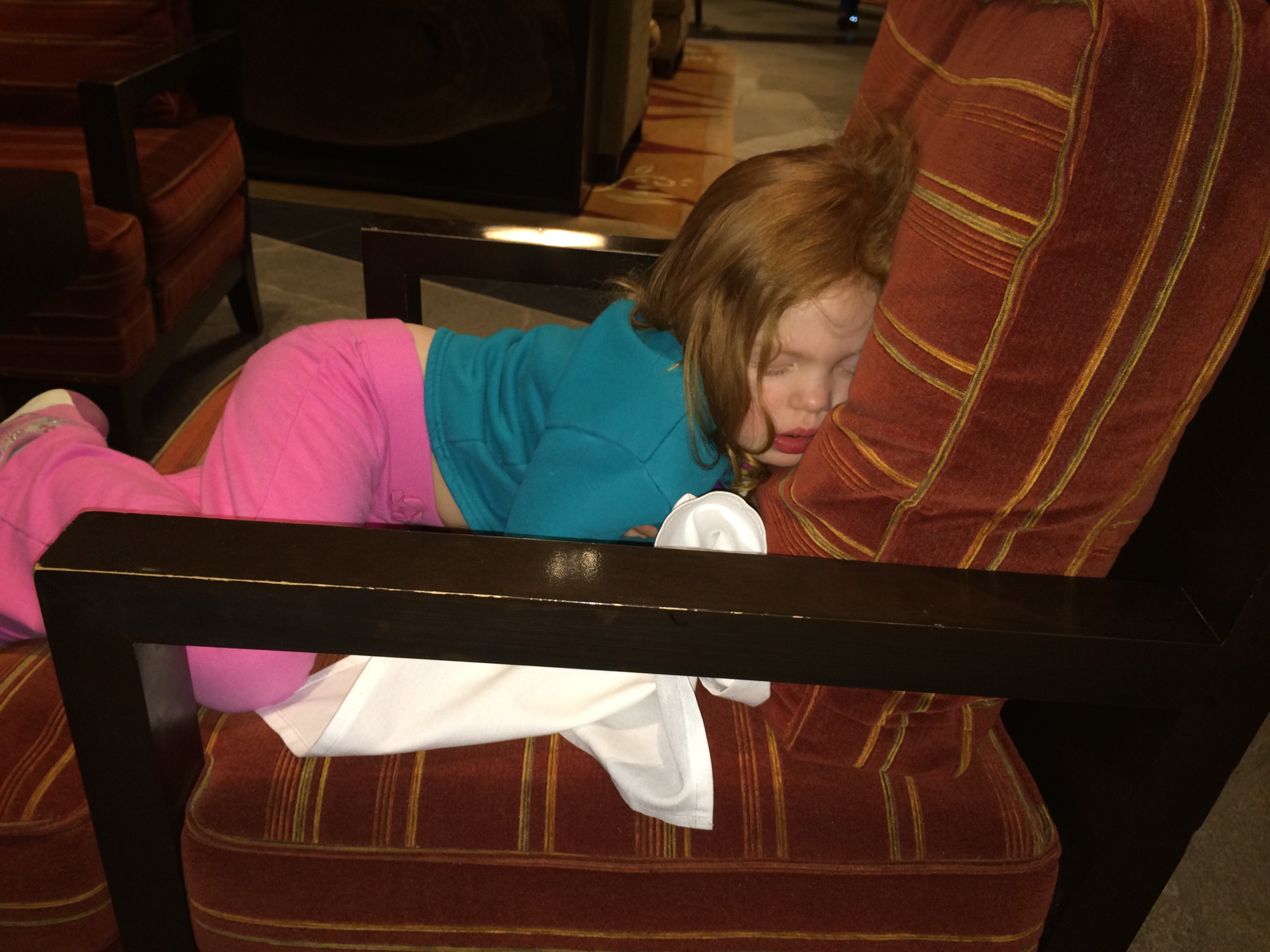 Conked out at dinner, thanks to a full day on the slopes.

On Sunday morning, it was my turn to ski while my husband stayed behind with the baby.  My daughter went to ski school with the same instructor (and this time, there was only one other girl in her group, meaning she had a semi-private lesson).  I found that Northstar had done a great job with the snow they did had — conditions were perfect groomed corduroy all over the blue cruisers on the mountain.  Things got a little slushy near the base as the temperature was probably close to 50 degrees (hurrah for spring skiing with just a layer or two of clothing!), but Northstar’s mountain was still quite skiable.  I skied a few times off of the Comstock lift and then shifted over to the blues and easy blacks on the Backside to avoid the crowds.  I was thrilled and relieved to find that I had not forgotten all my skills after two years.

I went back in to the hotel at lunchtime and switched with my husband.  He skied a few more hours while I packed and checked us out of the hotel with the baby.  I then hung out on the comfortable Ritz-Carlton lobby with the baby and ate a late lunch.  Everyone returned from the slopes about 3:30.  After the skiers got changed, we loaded the car for home. 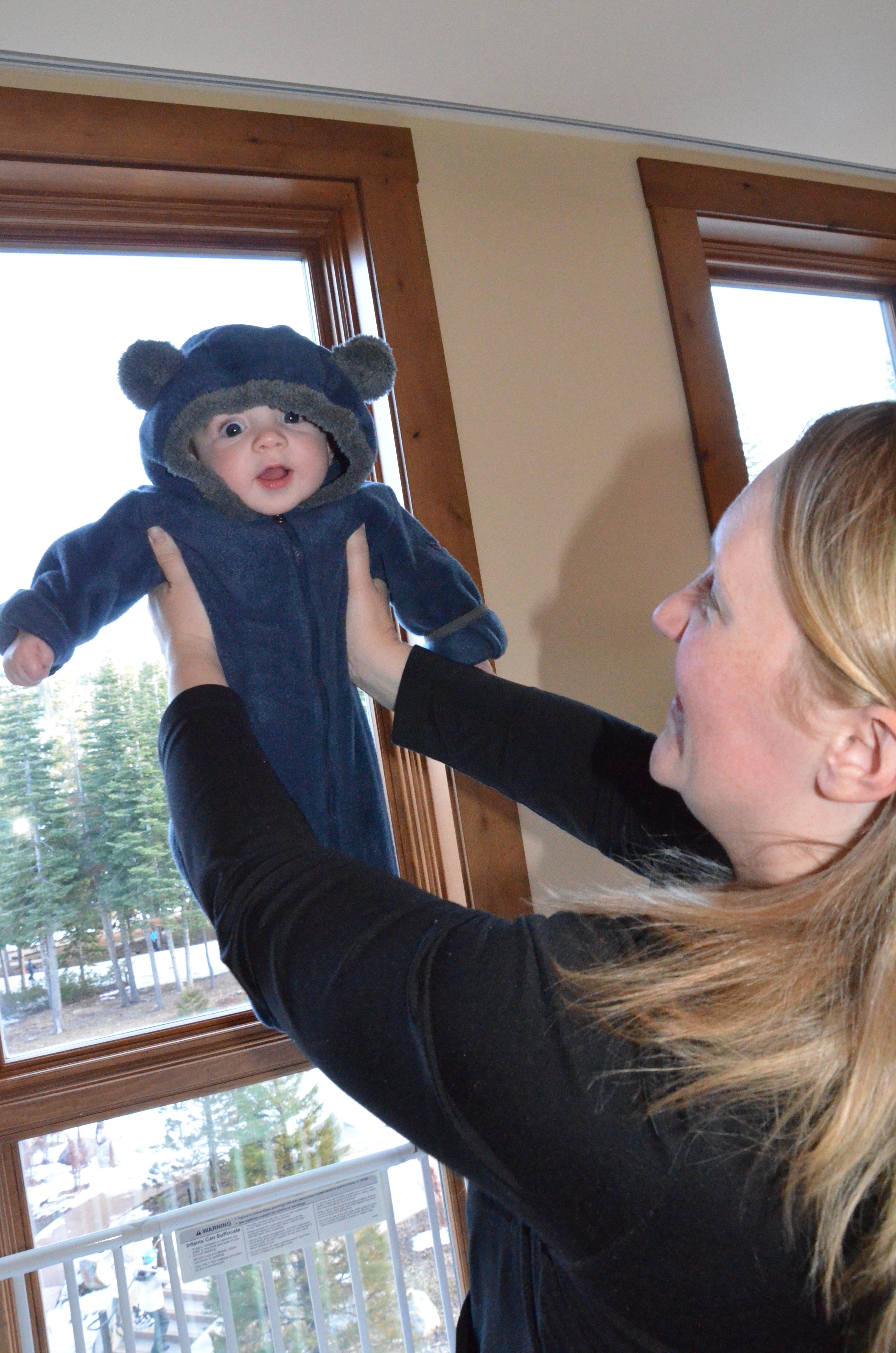 Little one dressed for the cold.

We left at about 4:30, and the traffic report to the Bay Area didn’t look particularly good.  On Sunday afternoons, traffic can often be stop-and-go in many spots and we’ve regularly seen a three or four hour trip turn into five or six hours as a result.  We hoped that things would clear as we made our way towards Sacramento.  We wisely decided to stop for dinner in Auburn and that gave us just enough time for most of the worst traffic to clear.  We avoided some of the worst that remained by driving an alternate route around Sacramento and then were only slowed down once or twice between Davis and Vallejo.  We pulled into our house about 8:45 (less than four hours once we took the dinner stop out).

What a great weekend!

[…] few resorts that stand out in certain ways for skiing families. The bigger resorts like Squaw and Northstar are well-known for having amazing amenities and excellent ski schools, but that comes at a big […]

[…] lift ticket prices are north of $100 at many major ski resorts (my family’s favorite resort, Northstar California, charges up to $130). Ski lodging can also be a major expense, with some hotels, vacation rentals, […]

[…] My family usually likes to travel on a moderate budget, but every now and then, we find opportunities for a little luxury travel.  One of our favorite spots for a splurge is the Ritz-Carlton at Lake Tahoe, which is located on the ski slopes at Northstar California. […]